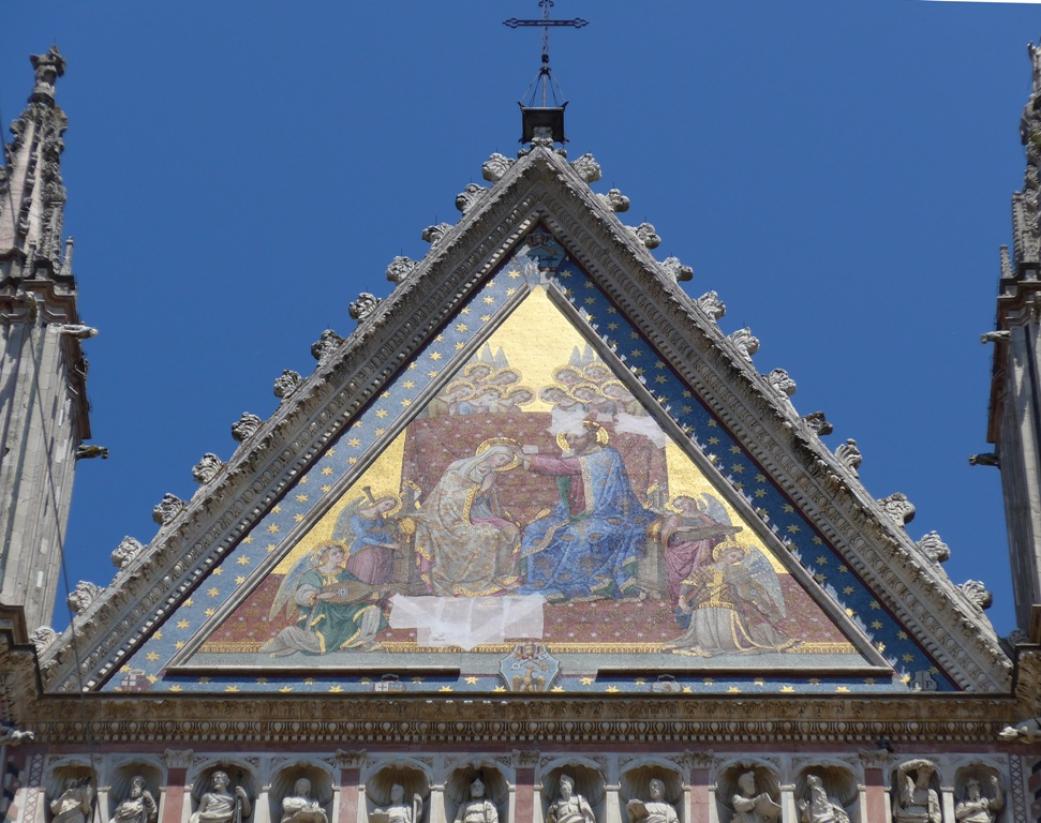 Mosaic at the top of the cathedral depicting The Coronation of the Virgin.

By George Repin
Professor William R Cook, an expert in cathedrals and cathedral architecture, says that the cathedral of Orvieto is regarded by many as “the prettiest Gothic cathedral in Italy”.  However its interior is “lackluster”.  The exterior is striped in white travertine and greenish-black basalt in narrow bands, somewhat similar to the cathedral in Sienna. 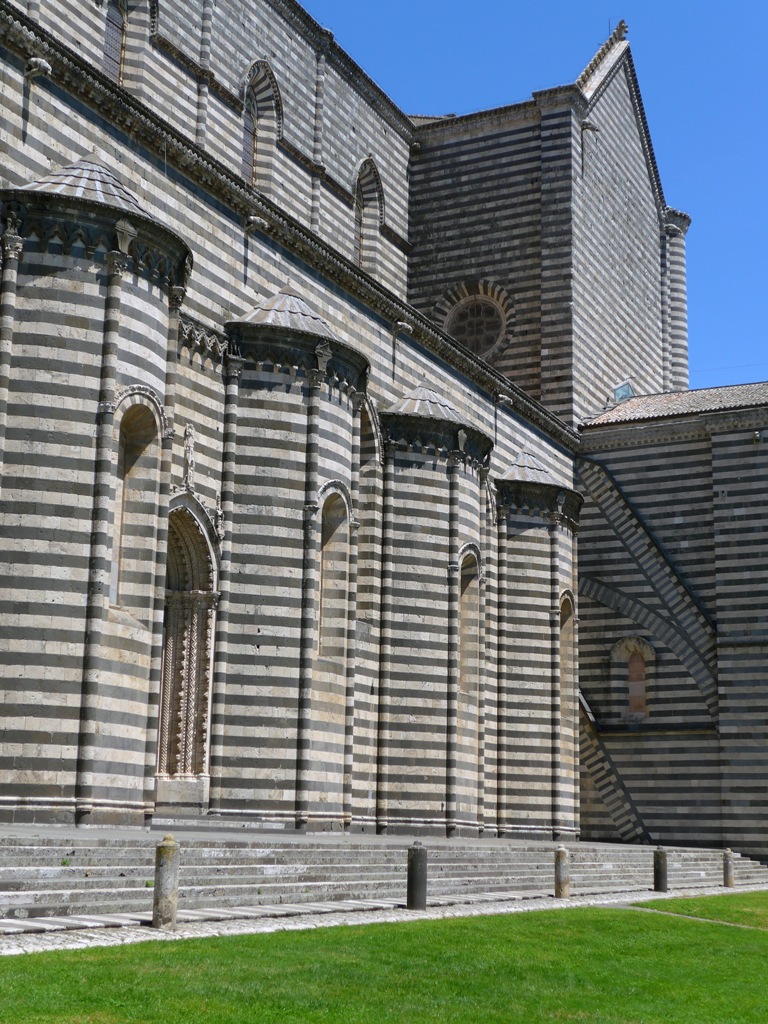 Side wall of the cathedral showing the striping of bands of white travertine and greenish-black basalt. 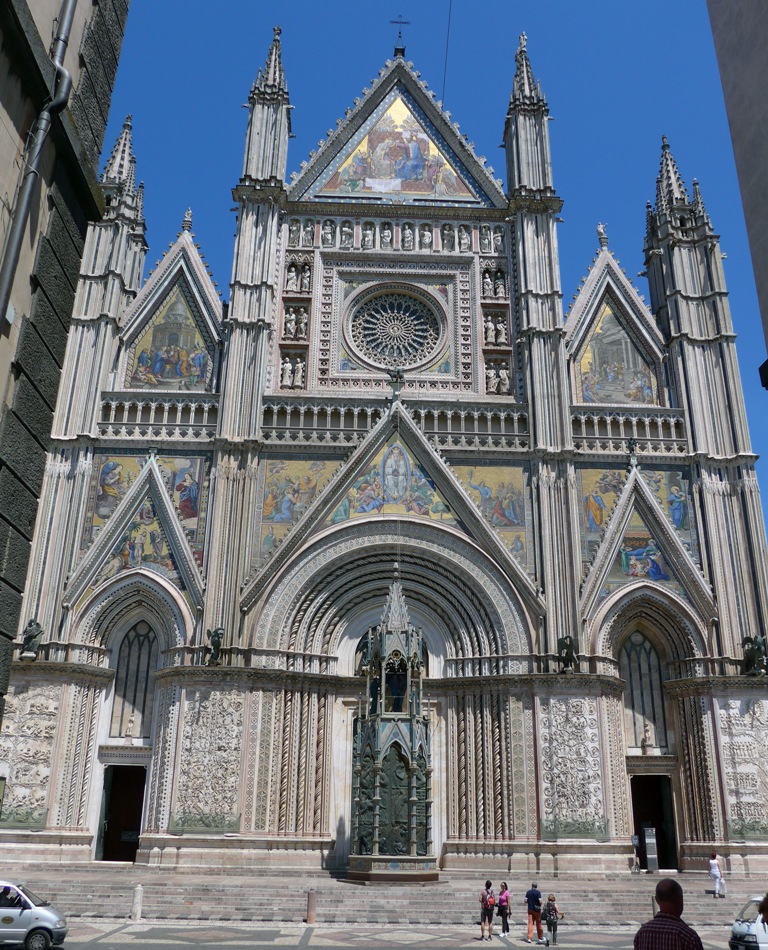 The impressive façade of the cathedral. 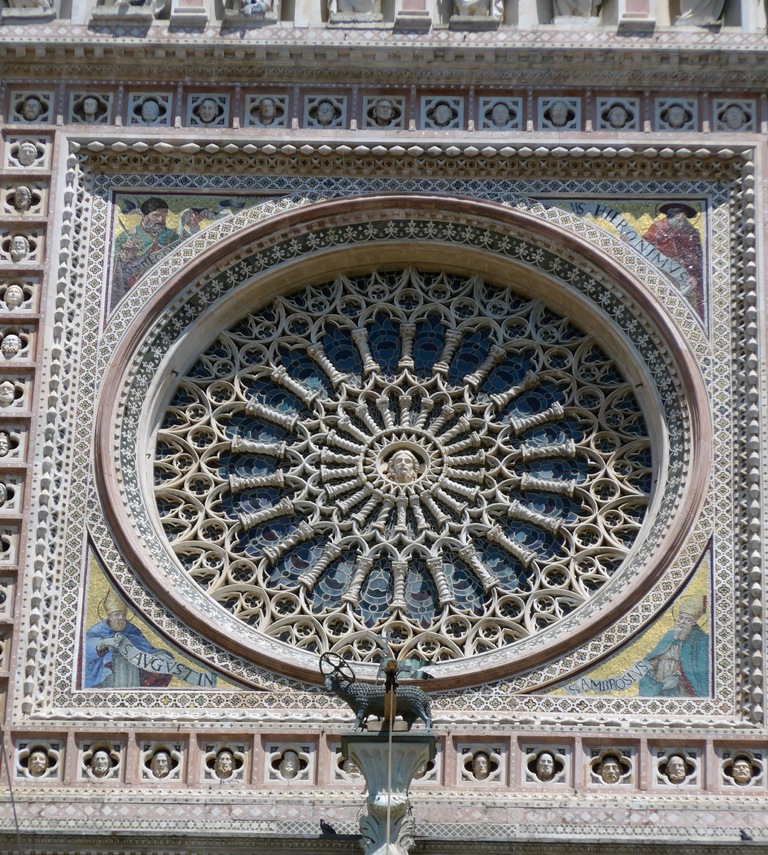 The Rose Window in the façade.
Orvieto, in southwestern Umbria, is perched on the flat summit of a large butte of volcanic tuff.  It rises dramatically above almost vertical tuff cliffs which made the city almost impregnable.  It was, however, annexed by Rome in the 3rd Century BCE. With the collapse of the Roman Empire it gained new importance and the episcopal seat was moved from Bolsena. Even when a self-governing commune was established in the 10th Century a close relationship to the papacy continued. Thomas Aquinas taught in Orvieto until called to Rome in 1265.
On 15 November 1290 Pope Nicholas IV laid the cornerstone for the “Duomo” dedicating it to the Assumption of the Virgin.  The start of the construction coincided with a time when the city was at the height of its political-institutional development and splendour. Work proceeded quickly so that in ten years the workers “had built the structure up to the impost of the roof, part of the façade with its marble decoration, the sides that formed a single body with the transept - six small projecting chapels and a semicircular apse”.  A sudden interruption to the construction in the early fourteenth century, generally believed to be because of structural problems, led to Lorenzo Maitani being called to the job. A profound change in the general plans occurred as a result of a “generational crisis” and a change in taste.  By the time Maitani died in 1330 the definitive plan had been established and building continued under a succession of capomastri.  During the three centuries that it took to build the cathedral a succession of famous sculptors were invited to direct the work. 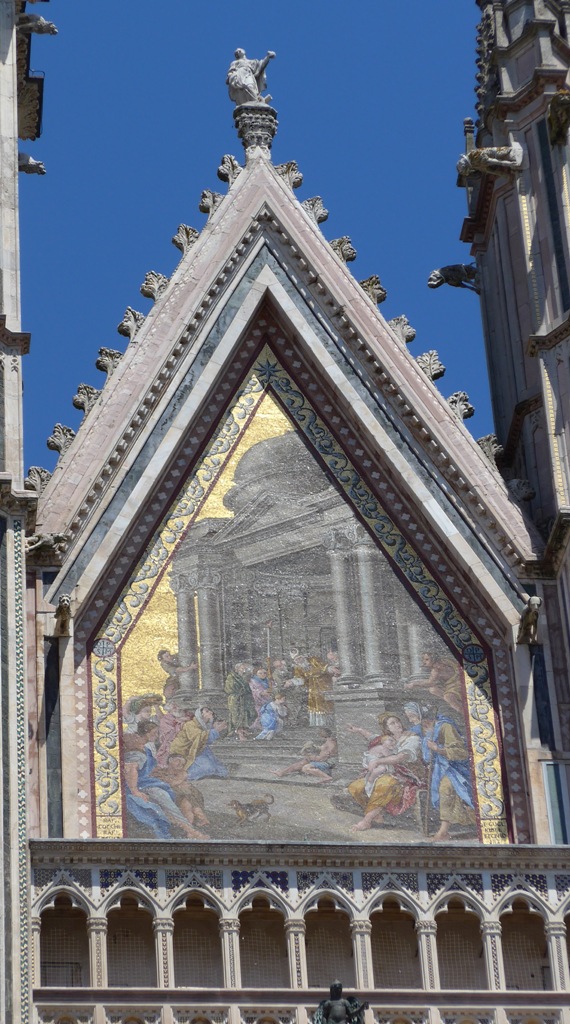 One of several mosaic panels between towers on the façade.
The façade is notable for four large panel bas relief sculptures at its base, created by a Sienese sculptor in the 13th/14th Centuries. From left to right they depict stories about Creation, Old Testament prefigurations of Christ, Episodes from the life of Jesus and the Last Judgment on the far right.  The sculptures are in high relief and the figures are exquisitely detailed and naturalistic. Bronze doors by Emilio Greco (1964-1970) are a modern addition. 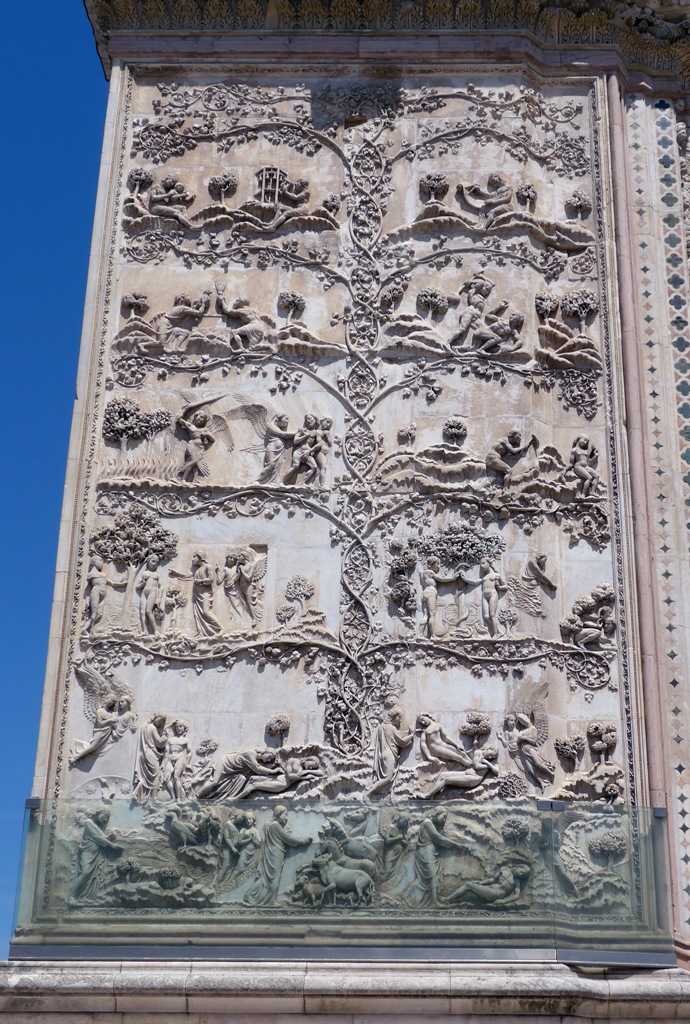 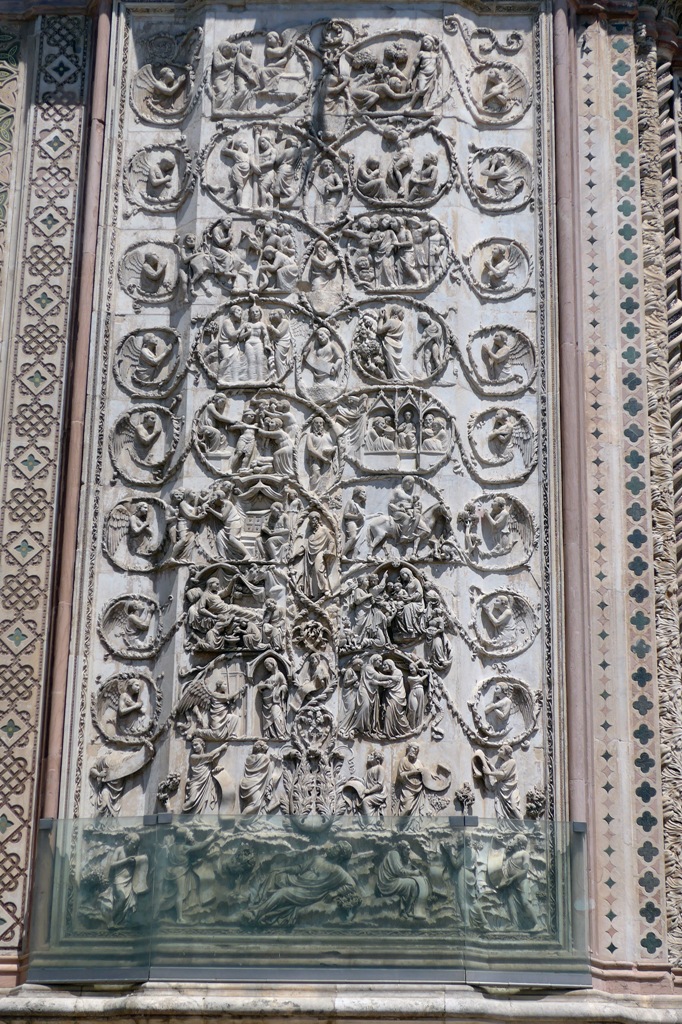 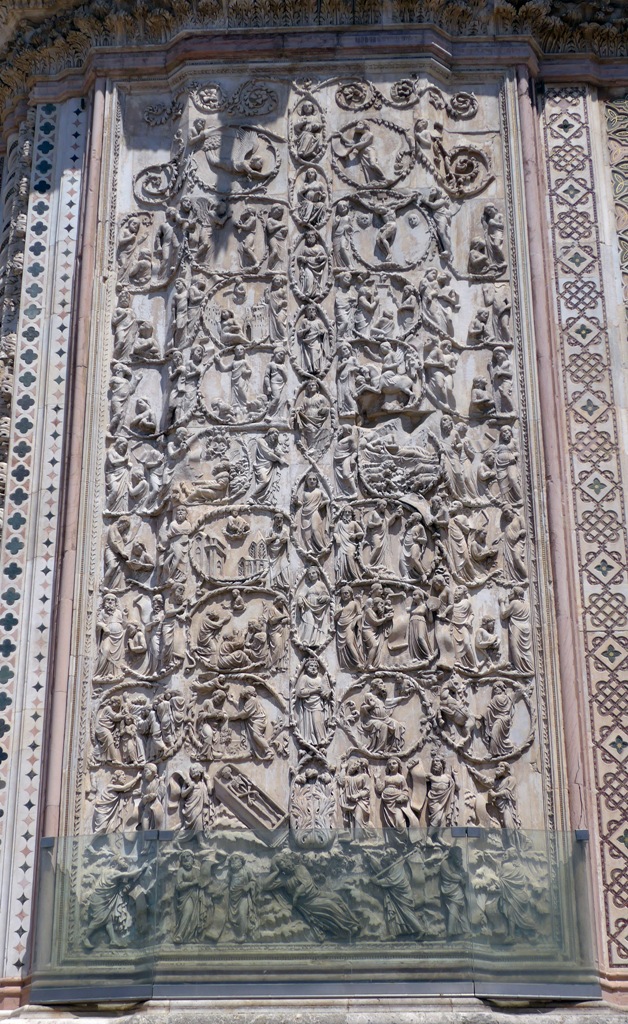 Carved bas-relief panel depicting Episodes from the Life of Jesus. 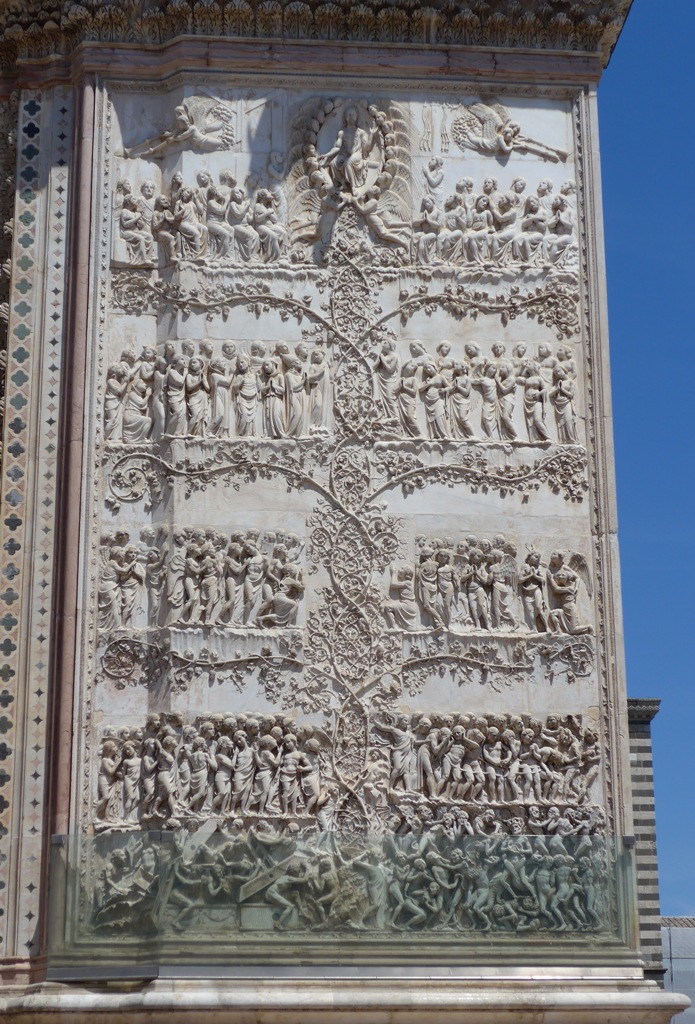 Carved bas-relief panel depicting The Last Judgement.
There are many colourful mosaics adorning the façade – most notably one at the very top depicting The Coronation of the Virgin. Elaborate bronze sculptures representing symbols of the Evangelists are set at various positions on the façade – including Matthew, Mark, Luke, John, the Archangel Michael and the Archangel Gabriel. 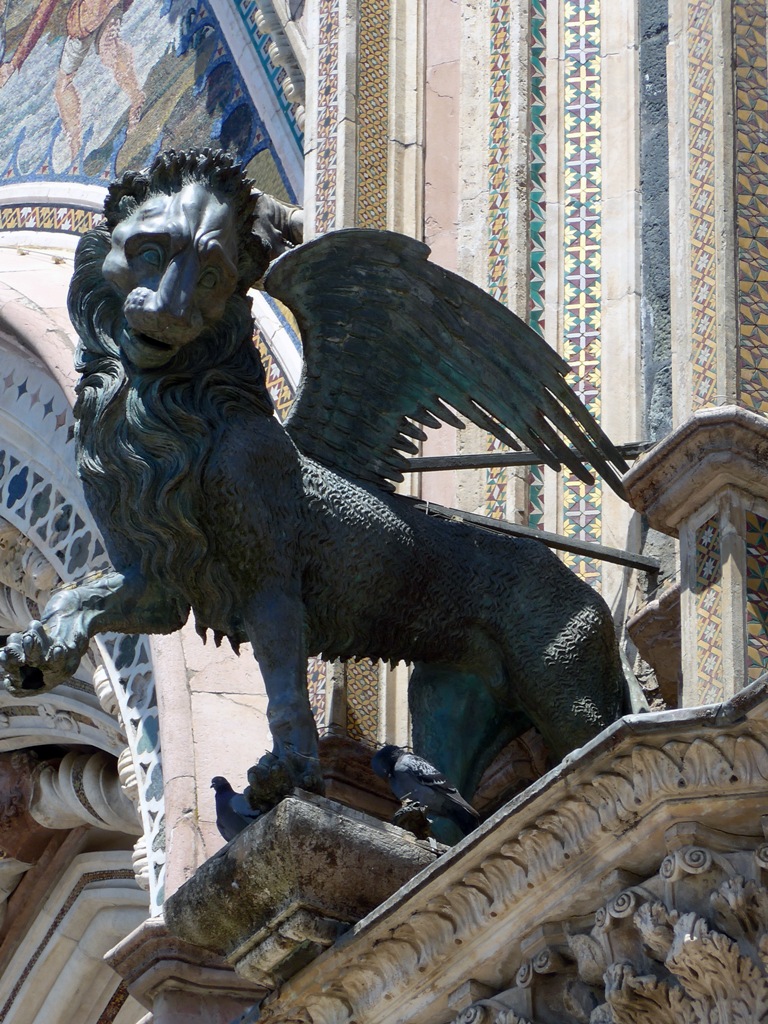 An example of the bronze sculptures on the façade – this one depicting the Lion image of St. Mark.
Several hours can usefully be spent studying features of the façade – identifying the biblical events depicted in the many mosaics, and the individual and grouped sculptures.
Photographs by George Repin at Orvieto, Italy in 2014.