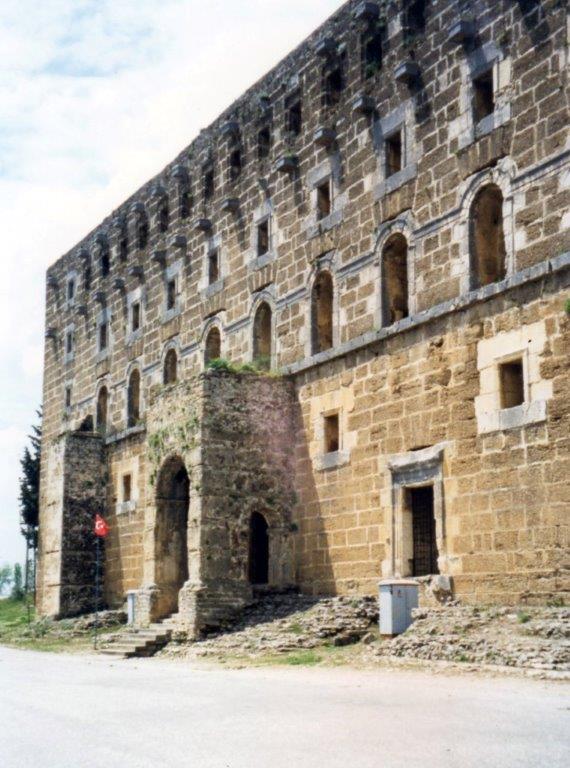 The outside façade of the "skene" and the entrance to the theatre.
Aspendos is 47 Kms east of the modern city of Antalya in Turkey and about 16 Kms inland from the Mediterranean Sea. In the 5th Century BCE the River Eurymedon on which the city stood was navigable and the city derived great wealth from trade in salt, oil and wool.  Its importance in the ancient world is indicated by the wide geographic distribution of its coinage which the city started to mint around 500 BCE.
Believed to have been originally founded by Greeks, at various times Aspendos was dominated by the Persians, the Athenians and, briefly in 333 BCE, Alexander the Great.  In 190 BCE the city surrendered to the Romans.
The theatre was built during the reign of the Emperor Marcus Aurelius (161-180 CE).  A statue honouring the architect Zeno, a Greek born in Aspendos, stands in the south parados.
With a diameter of 96 metres (315 feet) the theatre could seat 10,000 to 15,000 people (according to various estimates).   Although built in the Roman period, to conform with Hellenistic traditions, part of the theatre was built leaning against the hill where the city’s Acropolis stood, while the remainder was built on vaulted arches. There are forty-one rows of seats in the cavea (i.e. the auditorium where the audience was seated) subdivided by ten radiating staircases in the lower seating section and twenty-one staircases in the upper section.  Surrounding the uppermost row of seating at the top of the cavea is a colonnaded gallery with fifty-nine vaulted arches.  This sheltered walkway serves as a convenient access to the various seating sections and also contributes to the excellent acoustics at Aspendos. Post holes in the upper level of the theatre held masts which supported a velarium or awning which could be pulled over the audience to provide shade. 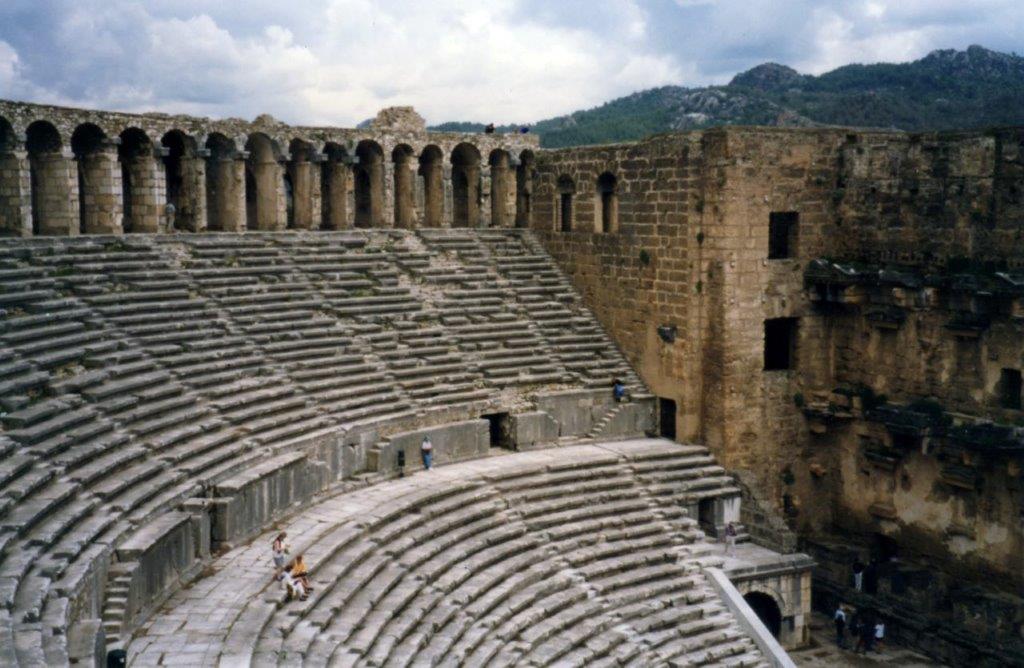 Layout of the "cavea" - i.e. the auditorium seating.  The left side of the "skene" and the stage on the right.
The skene, a high building behind the proscenium or stage, seemingly served to isolate the audience from the rest of the world but also provided a convenient backdrop for performers. An 8.1 metre wooden ceiling over the stage, which sloped back to the skene wall, has been lost.  It improved acoustics and protected actors from the elements. 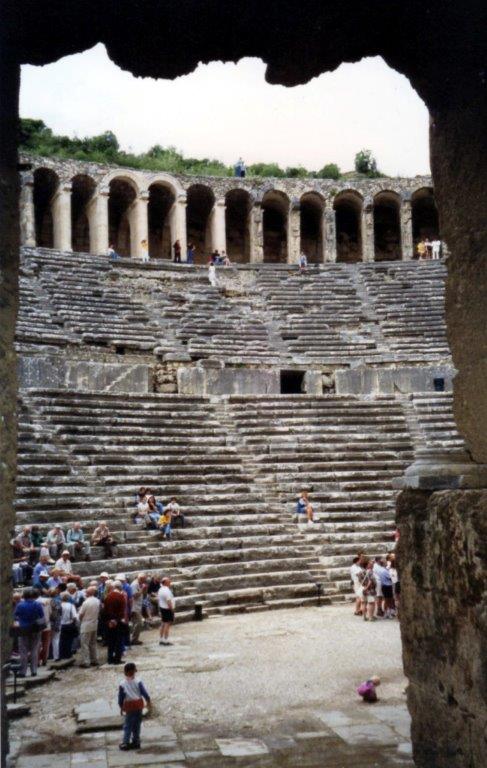 Auditorium seating seen from the "orchestra" i.e. the space between the audience and the stage.
The beauty of the theatre can only truly be appreciated on site –amateur photographs such as mine do not do it justice.
Aspendos is the site of concerts and performances of opera and ballet in the spring and early summer. 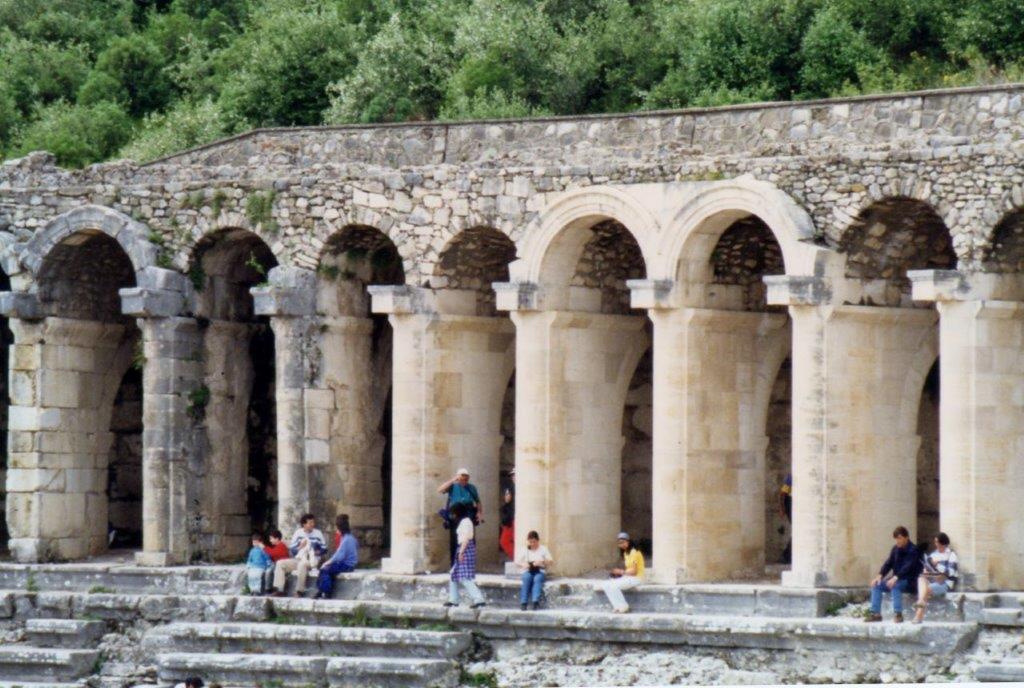 Arches of the colonnaded gallery surrounding the uppermost row of seating. 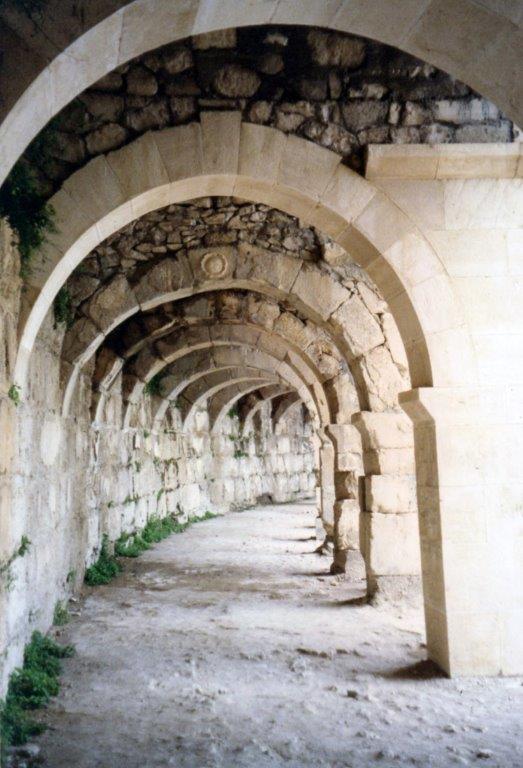 The sheltered colonnaded access gallery surrounding the uppermost row of seating.
Footnote: Bieber identifies distinctions between “western” and “eastern” Roman theatres citing the straight, multi-storied scaenae frons with a higher, seven foot, stage as characteristic of “eastern” theatre construction techniques found at Aspendos, Priene, Miletus and Termessos.  These Hellenistic-influenced theatres in Asia Minor are in contrast to the “western” theatres in Italy, Spain, France and Africa which have recessed niches for the doors in the scaenae frons and a lower, four-foot high stage. 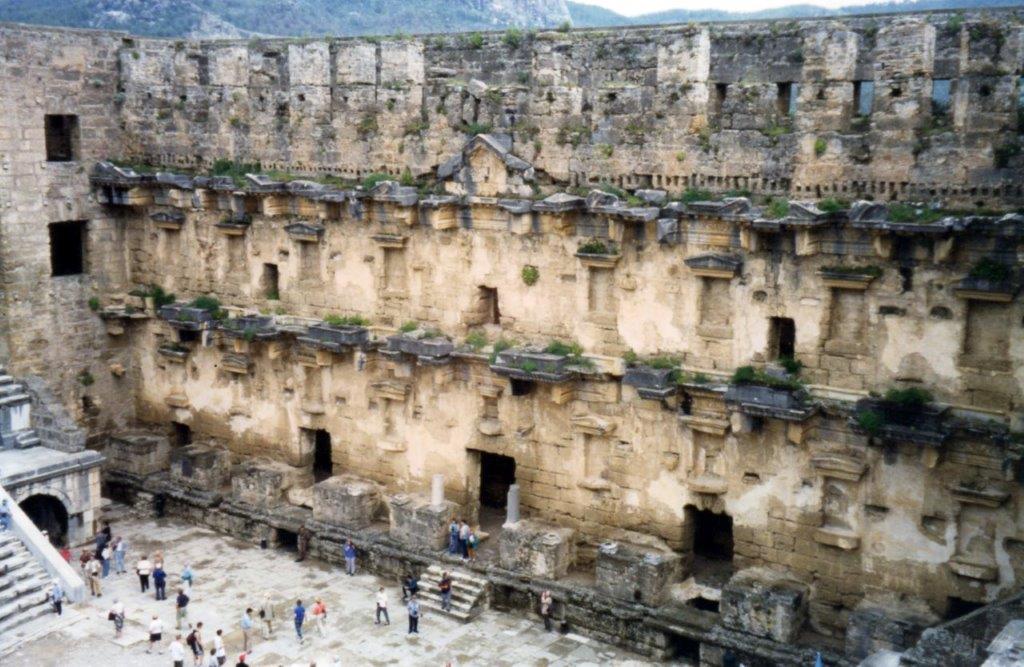 The "skene" with the "scaenae frons" at its foot.
Photos by George Repin 1997