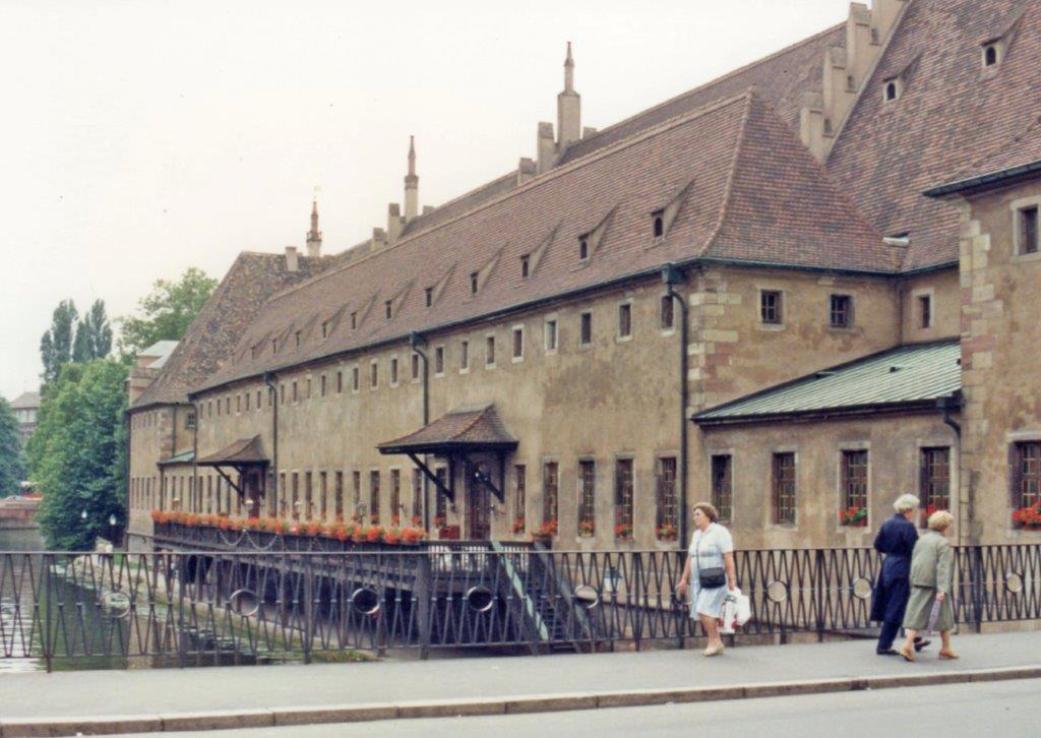 The old Customs House dating from 1358. Its role was to monitor and tax merchandise (wine, tobacco, fish etc.) passing along the Rhine.

by George Repin
Strasbourg is on the eastern border of France with Germany – the border here being the Rhine River.  The river forms the eastern border of the modern city, facing the German town of Kehl across the river.  However the historic core of Strasbourg is further to the west on the Grande Ile in the River Ill, which flows parallel to the Rhine until the rivers merge further downstream.
Strasbourg is the largest city in, and the capital of, the Alsace-Champagne-Ardenne-Lorraine region of northern France.
After achieving independence as a free Imperial city in 1262 it rose to considerable prosperity through shipping and trade and, for a time, was the wealthiest and most brilliant in the Holy Roman Empire.  Art and learning flourished.  Johannes Gutenberg, a German from Mainz, while living in Strasbourg between 1434 and 1444, invented the method of printing with movable metal type which led, ultimately, to the facility to produce multiple copies of books, making easier the spread of knowledge.  The benefits gained by the world thanks to his invention of printing are depicted on the plinth panels of his statue in Gutenberg Square. 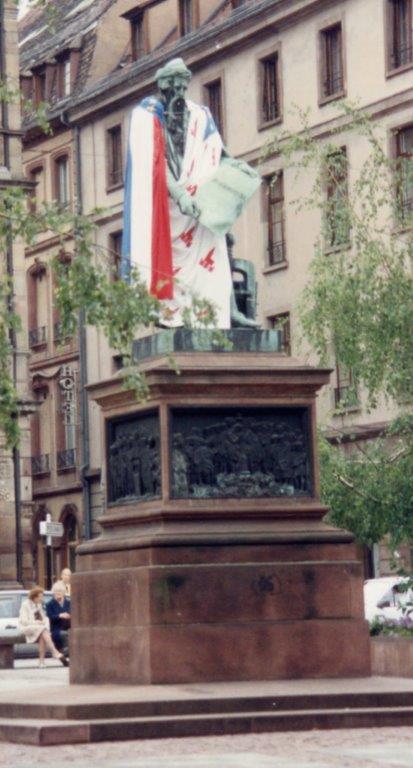 Statue of Johannes Gutenberg in Gutenberg Square.
In 1681 Louis XIV occupied the city for France, although French cultural influences did not assert themselves until the time of Napoleon.  After the Franco-Prussian War of 1870-71 Strasbourg passed to German sovereignty and remained German until the end of World War I after which it returned to France.  (Note: Accordingly the spelling of the name of the city changed from time to time.)
UNESCO, in 1985, classified the historic city centre of Strasbourg a World Heritage Site, because of its immersion in Franco-German culture having been a cultural bridge between France and Germany for centuries.
Strasbourg is the official seat of the European Parliament and the site of a number of other European institutions. Its port is the second largest on the Rhine.
The Cathedral of Notre Dame, built on the foundations of an early Romanesque church begun in 1015, reflects the organic development of architectural styles from Romanesque to Late Gothic (12th to 15th Cent.).  It is the site of the famous Astronomical clock (18 m. high) made between 1570 and 1574. 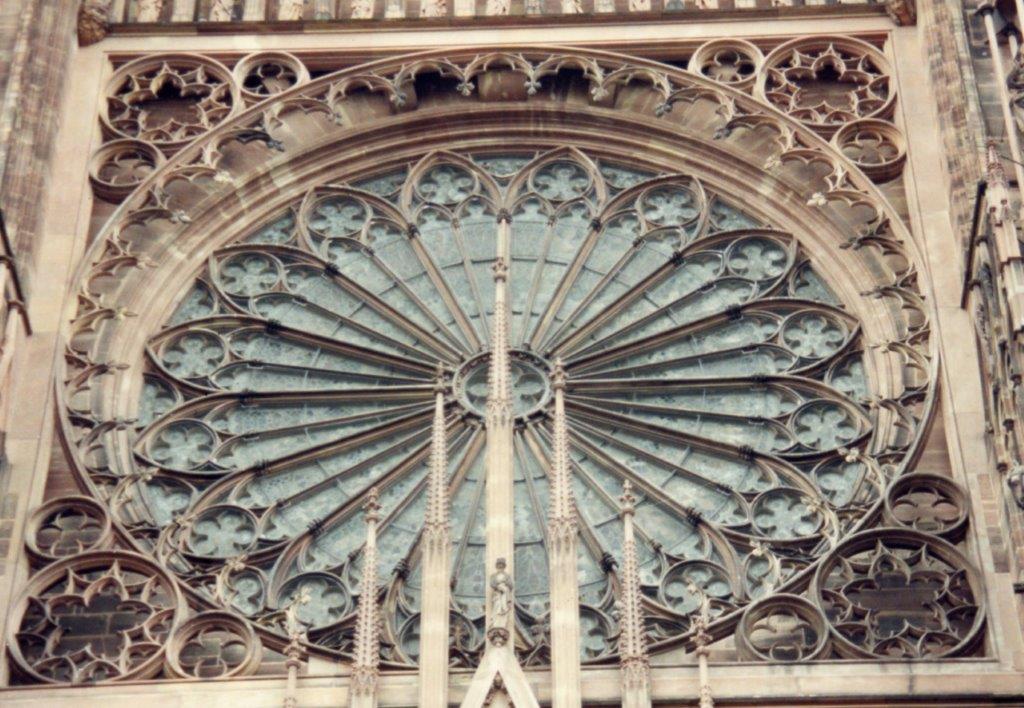 Rose window on the façade of the Cathedral of Notre Dame. 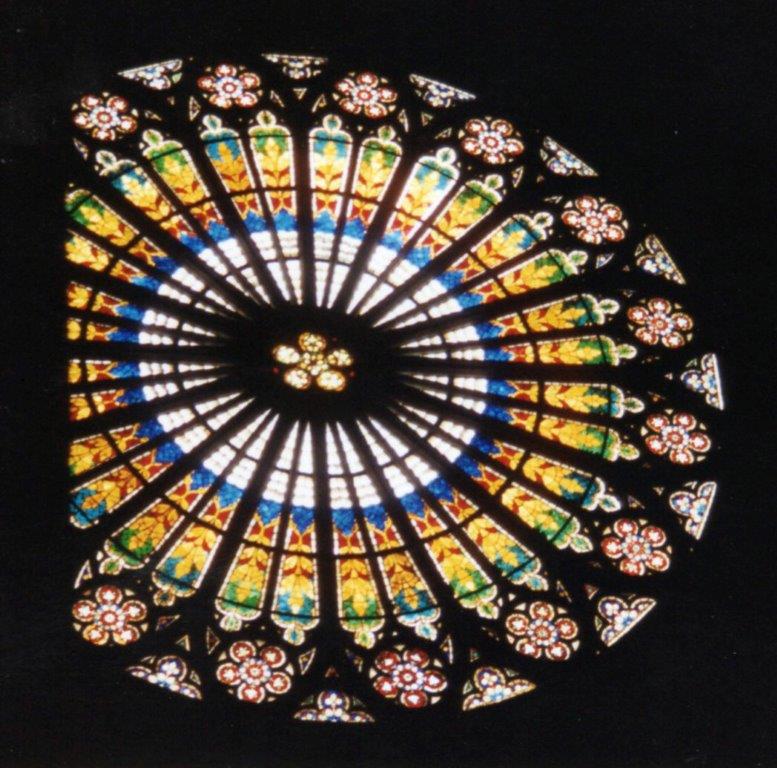 Partial view of the inside of the Rose Window. 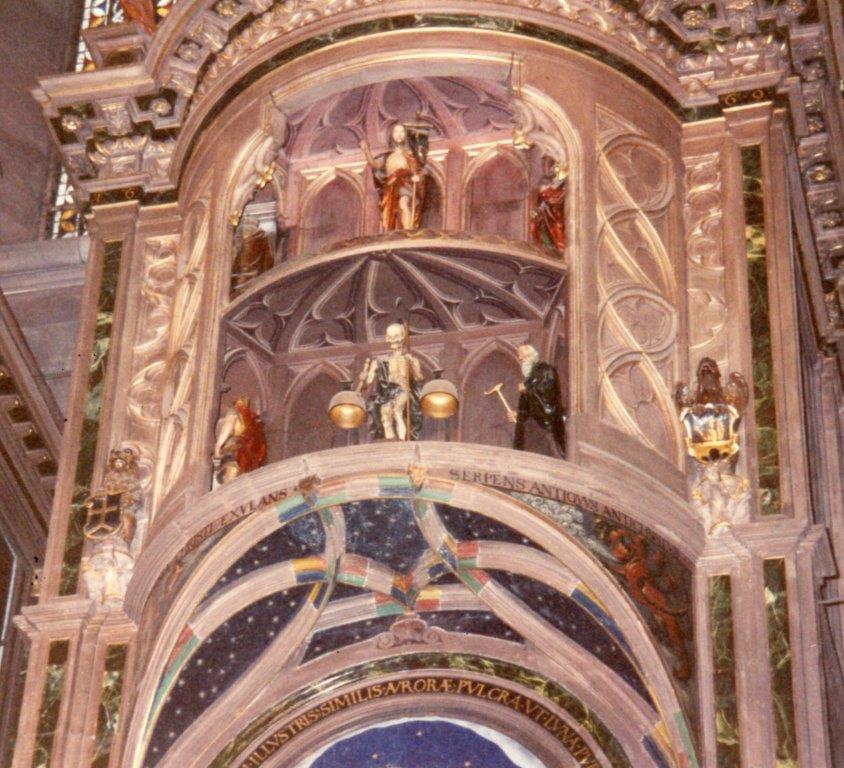 Upper part of the astronomical clock.
The old city has preserved many half-timbered houses notable for their size and wooden galleries. Many have oriel windows of wood or stone dating from the 16th and 17th Centuries.  Others, with very steep roofs, have windows open into attics in which skins were dried.
Attractive views of half-timbered houses reflected in the water of the navigation channel reward a stroll along its banks. 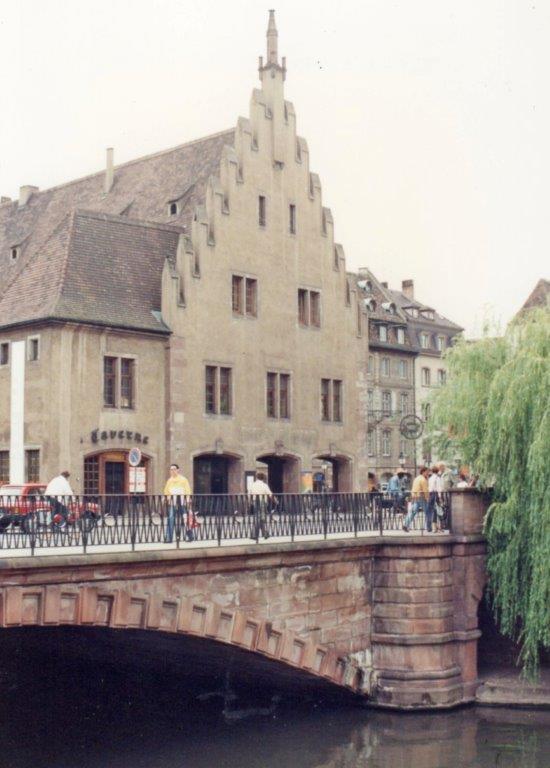 Distinctive house near a bridge over the navigation channel. 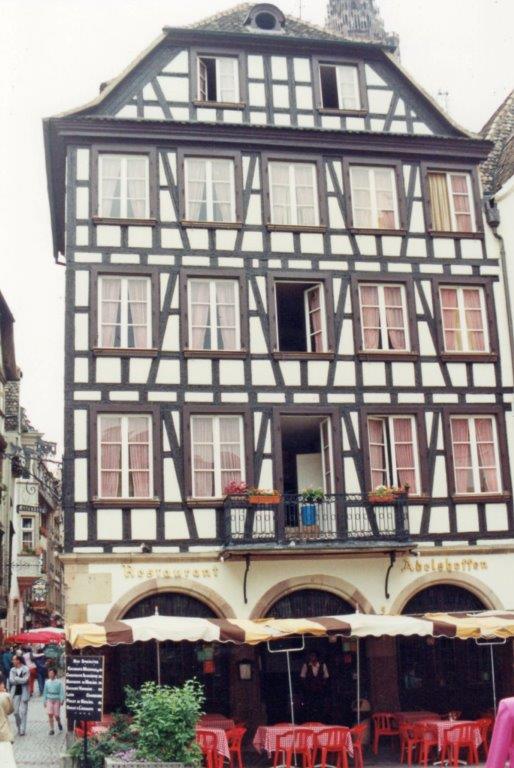 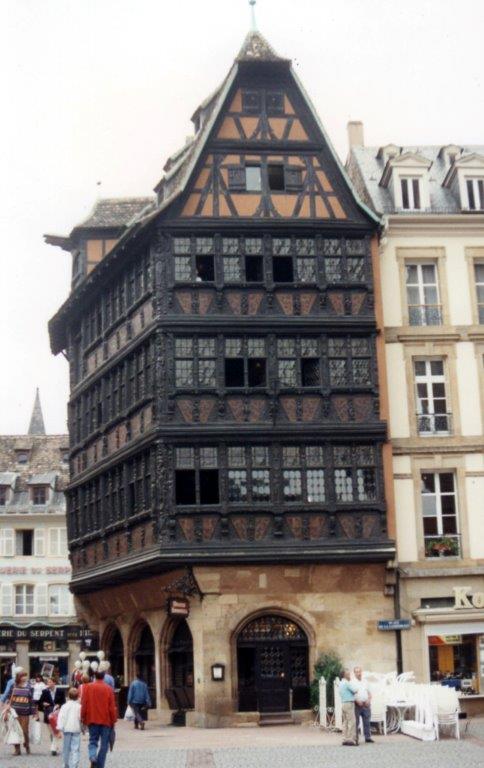 Maison Kammerzeil - the finest old burgher's house in the city. 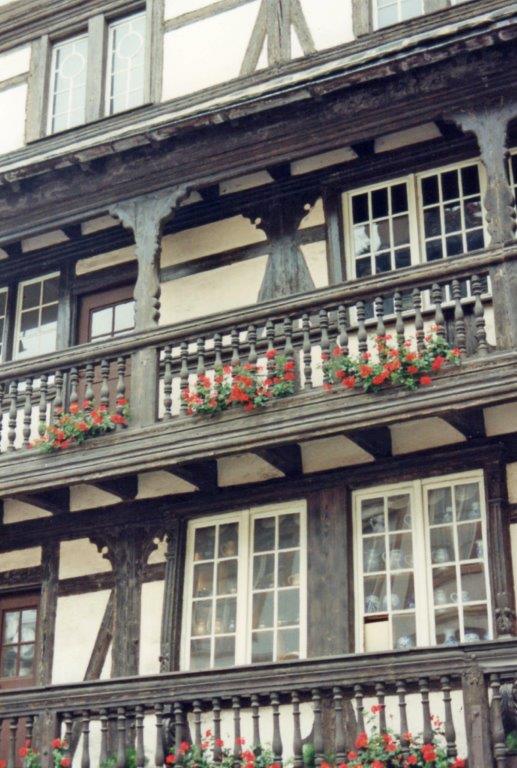 Wooden galleries on a half-timbered house. 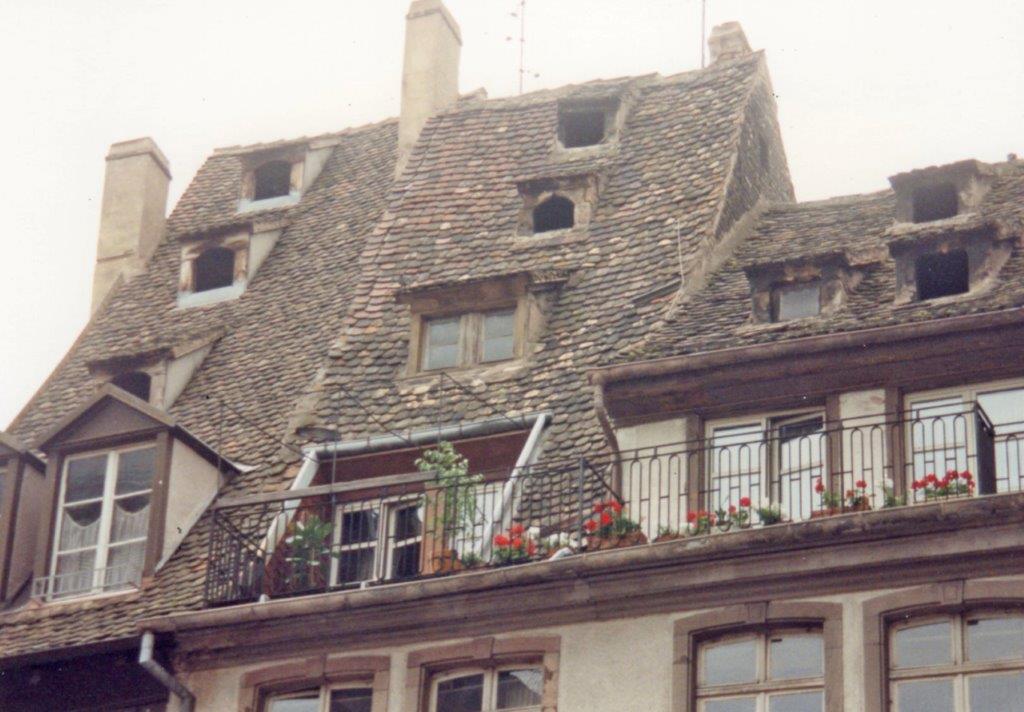 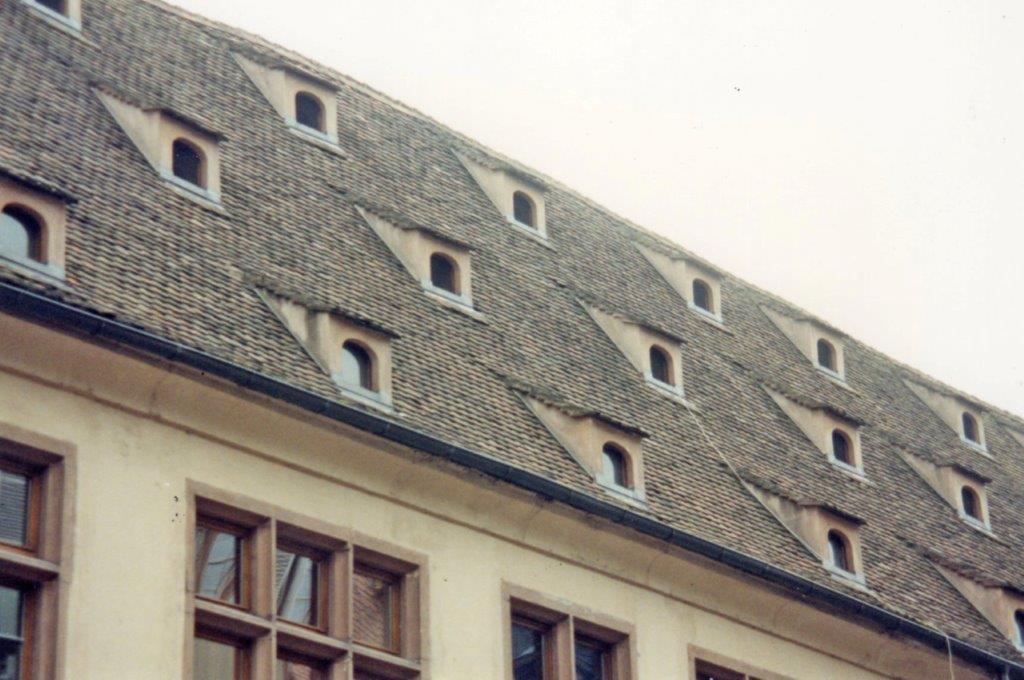 Steep roof with the top two tiers of attic windows open and the bottom tier glazed. 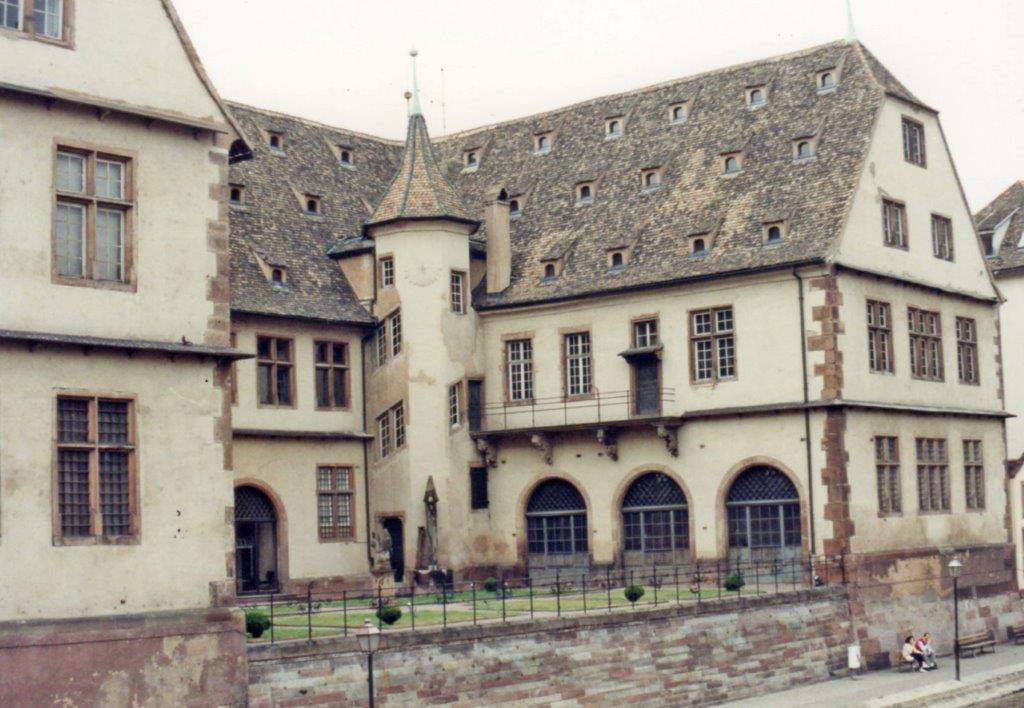 An impressive burgher's house.
Photographs by George Repin in 1989

Model Of The Strasbourg Clock At The Powerhouse Museum, Sydney

The following is an extract from the website of the Museum of Applied Arts and Sciences, Sydney:
“For over a century the Strasburg Clock model has been one of the most popular exhibits at Powerhouse Museum.  A young Sydney clockmaker, Richard Bartholomew Smith (1862-1942) built this model of a famous clock in Strasburg, France between 1887 and 1889.  In the following year the NSW Government purchased the model for $700 and arranged to put it on display at the Technological Museum, as this Museum was then known.  There it soon became the main attraction.
“Smith based his model on the astronomical clock in Strasbourg Cathedral. Strangely, Smith never visited Strasbourg (which in his time was called Strassburg or Strasburg) to see the clock and claimed to have based his design only on a postcard and a book.
“The Museum’s model operates every day starting six minutes before each hour.  After some appropriate Australian music and a brief commentary, the procession of the Apostles tells a story from the Christian bible.  In an alcove figures representing the four ages of Man change every quarter of an hour while there is also a crowing rooster and two cherubs, one of which turns a sandglass.  Among a variety of fascinating dials one shows the position of the planets in relation to the Sun and another shows how the Sun, the moon and the stars appear over Sydney.” 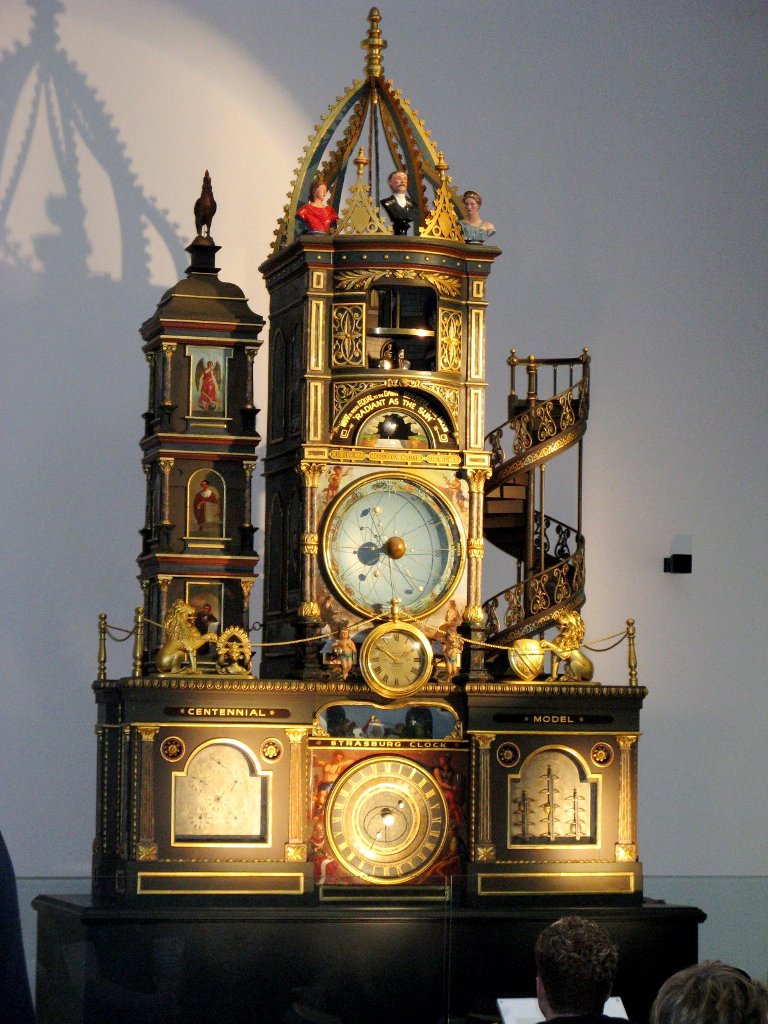 Clock at Powerhouse museum, replica of the astronomical clock in the cathedral of Strasbourg, France. Photo courtesy Museumsfotografierer
You can see this on display at the Powerhouse Museum, 500 Harris St, Ultimo