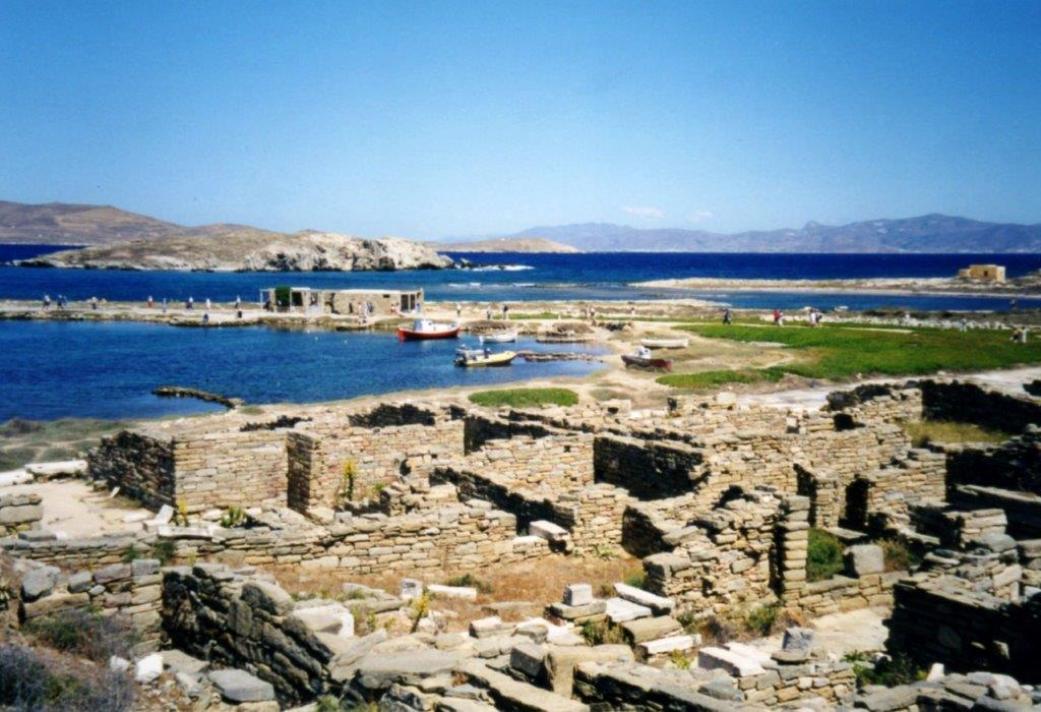 by George Repin
Although only a small rocky island of about 3 square Kilometres (5 Kms. long and 1,300m. wide) Delos is one of the most important mythological, historical and archaeological sites in Greece.  It lies near the centre of the Cyclades Archipelago in the Aegean Sea just south of Mykanos.  It is devoid of vegetation and its highest elevation (Kynthos) is 112m. 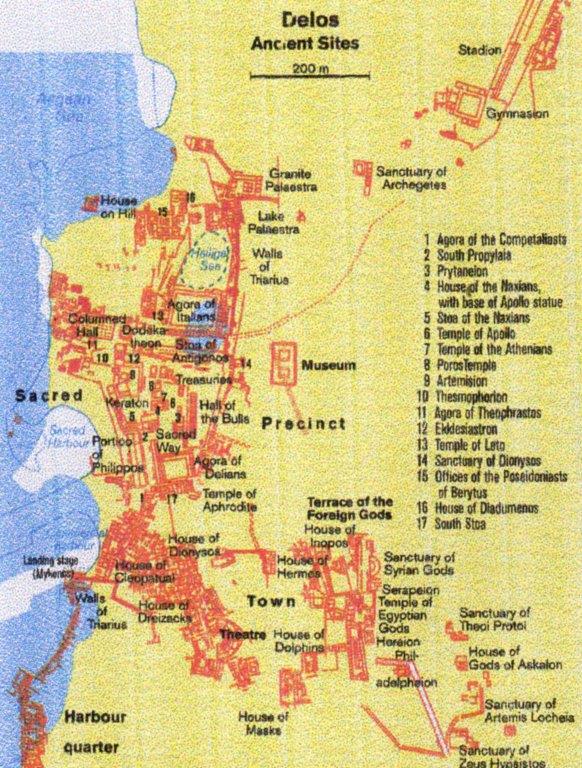 Plan of Ancient Sites
Ancient stone huts found on the island indicate that it was inhabited in the 3rd millennium BCE. However it was not until the 8th century BCE that the site began to take on a religious significance in the wider Greek world and by the time Odyssey was written (c.700 BCE) it had taken its place in Olympian Greek mythology as the birthplace of Apollo and Artemis (although it is sometimes maintained that Artemis was born on Ortygia). 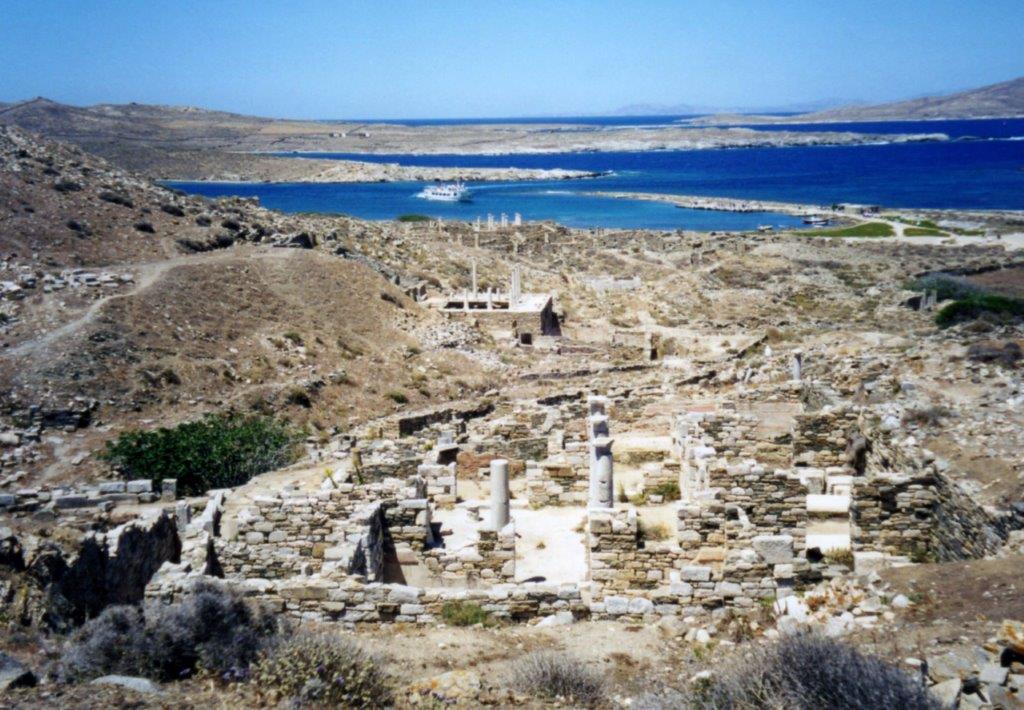 View towards landing stage from near the Temple of Isis 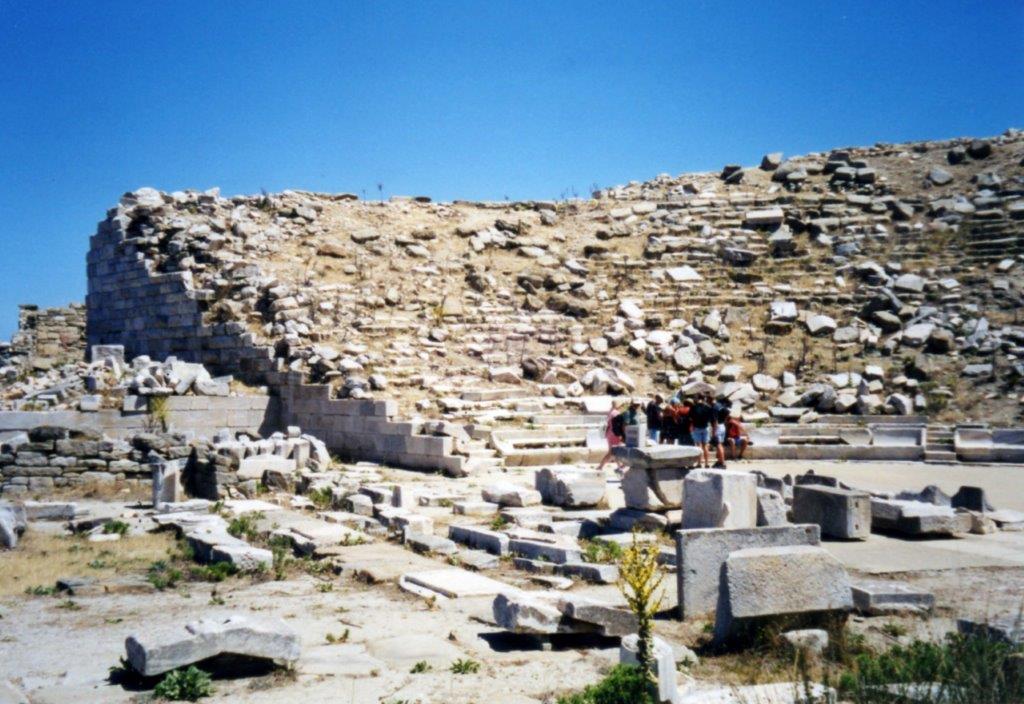 The theatre which seated 5000 people. (N.B. Group of tourists for scale). 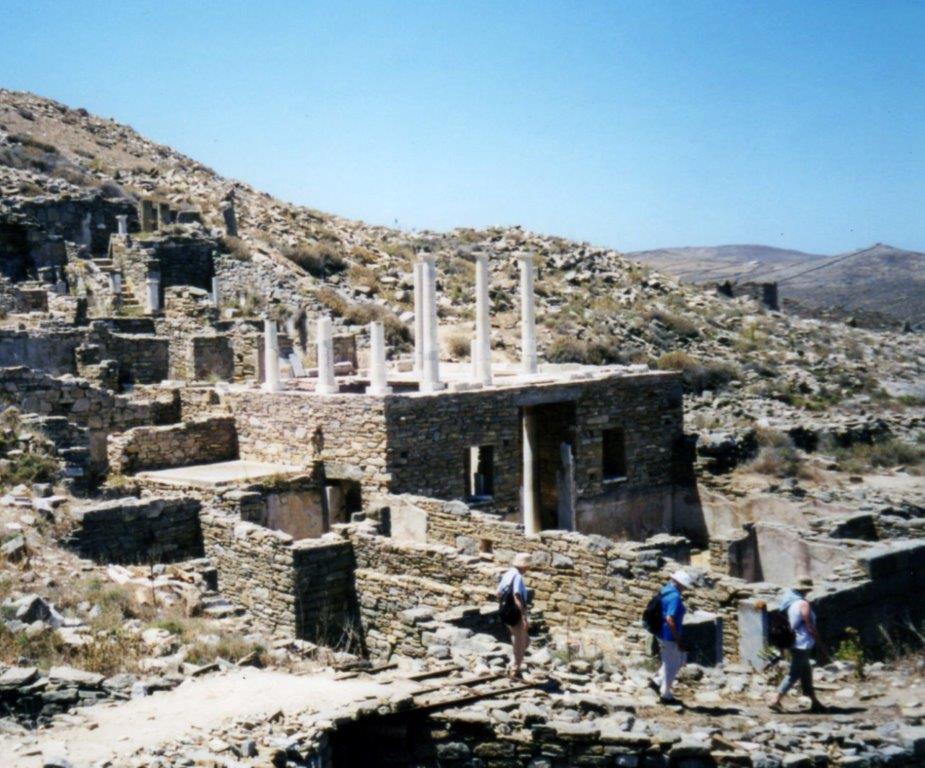 The House of Hermes . (N.B. figures in the foreground for scale).
In an attempt to make Delos suitable for the proper worship of the gods a number of purifications were undertaken by the Athenian state – the first in the 6th century BCE when all graves within sight of the Temple of Apollo were dug up and moved to another island - and again in the 5th century BCE when the island was completely cleared of dead bodies.  It was decreed that no one should be allowed to give birth or to die on the island – a prohibition which continues to this day. Visitors may not stay on the island overnight and must leave by the late afternoon.
Delos was first excavated by a team of French archaeologists (Ècole francaise d’Athènes) from 1873 CE when the extent of the religious site became apparent.  Their excavations continue to this day, progressively disclosing a diverse complex of buildings. Delos is one of the best excavated sites in Greece, on a par with Delphi and Olympia, but possibly more extensive. 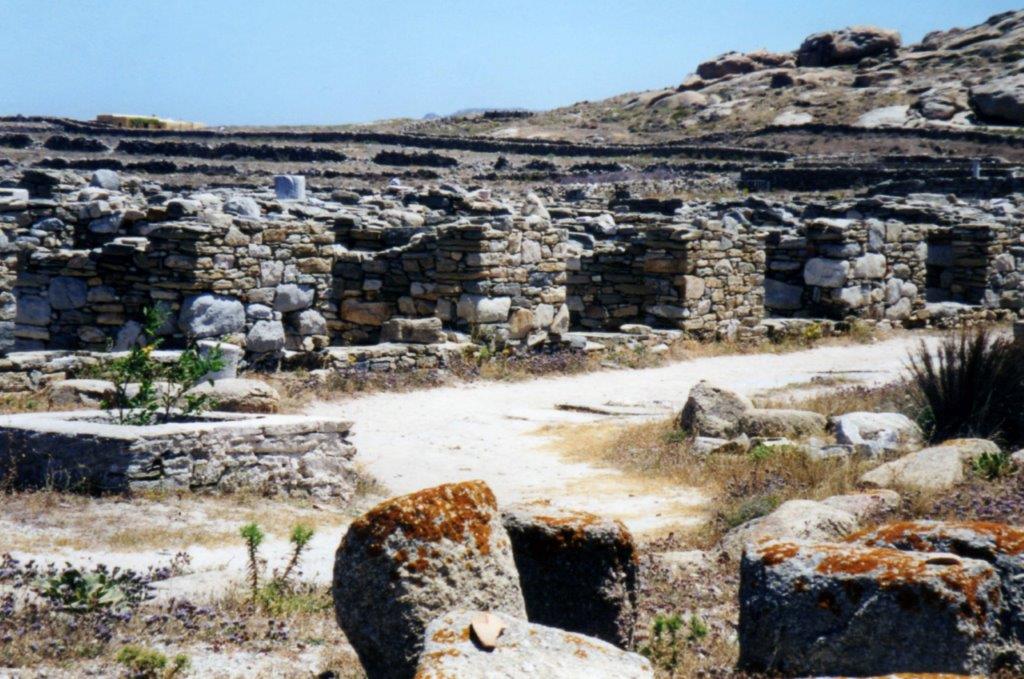 Stoa of Antigonas Gonetas (3rd Cent. BCE). Rooms for housing representatives sent to the annual festivals.
In 166 BCE, when the Romans made Delos a free port, it assumed a great commercial significance and became the centre of the slave trade with the largest slave market in the region.
In 1990 UNESCO included Delos on the World Heritage List citing it as an “exceptionally extensive and rich” archaeological site which “conveys the image of a great cosmopolitan Mediterranean port”.
Of the nine marble lions dedicated to Apollo by the people of Naxos in the 7th century BCE only five, badly weatherworn, survive.  The originals were moved to the Delos Museum in 1999 and replaced by replicas which now stand on the Terrace of the Lions of Delos, where they had created a monumental avenue. 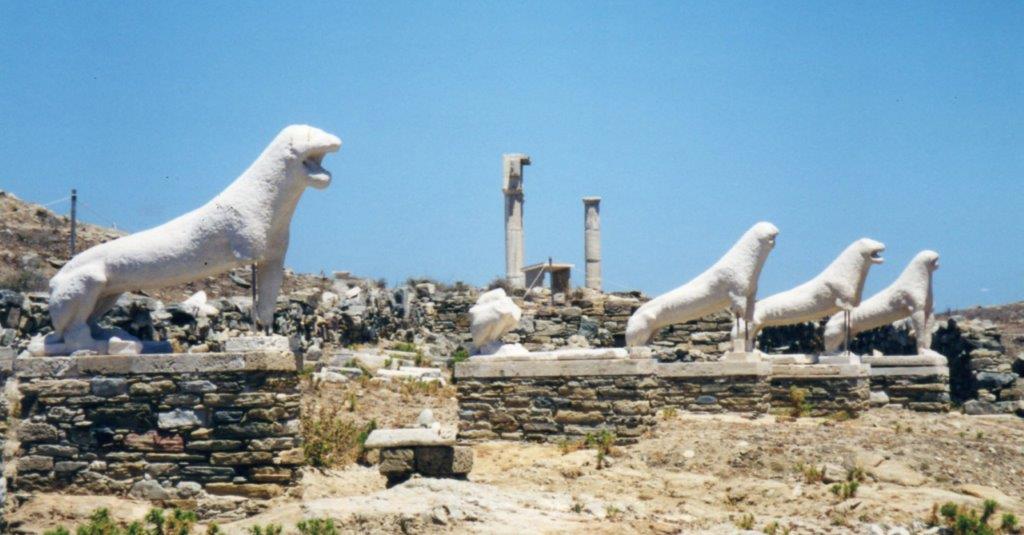 The Lions of Delos (replicas). The original marble lions moved to Delos Museum as they were badly eroded.
Photographs by George Repin in 2001. 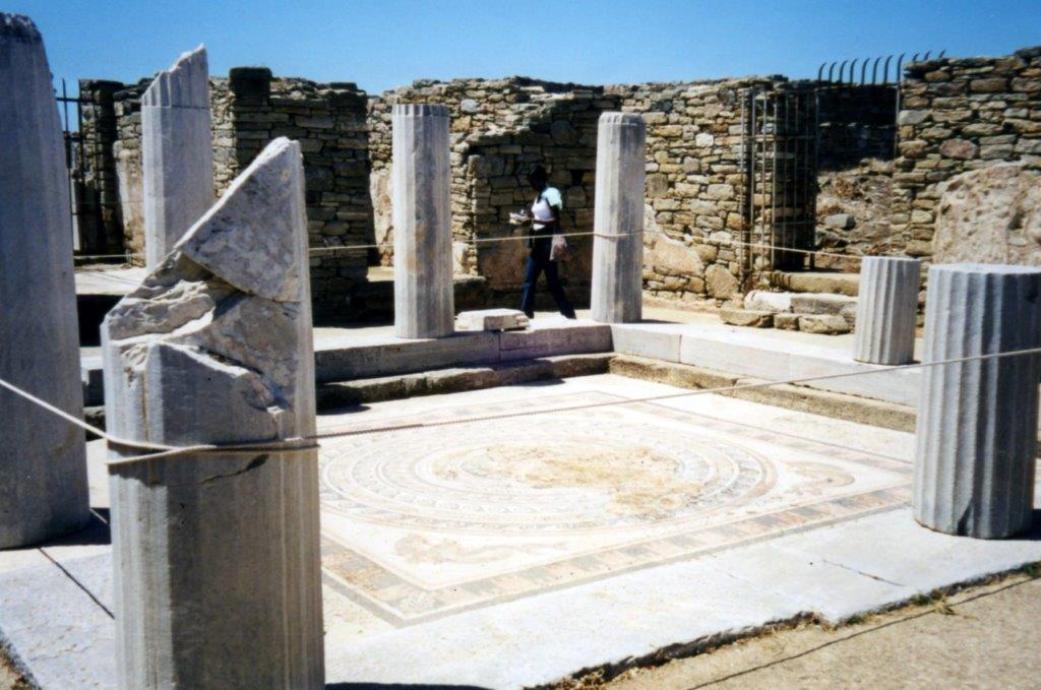 House of the Dolphins. 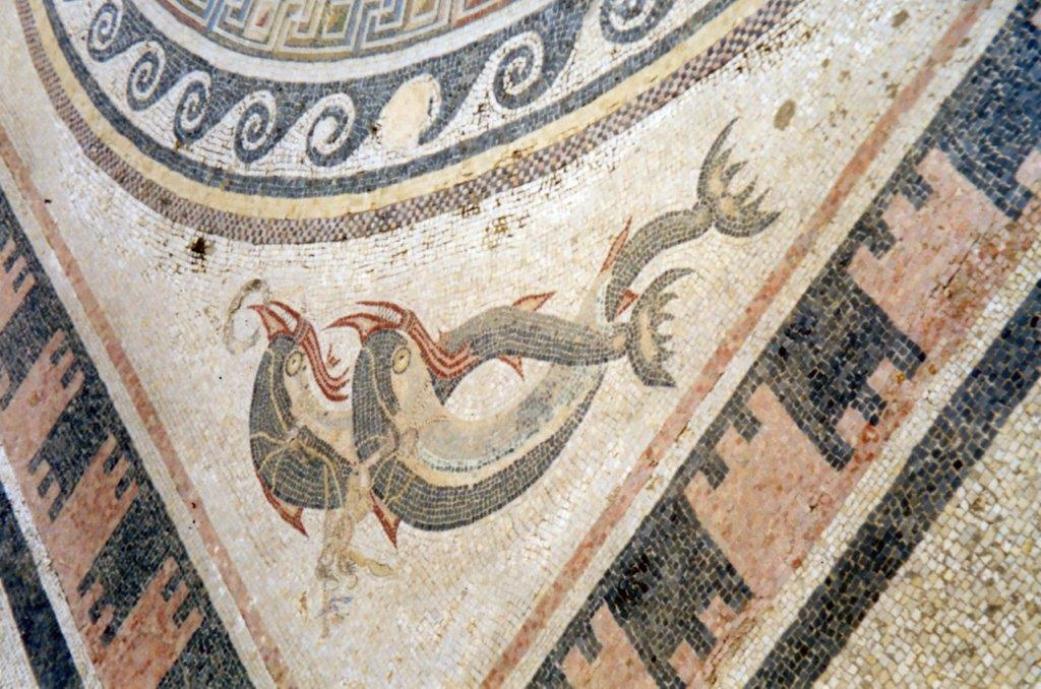 Mosaic in the House of the Dolphins. 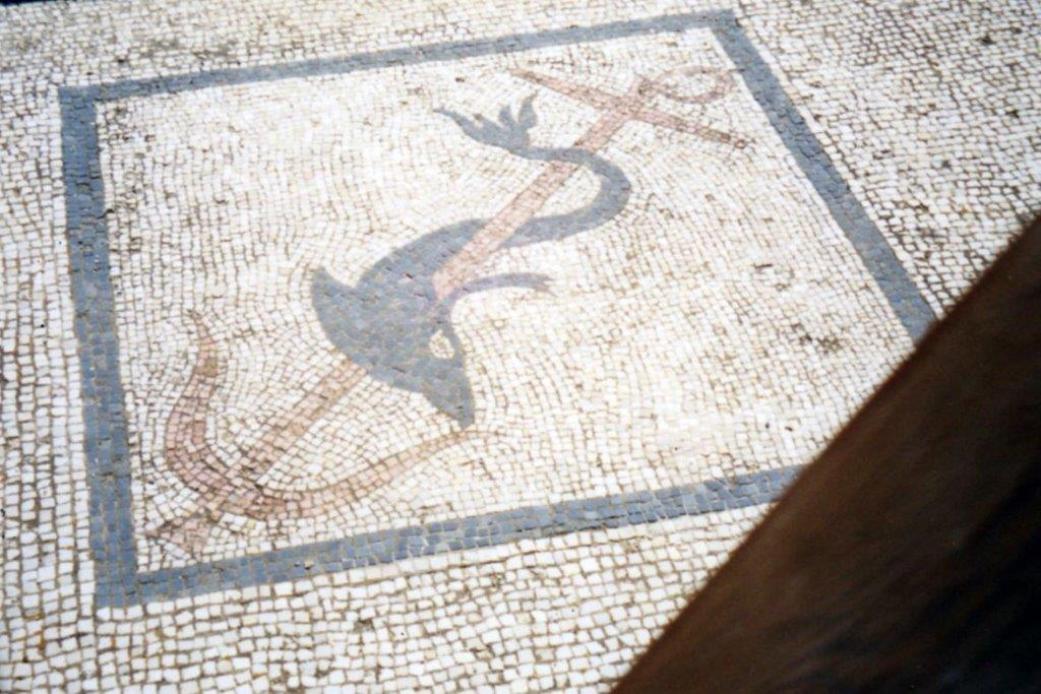 Mosaic in the House of the Trident.