EPHESUS – SOME PLACES OF INTEREST

Looking down Harbour Street from the Great Theatre

EPHESUS – SOME PLACES OF INTEREST
By George Repin

Reflections in Issue No. 268 of this publication described the location of Ephesus in Turkey and included a few notes on the city’s history, but most of the article was devoted to one of the most beautiful restored structures in the ruins, dating from the Roman period, The Library of Celsus.  However, a visitor with the time and enthusiasm to explore other parts of the city would find much of interest.  This article describes some such places a visitor might come across and enjoy. 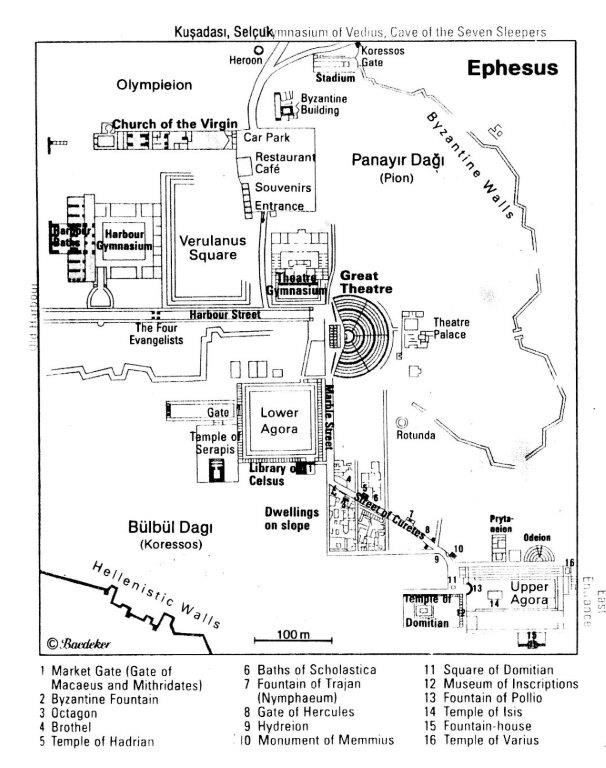 Ground plan of Ephesus
The Great Theatre
Built in the 1st Century CE and later renovated by several Roman Emperors it is the most impressive and imposing structure in Ephesus.  Its facade faces Harbour Street which led to the harbour, important for the commerce of the city until it silted up.  There were 66 rows of stone seats divided into horizontal sections with enough seating for 25,000 spectators.  The seats in the lower section, which were for important people, had marble backs.  The theatre was used for theatrical plays, music performances, political and religious events.  The theatre was severely damaged in an earthquake in the 4th Century CE and was only partly repaired.  Much of the theatre seating was removed and used in the construction of other buildings. 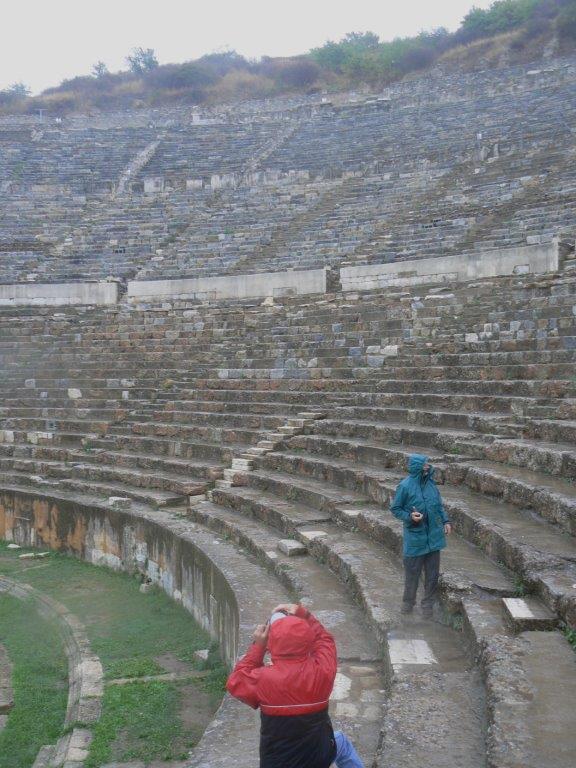 Seating in the Great Theatre
Scolastica Baths
These were the largest baths in the city, consisting of three levels.  Two levels have collapsed leaving only ground floor rooms and an arch of the third floor surviving in good condition.  Initially built in the 1st Century CE a Christian woman undertook their restoration in the 4th Century CE.
The actual baths were on the ground floor and consisted of a caldarium (hot water section), a tepiderium (a warm bath), a frigidarium (a cold bath) and an apodyterium (dressing room).  The water (hot or cold) and steam were delivered by clay pipes (either underground or built in to the walls).

The Scolastica Baths
Latrines (Public Toilets)
These were part of the Scolastica Baths, next to the Temple of Hadrian.  An entrance fee was charged to use them.  The toilets were built as marble benches along the walls surrounding a central pool.  A gutter, in which clean water flowed continuously, ran along in front of the benches. 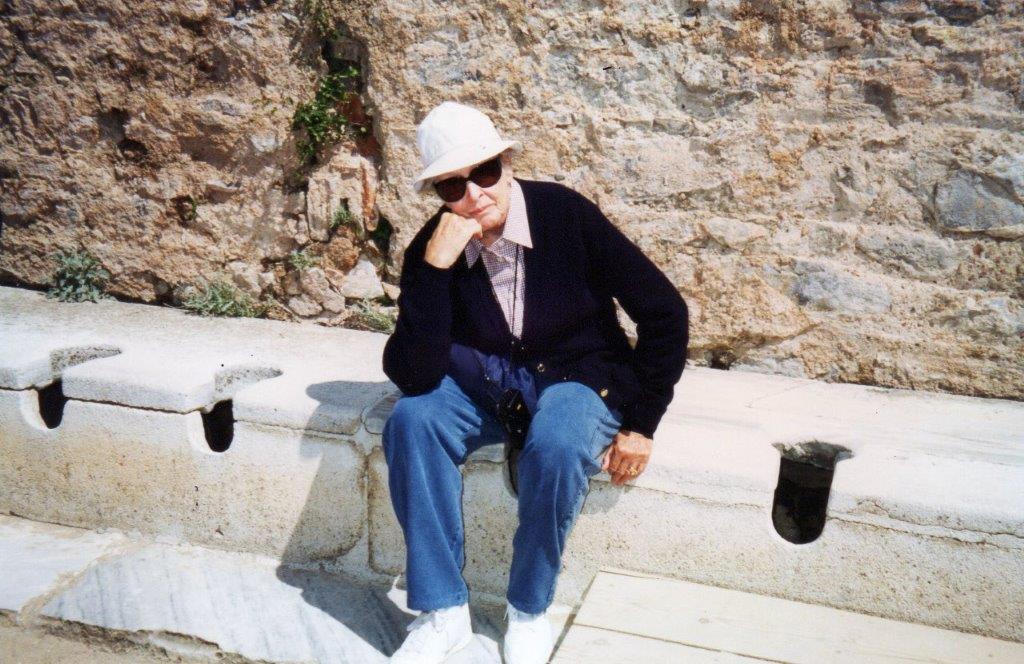 Latrines - Public Toilets
The Temple of Hadrian
Located on Curates Street, this is one of the best preserved and beautiful buildings in the city.  Constructed in the beginning of the 2nd Century CE it was reconstructed in the 4th Century CE by Theodosius.  There were four Corinthian columns under a triangular pediment on the facade under which was an arch.  In front of the four columns were inscriptions and statues of the four Emperors – Diocletian, Maximiam, Constantinus and Galerius - who ruled the Roman Empire during the years 293 to 305 CE. 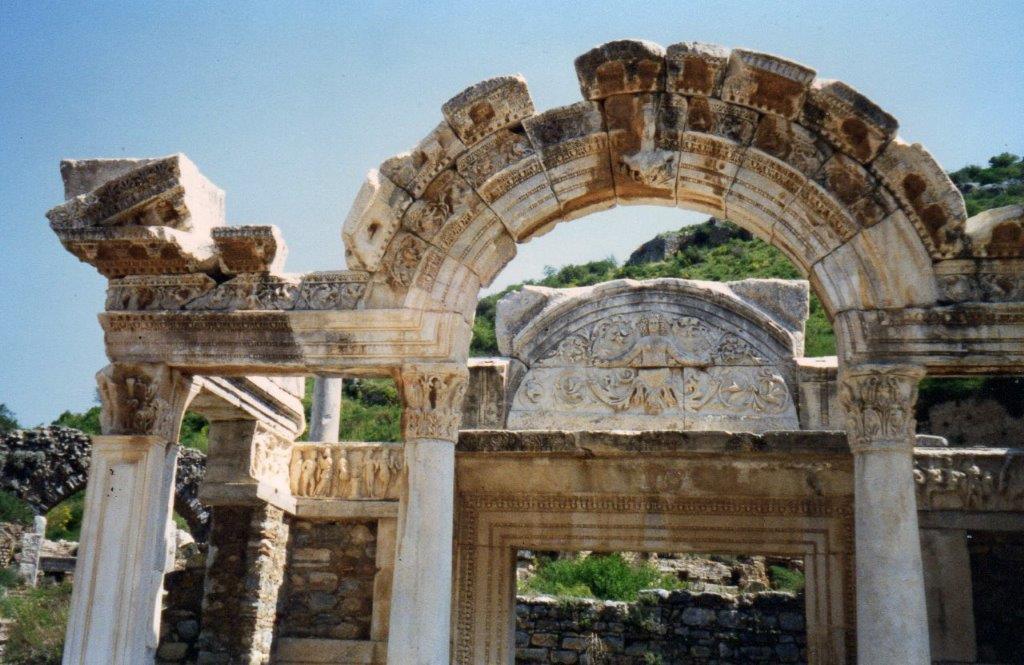 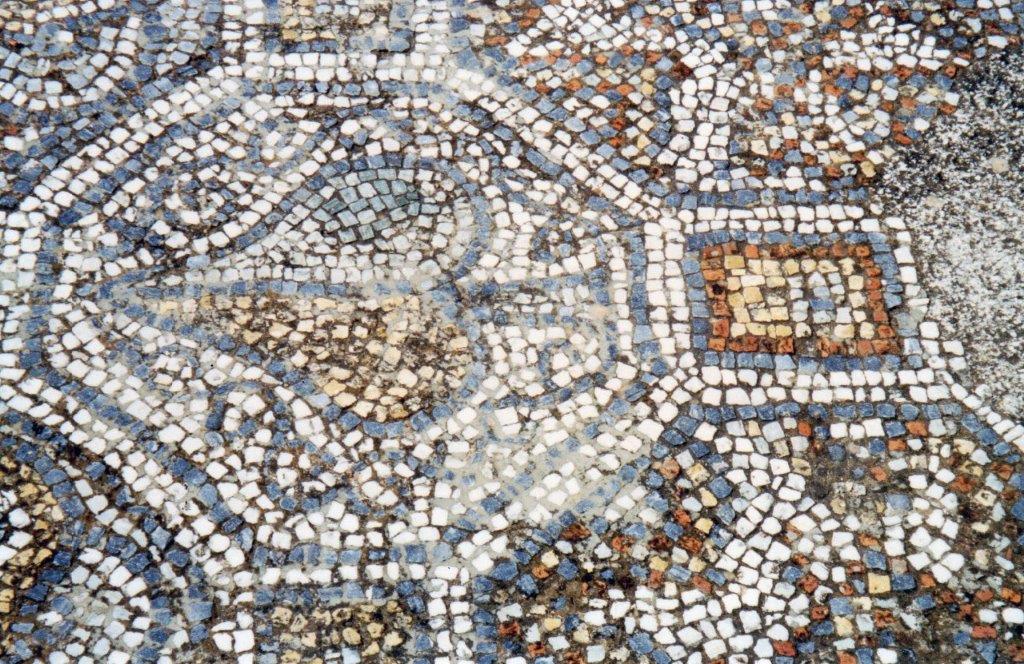 Mosaics across Curetes Street from the Temple of Hadrian
The Prytaneion
The Prytaneion was an administrative building with administrative offices, the archives of the city and a dining room for official visitors.  Hestia’s sacred flame was in the middle of a courtyard and was guarded by priests of the goddess, known as Curettes, to ensure that the flame never went out.  Only two of the original eight columns on the front of the building have survived. 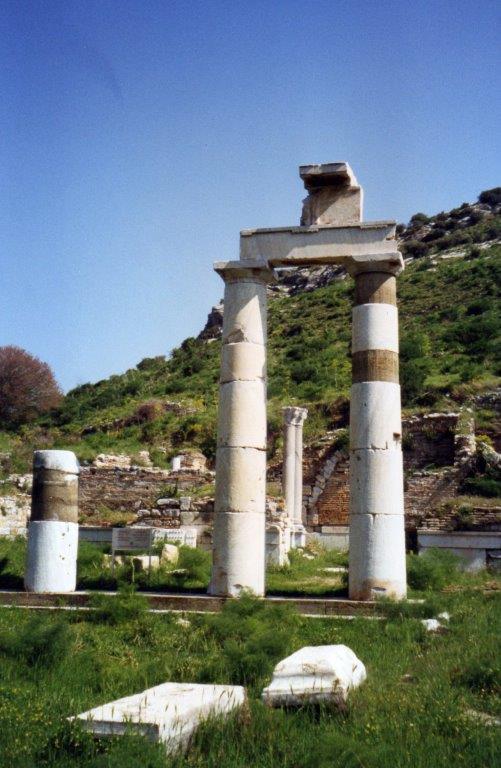 The Prytaneion
Temple of Domitian
Built on the second level of a terrace at Domitian Square the temple consisted of thirteen columns on the long sides and eight on the short.  The ground floor contained warehouses and shops.  Although for a long time believed to have been built to honour the Emperor Domitian recent research suggests that it was, in fact, built to honour the Emperor Titus.

The Temple of Domitian 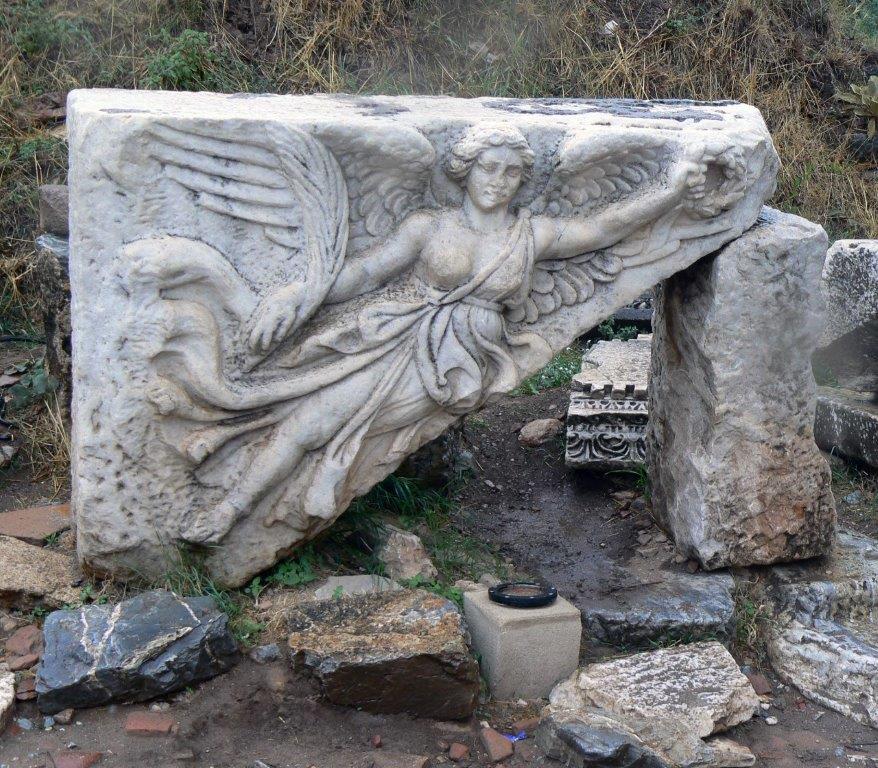 Sculpture from Temple of Domitian
Memmius Monument
Built in the 1st Century CE by the Emperor Augustus as a memorial to Memmius, son of Caius and grandson of the dictator Sulla who in 87 BCE conquered Mithridates of the Pontic Empire.  Originally the monument had four facades with sculptured figures.  Three hundred years after its construction it was converted to a fountain. 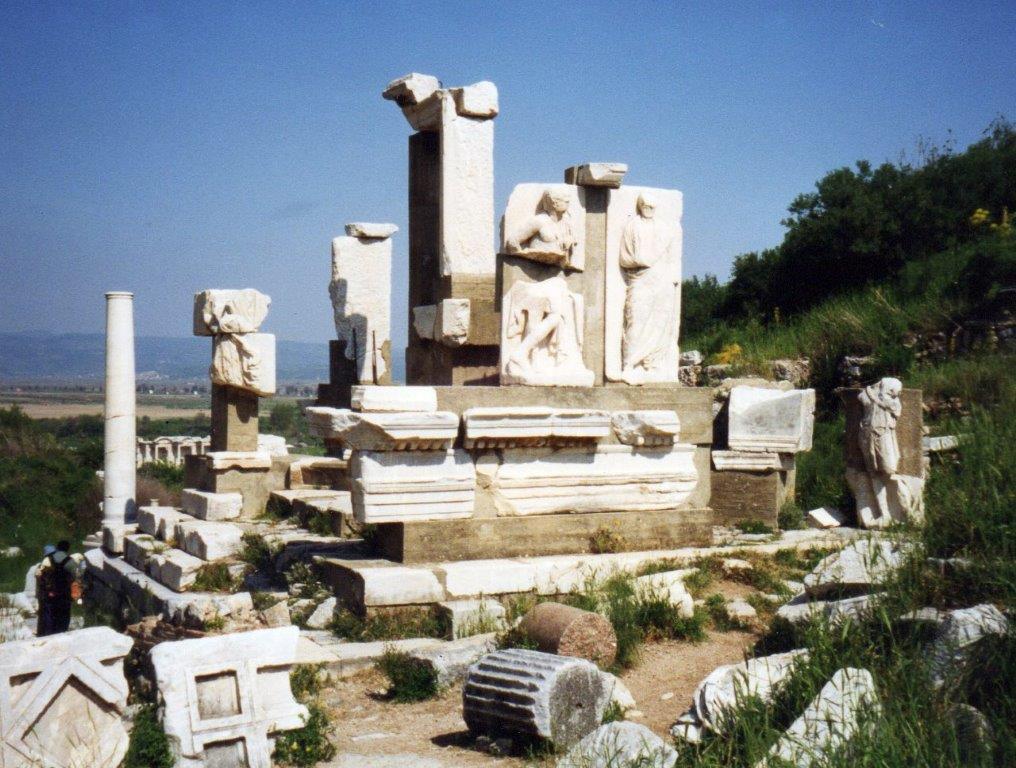 The Monument of Memmius 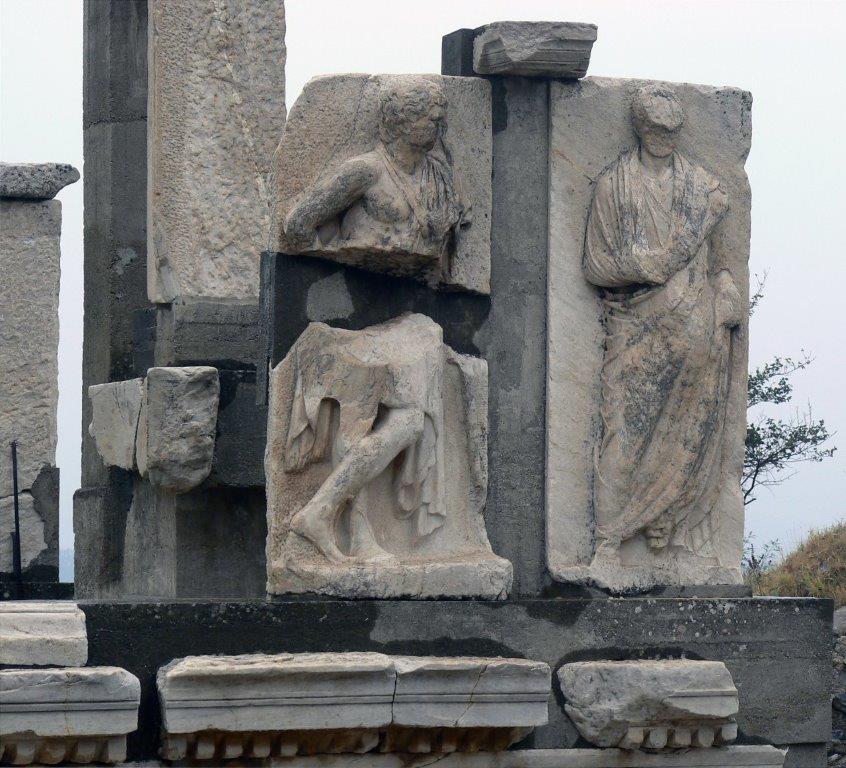 Detail of the Monument of Memmius.
Spending time wandering through the ruins of Ephesus with a good guide book or, better still, with a dedicated knowledgeable guide is time well spent.
Photographs by George Repin in 1997 and 2006.