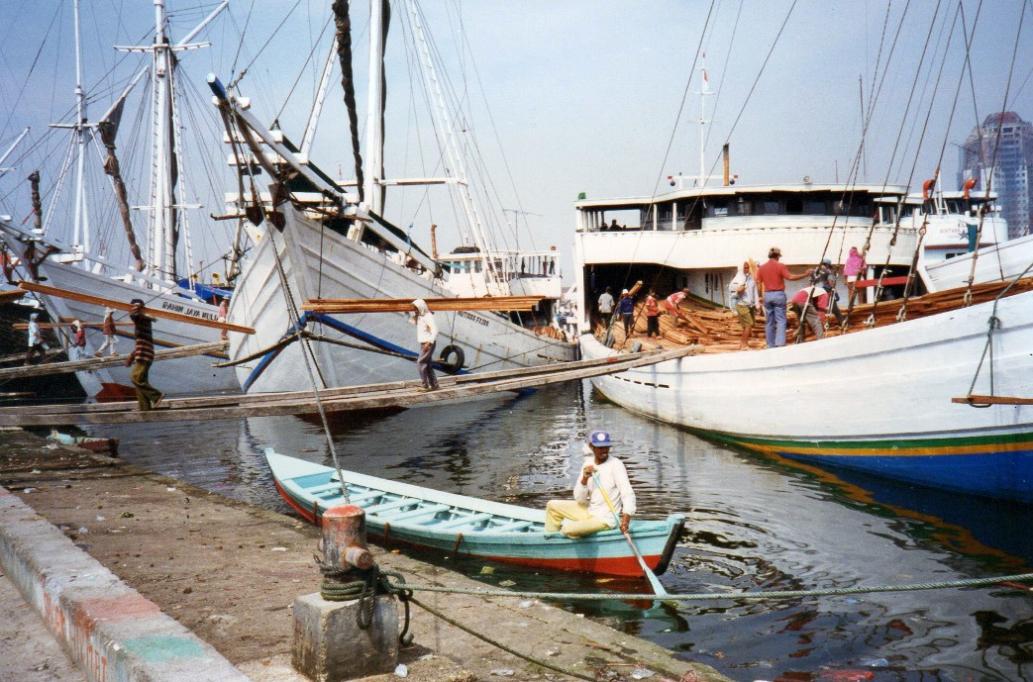 With 17,508 islands Indonesia is the world’s largest archipelago.  It straddles the Equator between the Indian and Pacific Oceans.  Its location has influenced the cultural, economic and political life of its people.  It is a complex tapestry of people, cultures, faiths and traditions – and a land of stupendous variety and contrast.

Travellers who are drawn only to the beaches of Bali and do not venture to explore the archaelogical, historical and artistic sites, not only of Bali but also Java and Lombok, deny themselves  great experiences and considerable enjoyment.  These “snapshots” of a few interesting places may encourage readers to go, and to see, what Indonesia can offer.

This 11th Century temple and funerary complex comprises 10 rock-cut candi carved into sheltered niches in a sheer cliff face.  The niches are about 7 metres high.  (The term candi is usually interpreted as meaning a shrine or temple but according to Dr John Cooke the term originates from the Hindu name for the Goddess most associated with death, Candika, consort of Lord Siva. According to him candi are the home of the Goddess.) 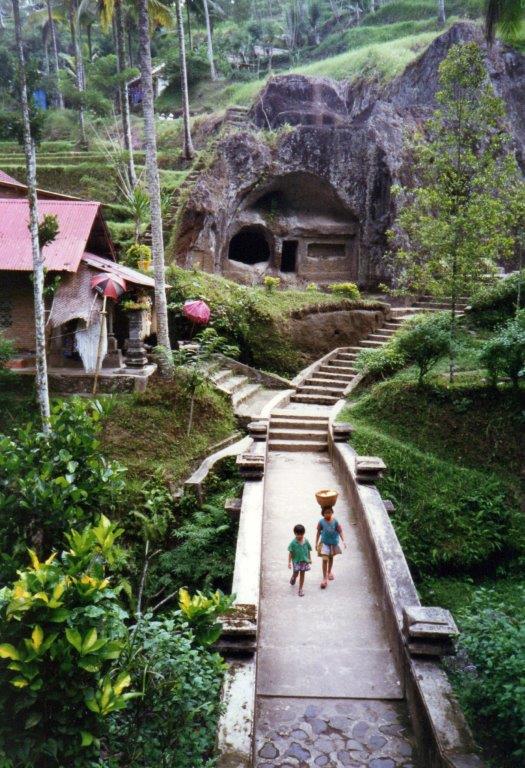 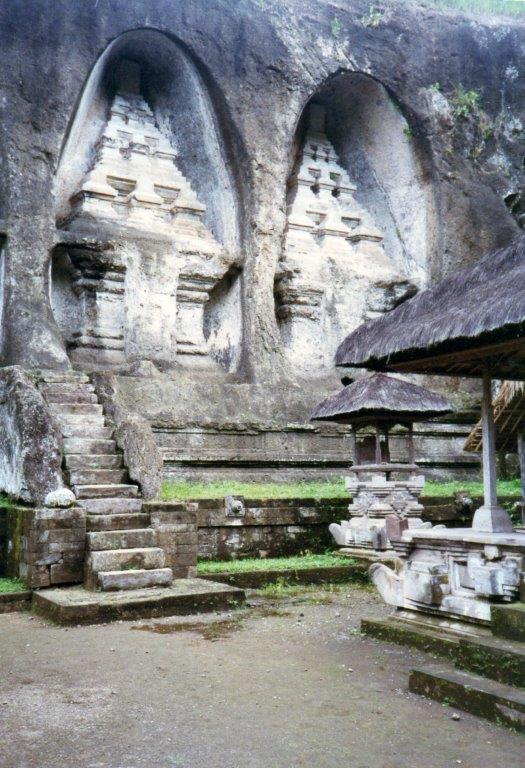 The complex is in Tampaksiring, spread on both sides of the Pakerisan River north east of Ubud in Bali.  It is beautifully situated in a river valley surrounded by rice fields and jungle. The candi are carved to evoke the appearance of temples. There is evidence to suggest that the first set of five were built to honour King Anak Wungsu who ruled over Central and East Bali from 1050 to 1080 CE.  It is possible one was built as a tomb for him and the other four for his wives after his death.

Features a large artificial lake with a visually stunning floating pavilion built in 1774.  Once part of the Balinese  Hindu Kingdom’s royal court in Lombok, it served as a Court of Justice and as a meeting place for Hindu Lords.   It is a pilgrimage site for Lombok Hindus on 24 December each year. 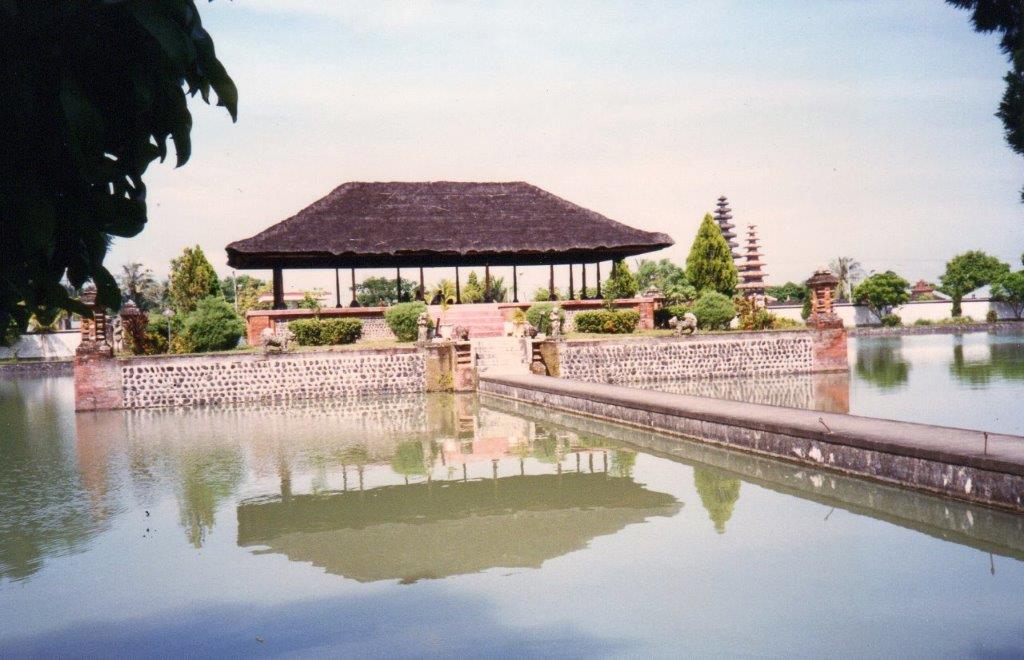 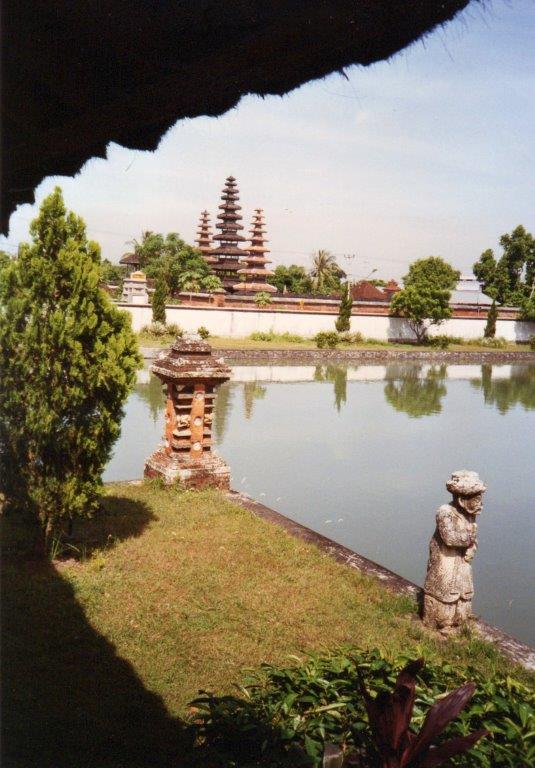 The Prambanan Plain, East of Jogyakata, is the site of the largest concentration of ancient ruins in Java.  Over thirty temples and palaces, both Buddhist and Hindu, dating from the eighth and ninth centuries are scattered over a thirty square kilometre area.  Outstanding among these is the great Prambanan Temple Complex – the largest Hindu Temple site in Indonesia and one of the largest in South-East Asia. 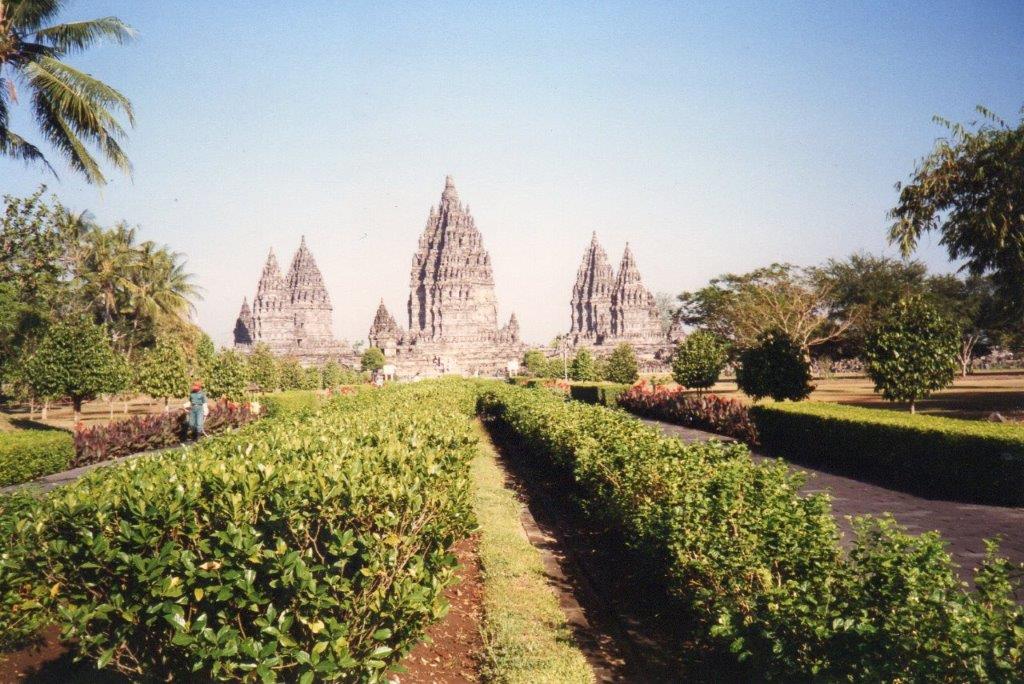 The Temple Complex is approximately 17 Kms. (11 miles) north-east of Yogyakata.  It was completed in the ninth Century and is characterised by its tall and pointed architecture.

Originally there were 240 temples arranged in a square plan.  Only eight main temples and eight small temples have been reconstructed.  The majority of the others have deteriorated leaving only scattered stones.  The complex has been declared an UNESCO World Heritage Site. 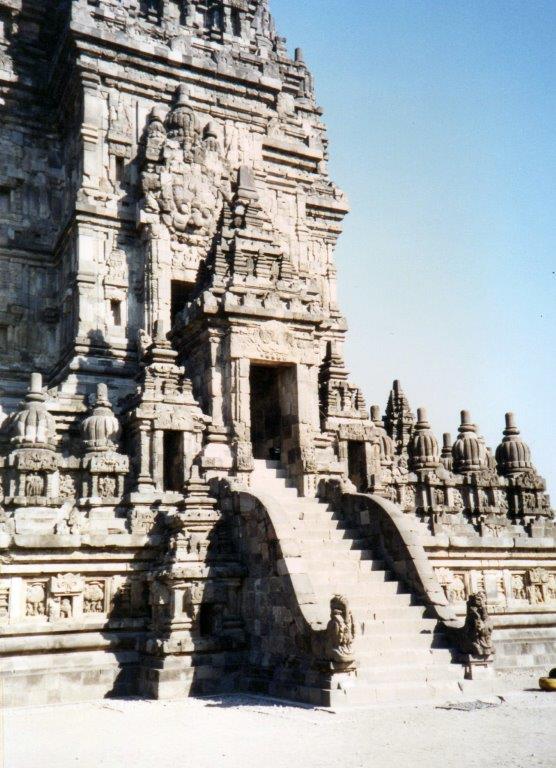 Prambanan Temple Complex - entrance steps to one of the main temples 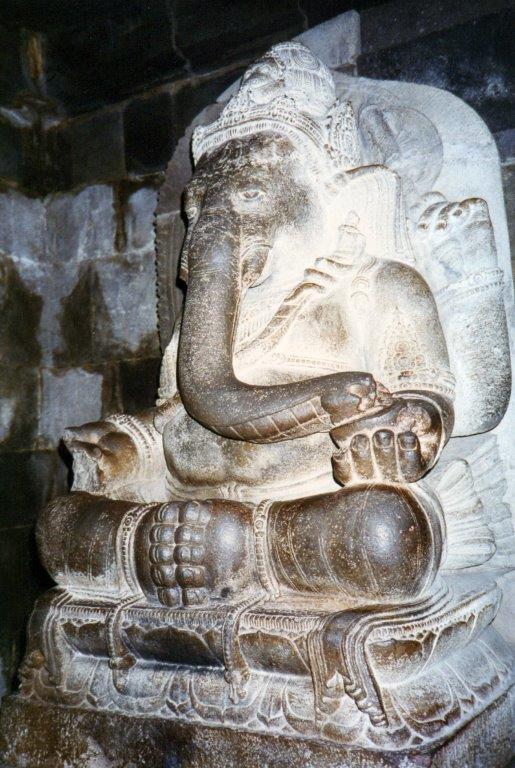 In July 1966 a farmer working with a hoe at the Samibisari hamlet about 8 Kms east of Yogyakarta in Central Java, struck a carved stone which proved to be part of the ruins of a buried temple.  Excavation disclosed a temple about 5 metres underground.  It is thought that the temple was buried by an eruption of volcanic ash from nearby Mount Merapi. The discovery has led to speculation that there might still be other ancient temples in the vicinity buried under volcanic ash. 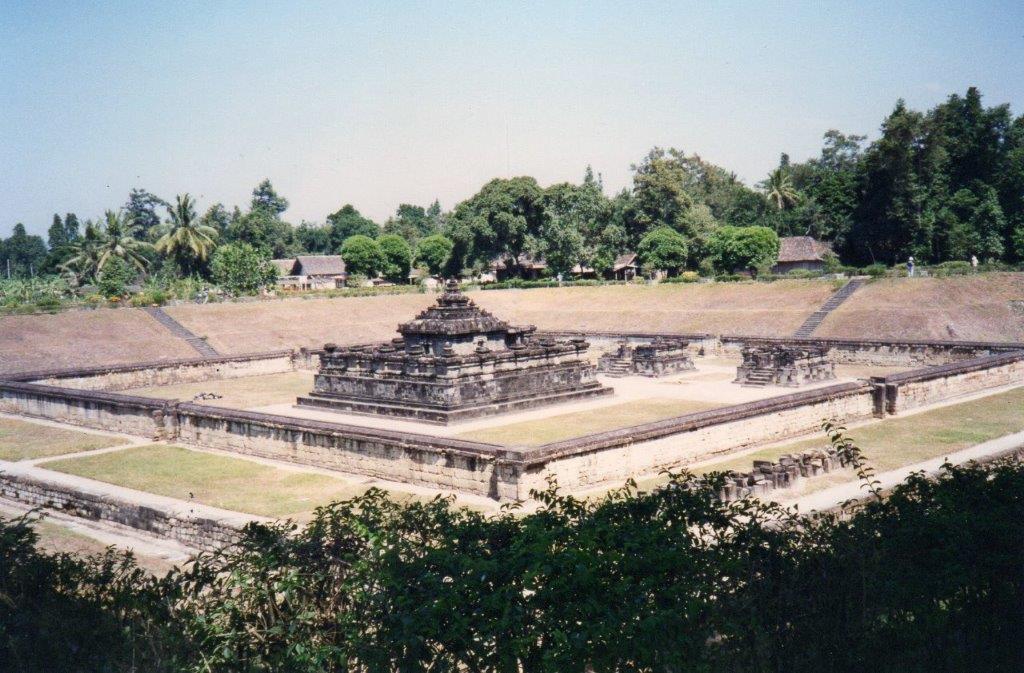 Sambisari - the temple with its enclosing wall

Findings from partial excavation of the site suggest that it was built around the first or second decade of the 9th Century. Visitors must descend a flight of stairs on the western side to reach the central part of the temple which is 6.5 metres lower than the current ground level. The body of the main temple measures  5 x 5 metres. 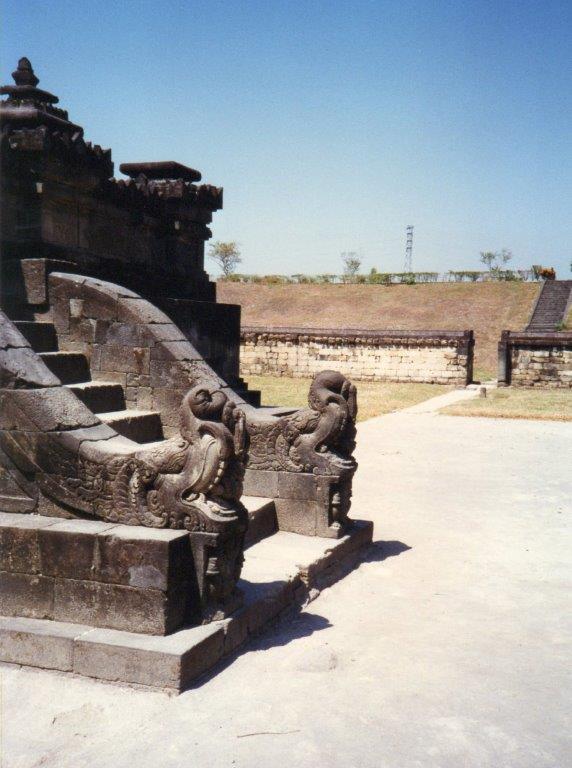 Sambisari - steps up to the entrance to the temple

Sunda Kelapa is the old port of Jakarta on the estuary of the Ciliwung River in Java.  It was the main port of the Sunda Kingdom whose capital was 60 Kms inland to the south on what is the site of modern Bogor. The Sudanese meaning of the original name was Coconut of Sunda.  From the 13th to the 16th Century the port thrived on international spice trade especially pepper, the main spice product of the Sunda Kingdom. In 1527 the port was renamed Jayakarta and in 1619, after being seized by the Dutch East India Company, became the port of Batavia when the Dutch built a new city on the ashes of Jayakarta, which they destroyed.

After the independence of the Republic of Indonesia the name of the Batavia old port was returned to the original name of Sunda Kelapa as a tribute to the port’s long history in relation to Jakarta.

Today the port can accommodate only pinisi, traditional two masted wooden sailing ships which provide an inter-island freight service in the archipelago. 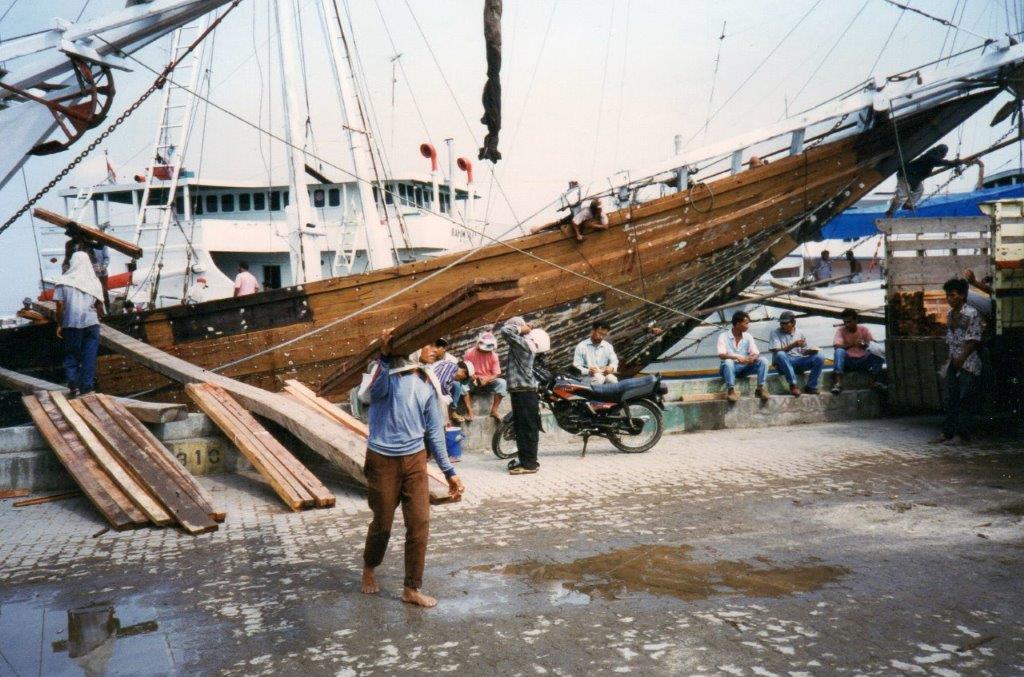 Photographs by George Repin in July, 1996.

BOROBUDUR – the great Buddhist structure in Central Java was the subject of Reflections in Issue No. 167 of Pittwater Online News in June 2014