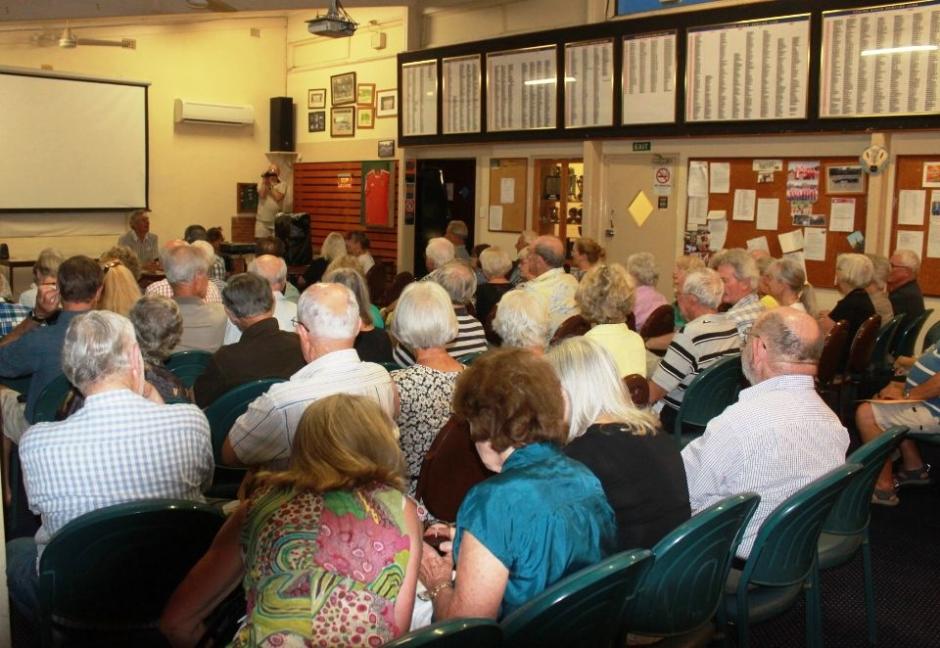 A few months ago Geoff Searl,  the President of Avalon Beach Historical Society, spoke about a then current project as we tramped through the bush on West Head looking for wildlflowers. He had been researching the Stewart Towers, the first lights atop Barrenjoey Headland for a while and, after securing a small grant to help cover some costs, was putting together a film shot by John Illingsworth on what they found. Part of this would be finding some sketches if possible and building a model of the Inner Tower (the one that faced Lion Island and the Hawkesbury River mouth), work which 2015 Maritime Medal recipient David Lyall then undertook.

On Tuesday December 1st, at the General Meeting for the Avalon Beach Historical Society, the efforts of Geoff, John and David were premiered to a full house and very appreciative audience in the Avalon Beach Bowling Club. Geoff's 5000 word document, catalouging his research was made accessible, Mr. Lyall had his model on display and Mr. Illingsworth's film was shown. Geoff's paper, The Stewart Towers on Barrenjoey Headland, will be kept at the Maritime Museum, a copy has been given to the Chase Alive Team, six members of this great local conservation for West Head and Barrenjoey Lighthouse attending the December Meeting, and two copies will be also available in the Avalon Beach Historical Society's Office in ABHS office, part of the society's stalwart John Stone Photography rooms in Bowling Green Lane, Avalon. 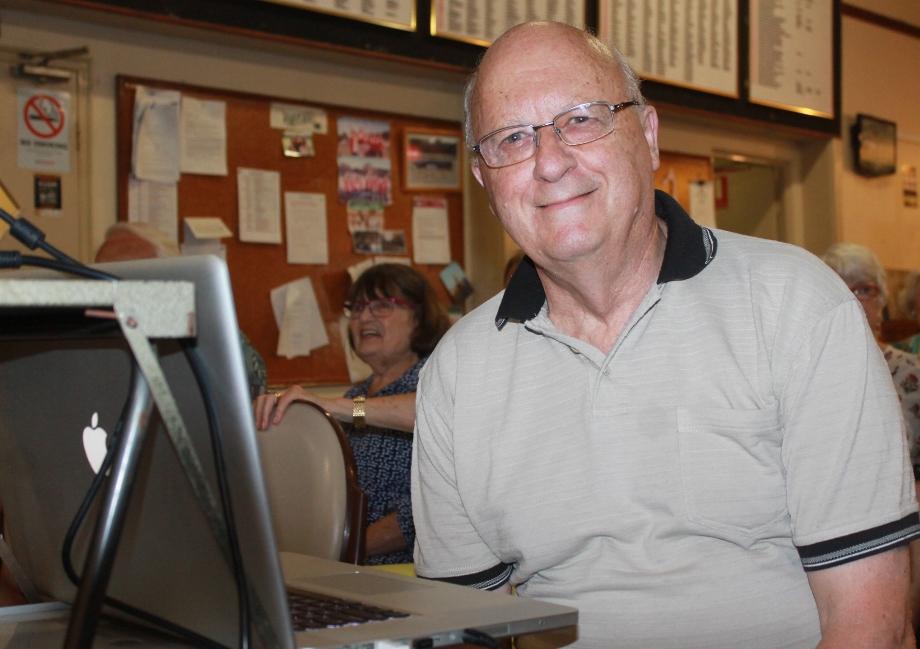 Despite scouring every resource available, any sketches or photographs of the Stewart Towers, and there must have been some, somewhere, could not be located - Geoff Searl asks that if anyone reading this does find some, or know of some, to contact him so they may be added to the record that has been created.

Two bottles, from the Broken Bay Customs Station, have been given to the ABHS and Geoff is also seeking information regarding these - if anyone could put some dates and usage on them. 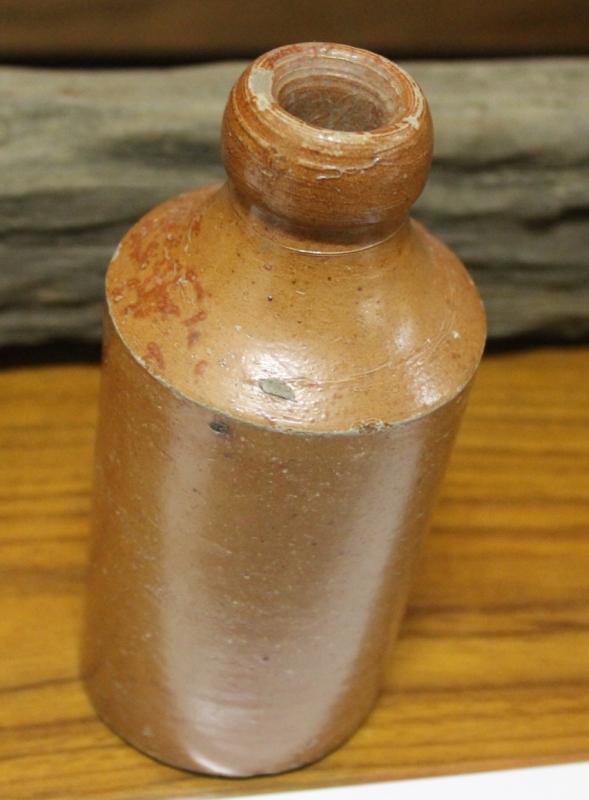 One of the bottles in question - how old is this and what was it used for?

About the Stewart Towers, as Introduced by Geoff on Tuesday evening:

Through the constant lobbying of Robert Stewart the member for East Sydney who had lost his father, William Stewart a master mariner, to the sea in 1820, two wooden structures were erected on the headland. Named the Stewart Towers after this gentleman they were approximately 4 metres and 6 metres in height, made of wood, and painted white.

On and after Monday, the 20th July, two temporary fixed lights will be exhibited on Barrenjuey, the inner south headland of Broken Bay. The lights will be situated E.S.E and W.N.W from each other, at a distance of 180 feet apart, the higher one being 347, and the lower one 315, feet above high-water mark, and they will be visible at a distance to seaward of about 8 miles.

The model was built as per descriptions found through TROVE:

Two lights were exhibited on Barrenjuey, which forms the south head of the entrance into Broken Bay, for the first time, last night. It will, perhaps, be in the recollection of the readers that the sites of these new lights were fixed on the 8th of last mouth, when a party of gentlemen, consisting of the Governor, the Superintendent of Pilots, Captain Hixson, the Colonial Architect, Mr. Barrett, the Engineer-in-Chief for Harbours and Rivers, Mr. Moriaity, Mr. Coles, of the Colonial Architect's Department, Mr. Stewart, M.L.A., Mr. Trunks, M.L.A., and several other gentlemen, went down to Broken Bay in the Government schooner Thetis. The site of both the lights having been fixed, the work of erecting the temporary towers was commenced almost immediately, under the superintendence of Mr. Hudson, of the Colonial Architect's department and they were finished about a week ago.

The towers are temporary structures, the inner one being twenty feet above the rock, and the outer one ten feet.. Each tower is constructed of four hardwood posts, firmly fixed in the rock, which has been excavated to receive them, and they are protected from the weather by sheets of corrugated iron. The lanterns are fixed up on the wooden structure, and about four feet below the lights running round each tower, is a platform from which the trimmer can light and clean the lamps. A sleeping berth for the light-keeper has been fitted up in the larger tower, which is placed at a distance of 1180 feet in a W.N.W". direction from the outer tower. The outer light is 315 feet and the inner one 347 feet above high water mark. 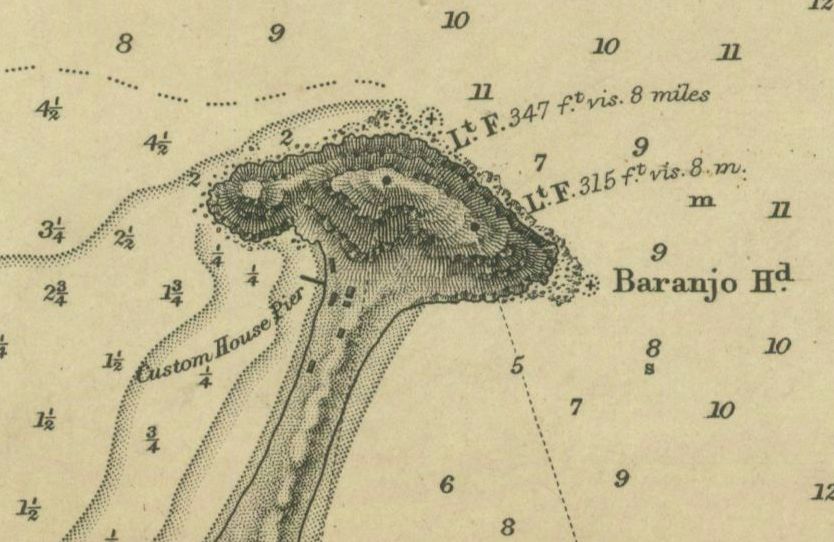 Each tower is furnished with three lanterns lighted with kerosene, to form a fixed bright light, and will be visible at a distance of about twelve miles to seaward. From a notification to mariners in the Government Gazette, we learn that both lights will be eclipsed between the bearings of South mid S.S. E ½ E., to prevent them from being seen over the land which recedes from the Outer South Head, and also to ensure a vessel to pass a safe distance off the South Head, when running with the lights in sight for the purpose of obtaining anchorage in Broken Bay.

The lower, or outer light, will be lost sight of in rounding Barreujuey, but the upper light will be a good guide for coasters bound to Pitt Water, or for large vessels anxious to obtain shelter in Flint and Steel Bay. On Tuesday last the Thetis went down to Broken Bay, taking as passengers Captain .Myhill, Harbour Master of Port Jackson, Mr. Coles, and Mr. Robinson, the manufacturer of the lanterns, when both lights were exhibited for a short time, and their position and bearings examined from various points seaward by Captain Myhill, prior to the return of the steamer to Sydney. It was intended to have a picnic to mark the occasion of the lighting up of these two lights-which, by the way, are to be called " Stewart's Lights," after Mr. Stewart, one of the members of the Assembly for East Sydney, who has been the principal mover in the matter, and had the weather continued fine the Thetis would have gone down to the bay yesterday morning with a number of gentlemen. As the weather proved so stormy, the trip by sea had to be postponed, and Mr. Robinson, and Mr. Mulhall, who has been appointed light-keeper, went overland to light up last night. A notification for the intention to exhibit these lights has been in the papers for a fortnight, but it should undoubtedly have been given much earlier-Sydney Herald,  July 21st. SHIPPING INTELLIGENCE. (1868, July 29). The Mercury(Hobart, Tas. : 1860 - 1954), p. 2. Retrieved from http://nla.gov.au/nla.news-article8853675 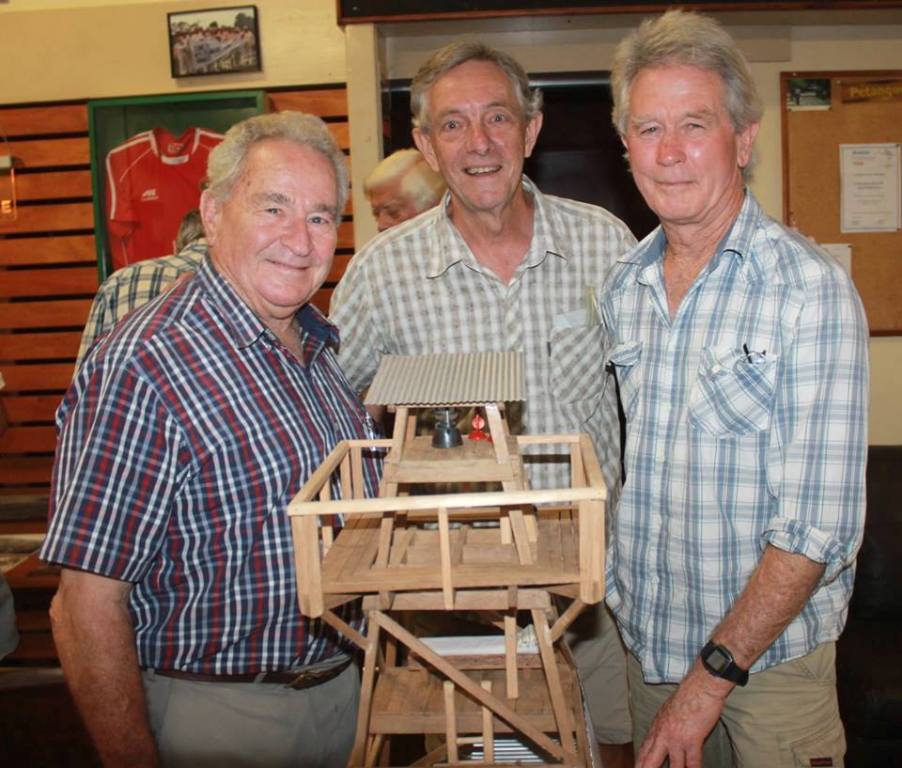 David Lyall, Geoff Searl and John Illingsworth with the Model of the Inner Stewart Tower at Barrenjoey 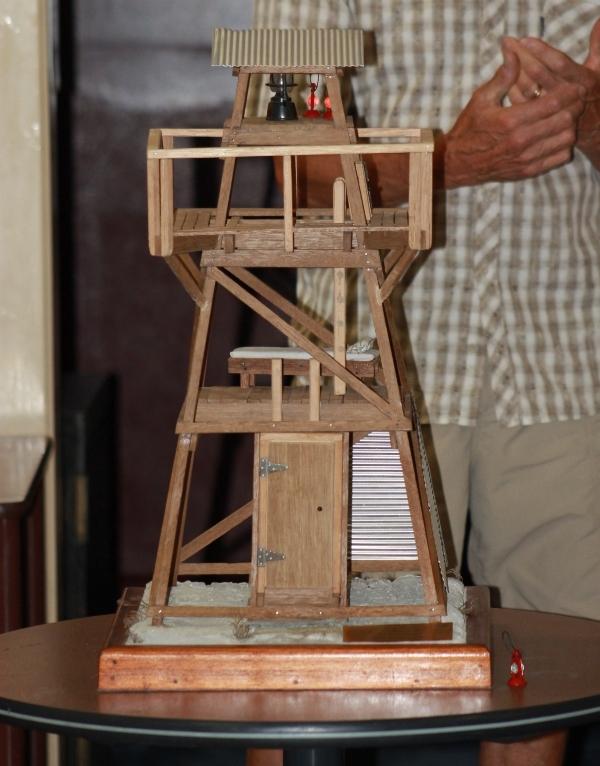 The Tower model in full

The Original Trolley Track at Barrenjoey

The other new information regarding the History of Barrenjoey Geoff presented on Tuesday evening was about the original trolley track which carried materials up the headland during the construction of the sandstone Barrenjoey lighthouse tower and adjacent cottages. This involved 'field work' and part of John's wonderful film shows where Geoff followed his research and images found through research, to uncover the stonework and remnants of the track itself, which wended a fair way from where it was originally thought to be in records prior to this year.

Jervis Sparks, or Jervis 'Barrenjoey' Sparks* as we call him here, kindly provided two pieces of the original trolley track itself to add to the great collection the Avalon Beach Historical Society is Keeping and these were also on display at the December General Meeting of the ABHS. 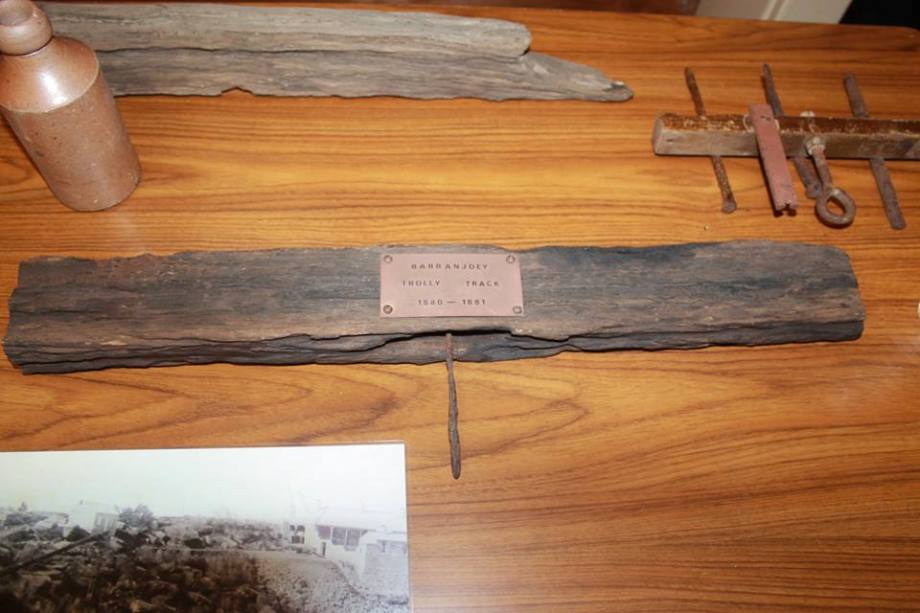 From TROVE once more, a description of this trolley track, from the Laying of the Foundation Stone for Barrenjoey on Thursday April 14th, 1880:

Fortunately for the ladies, Mr. Banks, the contractor, had a " tram-car," or rather trolly, in waiting, upon which they were to be taken to the top. It may be said here that this tramway, the rails of which are of hardwood, is a remarkable evidence of the ingenuity Mr. Banks has exhibited in overcoming the many difficulties in-separable from an undertaking of such magnitude as that of the erection of the Barrenjoey lighthouse. For sometime after the erection of the lighthouse was decided upon it was contended that it would not be possible to have a road constructed by which the necessary materials could be conveyed from the base of the rock: to the site of the lighthouse, and that they would have to be hauled up over the face of the rock ; but Mr. Banks has completely upset this contention. The tramway is 1000 yards long, and is used for the conveyance of everything, except the stone, which is obtained on the top of the rock itself. It has been found invaluable for the purposes for which it was designed and constructed. It is drawn by two horses, which, it may be imagined, when it is stated that some of the gradients are 1 ni 12, have their work to do. The car or trolly is fitted with a brake, which is so powerful that the car can be stopped almost in its own length when going down the steepest incline.

However, this is a digression. The ladies were taken up safely, though not without some misgivings on their part " that the thing would go back." It is questionable if there is along the whole-coast-line a finer view than that which is presented to the eye of the beholder from the top of this Barrenjoey. Away to the north is the north head of Broken Bay; taking this as the beginning of a semi-circle, round towards the left Brisbane-water, the mouth of the Hawkesbury, and Pitt Water are seen in succession, with Mount Elliott (in the form of a lion couchant) guarding the entrance to the second named.

Shortly after the whole of the party reached the top due preparations were made for the ceremony. The crane and other places were decorated with bunting, while the flagstaff was "staggering" almost with flags, amongst them being the figures denoting the motto " Advance Australia," so that ships in the offing-of which there were several would be enabled to read it. After all the preparations had been completed, and the bottle containing the papers, coins, &c, had been placed in the receptacle prepared for it. LAYING the FOUNDATION-STONE of a NEW, LIGHTHOUSE at BARRENJOEY. (1880, April 17). The Sydney Morning Herald(NSW : 1842 - 1954), p. 7. Retrieved from http://nla.gov.au/nla.news-article13458288 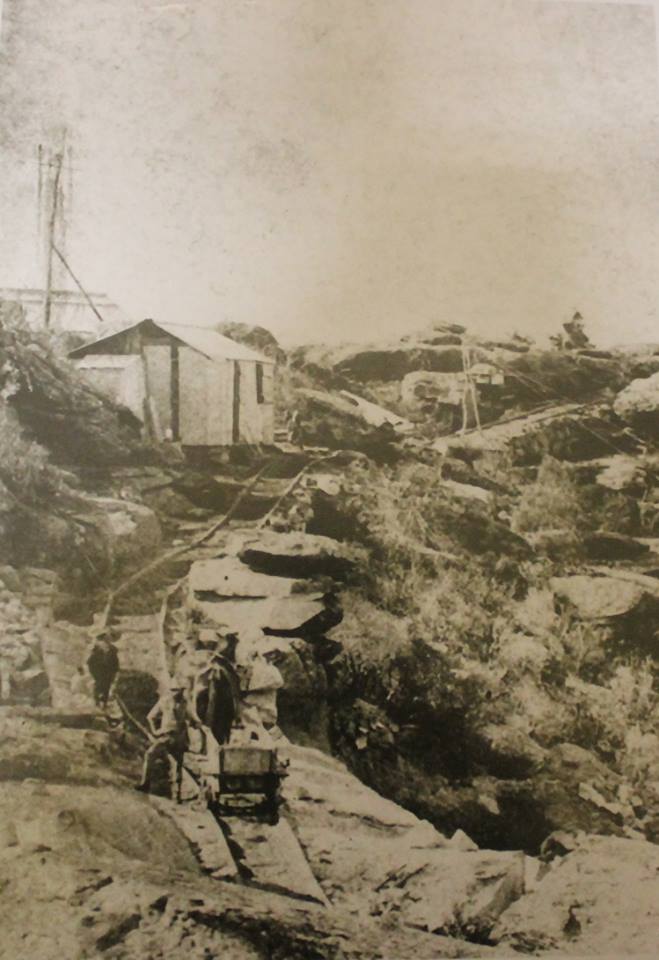 Flagstaffs were also part of this new material ... perhaps best enjoyed in the wonderful film that runs below.

Avalon Beach Historical Society has resources in John Stone's Office in Bowling Green Lane, Avalon Beach - and is open for those interested on Saturday mornings from 10 until 1 p.m. - Geoff Searl, President, encourages students to get in contact and welcomes anyone interested in local history to come along and learn more about this wonderful collection  - the ABHS also holds regular meetings in the Avalon Bowling Club with great speakers and does great exhibitions every few years. Membership is just $10.00 per year.

* Pittwater Online News/Green Wing Press Pty. Ltd. is still working on digitising Tales From Barrenjoey, the now out of print 1992 book written by Jervis Sparks and this should be available in the first half of 2016.

The first navigation lights for Broken Bay, NSW were the twin Stewart Towers on Barrenjoey headland. A history of the lights and of Barrenjoey itself up to the existing lighthouse of 1881. This film was assisted by a grant from Maritime Museums of Australia.

The Mail Route to Pittwater and Beyond

The Red Light Of Palm Beach by Jervis Sparks

Captain Francis Hixson - Superintendent of Pilots, Lights, and Harbours and Father of the Naval Brigade - History