EXCURSION TO BROKEN BAY.
ONE of the most attractive of the provisions made for the enjoyment of New Year's Day, was an excursion to Pittwater and the mouth of the Hawkesbury, in the Illawarra Steam Navigation Company's fast and commodious steamer Hunter. The genial fineness of the weather and the smoothness of the water, offered potent inducements to those who were familiar with all the holiday resorts in the vicinity of Sydney to pay a visit to Broken Bay. The Hunter was accordingly well filled for the trip-indeed, too well filled, as the passengers were in excess of the sitting accommodation. As the excursion was determined on several days ago, the company's largest steamer should have been engaged. There were upwards of three hundred passengers on board, and that number would have been comfortably accommodated in the Kembla. The Hunter left the Phoenix Wharf, under the command of Captain Keft, shortly before eleven o'clock, and reached Broken Bay about one o'clock. On dropping anchor off the Customs Station, Mr. Ross, the coastwaiter came on board and offered his services to pilot the steamer to a part of the Bay where the passengers would, on landing be able to visit the cave and the hole in the rock, objects of much interest to tourists. Some of the party who were acquainted with the locality, stated that that would be the best place to land the excursionists, on account of the vicinity of the cave, and also of the excellent sport obtainable in the way of shooting and angling ; it was, however, decided to take the steamer to the small inlet at Pittwater. Here the boats were lowered, and about half the passengers landed and dispelled in small groups. Most of those who had provided themselves for the excursion soon found out the most cozy nooks under the shade of the rocks, and made hearty meals in the true picnic fashion. The remainder of the afternoon was spent by some of the party in clambering the abrupt embankments and gathering the splendid ferns and palms growing in wild luxuriance; by others in fishing and oystering, and by a few in collecting sea weeds while the less curious preferred a  siesta in the cool shade. In the meantime, the steamer left Pittwater and proceeded for a few miles up the Hawkesbury - not far enough, however, to give the expectant excursionists a very impressive idea of the much-extolled scenery of that river. On returning to Pittwater many of the passengers went ashore and enjoyed a stroll along the beach,-the whole of the party re-embarking soon after five o'clock. A few minutes before six the Hunter steamed out of Broken Bay, and landed all her passengers in safety at eight o'clock. During the outward passage, the wind being light, the motion of the vessel was the occasion   of discomfort to very few on board ; but, on returning, there was rather more motion, though the sea was by no means rough, and the distressing effects were widely experienced- the more so on account of the crowded decks. As the sea voyage was little above an hour in duration, the sea sickness was looked upon as a comparatively trifling inconvenience, and, excepting that there was no band on board, it constituted the only drawback to an extremely pleasant and propitious excursion. The decided success that has attended the trips of the Kembla and the Hunter to Broken Bay will, probably, have the effect of rendering that spot a regular holiday resort.
EXCURSION TO BROKEN BAY. (1862, January 2). The Sydney Morning Herald (NSW : 1842 - 1954), p. 4. Retrieved from http://nla.gov.au/nla.news-article13069605 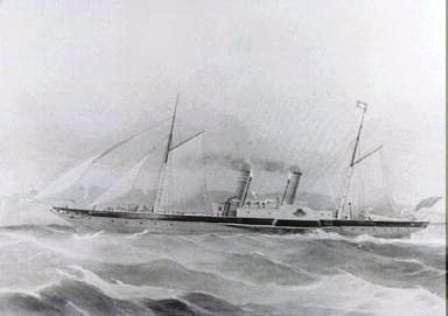 The Hunter was an Iron Paddle steamer, 120 horsepower built by Scott & Co., Greenock Glasgow for Hunter River New S N Co., Sydney. originally and then sold to Illawarra Steam Navigation Co., Sydney in April 1861. She was scrapped at Melbourne July 1904

OCEAN EXCURSIONS.
For the holiday the Newcastle and Hunter River S S Company put on two of their best boats for the Hawkesbury River trips; the Newcastle running to Cowan Bay and the Namoi to Newport, Pittwater. Notwithstanding the prospect of a rough trip the steamers took close upon 1000 excursionists between them, and as the Southerly was fair for the run up there was only a minimum of discomfort. The steamers reached their respective destinations in excellent time and the passengers were enabled to have the pleasure of an enjoyable run ashore for two or three hours. The return journey against a head sea was not so pleasant as the forenoon experience and people who were not good sailors sought " the seclusion which the cabin grants," and took no further interest in the majestic beauties of our bluff headlands. Both boats reached Sydney before 6 o'clock.
OCEAN EXCURSIONS. (1896, November 10). The Sydney Morning Herald (NSW : 1842 - 1954), p. 5. Retrieved from http://nla.gov.au/nla.news-article14074776 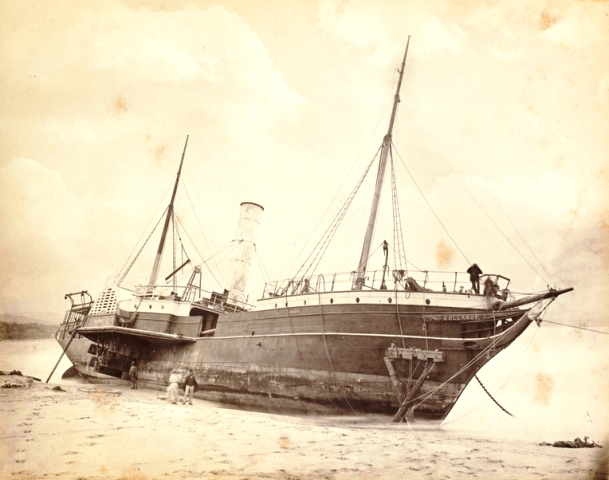 Wreck of the S.S. Collaroy, 1881 / photographer unknown. State Library of NSW Image No: a1528938: A passenger steamer owned by the Australian Steam Navigation Company, built in 1853, went ashore on Collaroy Beach in 1881 and remained there for 32 years, giving her name to the stretch of sand and ocean. When refloated she went back into service plying between Sydney and the Hunter River and visited Pittwater prior to 1881. She was withdrawn from duty in 1886, converted to a schooner, sailed to San Francisco, where she again ran ashore and broke her back on the Californian Coast in 1889.

Pittwater was a destination for excursionists as much as a rural area sending shells for lime, timber and farmgoods to Sydney via steamers. Services to provide transport, outside of those provided by Government in the form of Mail Steamers, were provided by what was in 1862 the Illawarra Steam Navigation Company, and The Newcastle and Hunter River Steamship company as a merger of the Newcastle Steamship Company with the Hunter River New Steam Navigation Company took place on January 1st, 1892, and the Parramatta River Steamers, who ran the Pelican, Florrie and Osprey.

The Newcastle and Hunter River Steamship company had a fleet of steamships carting coal from Newcastle to Sydney for use. Some of these vessels were fitted out with first class cabins. Those that frequented Pittwater as part of their way north were the Hunter, Namoi, Newcastle and Kembla. The Gwydir, Flagship for RMYC 1933 Pittwater Regatta, acquired by the Company in 1922, at 1929 gross tons, must have been one of the biggest ships seen on the estuary.

OCEAN EXCURSIONS.
The s s. Newcastle and the s s Namoi were in readiness yesterday morning to make trips to Pittwater and Newport respectively, but owing to the unfavourable weather neither steamer was despatched.  OCEAN EXCURSIONS. (1893, November 10). The Sydney Morning Herald (NSW : 1842 - 1954), p. 6. Retrieved from http://nla.gov.au/nla.news-article13926211 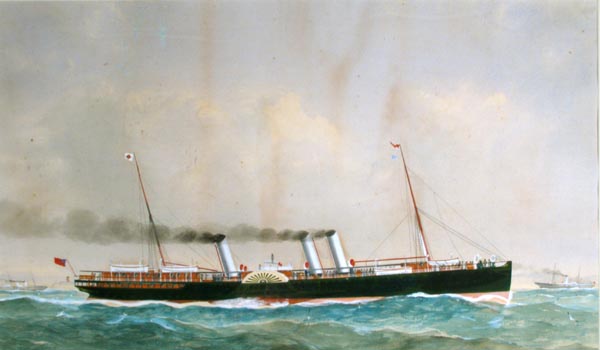 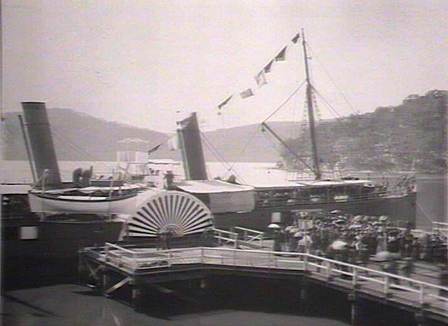 The Parramatta River Steamers Company ran the Osprey and Florrie, the latter being under contract to carry The Royal Mail to residents.

The Royal Mail S.S. “FLORRIE”, under contract with her Majesty's Government, will run as follows, commencing on SATURDAY, 2nd August. 1879:-From Gosford Wharf, on THURSDAYS and SATURDAY'S, at 8 a.m., touching at Blackwall, and arrives at the head of Pittwater, at about 11 a.m.; from Brisbane Water, passengers will be conveyed by waggonette leaving Pittwater immediately after the arrival of the Mail steamer from Gosford and passengers from Sydney will be conveyed by waggonette leaving Post-office, Manly, as 8.20 a.m. for Pittwater, and thence by Mail Steamer to Brisbane Water. The steamer conveying the Mails from Sydney leaves Circular Quay at 7 a.m. Advertising. (1879, August 2). The Sydney Morning Herald (NSW : 1842 - 1954), p. 1. Retrieved from http://nla.gov.au/nla.news-article13448783

The Osprey was a wooden steamer of 35 tons built in Berry’s Bay, 1879 for the Parramatta River Steamers.

Osprey Steamer begins in Pittwater. THE means of communication between Sydney and Gosford, the Lakes, Pittwater, and the Hawkesbury, will now, it appears, be made more satisfactory to those who desire to visit these picturesque districts. Hither to bi-weekly communication has been maintained by the steamer Pelican, plying to Barranjouie, at the entrance of the Hawkesbury, and from thence across the bay to Brisbane Waters, which is entered over a bar by a narrow tortuous channel with only four feet of water at low tide. Across this bar the sea breaks very heavily when there is a southerly swell. From the peculiar nature of the place, it is at present considered unsafe, except in very fine weather, for vessels except those of very light draught and possessing good steering qualities to enter the and it has been found that excursionists and others' object, except as a matter of necessity, to take the sea trip of about twenty miles from Sydney Heads in steamers of a small class. To meet this difficulty, and in the hope that during the ensuing Season a considerable number of persons may be induced to visit the Hawkesbury, the owner of the Parramatta ‘Volver’ and Brisbane Water line of steamers has had a steamer of great speed and comfortable accommodation built recently by Dunn and Co., of Lavender Bay. This, steamer is named the Osprey, and she has been sent to the Hawkesbury, where she will remain if the inducements offered during the ensuing Season prove sufficient. Passengers to and from Sydney will be conveyed by Mr. Eiaser, of Manly, by Vehicle, from Manly Point, at 8 a.m., on Tuesdays and Fridays, to Pittwater. The Osprey will take them down the Pittwater estuary to Barranjouie, where they will be transferred to the Pelican, which will arrive at about the same time from Sydney. The Pelican will go across the bay and bar to Gosford, and return after a few hours delay at Brisbane Water, and meet the Osprey again at Barranjouie, where the passengers who prefer the lake and land to the ocean trip will have an opportunity of transhipping and arriving at Manly about dark. If the road is improved with the money voted by Parliament for the purpose, there is no reason why the conveyance, should not catch the 5.80 .steamer from Manly. This would then be one of the most enjoyable trips that could be imagined but, if this is not done, it will involve a night's lodging at Manly or a special conveyance to Sydney. While the Pelican is going from Barranjouie to Gosford and returning, the Osprey will make a trip, if inducement offers, about twenty-five miles up the Hawkesbury, and occasionally go all the way to Windsor, leaving the Pelican to fill her place in taking overlanders from Barranjouie to Pitt Water. It is to be hoped that the enterprise of the owner of this line of steamers, in putting on such a fine steamer as the Osprey, will be appreciated, and that the good beginning thus made may lead to the further development of the beauties and resources of Brisbane Water and its surroundings. NEWS OF THE DAY. (1879, July 14). The Sydney Morning Herald (NSW : 1842 - 1954), p. 5. Retrieved January 20, 2012, from http://nla.gov.au/nla.news-article13438428 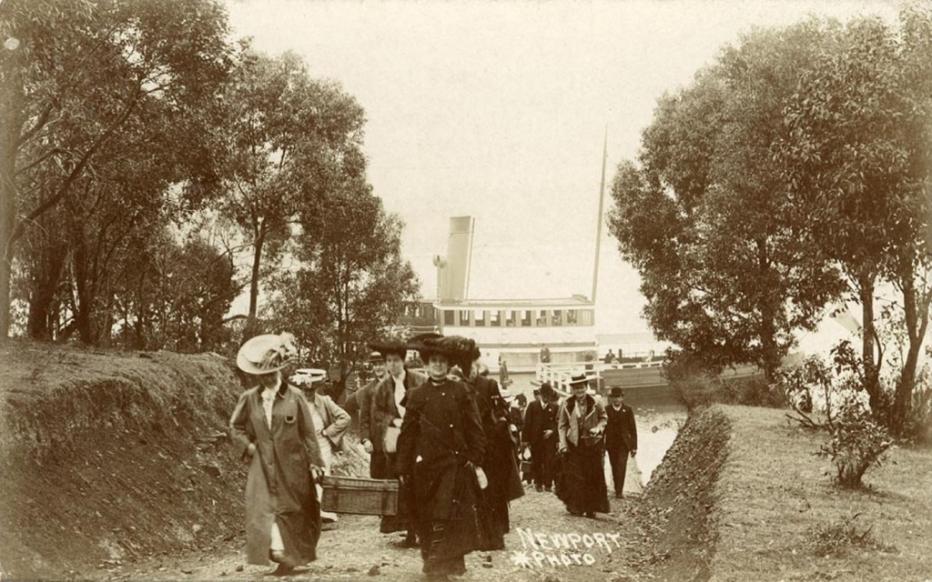