Once a three storey building now with four-storeys (including basement and turret) beachside mansion the block for this building was purchased by Lawrence Gallagher in 1915 when Palm Beach was being sold as the ‘Palm Beach’ of Australia to attract buyers by likening this beautiful Pittwater beach to the Palm Beach in Florida, USA.  Naming the house, 'Florida House’ was in keeping with the intentions of those selling land at 'Palm Beach'.

Although it is stated by some sources to have been built early in 1916 when Lawrence was actually serving overseas, Mr. Gallagher may have already been working for one of the main builders of premises in this hilly area after the initial 1912 land sales, Albert Verrills.  Laurie, sometimes spelt ‘Lawrie’ was employed building roads and structures around Palm Beach. Family records of the Verrills state it was Albert Verrills who helped in the construction of Florida House, one of the first of many homes he built in the area, and Laurie Gallagher, who completed the stone works.

There was also a Florida House at Vaucluse which was utilised by many ‘coming of age’ young gentlemen and ladies and end of school celebrations or for wedding receptions a few decades later.

Laurie Gallagher was born in Linlithgow Scotland, 1891. He enlisted in the AIF in August 1915, aged 24 years and two months and left Australia on board HMAT A32 Themistocles on 5 October 1915. His occupation is listed as 'stonemason':

He was enlisted in the 5th Pioneer Battalion but served in the 1st Battalion, 11th Reinforcement SIF WWI and was then moved to the 53rd Battalion, an extension of the 1st. Raised in 1916 for service during World War I the battalion served on the Western Front until the end of the war, before being briefly amalgamated with the 55th Battalion and then eventually disbanded in 1919. It is likely that he met Carl Gow while serving in the 55th as both came to live in Palm Beach after WWI. This Battalion fought in some of the battles of WWI on the Western Front and suffered heavy casualties. Lawrence 'Laurie' returned to Australia on June 2nd 1919. In 1924 he married Babette Bruggen, the marriage was registered in Warringah.

Photographs of PBSLSC founding members from 1921-1922, which include him show a wiry man with a cigarette perpetually in his mouth. 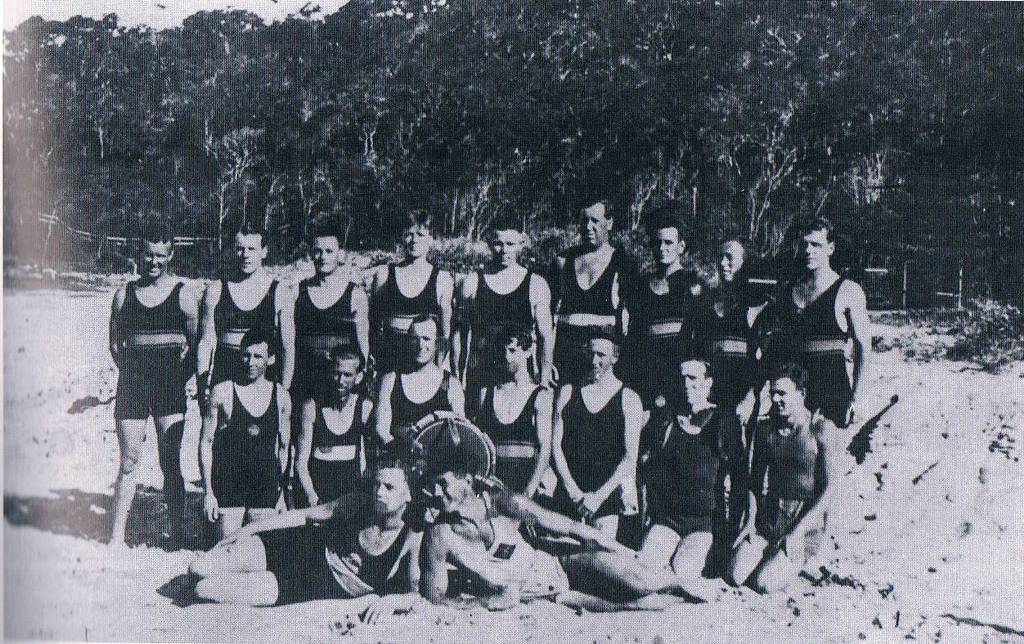 Laurie is second from right in row of gents kneeling.

Mr Gallagher also built a house at 79 Florida road, "Kookaburra". This was he and his wife’s premises while Florida House was built for accommodating expected summer guests. Laurie Gallagher was a permanent resident, one of the men who attended the first meeting of the Palm Beach SLSC founders and among the first Bronze Medallion passes in January 1922.

61. Palm Beach Progress Asst. 2/1/1926. setting out the matters which the Association desires the Council to give attention to Resolved, - (Crs. Hitchcock. Simpson) That a "Caution - Drive Slowly" SIGN that the requested notice be erected on Ocean Road; for the extension of Ocean Road northward to Phillip Park be referred to A. Riding representatives for their consideration, and that the Association be informed of the of Council's intentions regarding the other matters.

10. Resolved, - (Crs. Hitchcock, Hope) That tenders be called, for the construction of Ocean Road from the intersection of  Palm Beach Road northward, in accordance with the Engineer's Report.

46. E. Kenny 28.6.26. submitting, on behalf of Palm Beach  Lands, Ltd. plan of subdivision of about 2 acres of land, between Nos 2 and 3 Subdivisions of Forssberg Estate' (Dealt with in Engineer's report)

Two tenders were received for the construction of Ocean Road, Palm Beach, and it was resolved, - (Crs. Simpson,. Hitchcock) That the lowest tender, that of L. Gallagher for £399/10/.., be accepted, and the Contractor be notified not to touch the big boulders on the beach, and that this be made a part of the Contract.

Completed by later that year as the Minutes of 6th of December, 1926 record
6-. Resolved, - (Crs. Simpson, Hitchcock) That £20 extra be voted for making trafficable that portion of Ocean Road  (Vote) outside of Gallagher's Contract.
It is likely that this work helped to pay for the building of Florida House, although one person perhaps employed in the Ocean Road works has clearly taken off with more than their wages:
Manly.—A warrant has been issued by the Manly Bench for the arrest of DAVID PIGGOTT, charged with stealing the sum of £40, the property of Lawrence Gallagher, at Palm Beach, on the 27th ultimo. -Offender is 40 years of age, 5 feet 9 inches high, stout build, fair complexion and hair, blue eyes, clean shaved; dressed in a dark suit, and a grey felt hat; walks with a slight limp; a labourer. Complainant, Lawrence Gallagher, Palm Beach.  Offences not otherwise Described. (1927, September 21). New South Wales Police Gazette and Weekly Record of Crime (Sydney : 1860 - 1930), p. 540. Retrieved from http://nla.gov.au/nla.news-article252093936
The first published advertisement, under the Gallaghers, appears in 1929; 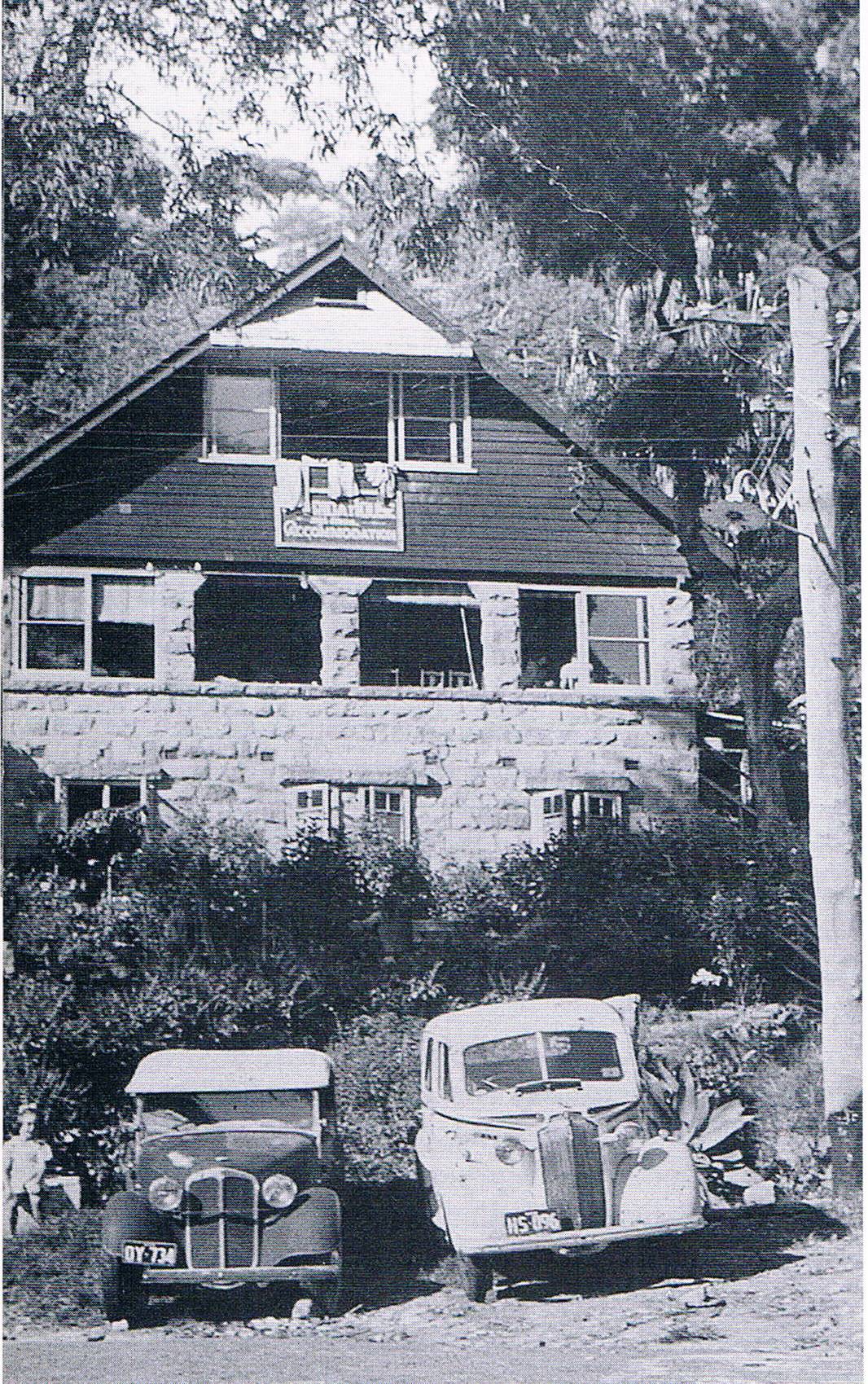 Current owner Gretel Pinniger, who generously allowed us to photograph this grand old building, stated that when she renovated the premises several years ago the top floor was a series of ten small rooms all with dormer windows with a passageway down the centre. The National Trust listed stone walls, quarried from the site itself, are 40cm thick. A water catchment trap, on the northern border of the block, may have been installed after this incident;

QUEENS-SQUARE JURY COURT.
(Before Mr. Justice Stephen and Jury.)ALLEGED DAMAGE BY FLOODING.
Hinds v Warringah Shire Council.
The plaintiff in this action, who is the owner and occupier of a dwelling and grounds adjoining Florida-road, Palm Beach, sued the Council of the Shire of Warringah, the local authority controlling the area, to recover £400 damages for Injury to her property, alleged to have been caused by overflows of flood waters from the street. Plaintiff alleged that by unskillful alterations of the levels and formation of Florida-road, rainwater accumulated in certain parts of the road, and, encroaching upon her property, caused wash aways of soil, damage to a tennis court, and pollution, which rendered occupation of the dwellings and buildings on the land unsafe. The defendant council, in addition to statutory defence, pleaded not guilty of the negligence alleged. Mr. Monahan, K.C., and Mr.Alan Lloyd (Instructed by Messrs. Bradley,Son, and Maughan) appeared for the plaintiff; and Mr. Maxwell, K.C., and Mr. Henry(instructed by Messrs. J. W. Maund andKelynack) for the defendant council. Jun 17th 1930, Sydney Morning Herald.
The case Is part heard.
The jury returned a verdict for the plaintiff for £40. An application for an injunction was adjourned, to be restored to the list if desired on notice. June 20th 1930

This wasn't the Gallaghers only contact with Warringah Shire Council. From their minutes; 'That, as recommended a notice be served on L. Gallagher to render his premises,, "Florida House" boarding-house, Palm Beach, fit and sanitary. 18/03/1929

The problems with water running through the land were inherited by the current owner and perhaps contributed to those she purchased it from disposing of the property. Another Warringah Minutes item of 1938 refers to Dr and Mrs Dansay, having a premises opposite Florida House, offering to contribute to kerbing and guttering costs.

In 1931 new light was shed on the world inside Florida House;

During the early 1930's, despite Depression era fiscal problems and the lack they brought with them, Palm Beach was in full swing during the 'season' with Florida House one of a handful of 'guesthouses available:

INSPECTOR'S SUPPLEMENTRY REPORT was dealt with as follows:. 1. Reporting on a nuisance existing at the boarding house "Florida House"; Palm Beach
: Resolved, - That the Proprietress, Mrs. Gallagher, be severely reprimanded, that she be warned a repetition of the offence will be followed by prosecution, and she be required to make provision immediately for the removal and disposal of the garbage from her premises. (Crs. Butcher; Batho)  07/03/1939

Mrs Gallagher, sometimes listed in advertisments throughout the 1930's as Mrs B Gallagher, must have been running the boarding house business while Laurie worked; CONTRACTS LET. Architects have let contracts, as follows:  and to L. Gallagher, Palm Beach, for excavations and Improvements at the Barker College. Hornsby. CONTRACTS LET. (1937, June 1). The Sydney Morning Herald (NSW : 1842 - 1954), p. 6. Retrieved from http://nla.gov.au/nla.news-article27983742

Florida House was filled to capacity by those who could afford the tarriffs. During the 1930's Palm Beach as a preferred holiday destination became the place to be or be seen. People of means travelled from all over Australia to spend 'the season'. Despite a down to earth attitude to life and genuinely genteel society, sensational reports in media, notably about the now infamous Field Vs. Field divorce, in which many Palm Beach regulars were called to give evidence justified notable prying envy. Florida House, already colourful due to the disposition of its proprietors, becoame part of this gossip too; 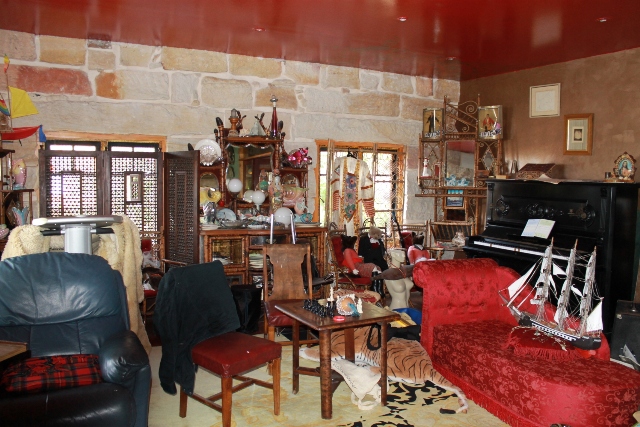 FIELD V FIELD. The hearing was-continued of the consolidated suit In which Ivy Gladys Field and her husband. Sydney John Field, are both petitioning for divorce on the ground of adultery, the wife adding the issue of cruelty.... During the first week in January, continued witness, he went to see the Powells at Florida House, Barrenjoey. Mrs. Field was there, and declined to return his salutation. She said he had told her husband something, but re-fused to say what it was. Then she remarked, "Well, anyway, please get this into your mind, I am not for sale." Witness said, "You seem just as crazy as your husband." IN DIVORCE. (1931, December 10). The Sydney Morning Herald (NSW : 1842 - 1954), p. 6. Retrieved from http://nla.gov.au/nla.news-article16804010

HOUSES ÏN DANGER  Several homes were in danger when bush and grass fires reached their height in Florida Road, Palm Beach Brigades from Headquarters, Avalon and Narrabeen were, called out. Assisted by police and civilians, they burned the fire back into the wind to save the houses. Brigades Fight More Than 30 Scrub Fires. (1944, December 23). The Sydney Morning Herald (NSW : 1842 - 1954), p. 4. Retrieved from http://nla.gov.au/nla.news-article17932772

Besides accommodating those who could afford the tariffs, which had risen by 1954:

*'Home away from home' was a term used by PBSLSC and Pacific Club members who were guests during the late 1940's and 1950s.

Florida House, 2012; Kookaburra to left. Photo by A J Guesdon. 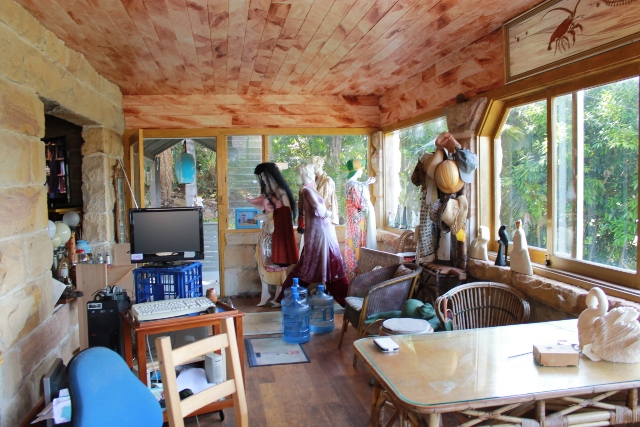 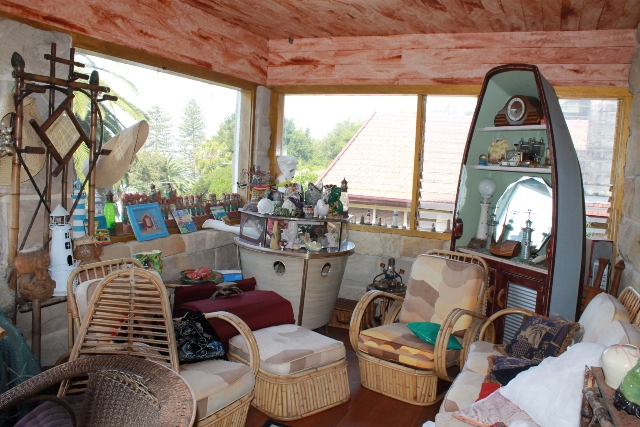 Closed in Front Verandah of Florida House, November 2012. Photos by A J Guesdon.

The Front of Florida House. Photo by A J Guesdon.

Back external of Florida House showing Turret. Photo by A J Guesdon. 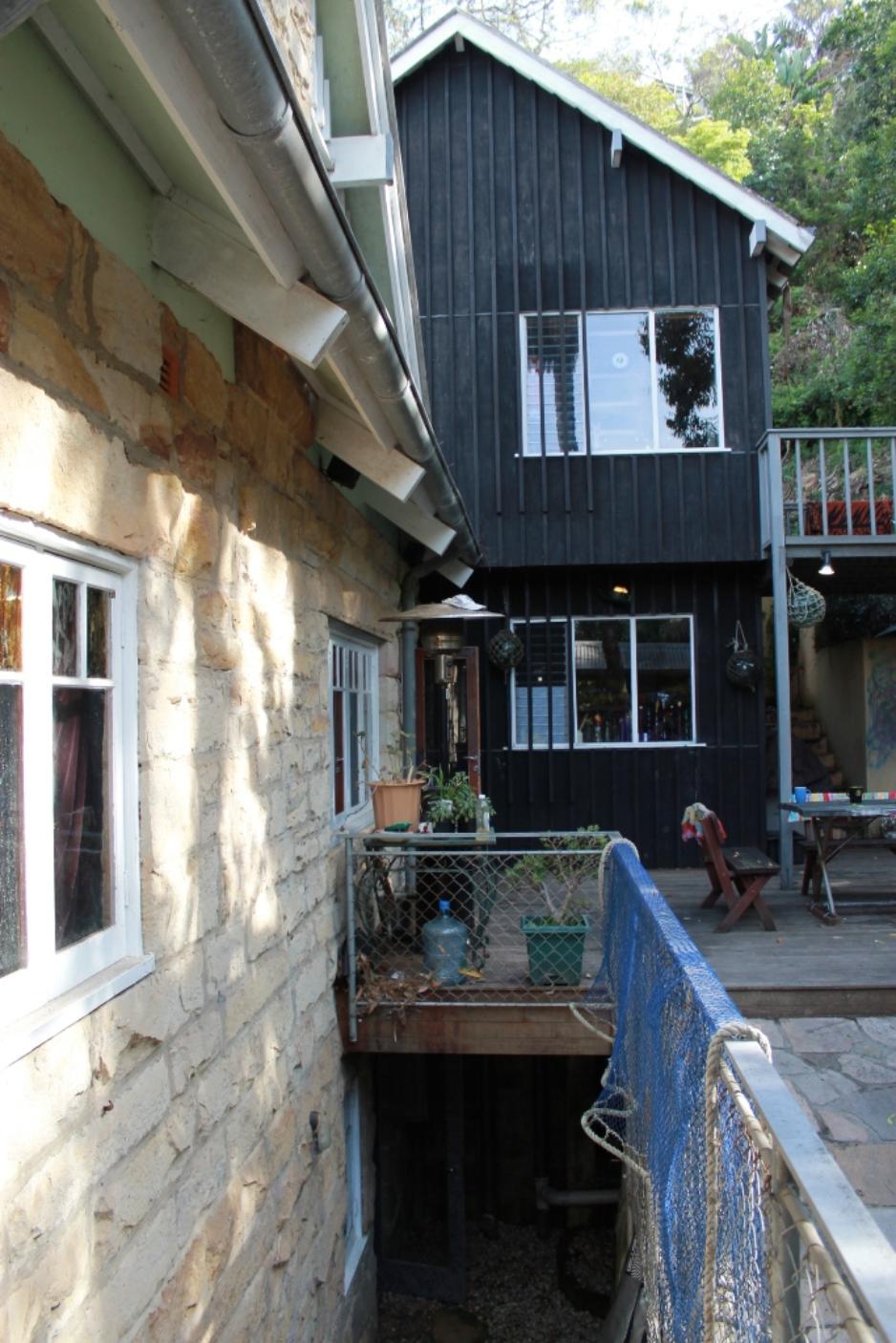 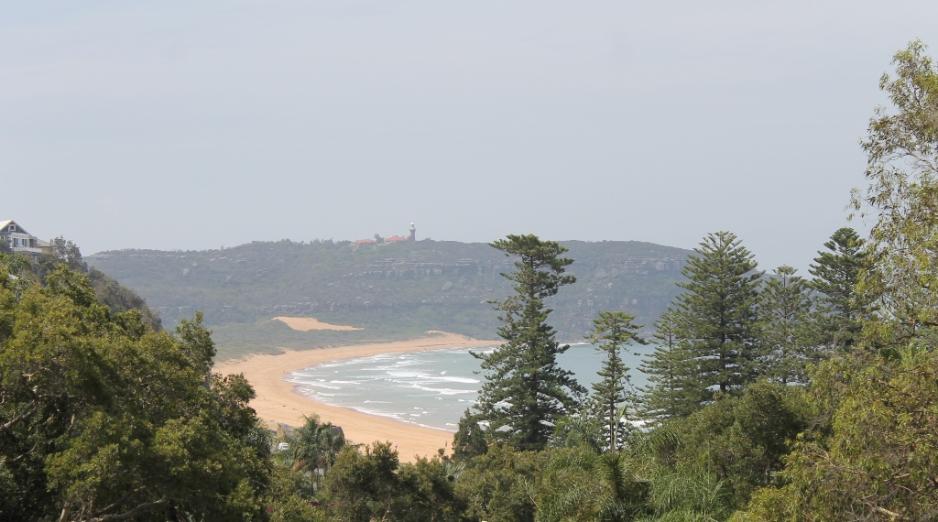 View from Attic Room of Florida House, November, 2012. Photo by A J Guesdon.