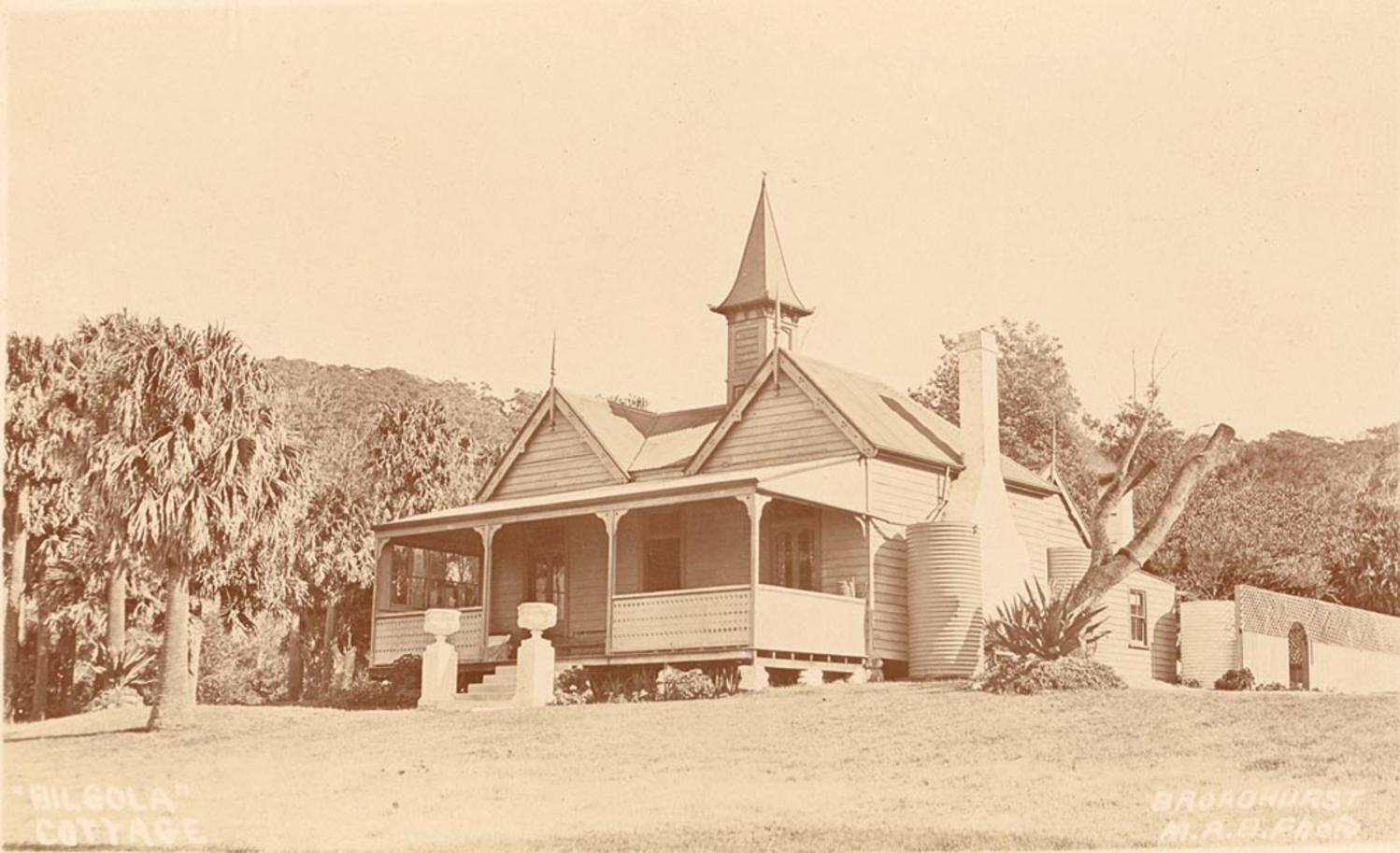 Built to be a weekender by W B Dalley the revered Manly politician and lawyer, the premises was a quiet reclusive place with a creek, palms and ferns and lawns that ran down to the beach. Throughout this weekender's cottage and holiday house status, it has been the beauty of the garden's grounds and beach it resided beside that were emphasied by anyone speaking of Bilgola cottage and house.

Dalley's tenure and enjoyment was short lived though as he passed away 28th of October 1888. The property had already been placed on the market in January 1888, so it may have been built to be sold or Mr Dalley, said to be heartbroken when his wife Elanor died of typhoid in 1881, leaving him to look after their six children. Mr Dalley retired from public life for a few years, came back and built a castle at Manly and a cottage at Bilgola. In 1887 he became quite ill and may have sensed putting his affairs in order was sensible.

PITTWATER TALLAMALLA. The MARINE YILLA owned by the Right Honourable W. B. DALLEY. This PROPERTY has about l8 ACRES LAND, and Is divided into two portions by the MAIN PITTWATER ROAD. It is the PICK OF SPOTS along the northern coast, and OMI large frontage to Bilgola Bay, with the best fishing grounds the most enthusiastic disciple of Isaac Walton could desire. There are TWO RESIDENCES, one for the caretaker, and the other for the owner's use. The PALM GROVES and FERNS on this property are a marvel of semi-tropical growth. The SOIL is equal to any of the richest Illawarra land. MILLS and PILE have been instructed by the proprietor to sell by auction, at the Rooms, 130, Pitt-street, on THURSDAY", 2nd February, at half-past 11 o'clock, TALLAMALLA, the MOST CHARMING MARINE VILLA SITE IN THE COLONY. PLANS and Particulars at the Rooms. Advertising. (1888, January 18). The Sydney Morning Herald (NSW : 1842 - 1954), p. 14. Retrieved from http://nla.gov.au/nla.news-article13664294

when W B Dalley made his will on 18 November 1887 he stated that ‘my residence at Manly and my property at Pittwater known as Yellambi may be sold..’ There was no mention of any property called ‘Tallamalla’, the name under which the Bilgola property was subsequently offered for sale. The reason for the discrepancy is unknown..
From MW&PHS, Bilgola. Peninsula Historian Newsletter. VOLUME 3  NO. 9, SEPTEMBER 2010. George Champion. Edited by Tony Dawson. 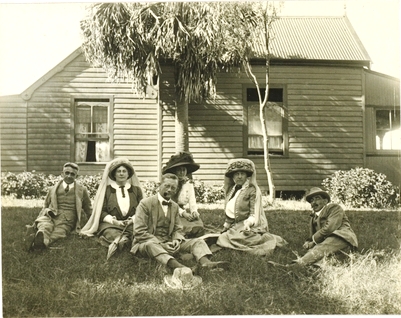 March, 1911 side view of house from Allen Family Album 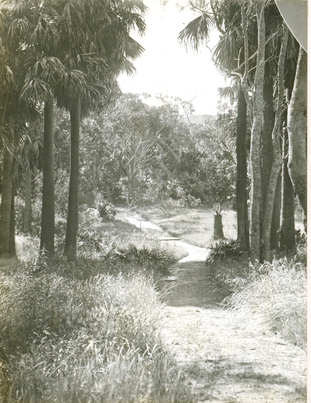 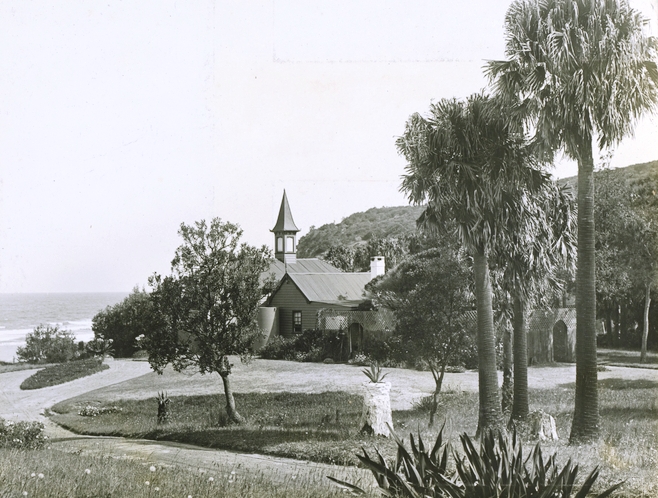 Above and Below from November, 30 1913 From album 63 of Allen family albums 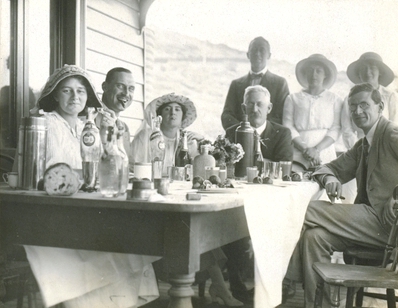 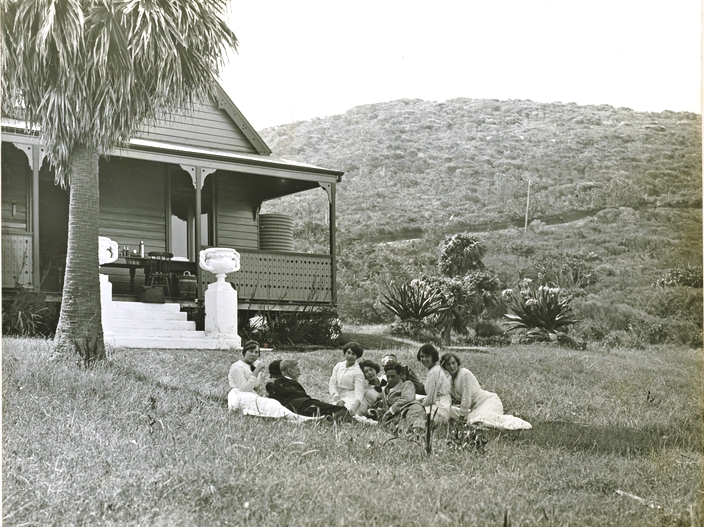 Australian aviator Colonel Walter Oswald Watt purchased the property and spent many a great time there, entertaining until he struck his head when diving in for a swim on May 21st 1921 and drowned. The week-end bungalow at Pittwater known as Bilgola, once the property of the late Mr Walter Oswald Watt, will come under the hammer, in the rooms of Raine and Horne on December 8th. REAL ESTATE. (1921, November 12). The Sydney Morning Herald (NSW : 1842 - 1954), p. 11. Retrieved from http://nla.gov.au/nla.news-article15980807

John B. Dalley, a son of W B Dalley, made some remarks on Watt's life at Bilgola. He wrote:
‘For a man of the world who had known luxury in most parts of the civilised globe he lived in greater discomfort than anyone I ever met. He loved Bilgola where he lost his life, and worked hard to beautify it - outside. But when it was suggested to him that the addition of a few ele-mentary articles of furniture might improve the place, he said; 'Good Lord, man! You'd ruin it!'
From MW&PHS. Bilgola. VOLUME 3  NO. 9, SEPTEMBER 2010. George Champion. Edited by Tony Dawson.

By Col. Watts time the property had shrunk from its original 18 acres to 6; This firm will next Thursday offer at auction In their rooms a number of properties, including Bilgola, the week-end home of the late Mr. Oswald Watt, at Pittwater. This is a charming home, with about six and a half acres of land, laid out in garden, lawns, and groves, for which there has been good Inquiry.

There was further subdivision planned by the new purchaser Harry James Brigden brought the property and subdivided it and placed twenty eight lots on the market by February 1922. Hannah Maclurcan, proprietor of the Wentworth hotel, and Robert Lee, who listed his occupation as ‘gentleman’ purchased most of these. Hannah was a self-made lady whose very popular cooking book, cited by some as the first example of Australian recipes, ran to several editions. 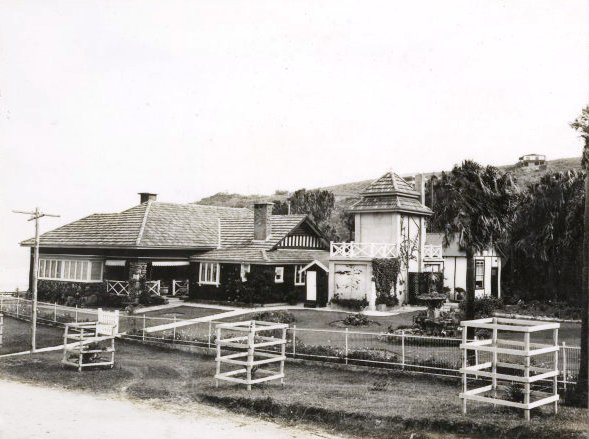 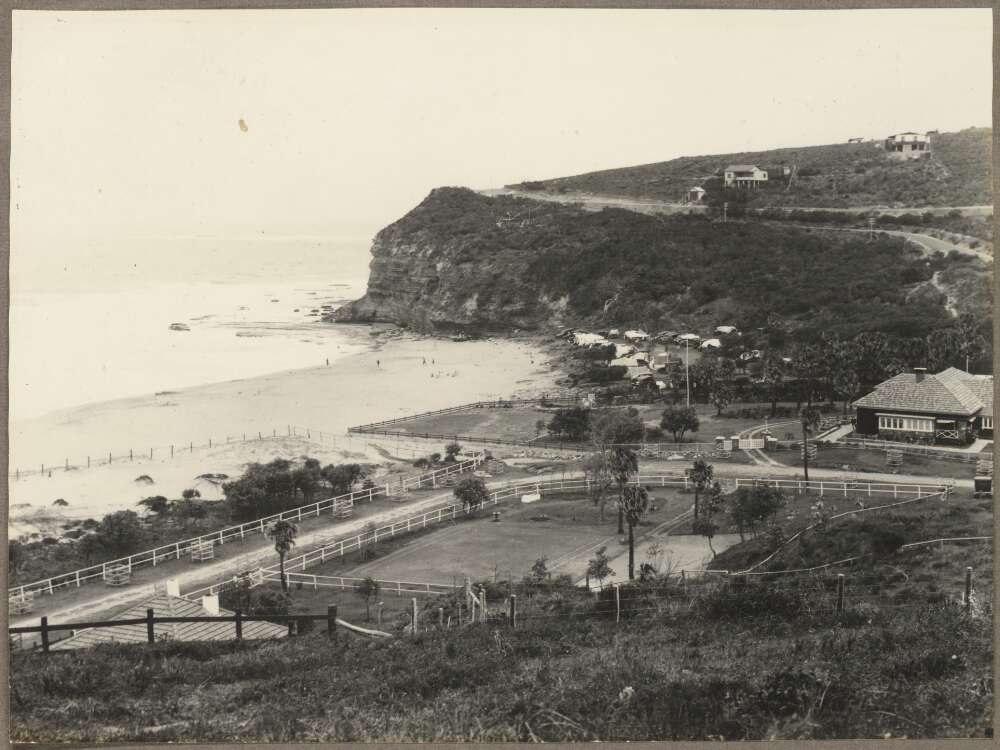 In May 1928 Hannah and Robert advertised an intent to purchase and reclaim 6 perches below the high water mark From early in the 1930’s the proerty was advertised for rent as a Holiday Rental or at the end of summer and even in October, 1932. It is described in these ads as having 3 bedrooms or two large bedrooms and a maid’s room, a living room, sleepout verandahs and shower room in later ads. At first beautiful furnishings, cutlery and linen are included. By October 1932 it is not and Hannah has the placement of a rental being attended to by others. 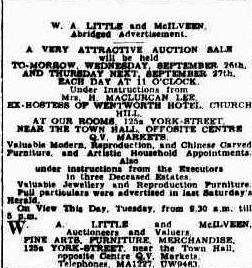 This change may be due to her passion for all fine and valuable things, and even selling Chinese, furniture 25.9.1934, or husband of almost a year by then, Mr Lee, may have wanted the premises rented out for other reasons; 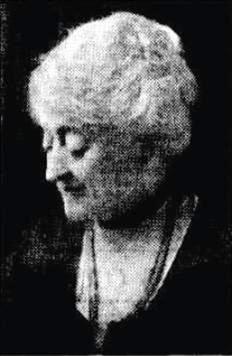 The death occurred on Sunday, at St. Vincent's private hospital, of Mrs. Hannah Maclurcan Lee, formerly gov-erning director of the Wentworth Hotel, Sydney. She was 73 years of age. Mrs. Maclurcan Lee, who was better known as Mrs. Maclurcan, went to Sydney in 1901, when she bought the Wentworth Hotel— with 30 rooms and an unpopular name, she once said. She herself did all the cooking for two years with only the help of two Chinese boys in the kitchen. The venture was an unusually large business undertaking for a woman in those days, and when, in 1912, the Went-worth Hotel was formed into a limit-ed liability company she became gov-erning director — a position she retain-ed for more than 20 years. During that time she bought land on each side of the hotel, and remodelled and rebuilt until she had a modern Hotel.

A daughter of Mr. A. Phillips, of Brisbane, who owned a number of hotels, Mrs. Maclurcan gained a thorough knowledge of the business at a very early age. Her father put her into the kitchen of his hotel at Townsville, and she worked through the dining-room to the office, until she knew how to organise and manage. When her chefs refused duty at the Wentworth Hotel some years ago, she locked the gates on them and took on new men. When she was only 15 years of age, her son, Mr. Charles Maclurcan said, she was manager, for her father of the Club Hotel in Too-woomba.

Mrs. Maclurcan's Cookery Book, published first in 1890, has achieved wide fame. She helped the Townsville printers to set the type, and when the establishment ran out of type she bought some more. The first edition sold out in a fortnight; the second edition was published in Sydney; and the third in London, at the time of the diamond jubilee of Queen Victoria, who accepted a copy. Until 1929 there was a new edition almost every year. Mrs. Maclurcan Lee was actively associated with the management of the Wentworth Hotel until within four years of her death. All her life charitable committees found in her a ready helper, and her advice was eagerly sought by organisers. During the war she worked for numerous comfort funds. Of late years Mrs. Maclurcan Lee had made her home, Bilgola House, Bilgola, her chief hobby. The remains were cremated at Rook-wood. Mrs. Maclurcan Lee is survived by her husband, Mr. Robert Lee, to whom she was married about six years ago— three daughters— Mrs. Ralph Moore, whose home is in England, Mrs. Spencer Watts, and Mrs. F. C. Postle— and a son, Mr. Charles Mac-lurcan, of Strathfleld, one of the pioneers of wireless in Australia. OBITUARY (1936, October 2). Daily Advertiser (Wagga Wagga, NSW : 1911 - 1954), p. 4. Retrieved from http://nla.gov.au/nla.news-article144615367

Here is just one of the references which confirm this.

Sunday, 27th November, 1921 – Sunday Times: Mrs. Maclurcan is pictured to-day.  She is so well known in Sydney's social and business circles that she scarcely needs an introduction. She started her remarkable business career with her father, and actually managed his hotel at Sandgate when she was 16. Mrs. Maclurcan has a remarkable gift for   organisation, as anyone who has been concerned in charity functions at the Wentworth Cafe will testify. The functions arranged under her direction give so little trouble to the executive members that they can enjoy the parties just as heartily as the patrons who have not helped in getting them up. Mrs. Maclurcan goes abroad periodically to glean new ideas for the running of the cafe. She is now directing the enlargement of the beautiful ballroom, and expects it to be in readiness for the Christmas and New Year celebrations. 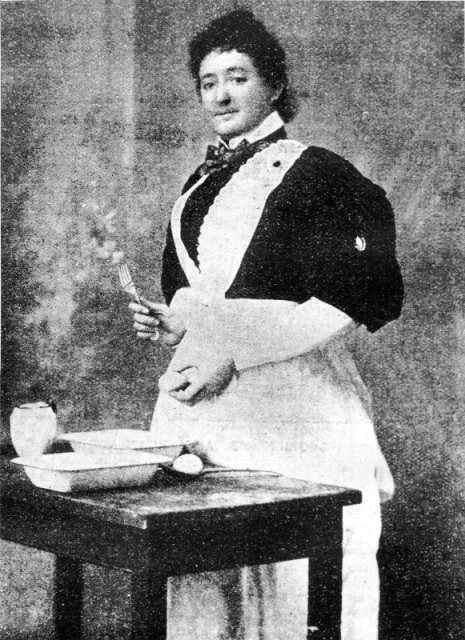 Her home was put up for sale - the sales description lists:

BILGOLA. BEAUTIFUL BILGOLA.
BILGOLA. BEAUTIFUL BILGOLA.
Between Newport and Palm Beach.
Under instructions from the Executors of the
Estate of the late Mrs. H. Maclurcan-Lee.
CHOICE LAND FOR SALE
AND TWO DISTINCTIVE RESIDENCES
ON THE BILGOLA BEACH ESTATE
ON THE BILGOLA BEACH ESTATE
THE LOVELIEST SPOT ON THE COAST.
WITHIN ONE HOUR'S DRIVE from the CITY.
Bilgola is favored with a glorious Beach in a most beautiful setting.
Blocks with clean sandy ocean beach frontage
UNSURPASSED FOR SEASIDE HOMES are now available.
SWIMMING POOL, south end of Beach, cut in rocks.
PERFECT ROAD APPROACH.
Environment and general atmosphere of this unique property are beyond compare.
The beauty of this Estate Is enhanced by DUE EASTERLY ASPECT.
AN INSPECTION WILL CONVINCE.
'Phone or Call Agents for plans and prices of land and full particulars of residences.
Cars leave City Office daily and Sunday. Sole Selling Agents:
RICHARD STANTON & SONS, LIMITED, J. T. STAPLETON & CO.. LIMITED.
Stanton House. 133 Pitt St., Sydney.
Or Inquire at LOCAL OFFICE. AVALON. Advertising (1937, January 17). Truth (Sydney, NSW : 1894 - 1954), p. 32. Retrieved from http://nla.gov.au/nla.news-article169600828

In 1954, Bilgola house was placed on the market again:

Hannah Maclurcan’s Bilgola estate passed to her son, Charles, and was eventually sold. However, the house that offered such comfort to W B Dalley, Oswald Watt, Hannah Maclurcan and others is, sadly, no longer with us. It was demolished in 1987, together with all the outbuildings, despite having been listed under Warringah Council’s draft provisions for the control of heritage buildings. The intention of the then owner was to erect townhouses on the site but community protest led to the rejection of this and subsequent plans. Today, five houses occupy the site and the present owners have been careful to preserve many of the heritage items – a grove of tall cabbage-tree palms, trees lining the avenue, the old entrance posts, dry stone walls bordering the creek, small bridge structures, lined garden beds, pedestals, wells, and even the flower urns on which the carved heads of Henry Parkes, John Robertson and William Dalley can still be discerned.

Pittwater Roads II - Where the Streets Have Your Name - Bilgola

We would like to acknowledge and thank Tony Dawson and the Manly, Warringah and Pittwater Historical Society for their generous assistance and allowing us to place extracts from the Peninsula Historian, Newsletter of the MWPHS as part of this peice. Bilgola. VOLUME 3  NO. 8 AUGUST 2010 and VOLUME 3  and NO. 9, SEPTEMBER 2010. George Champion OAM, and written by Tony Dawson & Anne Spencer of the Bilgola Preservation Society

Bilgola Cottage and House threads Collected and Collated by A J Guesdon, 2011.