The recent page on Moments in Time: Australian Postcards by Jim Davidson brought to mind cards collected when younger – bird cards, from boxes of tea, when tea still came in boxes, which could then be collated in a special album.
It’s very similar to what you see aimed at youngsters today by supermarkets and newsagents etc. except these were cartoon offshoots from movies made elsewhere – these were Australian birds.
Swap cards as a childhood occupation is not restricted to childhood. Football cards collected along with a stick of chewing, in the States, baseball cards, first printed in the late 1860’s, some fetching huge prices for rare versions by Collectors, as reprised in the movie Diminished Capacity with Alan Alda and Matthew Broderick in the lead roles, have been around for over 150 years.
One of the pricier baseball cards was the T206 Honus Wagner a dead-ball era baseball player who is widely considered to be one of the best players of all time. The card was designed and issued by the American Tobacco Company (ATC) from 1909 to 1911 as part of its T206 series. Wagner refused to allow production of his baseball card to continue, either because he did not want children to buy cigarette packs to get his card, or because he wanted more compensation from the ATC. The ATC ended production of the Wagner card and a total of only 50 to 200 cards were ever distributed to the public (exact number unknown), as compared to the "tens or hundreds of thousands" of T206 cards, over three years in sixteen brands of cigarettes, for any other player. In 1933, the card was first listed at a price value of US$50 in Jefferson Burdick's The American Card Catalog, making it the most expensive baseball card in the world at the time. 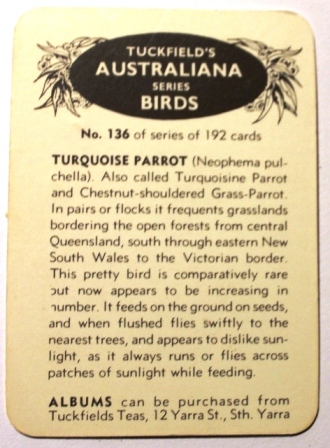 Investor Place lists the most expensive baseball cards as Eddie Plank, 1909 — $188,000, Shoeless Joe Jackson, 1910 — $199,750, Ty Cobb, 1911 — $273,000, Mickey Mantle, 1952 — $282,000 and Honus Wagner, 1909 — $2.8 million. So those who invested $50.00 in 1933 have seen a good return.
In Australia, for girls, and young boy future ornithologists there was Tuckfield’s Australiana Series which had runs of dogs, cats, fish and wildflowers. By far the most popular, and most numerous cards available, were those that comprised their Birds series. Although these won’t fetch the above prices they’re still popular and Collectors are still trying to find elusive ones to fill that vacant spot n their Tuckfield's Albums.
In Tuckfield's Birds and other cards: types, variants, chronology, exchange tokens, albums, and miscellany by Mark Calabretta and Cheryl Ridge (2013 – version 3.0) the authors state:
‘Tuckfields Birds cards were issued progressively in five “series” of 96 cards in packets of Tuckfields “Ty-nee Tips” and “Orange Pekoe” tea, beginning in 1959 in Victoria and Tasmania.
Later, when Tuckfields was taken over by Lyons Tetley, the cards were also issued in New South Wales (and Queensland?) in “Kinkara” tea and “Copper Kettle” instant coffee. Tetley Australia, today owned by Tata, the Indian multinational, finally ceased issuing the cards in 2008 after almost half-a-century, with many reissues and reprintings. The series is one of the largest trade card sets ever issued, including the large German cigarette card sets of the 1930s, and probably had the longest lifetime.’
The cards had a sometimes inaccurate and badly drawn bird on one side while the other side had information about the bird, which number in which series it was and at the base:
‘ALBUMS can be purchased from Tuckfields Teas, 12 Yarra St., Sth. Yarra.' 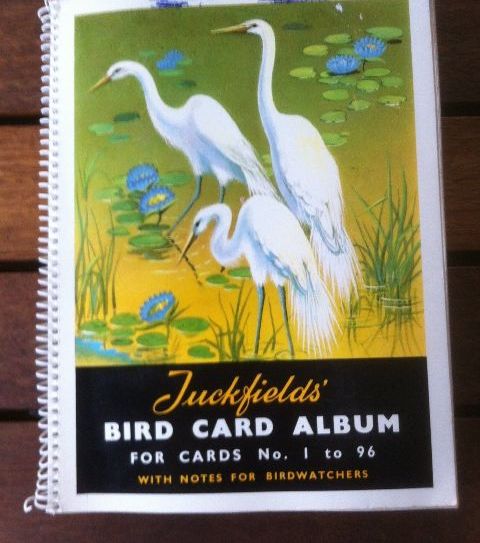 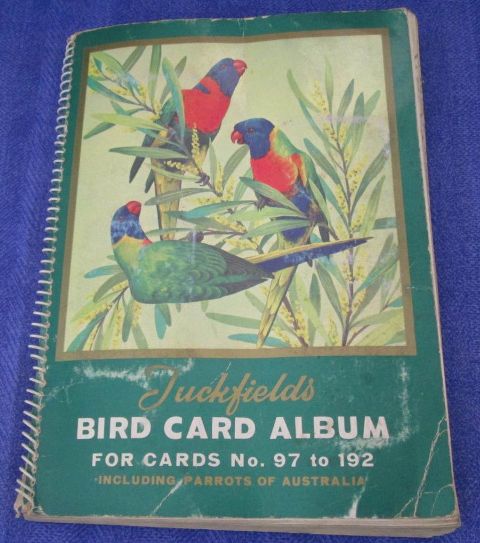 So who is ‘Tuckfield’?
Fredrick Stevens Tuckfield was born in 1898 in Sale, Victoria. His grandfather, Francis Tuckfield, had emigrated from Cornwall in 1838 to establish a mission for aborigines near Birregurra, about 50 km west of Geelong, and became a prominent member of the early Methodist Church in Australia.
In 1936 when Fred Tuckfield set up as an independent merchant selling tea, coffee, and nuts from a store at 382 Flinders St, Melbourne. An early advertisement relates that he had been the manager for 14 years of the Tea and Coffee Departments of Rolfe & Co. Ltd..
Rolfe & Co. was a wholesale grocer and manufacturer of food products, including wine, spirits, coffee, and tea (Rolfe’s tea, Teaspoon tea). The company was listed on the Melbourne stock market in 1920 with a capital of £300, 00025, but by the early 1930s was in financial difficulty, mainly due to increased competition from chain stores and syndicates who could buy well and sell at the prices charged by the wholesale houses. Rolfe & Co. also ran a line of credit to country and suburban grocers who were weathering the Depression. Rolfe’s began to record heavy losses, the tea section being one of their few profitable areas, and a receiver was appointed in October 1937, the company going into voluntary liquidation the following month.
In November 1939, the well-known “Ty-nee Tips” brand name made its first appearance in an advertisement:
TEA COSTS CUT
RELIEF for HOUSEWIVES
Rising costs due to the world's shortage of Tea have added considerably to housewives' problems.
A way in which the cost of Tea can be cut however, is to use a blend made by Melbourne's leading Tea Expert—F. S. Tuckfield. The blend is known as Tuckfield's Ty-nee Tips Tea, and is available at Tuckfield's new Tea, Coffee, and Nut Store, 382 Flinders St., Melbourne, two doors from Market St.
Ty-nee Tips Tea sells at 2/8 per pound, but as 2lb will go as far as 3lb of other Teas, the cost is the equivalent of only 1/9¼ per pound. Send 9d. in stamps for a quarter-pound packet to be posted. TUCKFIELD'S TEA. 382 FLINDERS ST., MELB. M5441 Advertising (1939, November 18). The Argus (Melbourne, Vic. : 1848 - 1957), , p. 7 (The Argus Week-end Magazine). Retrieved from http://nla.gov.au/nla.news-article11288917
During the war years Mr. Tuckfield concentrated on building the business and, as evidenced by advertisements in the The Argus of the time, he tried all angles to sell his tea, with Ty-nee Tips usually featuring prominently. 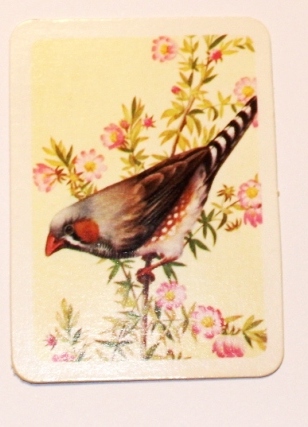 Waste not want not
To quote Dr. Johnson, "I am a hardened and shameless tea drinker who — with tea — amuses the evening, solaces the midnight and welcomes the morning." Tuckfield's teas alone give me the perfection I seek . . . the economical Ty-nee tips which brews 300 cups to the pound, and the large leaf Orange Pekoe which is the choice of connoisseurs the world over. Everywhere in Melbourne you can buy the best tea . . . TUCKFIELD'S, of course! June Report of the Shopping Spy (1954, June 10). The Argus(Melbourne, Vic. : 1848 - 1957), p. 8. Retrieved from http://nla.gov.au/nla.news-article23418681
In Tuckfields Birds and other cards: types, variants, chronology, exchange tokens, albums, and miscellany, Deidre Hunt relates the beginning of the Tuckfields card series:
'My father, David Underwood, was director of Cambridge Mfg. Co., a subsidiary of McLarens Fine Art Printers. This company [Cambridge] printed the packets for Tuckfield’s Tea, and Mr. Fred Tuckfield asked my father if he had any ideas on promoting their product.
My father had long been a collector of cigarette cards and others, and suggested that a similar sized card would be ideal for a tea packet. Mr. Tuckfield liked the idea of an Australian theme, so between them they decided on Birds of Australia as birds are so varied and attractive and likely to be popular with adults and children.'
Tuckfield’s Teas Pty. Ltd. continued to prosper through the 1960s but revolved on Fred Tuckfield’s expertise in buying, tasting, and blending teas and on his business acumen. After he passed away on 19 September 1973 there was no one to take his place and his business enterprise was sold.
References and Extras
Definitive Resource is:
Tuckfields Birds and other cards: types, variants, chronology, exchange tokens, albums, and miscellany by Mark Calabretta and Cheryl Ridge Edition: 3.0, 2013/01/13 (111 pages - PDF)
Retrieved from: http://members.iinet.net.au/~mcalabre@netspace.net.au/TuckfieldsCards_3.0.pdf
The 10 Most Valuable Baseball Cards (2012) by Investor Place - Retrieved from: http://investorplace.com/2012/12/the-10-most-valuable-baseball-cards
T206 Honus Wagner. (2016, July 20). In Wikipedia, The Free Encyclopedia. Retrieved from https://en.wikipedia.org/w/index.php?title=T206_Honus_Wagner&oldid=730653683 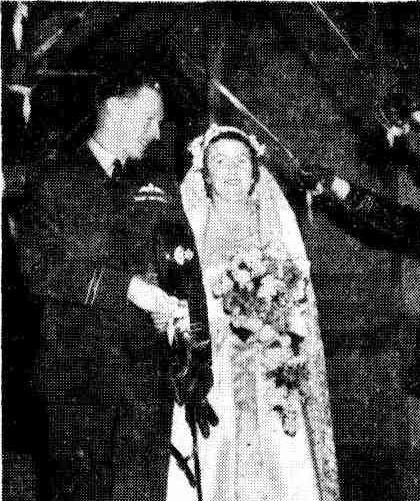 Married on Saturday -
R.A.A.F. Guard of Honor
A guard of honor was formed by R.A.A.F. officers at the Presbyterian church, Toorak, after the marriage of Miss Margot Elizabeth (Jill) Tuckfield and Flight-' Lieutenant Ian Russell Olorenshaw (R.A.A.F.), at which Rev. Alan Watson officiated.
The bride, who is the elder daughter of Mr. and Mrs. F. S. Tuckfield, Caulfield, wore an heirloom veil of Brussels lace, lent by Mrs. M. Rossell, of Renmark, South Australia, over her classical gown of ivory, satin, which was fashioned with a train. She carried a small trail bouquet- of almond blossom and gardenias, and small sprays of almond blossom were fastened at each side, of her head. Her only sister, Miss Jennifer Tuckfield, attended the bride.  She wore a white figured organdie frock, and, on her head, a circlet of azaleas and daphne matching her small bouquet. The bridegroom, who is the second son of Mr., and Mrs. F. J. Olorenshaw, of Renmark, South Australia, had Squadron Leader Robin Gray (R.AA.F.) as best man: Following the ceremony a small reception was held: at the home of the bride's parents.
Flight-Lieut. Olorenshaw, of South Australia, and his bride, formerly Miss Jill Tuckfield, leave the Presbyterian church, Toorak, beneath an archway of sxoords held by the bridegroom's brother officers, after their marriage on Saturday. Married on Saturday (1949, July 11). The Age (Melbourne, Vic. : 1854 - 1954), p. 5. Retrieved fromhttp://nla.gov.au/nla.news-article189466036 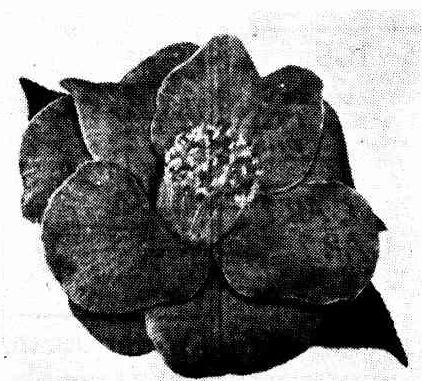 BEST BLOOM in the Royal Horticultural Society's camellia show was this fine specimen of The Czar, staged by Mr. F. S. Tuckfield, of Caulfield.
With its large crimson blooms — in which the golden stamens are a prominent , feature — this variety has become a universal favorite. No title (1952, August 22). The Age(Melbourne, Vic. : 1854 - 1954), p. 7. Retrieved from http://nla.gov.au/nla.news-article206222316 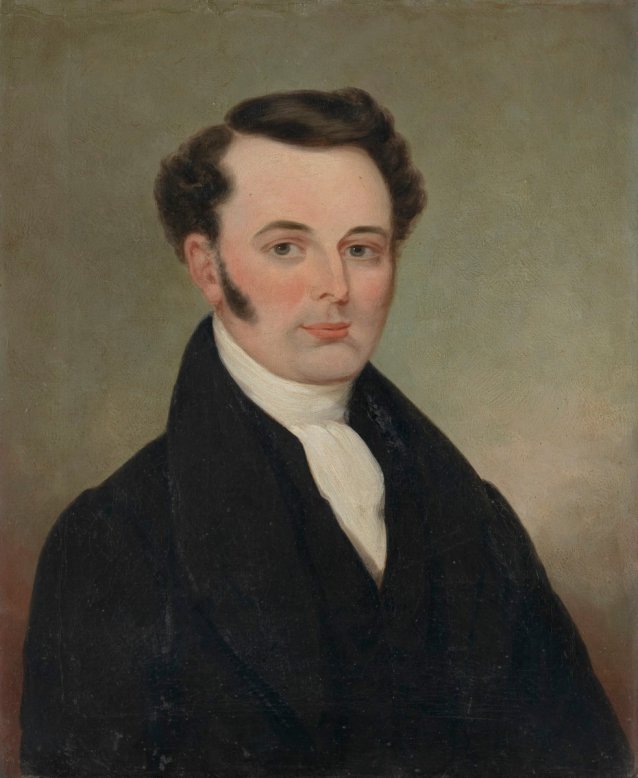 Tuckfields Bird Cards: Swap or Keep by A J Guesdon, 2016.