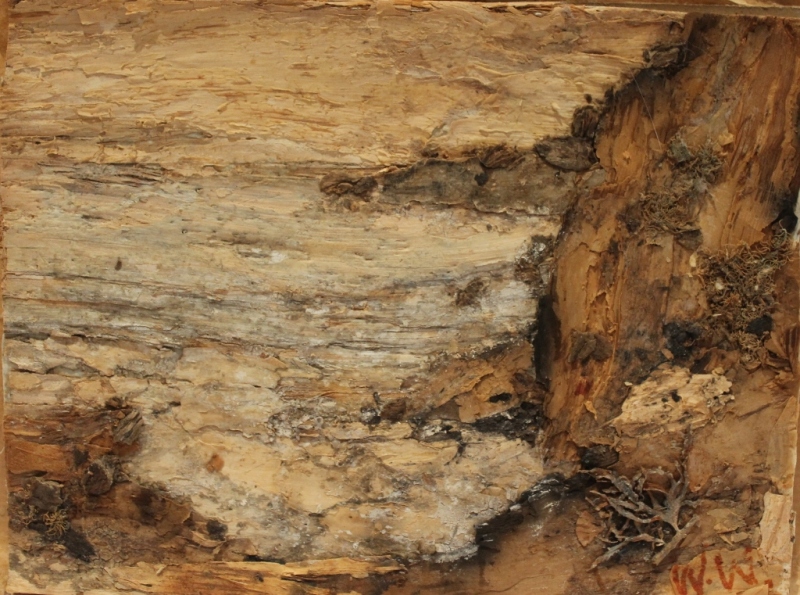 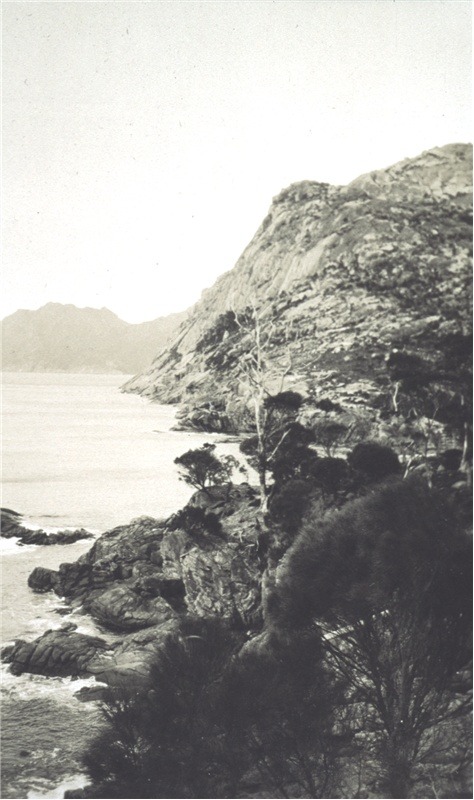 A form of early three dimensional art in Australia was using the Melaleuca or paperbark tree to create layers of bark paintings or art that in many cases did not change the natural colour of the bark but used these varying shades and textures to create landscapes, flora pictures or legendry indigenous figures. The one shown here, bought over 40 years ago and signed by the creator, Weeta Wilkinson of Dee Why, 1965, is of Sleepy Bay in Tasmania. Sleepy Bay is not too sleepy when storms race in. It is part of the Freycinet National Park.

Bark Picture Art must not be confused with ‘aboriginal bark art’, which is painting, with pigments, on large pieces of solid bark. Some sources state that over 120 years ago, the early settlers of Australia first created rough, but cleverly constructed Bark Pictures, from the natural ingredients in the bush that surrounded them. These pictures helped brighten and decorate their basic, drab huts. Yesterday and even today, the art of Bark Picture making has developed into a more sophisticated and creative form of art.

Bark Art was beginning to become popular again in the early 1950’s, a pursuit liked by many by the mid-1960’s  and still flourishing a few decades later with many ‘how to’ and display books being published late into the 1980’s (Nancy Millard and Margaret Grieve). It was a great way to develop latent artistic skills for retirees or even earn a bit of money for those who wished to but may not have access to working for others.

Craft kits are also still available although purists maintain you must do all the field work yourself; gather and treat the bark, mosses and seaweeds and work out what it is saying and how you may translate that into a picture. No one may plunder our National Parks for flora of any kind anymore, so having access to a paperbark tree will be necessary and finding out from your local Council what licences you may need to gather other materials will be necessary.

Instances of Bark Art: some of these have great photographs; just click on links to view.

Man Designs N.W. Scenes In Paper-Bark
A retired civil servant who noticed about two years ago that a piece of paper-bark looked like a landscape, has turned this idea into a profitable hobby as he has sent examples of his work as far abroad as America and the British Isles. He is Mr. M. J. H. de Grancy, of Mahogany Creek, who has made several hundred pictures of typical North-West scenes from paper-bark and seaweed which he has gathered from Broome to Albany. Mr. de Grancy makes use of the differing textures of the bark from the grey coarse weather-beaten outside to the shell pink layers underneath. He tears the bark and allows it to form the picture it suggests to him. He composes the scene in three layers--the horizon, the centre-ground and the foreground and when it is necessary to highlight a contrast he gives the bark a light brush with a coloured native clay red ochre from York, copper oxide or white pipe clay from Mahogany Creek. For trees he uses a special seaweed which is treated and pressed. Each picture is called by a native name given with an
English translation. Man Designs N.W. Scenes In Paper-Bark. (1954, July 29). The West Australian (Perth, WA : 1879 - 1954), p. 31. Retrieved from http://nla.gov.au/nla.news-article52957759

Pictures from bark - a new art ?
Mrs. Dorothy Edmunds, of Hibbard, near Port Macquarie, N.S.W., believes she has devised a new art form with her bark pictures.
UNLIKE the aboriginal paintings on strips of bark, Mrs. Edmunds' creations are made from the bark itself glued to stiff card-board to form pictures. In the garage at her weatherboard house she has bench, easel, scissors, clear varnish, and gum. On the floor beside her are the strips of Australian tea-tree bark from which she creates scenes of Australian plants, animals, and aborigines.
BARK - COLLECTING
Her pictures bear titles like "Brolga's Shadow Dance," "Corroboree," "Kangaroo Hunt," and "Kookaburras."
Mrs. Edmunds and her oyster - farmer husband, Selby, wear gumboots and carry axes on their trips into the bush and swamps for tea-tree bark. Mrs. Edmunds has made 42 bark pictures since her first experiments 14 months ago. She has sold several at prices ranging from four to 25 guineas.
"I start with a sheet of stiff cardboard," she said, "and roughly sketch with pencil the picture in mind. I improvise as I go along, according to the shape of the pieces of bark. I peel off the large strips. Some of the strips look like trees, rocks, and water-falls as I tear them off, but others have to be cut to shape with scissors. I stick them on with strong gum and when all the pieces arc in place I varnish over the whole thing with clear varnish. As far as possible I use the natural bark colourings, but occasionally I have to use artificial colouring. For instance, I use liquid lip-stick to represent the flames of a fire, and paint or chalk for blue lakes or waterfalls. I use barks which have been through bushfire, so that I am sure they are free from fungus and termites. Sometimes I use a piece of burned grass or grass stalk to make things like aboriginal spears."
She likes working with bark because her pictures are three-dimensional.
"They have a depth which I know I couldn't capture with paint or oils," she said.
Her completed pictures are backed with three-ply and mounted in frames. She gets her ideas from illustrated books and magazines on Australia or from aboriginal folklore. A local architect has suggested the bark pictures would make murals. - Winifred Munday. Pictures from bark- a new art?. (1963, August 7). The Australian Women's Weekly (1933 - 1982), p. 46. Retrieved from http://nla.gov.au/nla.news-article47493147

There’s beauty in bark
When Earl McNeil retired from his job as a news photographer 18years ago, he and his wife bought an old colonial house at Arakoon on the north coast of N.S.W. The house, just near the historical Trial Bay Prison, has been restored (Mr. McNeil put in about 2000 feet of cedar) and is now a show place in the district. In the past few years he has developed another interest- "painting" in bark and foliage. (EARL McNEIL with one of his bark paintings of an inland pass.)
ON this page are some of Mr. McNeil's pictures - mostly made with materials found in the bushland around his home. The first step in creating a bark painting is to collect strips of tea tree or paper bark treebark, and these should be torn, rather than cut, away from the tree. Mosses, fungus, dried foliage, and seaweed can also be used. All material is thoroughly dried between masses of newsprint. Marine growths should be cleaned of sand and salt before a first drying, then washed again in lukewarm water and a little glycerine before a final drying. The background is a sheet of compressed wood or cane. Mr. McNeil first draws a design for the picture on the board, but some artists prefer to work directly in bark. Mr. McNeil never uses paint, but does sometimes draw aboriginal figures with charcoal on a bark background. The pieces of dried bark are glued to the board, then pressed down with weights. The finished picture should be protected with a glassed frame. ABOVE: Ayers Rock, "painted" in brilliant fungus, and, BELOW, aboriginal faces drawn in charcoal on bark. One important point is that the material used must be quite dry. ABOVE: "Arakoon," Mr. and Mrs. McNeil's restored colonial house, near Trial Bay Prison at South West Rocks, coastal N.S.W. ABOVE: Mr. McNeil works on an Ayers Rock picture, using bark and fungus collected from the bushland near his home. There's beauty in bark. (1966, November 9). The Australian Women's Weekly (1933 - 1982), p. 7. Retrieved from http://nla.gov.au/nla.news-article51972903 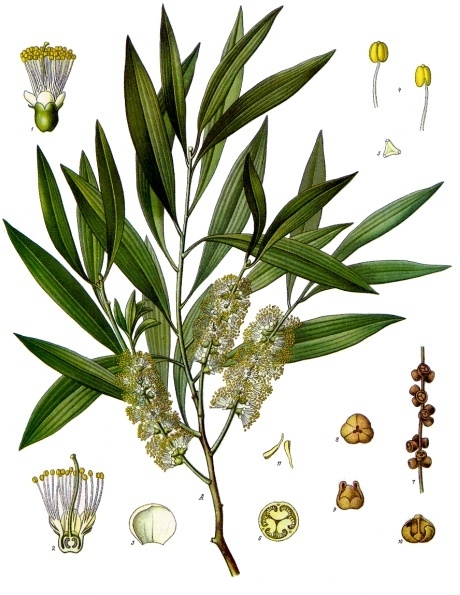 Melaleuca, the paperbark used in Weeta’s picture, is a genus of plants in the myrtle family Myrtaceae and well known for its natural soothing and cleansing properties. There are well over 200 recognised species, most of which are endemic to Australia. Australian Aborigines have used the leaves for many medicinal purposes, including chewing the young leaves to alleviate headache and for other ailments. The steam distilled leaf oil of thecineole chemotype is also used externally for coughs, colds, neuralgia, andrheumatism. A nerolidol and linalool chemotype is also cultivated and distilled on a small scale for use in perfumery. The paper-like bark is used traditionally for making coolamons, shelter, wrapping baked food and lining ground ovens. The nectar is extracted traditionally by washing incoolamons of water which is subsequently consumed as a beverage. The scented flower also produces a light to dark amber honey depending on the district

Melaleuca is closely related to the genus Callistemon; the main difference between the two is that the stamens are generally free in Callistemon but grouped into bundles in Melaleuca. Callistemon was recently placed into Melaleuca. In the wild, Melaleuca plants are generally found in open forest, woodland or shrubland, particularly along watercourses and the edges of swamps. 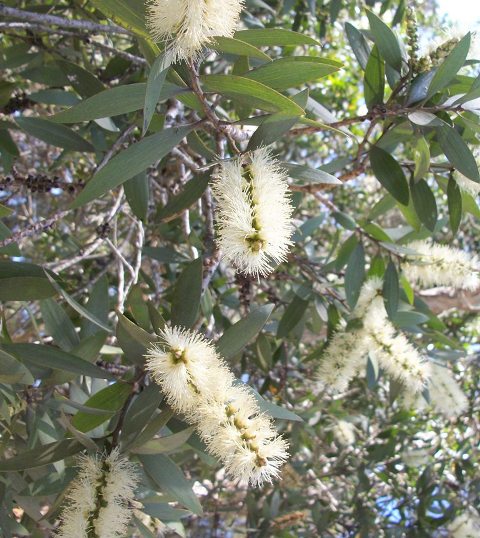 The best-accepted common name for Melaleuca is simply melaleuca; however most of the larger species are also known as tea tree, and the smaller types ashoney myrtles, while those species in which the bark is shed in flat, flexible sheets are referred to as paperbarks. The Tea tree is presumably named for the brown colouration of many water courses caused by leaves shed from trees of this and similar species (for a famous example see Brown Lake (Stradbroke Island)). The name "tea tree" is also used for a related genus, Leptospermum, also in Myrtaceae. One well-known melaleuca, M. alternifolia, is notable for its essential oil which is both anti-fungal and antibiotic, while safely usable for topical applications. This is produced on a commercial scale and marketed as Tea Tree Oil.
Melaleuca. (2013, March 6). In Wikipedia, The Free Encyclopedia. Retrieved from http://en.wikipedia.org/w/index.php?title=Melaleuca&oldid=542441743

Current for Collectors of Bark Art or those who would like to try it out:

ArT in bark: http://www.swnc.org.au/artinbark/big-picture.htm
These Pictures are made by gluing the fibers of the bark from a Melaleuca tree into suitable patterns.
On a suitable backing board a coating of flaked and fiberous strands of bark of the Melaleuca tree is laid out and glued in place, this art form is very time consuming as each strand is glued into place separately there may be 20 to 30 layers built up in places to give a third dimensional appearance. This bark is available in quite a large range of natures colours, from the soft parchment which is the normal through pink, gray, green and black from the effect of fires.

On EBAY this week: Make Your Own Australian Natural Bark Pictures.
Create pictures made solely from natural, Australian Paper Bark. Everything you need is provided inside this kit.

This kit makes an ideal gift for creative individuals from 8 to 80 years of age. It was designed to encourage beginners to create their own original traditional Bark Pictures, by using only native Australian tree barks. With more than one hundred species of Melaleuca, which is indigenous to Australia, the art of Bark Picture making is unique to Australia, creating a ‘living’ piece of this magnificent country. The kit contains bark of many natural colours from greys, whites, browns, through to red, golden, and even lots of black after bush fires. The range of colours and textures supplied by Mother Nature are beautiful. Making bark pictures is relaxing and they are great to decorate your own home or perfect as a gift, completed or in kit form. Unique and totally Australian, this kit is great value at just $24.per kit (which is $8 per picture). Order a kit for yourself today or contact us for a special price on bulk orders. Please note that postage/handling is an additional cost. At: http://www.gumtree.com.au/s-ad/nowra/art/new-bark-art-picture-craft-kit-makes-3-pictures-8-each/1005555790 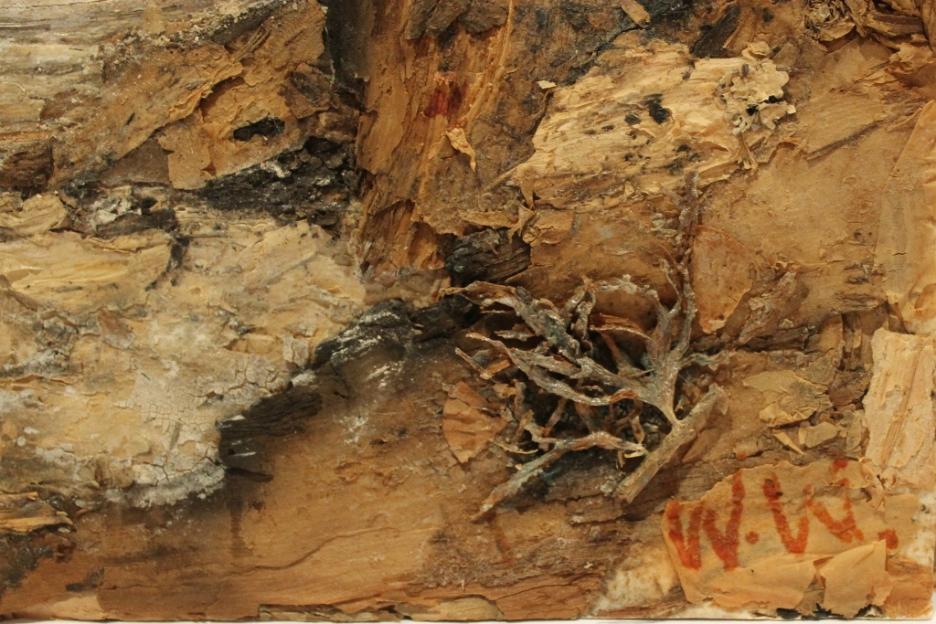 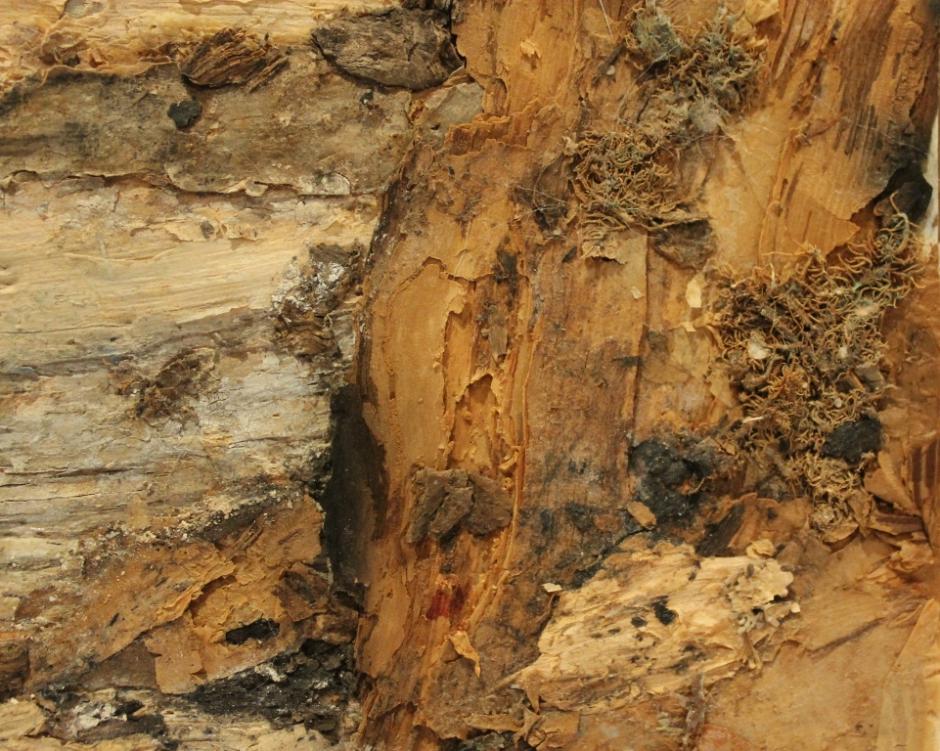