Above: male Chinese Guardian Lion with flowers. Below; Back of this one 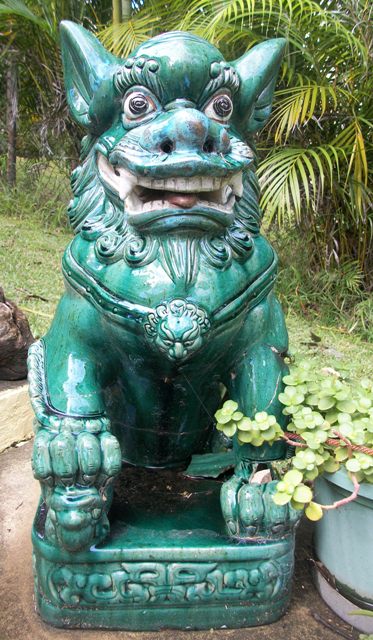 Above: Green Guardian Lion (facing east) one of pair. The colour green guards the East in Chinese lore.

In the gardens of many there are what is known as Chinese guardian lions, Shishi (Chinese: pinyin: shíshī; literally "stone lion") or Imperial guardian lion, and often called "Foo Dogs" in the West. These are a common representation of the lion in pre-modern China. They have traditionally stood in front of Chinese Imperial palaces, Imperial tombs, government offices, temples, and the homes of government officials and the wealthy, from the Han Dynasty (206 BC-AD 220), and were believed to have powerful mythic protective benefits. This tradition has been maintained in our current culture with pairs of guardian lions being used as common decorative and symbolic elements at the entrances to homes, restaurants, hotels and other structures.

With one sitting on each side of the entrance, the lions are created in pairs. The pair is a manifestation of yin and yang, the female representing yin and the male yang. The male lion has its right front paw on an embroidered ball called a "xiù qiú", which is sometimes carved with a geometric pattern known in the West as the "Flower of life" The female is essentially identical, but has a cub under the closer (left) paw to the male, representing the cycle of life. Symbolically, the female fu lion protects those dwelling inside, while the male guards the structure. Sometimes the female has her mouth closed, and the male open. This symbolizes the enunciation of the sacred word "om".  The Buddhist version of the Lion was originally introduced to Han China as the protector of dharma and these lions have been found in religious art as early as 208 BC. (1.) From Wikipedia

There are various styles of guardian lions reflecting influences from different time periods, imperial dynasties, and regions of China. These styles vary in their artistic detail and adornment as well as in the depiction of the lions from fierce to serene. Carved traditionally from decorative stones (marble and granite) or cast in bronze or iron, private use of guardian lions was traditionally reserved for wealthy or elite families. In ancient China a traditional symbol of a family's wealth or social status was the placement of guardian lions in front of the family home and the material they were constructed from and decorated by indicated the level of wealth.

Nowadays those who appreciate the ornate art and beauty of these pieces may purchase less expensive versions cast from concrete and glazed or resin versions. These range from around $600.00 a pair for larger versions and up to thousands of dollars depending on the age and material they have been constructed from. Smaller pairs, made from silver or jade, can also be expensive. Those that are ‘carved’ can be more expensive then those from castings. Claims as to being ‘antique’ should be verified.

Garden Karma, an Adelaide based specialist in these statues, imports and sells hand carved in Indonesia Guardian Lion pairs from $3000.00 to $7500.00. These are sculpted from Java lava stone.

Those that can be identified by experts as belonging to a dynasty and authenticated are going to fetch the most for those who find them or have kept them as investment pieces. Materials they have been made, or carved from, can be an indication of cost to collectors. A pair of Chinese Carved Hardwood Guardian Lions, circa 19th c., from what was possibly zitan wood, finely carved, with glass eyes and ivory teeth, on tall carved stands, sold in May 2012 with starting bids of $1000.00-$3000.00.

Zitan wood is a rare tropical wood of the rosewood family. In ancient China it was said that the dark purple color of zitan resembled the color reserved for the use of Qing dynasty. As a result, only the imperial household was allowed to use zitan in China from the 17th to the 19th century. Zitan (Pterocarpus) is a type of Leguminosae, a member of the rosewood family. The wood originates from the tropical forests of southern China, Indochina and islands in the Indian Ocean. Zitan is an evergreen tree, and grows slowly, reaching 30 feet in height and 10 inches in diameter after 300 years.

“The demand for Chinese antiquities has exploded, helping propel Hong Kong to third spot in the global auction market behind London and New York as collectors slap down eye-popping sums for a piece of the country's history. Helping drive the boom is a growing class of super-rich Chinese looking for opportunities to exploit their net worth while also "reclaiming" parts of Chinese history from Western collectors. Auction houses Sotheby's and Christie's together raised over $460 million from sales of Chinese antiquities and art works in 2011. [Source: AFP, February 2012]

According to feng shui, correct placement of the lions is important to ensure their beneficial effect. When looking out of a building through the entrance to be guarded, looking in the same direction as the lions, the male is placed on the left and the female on the right. Thus when looking at the entrance from outside the building, facing the lions, the male lion with the ball is on the right, and the female with the cub is on the left.

Asiatic lions, which were once quite common throughout their historic range of Southwest and Central Asia, are believed to be those that have been used as models for these guardian lions in Chinese culture. With increased trade during the Han dynasty and cultural exchanges through the Silk road, lions were introduced into China from the ancient states of Central Asia by peoples of Sogdiana, Samarkand, and the Yuezhi (月氏) in the form of pelts and live tribute, along with stories about them from Buddhist priests and travellers of the time. This exchange can be seen in that the Chinese word for lion is "Shi" (師, later 獅/狮), which shares the same etymological roots as "Shiar" (شیر), the Persian language name for the animal.