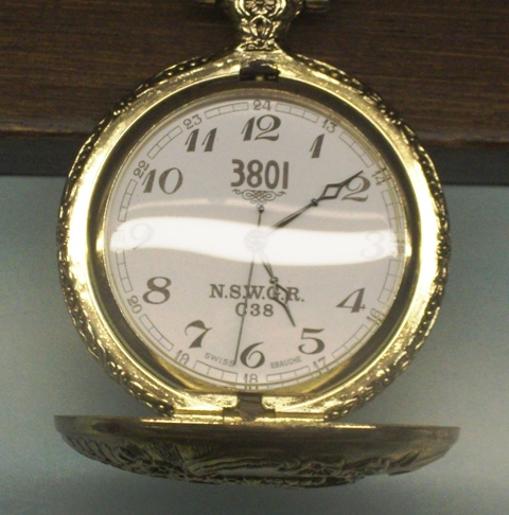 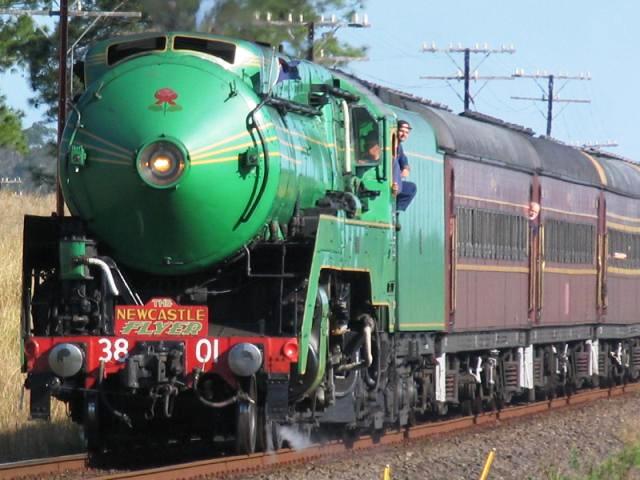 The watch displayed here, part of Trevor’s museum, is from a 3801, Australia's best known and most widely travelled steam locomotive. These once to hauled express trains such as the Newcastle Flyer and Melbourne Limited for the New South Wales Government Railways (NSWGR). 3801 was the only steam locomotive to visit every mainland state and territory in Australia. Drawn up in 1938, and finally entering service in January of 1943 (WWII priorities for steel), and built by Clyde Engineering,  the 3801 were the first of 30 38 class locomotives to haul express trains, their distinguished 'streamlined design' set them apart from the 25 locomotives in the class built by the NSWGR which were unstreamlined.

The 38 class became known then as the "Grey Nurse" due to its grey colour scheme - a wartime economy. When the 3802 began working in April, the engines were allotted to working the Melbourne and Melbourne Limited expresses between Sydney and Goulburn. In early 1947 the 3801 was overhauled and painted in what was to become its standard colour scheme of green with yellow lining. A Waratah emblem was added to the top of the nose cone in later years. In 1955 3801 was overhauled again, being painted black with red lining as a cost-cutting measure. It was around this time that diesel locomotives started appearing on the rails of NSW. These would take the "glamour workings" away from the 38 class, who would be confined to all-stations passenger and even goods trains.

In December 1956 the 3801 was the first in its class to reach 1,000,000 miles (1,600,000 km) of service. In 1960, the 38 class were transferred from Eveleigh to Broadmeadow sheds to reflect their decreased importance and in 1962, 3801 was slated for withdrawal. A "final run" was organised in September 1962, however 3801 continued working into December. Problems with biolers saw these lovcomotives on and off the rails until the end of April 1974, when all steam trains were barred from NSW rails, however during June and July of that year 3801 was allowed back to be used as the star of the award-winning film A Steam Train Passes.

NSW Rail Heritage is currently restoring and overhauling a 3801 at Chullora and seeking volunteers for this project.

Some Material in this Article extracted from: