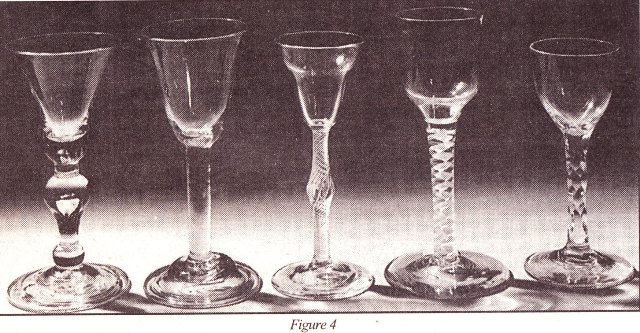 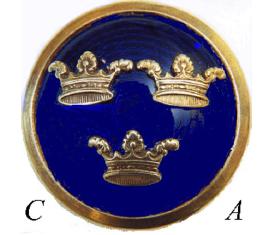 The habit of drinking spirits was introduced to the English by their troops serving in the Low Countries. Brandy was drunk neat or used as a base too mixed drinks such as punch. Cordials, a sort of 18th-century cocktail, were made from a base of home distilled wines, mixed with fruit juices and wine. Cordial glasses were made with small bowls of various shapes until about the mid-1800s when the funnel shaped bowl was adopted. There are two types of cordial glasses: The short cordial with short stem and small capacity and the tall cordial, which has a larger capacity and became popular after the repeal of the Gin Act in 1741 when the same glass was used for gin. [Figure 5]
Gin drinking had become a great social problem during the century. The price of ale and beer increased owing to the imposition of duties, at the same time as government statutes gave direct encouragement to the distilling industry. As a result, the average man changed from drinking malt liquor to gin. Consumption rose from two million gallons in 1714 to 11 million gallons in 1742. After 1751, the legislation changed and there was a reversion to ale and beer.
The drinking habits of the nation were largely determined by economic and political pressures - a preference for port over French wine and the popularity of gin were the direct result of legislation L and the imposition of duties. By the turn of the 18th century French wines were becoming unavailable due to onerous duties and by the Methuen Treaty of 1703 Portuguese wine could be imported at one third of the duty of French wine. White wines from Spain and the Canaries and Rhenish wines were also imported. But whatever restrictions were imposed on particular beverages at particular times by the government, drinking continued. There was always something else to fill the gap.
Lest it be thought that the excessive drinking of the period was carried out in squalid circumstances this was not always the case. Sometimes (drinking was done with great style as can be seen in the following account of a grand function given at Alicante by Admiral Edward Russell, Commander of the Mediterranean fleet. It also reveals the popularity of punch by naval personnel: "The tables were laid under the shade of orange trees in four garden walks meeting at a common centre, where there stood a handsome fountain. This fountain was converted for the occasion into a gigantic punch bowl. Four hogsheads of brandy, one pipe of Malaga wine, twenty gallons of lime juice, twenty five hundred lemons, thirteen hundredweight of fine white sugar, five pounds weight of grated nutmeg, 300 toasted biscuits and eight hogsheads of water, formed the ingredients of the monster potation. An elegant canopy placed over the potent liquor prevented waste by evaporation or dilution by rain. To crown this titanic effort, a small boy was placed in a boat expressly built for the purpose, to row round the fountain and assist in ladling the punch into cups of the six thousand persons who were invited to partake of it'.
Whilst the nation drank, glassmaking reached a peak of craftsmanship during the Georgian period and fine glasses as various as the concoctions consumed from them were produced, many of which are available to the collector. Glass was sold by weight and was expensive. Consequently, wine glasses were not used exclusively for drinking wine. Specific glasses for specific drinks came later during the Victorian period. Georgian wine glasses can be quite lovely, the glassmakers concentrating their skills on the stems. Five distinct stems appeared successively throughout the century: baluster stems, plain stems, airtwist stems, colour twist stems and facet stems [Figure 4]. Examples of all of these can be bought today. Champagne in the early 1800s was drunk from tazza type glasses, but there were also flutes often appropriately engraved with vine leaves and bunches of grapes.
Drinking customs of the age required certain glasses for specific occasions. Firing glasses were made for registering approval of a toast by hammering the foot of the glass on the table. The noise produced was like musket fire. A firing glass has a solid foot with a thick stem and small strong bowl. Deceptive glasses were also manufactured with bowls of exceptionally thick glass, which reduced the volume of liquor therein contained. This enabled the toastmaster to perform his job more effectively. Other glasses were not made to last. These were toasting glasses made for drinking a single toast. They had a trumpet bowl and a tall extremely thin stem. After the toast the stem was snapped to prevent it being used for another purpose. For obvious reasons not too many are available today. Other oddities were the 'boot' glasses, made in the shape of a boot to ridicule the aforementioned unpopular Earl of Bute, and 'stirrup cups' which had no feet as the contents were drained by someone still seated in the saddle.
Although collecting Georgian glass can be expensive, if you enjoy a drink or two, drinking from old glass may even enhance the experience and of course the glasses do look lovely on the table for both informal and formal dining. Matching is not necessary - the Georgians didn't - as a mixture of sizes and styles adds interest to the table and is often a good topic for conversation ■