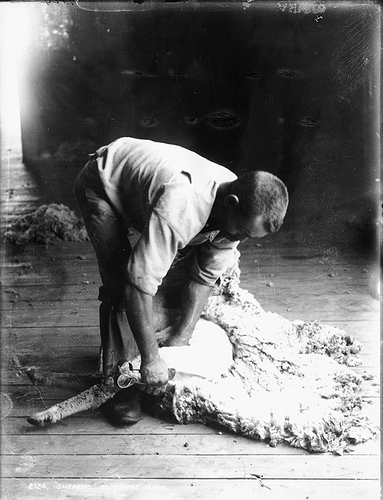 Above; 'Shearing around the flank'

The main seasons for shearing in Australia are Autumn and Spring. Sheep shearing, shearing or clipping is the process by which the woollen fleece of a sheep is cut off. The person who removes the sheep's wool is called a shearer. Typically each adult sheep is shorn once each year (a sheep may be said to have been "shorn" or "sheared", depending upon dialect). The annual shearing most often occurs in a shearing shed, a facility especially designed to process often hundreds and sometimes more than 3,000 sheep per day.

Blade shears were the original method for cutting off the fleece.  Blade shears consist of two blades arranged similarly to scissors except that the hinge is at the end farthest from the point (not in the middle). The cutting edges pass each other as the shearer squeezes them together and shear the wool close to the animal's skin. Blade shears are still used today but in a more limited way. Blade shears leave some wool on a sheep and this is more suitable for cold climates where the sheep needs some protection from the elements. For those areas where no powered-machinery is available blade shears are the only option. Blades are more commonly used to shear stud rams.

Shearing Records:  On 10 October 1892, Jackie Howe set a record of 321 sheep shorn in 7 hours and 40 minutes, using blade shears. He had previously set a weekly aggregate record of 1,437 sheep over a total working week of 44 hours and 30 minutes. While Howe's weekly aggregate record remained until at least 2005, his daily record tally was broken using machine shears by Ted Reick in 1950.
Kevin Sarre was one of the world’s greatest 20th Century machine shearers. He won many shearing championships including five Australian Titles, was a Golden Shears Winner in 1963 and held World Shearing Record in 1965 of shearing 346 Merinos. In 1963, Kevin in assosciation with the Australian Wool Board, was instrumental in the development of the revolutionary Tally-Hi shearing technique, and went on to supervise the training of this technique throughout Australia. The Tally-Hi shearing technique reduced the time taken to shear a sheep by approximately 30 seconds. Kevin’s daughter daughter Deanne holds the Australian women’s shearing record, having shorn 392 sheep in a day.

Henry Salter (1907–1997) MBE won the first organised shearing contest at Pyramid Hill in 1934 and in 1953 was a machine shearing champion. He continued to use blade shears until he was well into his 80s. In 1946 Salter organised the first Australian shearing school at Kerang, Victoria. During the next 26 years he taught 6,557 students the art of shearing. In 1968 Henry Salter was made a Member of the British Empire for his services to the wool industry.
John Hutchinson O.A.M. from South Australia is a former Australian Shearing Champion who won the first of six Australian championships and demonstrated shearing at the Osaka World Expo. In 1999 John was awarded the Order of Australia Medal for his contribution as a shearer trainer and teacher.

Dwayne Black holds six world records, mainly in shearing endurance or marathon events. On 6 October 2002 he shore 570 Merino lambs in 9 hours at Yeeramulla, Badgingarra, Western Australia. In April 2005, he spent 9 hours shearing 513 Merino ewes, 6 more than the previous world record. In October of the same year he shore 519 crossbred lambs at the showground, Bendigo, Victoria.
On 2 March 2007, Broomehill shearer Brendan Boyle set the world 24-hour sheep shearing record by shearing 841 full wool Merino sheep, and in the process raised over $20,000 for the fight against prostate cancer. It was the first time a record has been set in 24 hours sheep shearing. However, for the record to be officially recognized, it needs to be overseen by the World Sheep Shearing Records Committee. This committee has a set of rules, and official referees in three member countries for the specific purpose of ensuring records are set under the same rules and consistent referees in these countries.

Some parts of this are extracted From: Sheep shearing. (2011, October 21). In Wikipedia, The Free Encyclopedia. http://en.wikipedia.org/w/index.php?title=Sheep_shearing&oldid=456628610