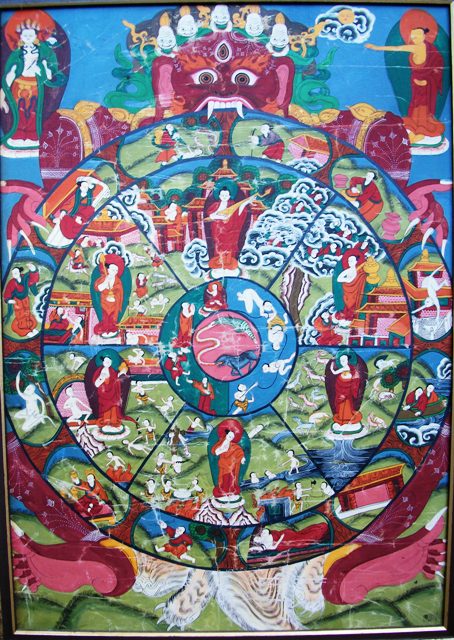 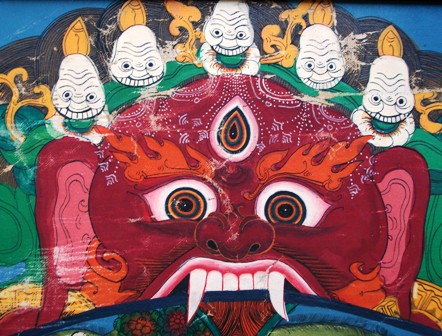 Thangkas are traditional Tibetan painted tapestries or cloth scrolls designed as aids in meditation. Painted on cotton or linen, they usually contain images of deities and religious figures and often are representations of spiritual or historical events. Alike mandalas both making a thangka and gazing at one are regarded as forms of meditation. The idea is to lose oneself in thangka not express it. Traditionally, they were never bought or sold. [Source: Edward Wong, New York Times, March 29, 2009]

Wheel of Life or Bhavacakra
From Wikipedia, the free encyclopedia:

The Bhavacakra is a symbolic representation of samsara (or cyclic existence) found on the outside walls of Tibetan Buddhist temples and monasteries in the Indo-Tibet region. In the Mahayana Buddhist tradition, it is believed that the drawing was designed by the Buddha himself in order to help ordinary people understand the Buddhist teachings.

Explanation of the diagram

The meanings of the main parts of the diagram are:

Symbolically, the three inner circles, moving from the center outward, show that the three poisons of ignorance, attachment, and aversion give rise to positive and negative actions; these actions and their results are called karma. Karma in turn gives rise to the six realms, which represent the different types of suffering within samsara.

The fourth and outer layer of the wheel symbolizes the twelve links of dependent origination; these links indicate how the sources of suffering—the three poisons and karma—produce lives within cyclic existence.

The fierce being holding the wheel represents impermanence; this symbolizes that the entire process of samsara or cyclic existence is impermanent, transient, constantly changing. The moon above the wheel indicates liberation. The Buddha is pointing to the moon, indicating that liberation from samsara is possible.

Bhavacakra. (2011, August 7). In Wikipedia, The Free Encyclopedia. Retrieved from http://en.wikipedia.org/w/index.php?title=Bhavacakra&oldid=443559122