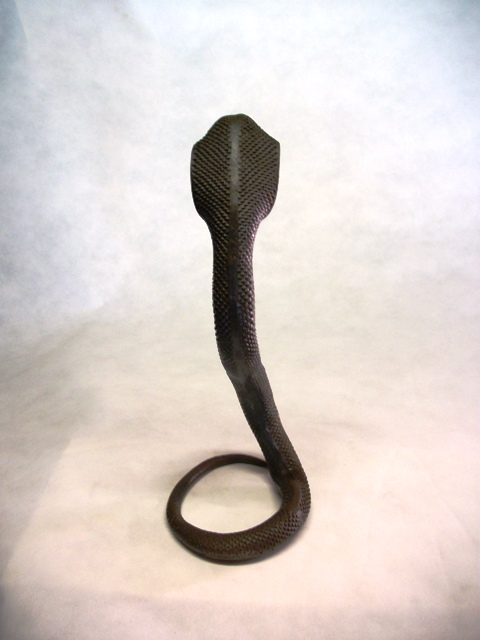 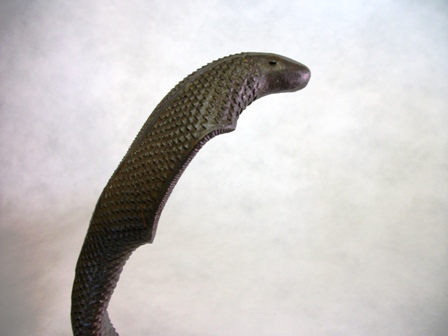 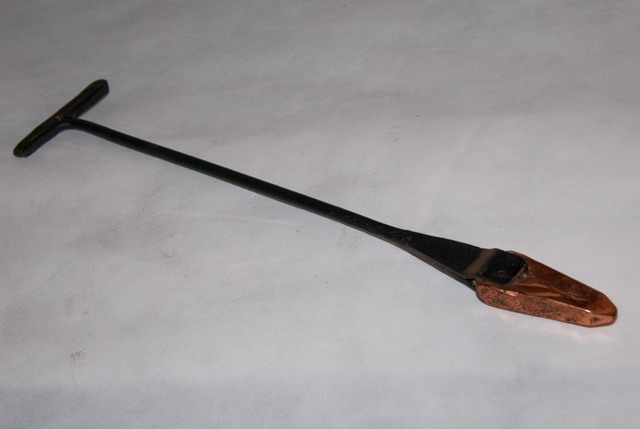 In our first collector’s corner we look at two pieces from Trevor Goodacre, a modern rasp shaped into a cobra by a working blacksmith at Gunnedah, who proves the vocation, at least in rural areas, is still alive and developing, and a colonial copper tipped soldering iron. These were used mainly by what were defined as ‘tinsmiths’ in the early days of Australia. The tip was heated and used to melt what was called flux along the joints of tin or similar metals. Tinsmiths did not require the large forges used by blacksmiths as their mostly hand held tools could be heated to a point to be useful in a stove or smaller fire.

Rasps are an older version and similar tools to files only they may be used to shape woodwork and softer metallic materials. They have larger ‘teeth’. Archaeologists have found some dating back to 1200 BC , and made from bronze, in Egypt. Blacksmiths used to and still make horseshoes and were called farriers in this occupation, or horse-shoers. The rising need for these protectors of horse’s hooves also gave rise to the vocation’s placement and proliferation from 400 AD up until we stopped riding horses everywhere with the coming of automobiles (cars).

Blacksmiths (From Old English)
The term "blacksmith" comes from the activity of "smiting" iron or the "Black" metal - So named due to the color of the metal after being heated (a key part of the blacksmithing process). Other types of craftsmanship are based on this word, for example the term "gunsmith". In the modern process of making guns the preferred method is by milling the metal rather than forging it, this indicates that the term comes from the word "blacksmith".
Smith: The name originally derives from smið or smiþ, the Old English term meaning one who works in metal related to the word smitan, the Old English form of smite, which also meant strike (as in early 17th century Biblical English: the verb "to smite" = to hit). The Old English word smiþ comes from the Proto-Germanic word smiþaz. Smithy comes from the Old English word smiððe from the Proto-Germanic smiðjon. Another possible source is that "smite" referred to the occupation of being a warrior. The fact that he wore armour, which would have required repair, may have contributed to the other meaning.
Smithing process
Blacksmiths work with iron, the 'black' metal, and steel its derivative. The black color comes from fire scale, a layer of oxides that forms on the surface of the metal during heating. The term 'smith' originates from the word 'smite', which means 'to hit'. Thus, a blacksmith is a person who smites black metal. Smith is an English-language family name (surname) originating in the British Isles. It is the most common surname in the United Kingdom, Australia and the United States, the second most common surname in Canada, and the fifth most common surname in Ireland.
Blacksmiths work by heating pieces of wrought iron or steel until the metal becomes soft enough to be shaped with hand tools, such as a hammer, anvil and chisel. Heating is accomplished by the use of a forge fueled by propane, natural gas, coal, charcoal, or coke.
Modern blacksmiths may also employ an oxyacetylene or similar blowtorch for more localized heating. Color is important for indicating the temperature and workability of the metal: As iron is heated to increasing temperatures, it first glows red, then orange, yellow, and finally white; then it melts. The ideal heat for most forging is the bright yellow-orange color appropriately known as a "forging heat." Because they must be able to see the glowing color of the metal, some blacksmiths work in dim, low-light conditions. The techniques of smithing may be roughly divided into forging (sometimes called "sculpting"), welding, heat treating, and finishing.
From; http://en.wikipedia.org/wiki/Smith_(surname)
And http://en.wikipedia.org/wiki/Blacksmith