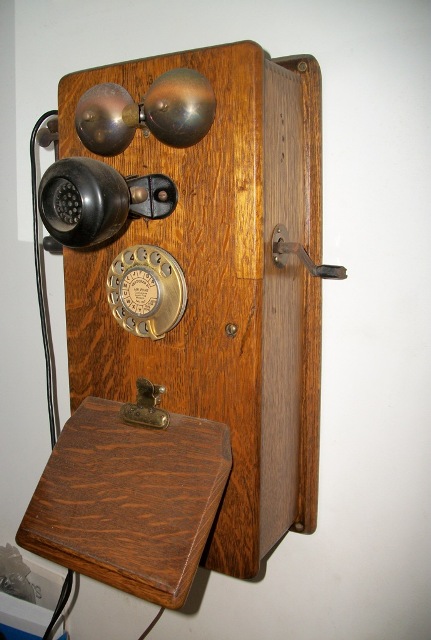 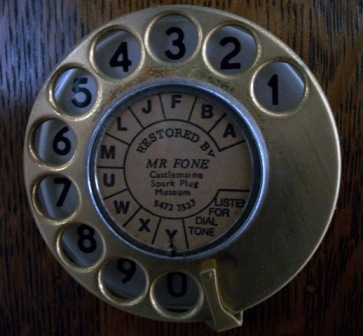 Wood wall-mounted telephones were the first phones put into wide circulation following Alexander Graham Bell's invention in 1876. Typically tall and bulky, they needed several compartments to hold the batteries and magneto (a hand cranked generator to signal the operator). The earliest (and most valuable) wood phones were hand crafted of walnut. Later wood phones were mass-produced of oak, up through WW2.

This one, from the 1920’s may have been built locally based on the UK ‘100’ series. The handmade wooden case contained the telephone circuit and had the transmitter mouthpiece screwed onto the front of the box and the switch hook, holding the receiver, protruding from the left hand side. Below the mouthpiece was a dial-mount, which either contained a dial(L) or a blanking plate (CB). This made it a true, one-piece telephone which was available either 'stand alone', mounted on a handsome, wooden, back-board, with integral writing desk or, as a Tele. 123, combined with the original, Button A & B coin-box.

Australia's first telephone service (connecting the Melbourne and South Melbourne offices of Robinson Brothers) was launched in 1879, with the first telephone exchange opened in Melbourne in 1880 shortly before the hanging of bushranger Ned Kelly. Around 7,757 calls were handled in 1884.

Telephones in Australia were originally looked after by each colony with each having its own Telegraph and Postal system, some supplied by State Railways. The first Telegraph line was installed in 1854 and ran from Melbourne to Williamstown. By 1856 the line’s length had grown to 36 miles and was transmitting 14,738 messages a year. The first telephone system was launched in 1879 and connected the South Australian and Melbourne offices of Robinson Brothers. In 1880 the first telephone exchange was opened in Melbourne which, by 1884, was processing around 7, 757 calls per year.

In 1901, with the Commonwealth Of Australia coming into being, the Post Master General Department became responsible for all telegraph, mail and the telephone systems. A commercial entity called the Australia Post Office evolved after World War One (This was later split into Australia Post 1950 and Telecom Australia 1975). At the time of Federation (1901) inner Sydney had 7,502 subscribers. A trunk line to Melbourne was not established until 1907. The other states were gradually linked with Hobart (Tasmania) was the last to be linked in 1935.

Initially Australia imported most of its telephones from Britain. A large local manufacturing industry began when AWA and STC learnt more about the technology and were able to produce many parts locally. The Post Master General was keen to promote and build a local industry and also awarded contracts to AWA, STC, TMC and Ericssons. Workshops thrived in all States until the introduction of competitors and imported mobile phones in the early 1980’s.

Cradle
The part at the top of a phone that holds the handset. On a desk phone it is supported on the PILLAR.
Crank
The handle on the generator of a magneto telephone. Mostly they are straight, but some early U.S. models had a curved "dogleg" crank. Wood Case Crank Phone is from Trevor’s Museum