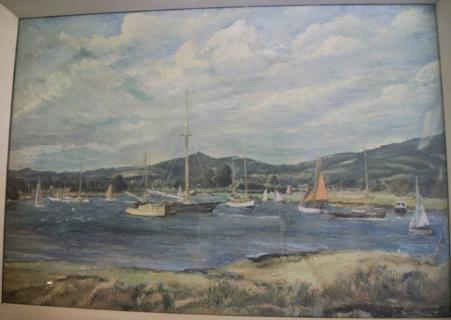 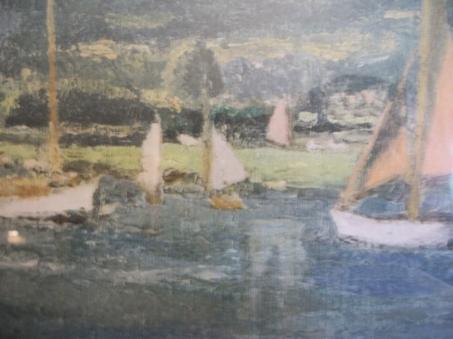 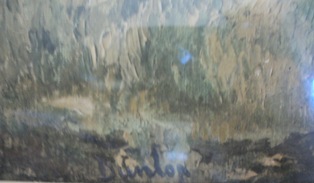 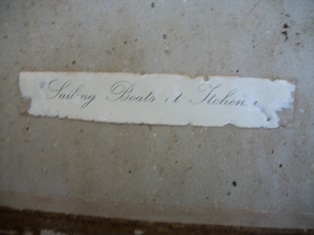 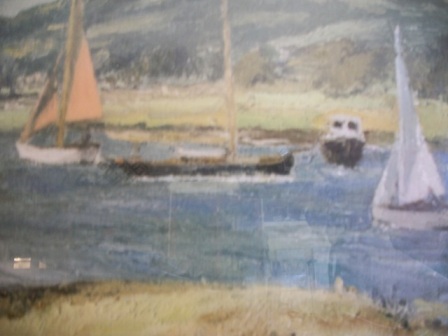 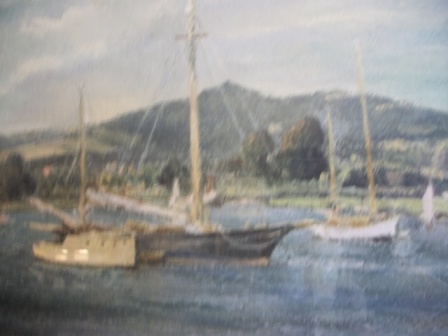 Ronald Ossory Dunlop (1894–1973) was an Irish author and painter in oil of landscapes, seascapes, figure studies, portraits and still life. Dunlop was born in Dublin, Ireland. He studied at Manchester School of Art and in Paris, having spent some time working in an advertising agency. He became a prolific exhibitor, venues including the NEAC, Leicester and Redfern Galleries, RSA, RHA and the Glasgow Institute of Fine Art. His first one man show (1928) was at the Redfern Gallery in Cork Street, London. The Redfern Gallery was founded in September 1923 on the top floor of Redfern House at 27 Old Bond Street, London W1, as a small artists' cooperative. In 1923 he was part of a group of young artists who all exhibited at the Hurricane Lamp Gallery in Chelsea. In 1928 this group published a journal called Emotionism and founded the Emotionist Group of writers and artists. Mr Dunlop supplied what some state is ‘a rather vague manifesto’; Art is the expression of the essence of life, a poem, and an illustration of one of his paintings, 'The Fish Market'.

He expanded his exhibiting circle, showing with the NEAC and later with the RA and the RBA. He maintained his Irish connections, returning periodically to paint in Dublin and submitting a number of works to the RHA in the 1940s and 1950s. Ronald Dunlop was also a prolific author of books; Modern Still Life Painting in Oil (London 1938), Understanding Pictures (London 1948), Painting for Pleasure (London 1951), Sketching for Pleasure (London 1952), How to Paint for Pleasure (New York 1953), Ancient Arundel (London 1953), Landscape Painting: Ma Yuan to Picasso (London 1954), and an autobiography: Struggling with Paint: Some Reminiscences (London, 1956). Examples of his paintings can be seen in the Crawford Gallery, Cork, and the Tate Gallery and National Portrait Gallery, London.

Most of his life was spent in England, latterly at Barnham, West Sussex, close to Chichester, where he painted many water and sailing scenes including this one. He achieved fame in his lifetime, having been elected a full member of the Royal Academy in 1950, and his work is instantly recognisable, although some are cited as fakes which have appeared on the market over the past thirty years, after his passing. A good reason to purchase artworks from their painter while you can or deal only through a reputable Art Dealer. Alex Fraser of Vancouver was Dunlop's dealer in London and again later in Canada once Fraser had emigrated in the 1940s.

Dunlop's mother, Eleanor (née Fitzpatrick) was a watercolour artist and his father, Daniel Nicol Dunlop (1868-1935), was a great friend of W. B. Yeats, James Stephens and George Russell, or ‘Æ’. Together Yeats, ‘Æ’ and Daniel Nicol Dunlop published The Irish Theosophist from the home of Eleanor’s father, the Shakespearean scholar R.H. Fitzpatrick.

Clearly Mr Dunlop grew up surrounded by the seminal figures of the Irish Literary Renaissance, in an atmosphere of mysticism and Spiritualism. The Dunlop family moved to New York in 1899, then London three years later. From here, they made the annual pilgrimage back to Dublin during Horse Show week, with Dunlop’s father returning to London clutching two or three more ‘Æ’ canvasses each time. Dunlop trained in art in London, associating with a group of young artists who exhibited at the Hurricane Lamp Gallery in Chelsea. In 1928 the group published a journal called Emotionism: Dunlop supplied a rather vague manifesto ("Art is the expression of the essence of life"), a poem, and an illustration of one of his paintings, "The Fish Market". Dunlop soon expanded his exhibiting circle, showing with the New English Art Club and later with the Royal Academy and the Royal Society of British Artists. He maintained his Irish connections, returning periodically to paint in Dublin and submitting a number of works to the RHA in the 1940s and 1950s.

Dunlop studied at Manchester and Wimbledon as well as Paris. Frances Spalding described him as an 'alla prima' painter of traditional subjects. At some stage he settled in Barnham, West Sussex, and in 1947 or 1948 exhibited at Bognor Regis, which is what led to the Bibby connection mentioned below.

Although there are a few other Itchenor and Boats at Itchenor paintings around, some exhibited in esteemed galleries such as the Tate, none seem to have this one listed. Mr Dunlop clearly had a passion for the sea and its vessels, perfectly normal for an Irish lad.

Ossory, also spelled Osraighe, was an ancient kingdom of Ireland that won for itself a semi-independent position as a state within the kingdom of Leinster, around the 1st century ad.

Itchenor Sailing Club is a leading sailing club located in Chichester Harbour which was founded in 1927. According some sources their mirror fleet at Itchenor is the biggest and most active fleet in the UK and possibly the world comprising just over 100 boats. The Sailing Club races every Saturday and Sunday from April to November with midweek racing for keel boats, as well as specific weeks for Class Regattas. Classes A comprehensive programme is run for keelboat classes: National Swallow, Solent Sunbeam, X-One-Designs and for jetty dinghy classes: International 14, RSK6, RS800, RS200,International 420, Topper and Mirror. Open Meetings are held for most classes, including the annual Schools Week. Schools Week (also known as Schools Championship) is an inter-schools sailing competition which is organised and run by Itchenor Sailing Club. It was started in 1953 under the name of 'The Public Schools Firefly Invitation Championships'. There are Olympians amongst club members dating back to the 1936 Summer Olympics. 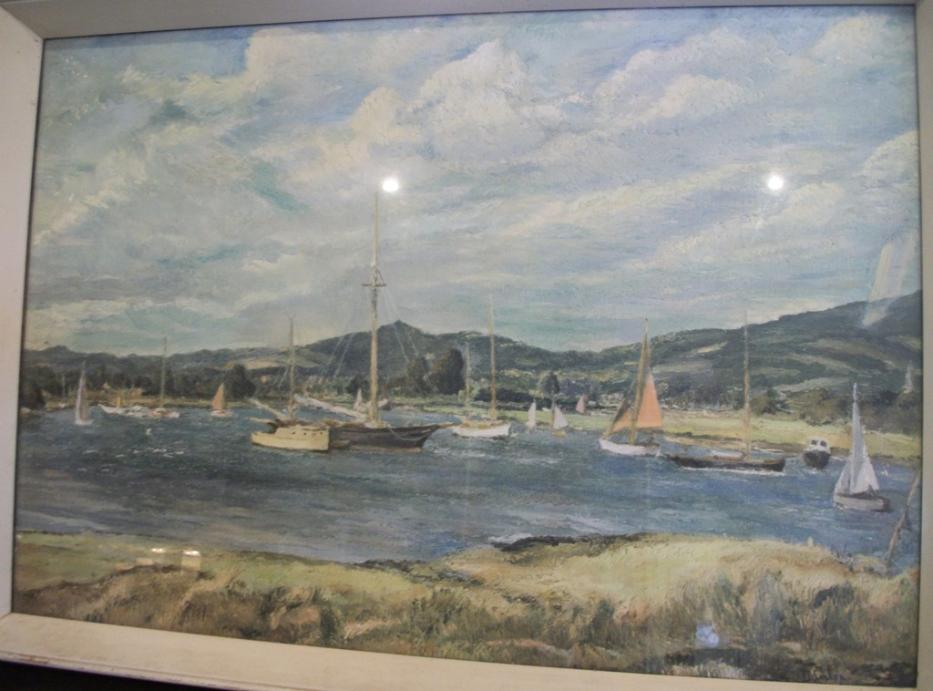