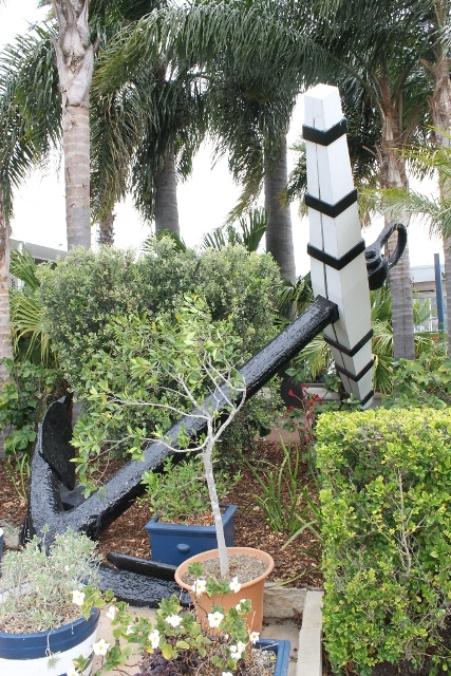 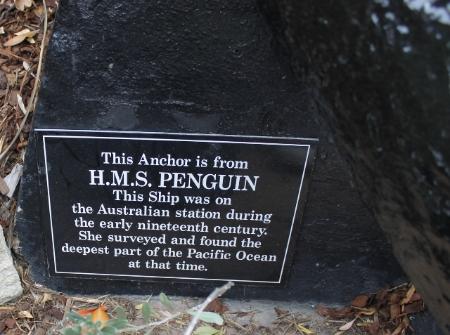 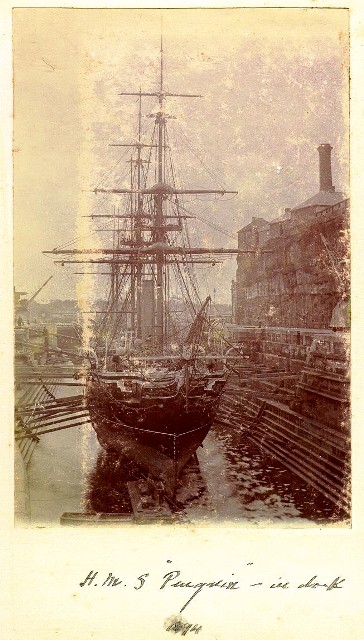 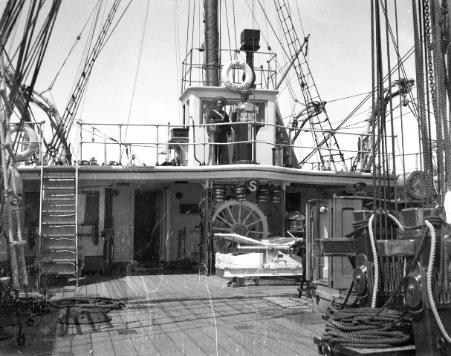 Looking aft towards the quarterdeck on HMS 'Penguin', ascribed to Commander Willoughby Pudsey Dawson, 1902-05 and part of the Klein Collection. 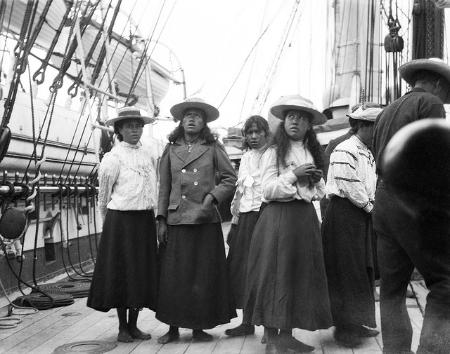 Collecting or displaying maritime equipment or anything associated with famous vessels has become very popular. Everything from snuff boxes owned by Captains and Commodores to letters written by those who perished on fateful voyages attracts historians, museums, maritime clubs and private collectors to auction rooms globally. In 2001 an auction at Christies in London listed items from over two hundred years of Great Britain’s vessels with prices from a few hundred pounds up to the thousand of pounds being the reserve. In the latter case a letter from a sailor on the Titanic and a snuff box given by Lord Nelson were what was deemed more valuable then bells, whistles or plans for ships sunk during WWI or WWII.

Current Maritime Antique’s websites offer everything from cutlasses to antique diving helmets and range from hundreds to thousand of dollars too. Those that can prove provenance of a historical event or association with a famous maritime person or legend once again attract a higher price. As always the rarer the more expensive but always ensure claims are backed up.

In some instances the collector simply admires the equipment. In other cases the heritage of a nation is being maintained long after a vessel or incident may have slipped from the mind or be an unknown to a new upcoming generation.

At the entrance to the Royal Prince Alfred Yacht Club at Newport rests the anchor from HMS Penguin. An Admiralty Pattern long shanked anchor, weighing in at over a tonne, this beauty once was part of the survey vessel that made Australian waters safer for all who move on them.

The Admiralty Pattern anchor, also known as the ‘Fisherman’,  is the most familiar anchor among non-sailors. It consists of a central shank with a ring or shackle for attaching the rode. At one end of the shank there are two arms, carrying the flukes, while the stock is mounted to the other end, at ninety degrees to the arms. When the anchor lands on the bottom, it will generally fall over with the arms parallel to the seabed. As a strain comes onto the rode, the stock will dig into the bottom, canting the anchor until one of the flukes catches and digs into the bottom. This basic design remained unchanged for centuries, with the most significant changes being to the overall proportions, and a move from wooden stocks to those of iron.

About the HMS Penguin:

HMS Penguin was an Osprey-class sloop. Launched in 1876, Penguin was operated by the Royal Navy from 1877 to 1881, then from 1886 to 1889. During her second commission she took part in the suppression of the slave trade on the East African coast and in 1888 she also took part in the blockade of Zanzibar. Penguin returned to England in 1889.

After being converted to a survey vessel, Penguin was recommissioned in 1890, and operated until 1908, when she was demasted and transferred to the Australian Commonwealth Naval Forces for use as a depot and training ship in Sydney Harbour. After this force became the Royal Australian Navy, the sloop was commissioned as HMAS Penguin on July 1st, 1913. Penguin remained in naval service until 1924, when she was sold off and converted into a floating crane. The vessel survived until 1960, when she was broken up and burnt. Her hull was sold to Samuel Waugh Ltd and converted into a crane hulk at Sydney in 1924. Later sold for breaking up, her hull was burnt on 13 December 1960 at Kerosene Bay, Sydney.

One of the most famous operations HMS Penguin undertook was rescuing survivors of the steamship ‘Elingamite’. The photographs here, taken by the 'Penguin's' captain, Commander Willoughby Dawson, are part of the National Martime Museum’s collection on Flickr which relate to this rescue. On 9 November 1902 the 'Elingamite' steaming from Sydney for Auckland ran into West King Island off North Island, New Zealand, in a thick fog and sank. Six boats and two life rafts were launched. The 'Penguin' was dispatched from Auckland Harbour to locate survivors on 11 November 1902. At 15:50 on 13 November the 'Penguin' came across a life raft containing eight survivors (a further eight on the raft had died) and brought them to Auckland. A total of 45 people were lost.

Anchors at entrances to Yacht Clubs, Surf Clubs, Returned Services League clubs and in parks along the Australian coast are a familiar sight. Ours is a rich Maritime history. Many have been recovered by divers from wrecks during the 1960’s and 1970’s. They symbolise an ‘at anchor’ state for vessels berthed, they also are a symbol for stability and a strong foundation. In ancient times they were used by the first Christians as a symbol of the cross.

“How wise and how merciful is that provision of nature by which his earthly anchor is usually loosened by many little imperceptible tugs, until his consciousness has drifted out of its untenable earthly harbor into the great sea beyond!” Arthur Conan Doyle, Sr. quotes (Scottish writer, creator of the detective Sherlock Holmes, 1859-1930)

TASMANIAN SOCIAL ITEMS. [FROM OUR HOBART CORRESPONDENT.] THE signal for the commencement of the regular round of summer gaiety was given by the arrival of the warships. H.M.S.' Penguin ' was the first to drop anchor up the Harbour, some days before Christmas, and was followed by the 'Orlando,''Lizard,' 'Cordelia,' and 'Royalist.' TASMANIAN SOCIAL ITEMS. (1891, January 17). Illustrated Sydney News (NSW : 1853 - 1872), p. 15. Retrieved from http://nla.gov.au/nla.news-article63612014

HMS 'Penguin' - Klein collection
The Klein Collection consists of 12 negatives that relate to the commission of HMS 'Penguin' when stationed at Australia between 1902 and 1905. Retrieved from: HERE

Items listed on some of these websites include extensive histories of the items as well as their manufacturers!
Marine, Nautical Antiques and Artefacts: http://landandseacollection.com/
Anchor found at North Head: HERE

Anchors of Many Shapes.
Up to the beginning of the last century the anchor in use by mariners differed greatly from that now seen upon vessels. It consisted of a long, round iron shank. having two comparatively short, straight anna, or liukes, inclined to the shank at an angle of about 40deg., and meeting It in a somewhat •harp point at the crown. In large anchors the bulky wooden stock was built up of several pieces, hooped together, the whole tapering outward to the ends, especially on the aft or cable side. About the beginning of the hut century a clerk In the Plymouth (England) naval yard, Pering by name, suggested certain improvements, the most important of which was making the arms curved instead of straight. At first sight this simple change may seem of little value, but consideration will show that this is not the case. The holding power of an anchor depends on two principal conditions—namely, the extent of useful holding surface and the amount of vertical penetration. The latter quality is necessary on account of the nature of ordinary sea bottoms, the surface layers of which are generally less tenacious and resisting than is the ground a short distance below.

In the year 1831 chain cables began to supersede the hempen ones, with the result that the long shanked anchors hitherto in vogue were no longer necessary, and anchors with shorter shanks and with heavier and stronger crowns gradually came into use. In consequence of these changes, a commission was appointed in the year 1838 to inquire into the holding power of anchors, and a principal result of its labours was the adoption of the so called Admiralty pattern anchor, which continued to be used in the navy up to the year 1860. The invention of the steam hammer, in 1842, made the welding of heavy finishes of iron a comparatively easy and reliable process, so that from this time onwards the strength of anchors fully-Kept pace with that of the chain cables which had come into general use.  A number of patents for anchors were taken out prior to the great exhibition of 1851, and, public attention having been called to the models there shown, in the following year a committee was appointed by the Admiralty to report on the qualifications of anchors of the various kinds. Practical trials were then instituted, and as a result Trotman's anchor took the highest place. Rodger's anchor being second on the list- Some of the tests to which the anchors were submitted were of doubtful value, such, for instance, as "facility for sweeping." Nowadays, however, at all events, for deep ships in shallow harbours, it is considered an advantage for an anchor to offer as little obstruction as possible above the ground.
Anchors of Many Shapes. (1904, February 6). The Queenslander (Brisbane, Qld. : 1866 - 1939), p. 23. Retrieved from http://nla.gov.au/nla.news-article22260752 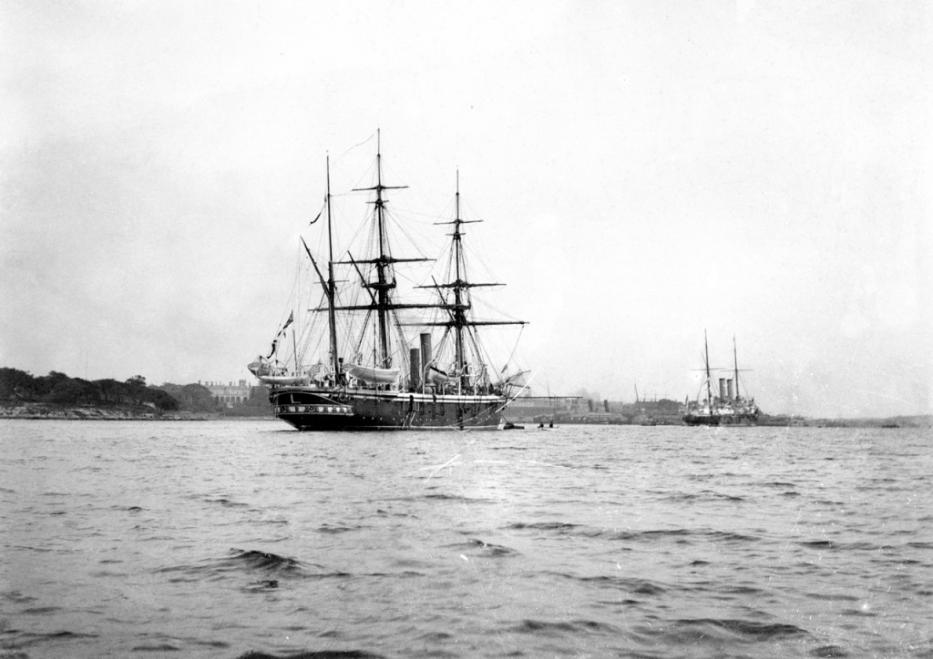 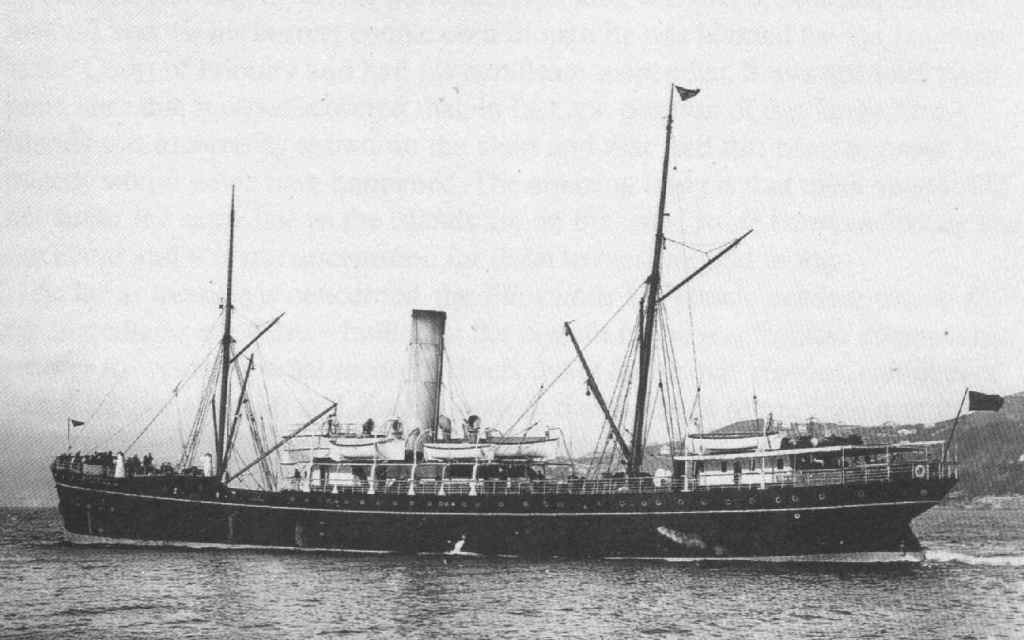 SS Elingamite was an Australian passenger steamer of 2,585 tons, built in 1887, and owned by Huddart Parker, based originally on the wharves of Geelong. SS Elingamite was wrecked in 1902 off the north coast of New Zealand carrying a large consignment of gold. Elingamite arrived at Sydney, Australia, on 22 November 1887, having departed from Newcastle upon Tyne in England on 24 September, where she had been built by C.S. Swan & Hunter. She was a steel-hulled screw steamer 320 feet (98 m) long, 40 feet 9 inches (12.42 m) in the beam, with a depth of 22 feet 3 inches (6.78 m) and powered by triple-expansion compound steam engines, built by the Wallsend Slipway & Engineering Company, which gave her a top speed of 11 knots (20 km/h; 13 mph). There was accommodation for 100 passengers in 1st class, and another 100 in steerage. The Victorian government had selected her for use as an armed cruiser, and she had fittings in place for four Armstrong 36-pounder guns (two forward and two aft), and machine-guns amidships. She was schooner-rigged on two pole masts.

Elingamite left Sydney early on Sunday morning, 5 November 1902, on the regular Tasman Sea run between Sydney and Auckland. Captain Ernest Atwood was in charge. On board were 136 passengers and 58 crew, and a consignment of 52 boxes of coins for banks in New Zealand, including 6,000 gold half-sovereigns. The voyage was uneventful until mid-morning on the 9th when the ship suddenly encountered thick fog. Captain Atwood took necessary precautions, but the vessel struck West Island, one of the islands in the Three Kings group, about 35 nautical miles (65 km) north of Cape Reinga on the northern tip of mainland New Zealand. The vessel foundered and sank within 20 minutes, but those on board managed to escape in lifeboats and rafts, some taking survivors to King Islands and some to the mainland. One lifeboat was never seen again. Forty-five died (28 passengers and 17 crew).

Aftermath
A court of enquiry into the sinking began at Auckland on 28 November and lasted about two months. Captain Atwood was found guilty of grossly negligent navigation (and on other matters), and his masters’ certificate was suspended. Eight years later the Australian Naval Station reported that the Three Kings were wrongly charted. In 1911, the Terra Nova surveyed the area and established the Three Kings group to be a mile and a quarter south, and a third of a mile east, of their position shown on Captain Atwood's chart. The enquiry was reopened and the court found that the sinking would never have happened had the chart been accurate. Captain Atwood was cleared of all charges and later became a ship surveyor at Wellington where he died in the 1930s.

Salvage
Over the years there have been exaggerated claims that there was unregistered bullion aboard, and inflated tales about the true value of the coins on board when she sank. It was worth £17,320 (approximately equivalent to $2 million in 2004 U.S. dollars); less than claimed by urban legends. For almost 30 years the Elingamite wreck has been a favourite site for adventurous divers and although widely dispersed and now relatively scarce, some coins have been recovered. The wreck is now privately owned, having passed through several hands after auction of the rights to the wreck by the original insurance company.

Extract from SS Elingamite. (2012, December 11). In Wikipedia, The Free Encyclopedia. Retrieved from http://en.wikipedia.org/w/index.php?title=SS_Elingamite&oldid=527615608