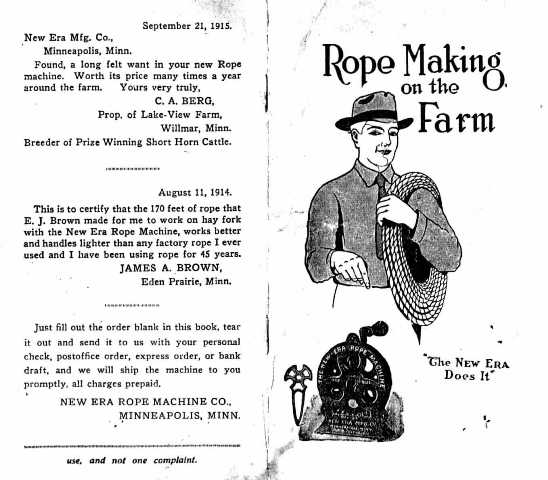 Evidence points to rope making in Europe at least 28 000 years ago with fossils in a cave at at Lascaux, dating to approximately 15,000 BC. Leonardo da Vinci, much later, drew sketches of a rope making machine but it was not until the early 18th century that these machines began to be built.

The New Era Rope Making machine, also called the ‘Hawkeye’, the one shown here, from Trevor’s Museum was made by and Patented by A. D. Long  of Fairfield, Iowa in 1911. In Australia identical contraptions were made by Metters Ltd an Adelaide company formed by Frederick Metters (1858–1937) in 1891, who also became famous for their range of cooking stoves, notably the ‘Early Kooka’. The Metters one shown here is a 1928 version, made in Western Australia.

How to use a Rope Making Machine;

Twisted ropes are built up in three steps. First, fibres are gathered and spun into yarns. A number of these yarns are then formed into strands by twisting. The strands are then twisted together to lay the rope. The twist of the yarn is opposite to that of the strand, and that in turn is opposite to that of the rope. It is this counter-twist, introduced with each successive operation, which holds the final rope together as a stable, unified object.

Traditionally, a three strand laid rope is called a plain- or hawser-laid, a four strand rope is called shroud-laid, and a larger rope formed by counter-twisting three or more multi-strand ropes together is called cable-laid. From Rope. (2011, December 28). In Wikipedia, The Free Encyclopedia. Retrieved from http://en.wikipedia.org/w/index.php?title=Rope&oldid=468015650 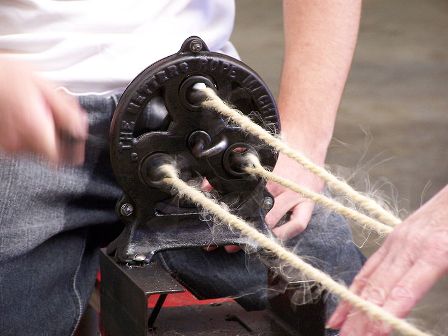