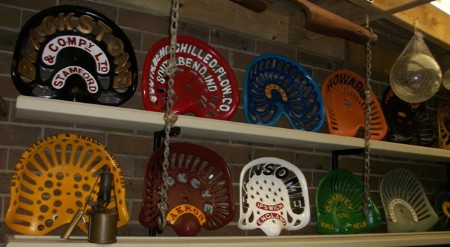 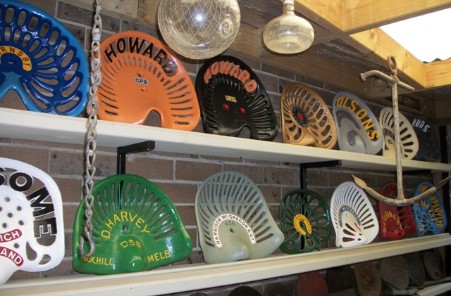 Cast iron seats were made for the horse drawn implements from about 1850 through 1900. Most of the seats came from implements that were built in munitions factories following the American Civil War. After 1900 these seats were made from pressed steel. It is estimated there are between 1600 to 2000 versions with one of a kind's sought by collectors worldwide.

Some consider the implement seat as the greatest improvement in agriculture. When a farmer could ride instead of walking behind the machine it left his feet free to operate levers and drive a team of horses. It was in this era that agriculture began to grow.

The seats were cast out of brittle cast iron; some had round holes, some had frills or curves and some had lace effects.  Many had the name of the manufacturer cast into them, some indicated the city where they were made, and some of the seats had a patent date included in their face.

Those that we show here form part of Trevor's Museum and have all been restored by him.