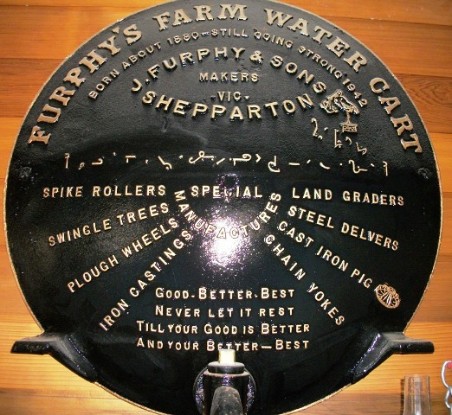 The term ‘a Furphy’ has come into the Australian language from what was a required piece of equipment on the battlefields of WWI. These carst were used extensively in the Middle East and Europe during this conflict and their drivers, moving from place to place, brought updates on what was happening or gossip that proved unreliable in some instances, thus giving born to the term ‘a furphy’. 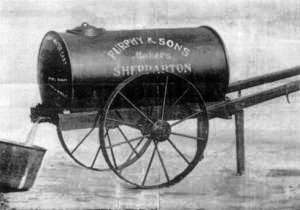 The water cart was invented by John Furphy in 1880 and was unique at that time in Australia. Prior to his invention carts drawn by horses carried water in barrels to where it was needed. During this year a growing demand for farming implements lead to the development of casting components rather then forging them. John Furphy, born 17th of June, 1842, an engineer and blacksmith of Shepperton, Victoria, developed a method of sealing the cast iron ends and cylinder between with bands of steel. When loaded with water they weighed around a ton. They proved a hit and quickly spread from the Riverina area of Victoria to all states.

The end pictured here, from Trevor’s Museum, is circa 1898. Prior to then the cast endings were plain or simply cast with ‘Furphy’ at the top of the plate. Later on other ‘phrases’ were employed to suit or highlight current trends or historic events; from the official Furphy website: “in 1942, William added a modified version of the saying attributed to W M Hughes, the prime minister of Australia, together with an illustration of a stork holding a baby in traditional fashion. The statement, also in shorthand, read "Produce and populate or perish."
At: http://www.furphys.com.au/history/the-famous-furphy-water-cart.html