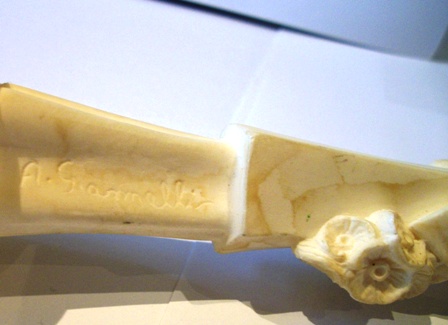 The artist, Cav. Arnaldo Giannelli, was an Italian master sculpture.  Born in Volterra in 1907, he was a keen student of sculpture and graduated from the Royal School of Art. In 1944 he opened his own studio and produced pieces also for the Allied Forces. In 1953, he was appointed president of the Alabaster Craftsmen Guild, a position he held until 1961. His most famous pieces are a bust of Dwight D. Eisenhower and a three meter high totem for Boston University. For his professional achievements, he was awarded the title of  ‘Cavaliere della Republica’ in 1970.

Today the factory he started, Egregia, in Volterra, a city of Italy in Tuscany, is still famous for its alabaster manufacture. Tuscan alabaster occurs in nodular masses embedded in limestone, interstratified with marls of Miocene and Pliocene age. The mineral is worked largely by means of underground galleries, in the district of Volterra. Several varieties are recognized—veined, spotted, clouded, agatiform, and others. The pieces that the factory produces, in recomposed stone, are made of alabaster, marble powder and resin. Many of these are the original models of the sculptures made by Cav. Arnaldo Giannelli and are produced in quantity, which does not mean they are cheap. Although some pieces retail for between $30-40.00 others fetch $200.00 and more.

The one shown here, of an oriental lady with fan and flowers in alabaster on a marble base is circa 1940-1950. She is 18 ½ cm tall and measures 5cm across the base. These currently trade between collectors for $40- $200.00 depending on their rarity, the condition of the piece and who wants to expand their collection. Other pieces start from $200, particularly if made from silver.