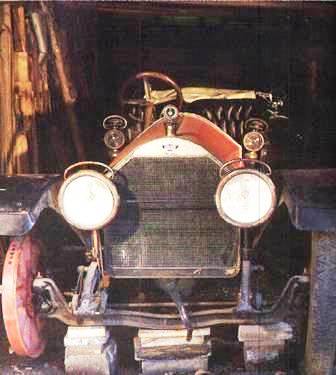 The Stutz Bearcat was a well-known American sports car of the pre and post World War One period. Essentially, the Bearcats were a shorter (120" wheelbase vs 130"), lighter version of the standard Stutz passenger cars chassis. Common with racing and sports cars of the period, it featured minimal bodywork consisting of a "dog house" hood, open bucket seats, a tiny "monocle" windscreen in front of the driver, and a cylindrical fuel tank on a short rear deck. Production Bearcats differed from the factory "White Squadron" racers by having fenders, lights and a trunk. Factory literature from 1913 describes the Bearcat as "The Stutz Bearcat, designed to meet the needs of the customer desiring a car built along the lines of a racing car with a slightly higher gear ratio than our normal torpedo roadster, has met with great favor with motor car owners and meets the demand for a car of this class."

Owning a Stutz Bearcat became a famous status symbol for the wealthy of the era. In 1914 it was priced at $2000, much less than some imported European sports cars, but about two to three times the cost of the average American "basic" car (with the Ford Model T of the day priced at $550).

The history and image of the Stutz Bearcat made it one of the better known antique cars to later generations of Americans. It was often associated with the "Roaring 20s" and college students of that period. It was frequently mentioned with stereotypical accoutrements of the period such as raccoon coats and illicit "bathtub gin".

Alexander Kennedy Miller (1906 – October 23, 1993 [edit] was the only child of a wealthy New York stockbroker and wholesale merchant. He purchased his first Stutz automobile while still in high school. He soon purchased more Stutz cars from bankruptcy auctions and a number of autogyros from the military for a small fraction of their actual value. Miller attended Rutgers University on a scholarship to study mechanical engineering. A note alongside his yearbook picture describes an occasion when he rode down the street on a motorcycle, without a coat, in the wintertime, going to the barber shop "for his quarterly haircut".

In 1941, Miller married Imogene Raymond (1917–1996), the daughter of William Everett Raymond and Maria Louise Cook. During World War II, when Miller discovered he was too old to fly in the U.S. Air Force, he instead joined the Royal Canadian Air Force, rising to the rank of captain. He taught tactical aviation and salvaged damaged aircraft, some of which he would go on to purchase himself and later sell. 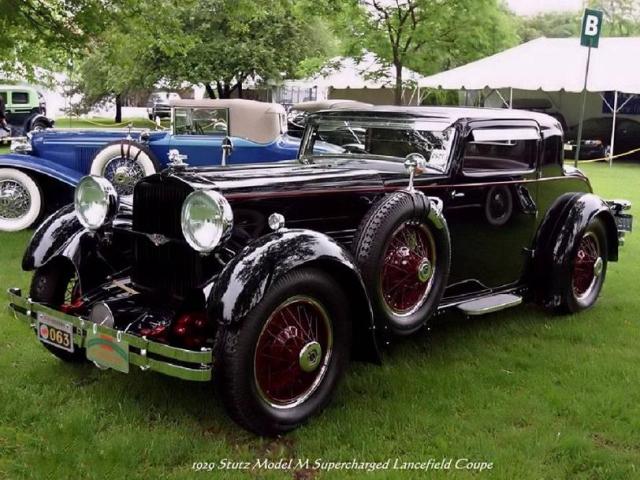 Consider the strange story of Alex and Imogene Miller of East Orange, Vermont.  They eked out an existence on a small farm. Alex would scrounge rusty nails from burnt buildings to repair his roof.  He drove a ratty VW Beetle, and when it died, he found another even more ratty, and another...the rusting carcasses littered his yard.  Alex died in 1993, and Imogene died in 1996.  The local church took up a collection so they could be buried in the churchyard, and the state began the process of taking the farm for taxes.  That would have been the end of a sad story, except...

While preparing the estate for auction, the sheriff discovered a cache of bearer bonds taped to the back of a mirror.  That triggered a comprehensive search of the house and outbuildings.  The estate auction would eventually be handled by Christie's, and it would bring out collectors from all over the world.

It seems that Alex Miller was a Rutgers grad, son of a wealthy financier.  He lived in Montclair, New Jersey, where he founded Miller's Flying Service in 1930.  He operated a gyrocopter for mail and delivery service through the 30's.  But the Millers had a secret, and they moved from Montclair when they needed room for it.

Choosing to live low profile, and paranoid about tax collectors, Miller moved to the farm in Vermont, and took his collections with him. Most of his cash had been exchanged for gold and silver bars and coins, which he buried in various locations around the farm.  He carefully disassembled his gyrocopter, and stored it in an old one-room schoolhouse on his property.  He then built a couple of dozen sheds and barns out of scrap lumber and recycled nails.  In the sheds he put his collection.

Alex Miller had an obsession with cars.  Not just any cars, but Stutz cars. Blackhawks, Bearcats, Super Bearcats, DV16's and 32's.  He had been buying them since the 1920's. When Stutz went out of business, he bought a huge pile of spare parts, which was also carefully stored away in his sheds.

Sometimes he would stray, and buy other "special cars", including Locomobiles, a Stanley , and a Springfield Rolls Royce.  He never drove them.  He'd simply move them into his storage sheds in the middle of the night, each car wrapped in burlap to protect it from any prying eyes.  Over the years, the farm appeared to grow more and more forlorn, even as the collection was growing.

Occasionally he would sell some parts to raise cash.  Rather than dipping into his cache, he would labor for hours making copies of the original parts by hand.

Collectors knew him as a sharp trader, who had good merchandise but was prone to cheating.  His neighbors had no clue at all, they thought Alex and Imogene were paupers, and often helped out with charity.

The auction was a three day circus, billed as the "Opening of King Stutz Tomb."  It attracted celebrity collectors, as well as thousands of curiosity seekers.  The proceeds were in the millions, some items went for far more than their value in the frenzy. In the end, the IRS took a hefty chunk of the cash for back taxes, which proves the old adage about the only two sure things in life.