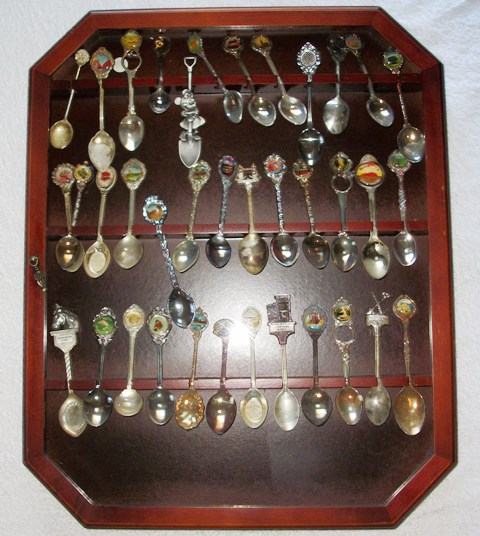 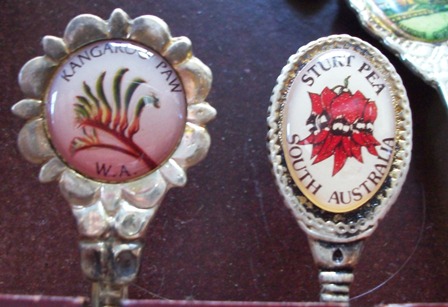 Teaspoons to celebrate your visiting a place, an establishment or local flora and fauna, are collected here, in Australian versions, and when you visit just about anywhere else. Tiny pictures of famous landmark places, small sculptures of famous bridges, buildings, events and more are attached to the top of the teaspoon handle or even are part of etchings in the bowl of the spoon itself. Some collectors build a display case fileld with small racks to show their spoons.

The history of spoons can be traced in the preserved examples of various forms of spoons used by the ancient Egyptians include those composed of ivory, flint, slate and wood; many of them carved with religious symbols. Ancient Indian texts also refer to the use of spoons. For example, the Rigveda refers to spoons during a passage describing the reflection of light as it "touches the spoon's mouth" (RV 8.43.10). The spoons of the Greeks and Romans were chiefly made of bronze and silver and the handle usually takes the form of a spike or pointed stem. The British Museum has examples from which the forms of the various types can be ascertained, the chief points of difference being found in the junction of the bowl with the handle. The origin of the word spoon has been traced to the Anglo-Saxon ‘spon’ meaning ‘wooden chip’. The history of spoons development tells that in the beginning of the 1st century there were two types of spoons in Rome: for the liquid food - ligula and for eating sea products and eggs - cochleare. The spoons differed in shapes: round and oval; and sizes: big and small. It seems that Englishmen inherited the same scheme.

The social status of a person was once determined by their utensils at home or when elsewhere (usually carried with them when travelling). Although the wooden spoon was the everyday cutlery of most, silver and gold spoons were made for and used by those who could afford them, particularly the Royal Families (‘Born with a Silver Spoon in the mouth’). The 14th century brought advances in the use of brass and iron and made finer spoons more available to a wider population.

The collection here contains European but mostly Australian places visited. Our first teaspoons marked commemorative occasions and began appearing in 1901, Year of Federation. It was made in Birmingham, England and has motifs of sheep a ship, wheat and pick axe! Prices range from under $10 to upwards of $2500 for more unusual or rare spoons.