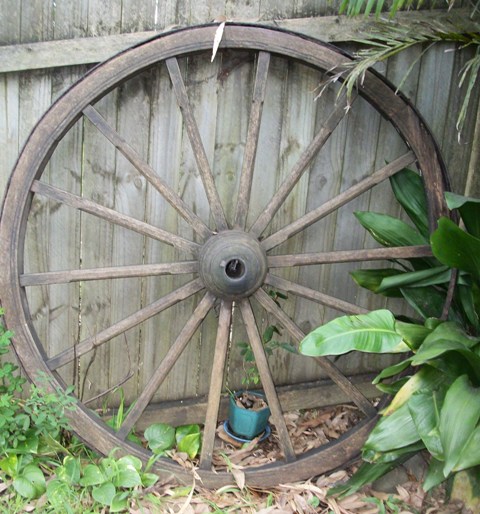 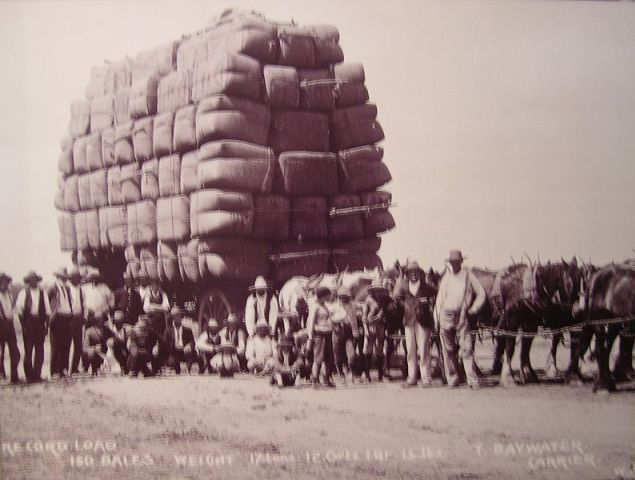 A team of Australian Draught Horses with a record load of 150 bales of wool.  c.1900. Source: Courtesy Hay collection

Above: The American counterpart was the Conestoga wagon, a heavy, broad-wheeled covered wagon that was used extensively during the late 18th century and the 19th century in the United States and sometimes in Canada as well. It was large enough to transport loads up to 8 tons (7 metric tons), and was drawn by horses, mules or oxen. It was designed to resemble a boat, to help it cross rivers and streams, though it sometimes leaked unless caulked. The first known mention of a "Conestoga wagon" was by Ben Garcia on December 31, 1717 in his accounting log after purchasing it from James Hendricks.  It was named after the "Conestoga River" or "Conestoga Township" in Lancaster County, Pennsylvania, and thought to have been introduced by Mennonite German settlers. 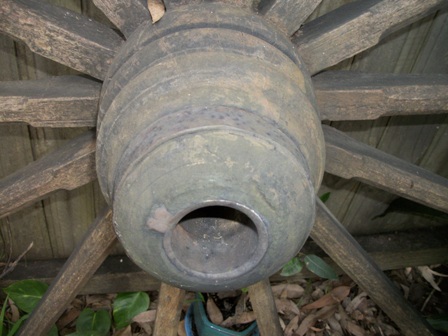 In Bunderberg, QLD a working bullock team at the Gleneden:  http://www.glenedenbullockteam.com.au/

Wheelwright. (2012, May 12). In Wikipedia, The Free Encyclopedia. Retrieved from http://en.wikipedia.org/w/index.php?title=Wheelwright&oldid=492124677

"Do you know the nature of an oath ma'am?" inquired the judge.

"Well, I reckon I 'orter" came the reply. "my husband's a bullock driver."

These wheels were required equipment in Australia’s early days. You may find them in gardens as decorations today but they were once useful for bullocks drays (the main form of moving wool and other supplies to and from rural areas, and also why, in places like Cairns or the southern Victorian smaller towns roads are still wide, in order for the drays to turn). Although called ‘wagon’ wheels, in Australia we used drays and bullocks from earliest settlement. Our first explorers used these to carry expedition equipment and supplies and many of our still current roads are built over the tracks these drays forged, usually along ways that suited their wideness and the loads they were carrying.

Once outlying areas became farmlands, supplies needed were sent out and the drays returned with timber, wool bales, cereal crops and the like for the ships and settlers in the ‘cities’. Sometimes the bullocky (the driver of a bullock team.) had an “offsider” (a form of an apprentice) who walked on the offside (right) of the team and also assisted the bullocky yoke up and care for the team. Many Australians who have never had contact with bullocky or a team still use the word “offsider’ as a synonym for an assistant, helper or learner.

Devon cattle were the preferred ‘bullocks’ as they were cheaper and less excitable then horses, looked good as a team, an important factor for those hiring them as much as the bullocky, and were suited by a dependable nature and are considered hardy creatures that work well as a team. They had to be trained and matched in size. The pairs were connected by a special chain, which ran from a central ring on each yoke to the next pair, thus coupling the team in tandem fashion. The “wheelers” or “polers” were the older, heavier, trained bullocks which were closest to the dray or jinker and helped to slow the load when necessary. 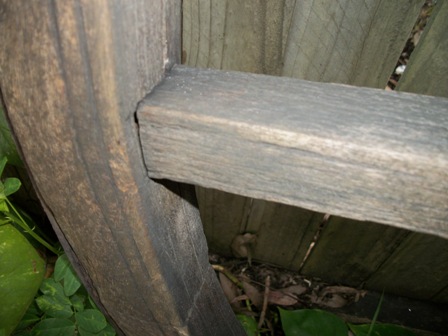 Being a combination of a Wheelwright and Blacksmith was necessary when on the road or to be knowing where they were along your route; A wheelwright (or wainwright) is a person who builds or repairs wheels. The word is the combination of "wheel" and the archaic word "wright", which comes from the Old English word "wryhta", meaning a worker or maker. This occupational name eventually became the English surname Wheelwright.

These tradesmen made wheels for carts and wagons by first constructing the hub, the spokes and the rim/fellows segments, and assembling them all into a unit working from the center of the wheel outwards. Most wheels were made from wood, but other materials have been used, such as bone and horn, for decorative or other purposes. Around the middle of the 19th century, iron strakes were replaced by a solid iron tyre custom made by a blacksmith, who first measured each wheel to ensure proper fit.

Evidence of wheeled vehicles appears from the mid-4th millennium BC, near-simultaneously in Mesopotamia, the Northern Caucasus (Maykop culture) and Central Europe. The earliest well-dated depiction of a wheeled vehicle (here a wagon; four wheels, two axles), is on the Bronocice pot, a ca. 3500–3350 BC clay pot excavated in a Funnelbeaker culture settlement in southern Poland. The earliest known examples of wooden spoked wheels are in the context of the Andronovo culture, dating to ca 2000 BC. 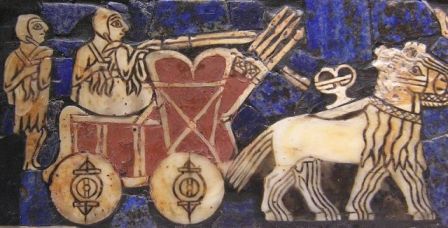 Culturally, or in the food world, Wagon Wheels are a snack food sold in Australia,  Canada, Iran, Malta, the Republic of Ireland, Russia and the United Kingdom. They are biscuits topped with marshmallow and covered in a chocolate flavoured coating. The biscuit itself is round to represent the wheel of a wagon (hence the name).

Wagon Wheels were created by Garry Weston, (son of W. Garfield Weston). Garry Weston worked for his father's business in Australia  before taking over his family's UK business. The biscuits were first launched at the 1948 Olympia Food Fair. The name was derived from the fact that the Wild West was very popular at the time. They were originally marketed as Weston Wagon Wheels.

Rotarians around the world also sport a wagon wheel design in their badge’s logo;

A wheel has been the symbol of Rotary since our earliest days. The first design was made by Chicago Rotarian Montague Bear, an engraver who drew a simple wagon wheel, with a few lines to show dust and motion. The wheel was said to illustrate "Civilization and Movement." Most of the early clubs had some form of wagon wheel on their publications and letterheads. Finally, in 1922, it was decided that all Rotary clubs should adopt a single design as the exclusive emblem of Rotarians. Thus, in 1923, the present gear wheel, with 24 cogs and six spokes was adopted by the "Rotary International Association." A group of engineers advised that the geared wheel was mechanically unsound and would not work without a "keyway" in the center of the gear to attach it to a power shaft. So, in 1923 the keyway was added and the design which we now know was formally adopted as the official Rotary International emblem. From http://www.icufr.org/abc/abc01.htm