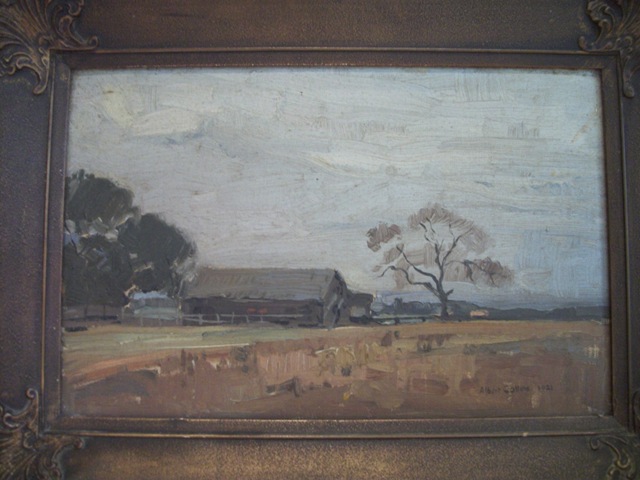 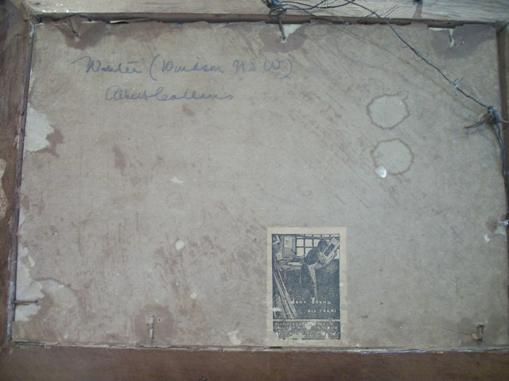 Report and Pictures A J Guesdon 2011.

Australian Landscape painters provide us not only with clear records of how all Australia once looked they also give us a means for holding and gazing at our heritage of art and creators. This Albert Collins landscape titled ‘Windsor’ NSW lay dusty in a corner of our home until the name prompted further investigation.

Albert E. Collins (1883–1951) was an Australian painter, teacher and actor born in New Zealand. After a successful career in painting and teaching he joined ABC radio, where he gave pleasure to a generation of children as "Joe" of the Children's Session and the main character in the long-running serial "Wide-awake Bunyip". Albert Collins was born in Aotearoa, New Zealand and in 1906 left to teach drawing at Abbotsleigh School for Girls in Wahroonga where he continued taking classes 1912. Among his students was Grace Cossington Smith.

He also taught at Redlands School, Cremorne from 1913–1916. The school yearbook reported that "Mr Collins class for design is fast becoming a popular one. There is evidently no lack of talent, and some of the work done shows great promise for the future." One notable student was Alison Rehfisch (née Green). He awarded a special prize to another student, Jean Sulman for designing a new cover for the school magazine which was used from 1915 to 1938. He was also on the teaching staff at Normanhurst, Meridien, Ascham, St Vincent's (and perhaps others) at various times.

Mr. Colins was an active member of the Society of Artists and hon. secretary in 1921. He was an invited foundation member of the Australian Watercolour Institute in 1923 along with Hans Heysen, Norman Lindsay, Blamire Young, Arthur Streeton, John D Moore, John Eldershaw and Sydney Long. His lithograph The world's loveliest harbour, Sydney, Australia is held at the National Gallery of Australia In 1929 he designed the Common Seal for the Ku-ring-gai Council. The Sydney Art Gallery purchased two of his works, The Tunnel and Broken Light.[14] Other work is held in the State galleries in Hobart and the Powerhouse Museum, Sydney. He illustrated Odd Jobs, a book of poems by Ernest "Kodak O'Ferrall, and with his daughter Kathleen, two children's books by H. S. Blake

Acting; He was a capable actor, starring in many productions of Gregan McMahon's Repertory Theatre Company and Doris Fitton's Independent Theatre, but never played professionally. He played Samuel Pepys in the Doris Fitton production of And So To Bed in 1931 (and learned to play the recorder passably for the part). Other plays for the Independent Theatre in which he had a major part included By Candle Light, The Middle Watch, The Young Idea, Petticoat Influence and Springtime for Henry. The Constant Nymph. As "Joe", he was co-presenter of the ABC Children's Session and Argonauts' Club from 1938 to 1951, from 1942 playing the title role in the Ruth Park series The Wide-Awake Bunyip, a popular feature of the program. Patti Crocker remembers him as a "a very funny man ... small round and vague". His ready wit did not come out "on air" however, so Ida Elizabeth Osbourne successfully rewrote his character as the butt of jokes from the rest of the cast.

Personal: He had been named for Prince Albert, Queen Victoria's consort but to everyone (including himself), he was "Joe". In 1910 he married (Agnes Emily) Beatrice Fullerton, principal of Claremont College in Randwick from 1902 to 1910 and previously assistant principal of Bethany High School, Balmain. She died in 1952. They had three daughters. Albert died in hospital of bronchiectasis while still working for the ABC. Children from Chatswood Primary School lined the streets as the funeral procession passed and his body was cremated. The Wide-Awake Bunyip series was terminated and re-started by Ruth Park as The Muddle-Headed Wombat with first Leonard Thiele then John Ewart in the title role and filling the vacancy in the Argonauts Club team.