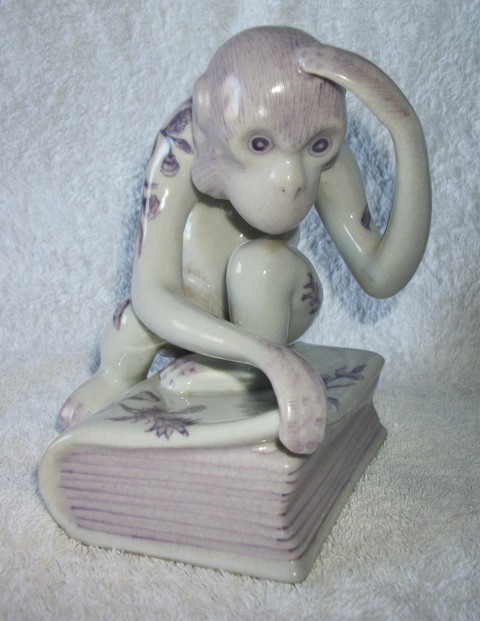 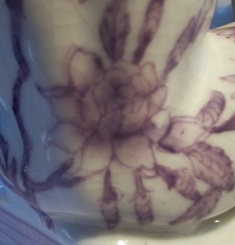 This week we examine a curious piece acquired simply because of its symbolism and positive emphasis. The mark on its base is, as far as we can tell, a modern one. It occurs in red, blue or black. Ours, in lavender, is not recorded anywhere although research shows that the colour purple, in Chinese culture, equates with spiritual awareness, physical and mental healing, hence strength, abundance; red purple brings luck and fame.

Some sources state the WL should be read as a "Wong Lee" or "Wah Lee" (WL) company with its residence in Hong Kong, although a search finds them based in Malaysia. Others have found recent products with this mark with a sticker saying "Made in China". Other are labelled "not for food" which dates the item to not older then around 1975.

The porcelain pieces are generally made in an old style, often with a crackled ground (crazing) and often with badly cast bronze (ormolu) fittings. On the foot rim is sometimes found two Chinese characters meaning "fang gu" or "imitating old (relic)" which belongs to the time after the Cultural Revolution that ended in 1975. The porcelain itself does not immediately look as from Jingdezhen while it remains possible. The enamel decoration appears similar to what some call Macao style. On the whole, the origin appears to be a commercial Chinese export, active from maybe the 1980s and onwards. Exactly where this porcelain is made remains unproven. 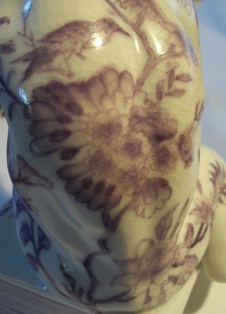 The clay is white and thick and the figurine quite heavy. We did find a similar monkey for sale, with this same mark, for $50.00. Larger WL1895 pieces are selling for around $200 and over. The flower designs are traditional symbols in Chinese culture and those represented on this piece are Hydrangea: A symbol expressing love, gratitude, and enlightenment – propitiating higher thought and reaching enlightenment. Narcissus: said to bestow the flowering of our hidden talents. Chrysanthemum - intellectual accomplishments, cleansing qualities, cure illnesses, longevity, considered to be the ‚'gentleman of flowers' (also symbol of autumn). Cherry fruit and blossom; The ancient Chinese regarded the fruit as a symbol of immortality and fruitfulness.

In Chinese culture the monkey is a sign of natural curiosity. A monkey scratching its head while opening a book symbolises, in this way, an aptitude to transcendence, or speaks of our own capabilities in a world filled with notions deemed beyond other creatures. Interestingly, monkeys reading books, apart from the ‘Shakespeare analogy’ have crept into our own culture as Darwin portrayed as a ‘thinking monkey’ to symbolise, positively, his Origin of the Species evolutionary content. Another famous monkey analogy;

The Scopes Trial, formally known as The State of Tennessee v. John Thomas Scopes and commonly referred to as the Scopes Monkey Trial, was a landmark American legal case in 1925 in which high school science teacher, John Scopes, was accused of violating Tennessee's Butler Act, which made it unlawful to teach evolution in any state-funded school.

Scopes was found guilty, but the verdict was overturned on a technicality and he went free. The trial drew intense national publicity, as national reporters flocked to the small town of Dayton, Tennessee, to cover the big-name lawyers representing each side.

This trial, stated by some to be ‘the greatest trial ever’ attracted worldwide attention and unprecedented coverage by journalists and media outlets. Life magazine adorned its masthead with monkeys reading books and proclaimed, "the whole matter is something to laugh about." (From Wikipedia 1.)

Ultimately porcelain markings, meant to be an indication of the era of each piece, should always be scrutinised and researched as you may not be getting what you’re paying for. The ‘WL 1895’ is a good example of this. Some sources state that the date '1895' was chosen in commemoration of the end of the war between Japan and China exactly 100 years before the Wong Lee Productions Co, to whom these creations are credited, was founded, not as an indication of earlier or antique wares. 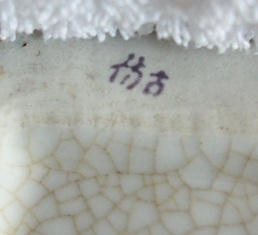 Having some knowledge of Chinese characters helps. Those near the rim, two Chinese characters ‘Fang gu’, meaning ‘imitating old/relic’, clearly points to no attempt at faking it. Chinese potters have a long tradition of borrowing design and decorative features from earlier wares, especially the use of symbolism in decorative features to tell a story without words. Whilst ceramics with features thus borrowed might sometimes pose problems of provenance, they would not generally be regarded as either reproductions or fakes. Either way, this little fellow, at least 32 years old, reminds all here that we are curious creatures constantly seeking enlightenment.