The artefact shown here was purchased in the mid ‘70’s, along with a spear, thrown into the bush and not retrieved, for its beauty. Collecting aboriginal artefacts, whether hunting weapons, paddles or the beautiful woven bags used to carry food in, has become increasingly popular for the history imbued in them, the skill shown in making them, for the various kinds which indicate which part of Australia they derive from, and for the art some have which indicates totems as much as the skill of the creators. 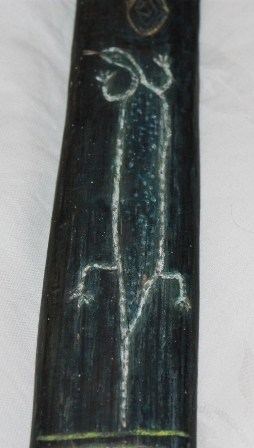 A woomera is a wooden Australian Aboriginal spear-throwing device. Similar to an atlatl, it is an extension of the human arm that enables a spear to travel at a greater speed and force than possible with the unaided arm. Records show that the implement began to be used about 5000 years ago but it may have been in use long before that when considering indigenous occupation of Gwondwana stems back at least 40, 000 years. They are still used today in some remote areas of Australia. Like spears and boomerangs, woomeras were traditionally used only by men.

Some woomeras, especially those used in the central and western Australian deserts, were multi-purpose tools. Often shaped like long narrow bowls, they could be used for carrying water-soaked vegetable matter (which would not spill and could later be sucked for its moisture) as well as small food items such as little lizards or seeds. Many woomeras had a sharp stone cutting edge attached to the end of the handle with black gum from the triodia plant. This sharp tool had many uses, such as cutting up game or other food and wood. The woomera could be used as a shield for protection against spears and boomerangs. The extra energy gained from the woomera's use has been calculated as four times that from a compound bow. (1.)

Some sources state the origin of  WOOMERA stems from the Dharuk (Australian aboriginal language of the Port Jackson area) word ‘wamara’. Each region has a variation of this spelling when translated into English. The words first known use as part of the English language was in 1817

The tools and implements of Australian aboriginals pertain to the needs and locations of each group and are made from what is on hand and part of everyday life. As an example, coastal tribes used fishbone to tip their weapons, whereas desert tribes used stone tips. Although tools vary in this way all had implements such as knives, scrapers, axe-heads, spears, various vessels for eating and drinking, and digging sticks.

Aboriginal people achieved two world firsts with stone technology. They were the first to introduce ground edges on cutting tools and to grind seed. They used stone tools for many things including: to make other tools, to get and prepare food, to chop wood, and to prepare animal skins. Stone fish traps are used in rivers where water levels rise and fall. Stone fish traps on the Darling River at Brewarrina are used to catch fish after rain. Retrieved from: http://australia.gov.au/about-australia/australian-story/austn-indigenous-tools-and-technology

Collectors term the various kinds of woomeras ‘tribal Art’ and a lot of these exchange hands, the older, with established provenance or place of origin are more expensive. Some our now made specifically for this market and beautifully decorated by celebrated indigenous artists; these too cost more. Prices begin from an average of $350.00 upwards.