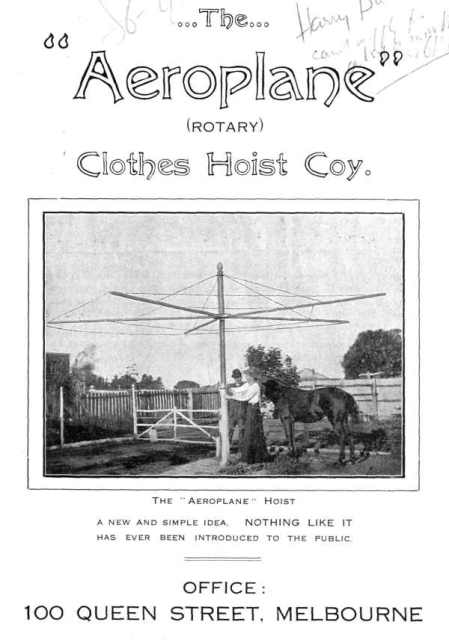 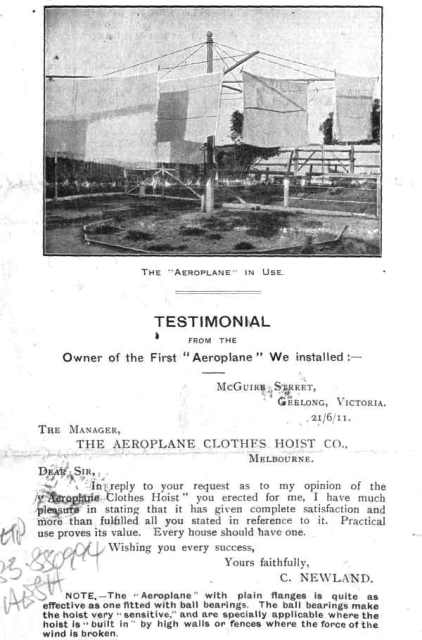 After days and days of rain dreaming of getting the washing dry can acquire a bit of longing amongst its practicality. One staffer, who won’t use the backyard line as ticks from the spotted gums above, as well as gum resin itself, ends up on the cloth and then the residents, ties lengths of rope between veranda posts and hangs all out to dry there. This is called ‘setting the house to sail’, and as the premises is on a hill, amongst blue (?!) skies, the sense of the house being at sail when warm winds are blowing and all ropes crammed with white sheets becomes a truism.

To chant up some clothes drying weather we focus on the great Australian Hill’s Hoist this week as our more traditional ‘sailing’ or clothes drying method; and nod to its added bonus of being a playground of naughty children who love to swing around and round when mum’s not looking. 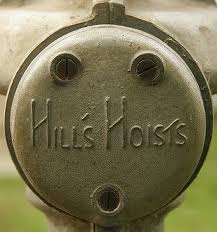 A Hills Hoist is a height-adjustable rotary clothes line, manufactured in Adelaide, South Australia by Lance Hill (1902-1986) since 1945. The Hills Hoist and similar rotary clothes hoists remain a common fixture in many backyards in Australia and New Zealand. They are considered one of Australia's most recognisable icons, and are used frequently by artists as a metaphor for Australian suburbia in the 1950s and 60s. Although originally a product name, the term "Hills Hoist" became synonymous with rotary clothes hoists in general, throughout Australia.

As early as 1895 Colin Stewart and Allan Harley of Sun Foundry in Adelaide applied for a patent for an ‘Improved Rotary and Tilting Clothes Drying Rack’. In their design the upper clothes line frame tilted to allow access to the hanging lines. Gilbert Toyne of Geelong patented four rotary clothes hoists designs between 1911 and 1946. Toyne’s first patented clothes hoist was sold though the Aeroplane Clothes Hoist Company established in 1911. It was Toyne’s 1925 all-metal model (Australian Patent No. 24553/25) with its enclosed crown wheel-and-pinion winding mechanism that defined clothes hoist designs for decades to follow. Lance Hill began to manufacture the Hills rotary clothes hoist in his backyard in 1945. His wife apparently wanted an inexpensive replacement to the line and prop she had for drying clothes.

Lance Hill's brother-in-law Harold Ling returned from the war and joined him to form a partnership in 1946. Ling became the key figure in expanding the production and marketing of the Hills Hoists. In 1947 Hills Hoists began manufacturing a wind-up clothes hoist which was identical to Gilbert Toyne’s expired 1925 patent with the crown wheel-and-pinion winding mechanism. Initially the clothes hoists were constructed and sold from Lance Hill’s home on Bevington Road, Glenunga. Soon production moved to a nearby site on Glen Osmond Road and within a decade the factory had relocated to a larger site at Edwardstown. The company Hills Hoists became Hills Industries in 1958.
From: Hills Hoist. (2012, January 29). In Wikipedia, The Free Encyclopedia. Retrieved from http://en.wikipedia.org/w/index.php?title=Hills_Hoist&oldid=473945300