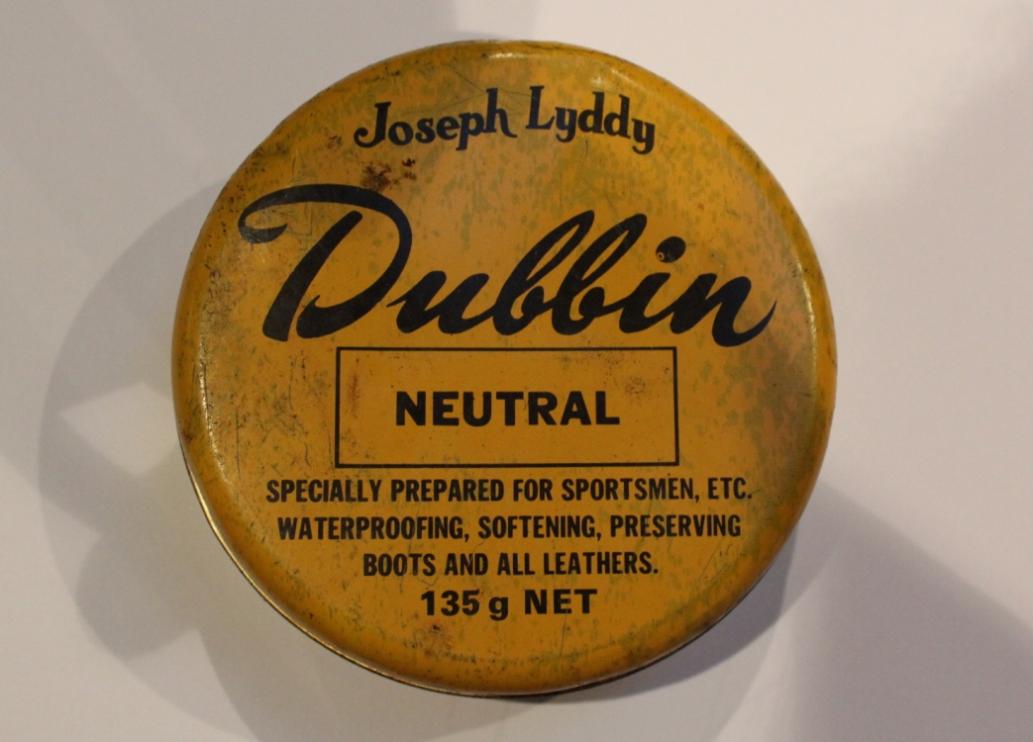 School holidays mean you don’t have to polish your school shoes for a few weeks. Spring means you may need to polish your hiking boots, though. Tucked into the pair that will go hiking from here is this tin of Jospeh Lyddy Dubbin, and like the boots, this is a product that has been around for a while now. In fact you can't purchase this size tin of 'Dubbin' today - it's 125 grams instead.
Dubbin is a wax product used to soften, condition and waterproof leather and other materials. It consists of natural wax, oil and tallow. You can make your own with a recipe consisting of beeswax, fish oil and lard and can also include mink oil. It is different from shoe polish, which is used to impart shine and colour to leather. Dubbin has been used since medieval times to waterproof and soften leather boots. The name dubbin is a contraction of thegerund dubbing, describing the action of applying the wax to leather.
Joseph Lyddy(sometimes spelled ‘Liddy’) was an Irish son who arrived on the ship Emerald Isle, 537 tons, Captain G. Pellatt, from Plymouth 11th October 1853, at Port Adelaide, South Australia on the 16th January 1854 when he was 10 years old. His family was escaping the famine that claimed so many Irish lives:
Liddy John 39 Farm Servant - D/M Clare
Mary         37
Owen        20         with parents
Biddy Bridget 18         with parents
Elizabeth 16         with parents
Margaret         14         with parents
John         12
Joseph         10
Mary           6
Anne           3
His work in life was a bootmaker when this was a trade which required careful teaching - something he claimed, when younger, he was not receiving:
Joseph Lyddy appeared to the information of Alexander Stevens for absenting himself from his service without leave, and before the term of con-tract had expired. Mr. Way appeared for the prosecutor, and Mr. Ingleby for the defendant. It appeared that the prosecutor was a bootmaker, and the defendant was one of his apprentices. The prosecutor stated that he had instructed the defendant in the trade; and he had improved since he had been with him. He left without his (prosecutor's) permission. The defence was that the defendant left because he was not properly instructed by the prosecutor in the trade. The Bench ordered the defendant back to his work and to pay the costs of the information. POLICE COURTS. (1864, April 9).Adelaide Observer (SA : 1843 - 1904), p. 3. Retrieved from http://nla.gov.au/nla.news-article159523615
In 1880 he married Mary Anne Sullivan and soon after set up in business for himself with a partner - his boots were so good they won prizes:
Work in Leather: Harness, Saddles, Bridles, Boots and Shoes.—Collection of boots and shoes
One entry : Joseph Lyddy. c m —" Well worthy of the highest prize offered; all well got up, and a credit to the manufacturer." GRAND INDUSTRIAL EXHIBITION. (1884, May 23). The Express and Telegraph (Adelaide, SA : 1867 - 1922), p. 4 (HALF-PAST ONE O'CLOCK EDITION.). Retrieved fromhttp://nla.gov.au/nla.news-article208276563
Mr. Joseph Lyddy shows a very fine sample of boots and shoes manufactured by him in every style. Articles in leather and saddlery are well illustrated.The Industrial Exhibition. (1884, May 30).Christian Colonist (SA : 1878 - 1894), p. 2. Retrieved from http://nla.gov.au/nla.news-article214690039 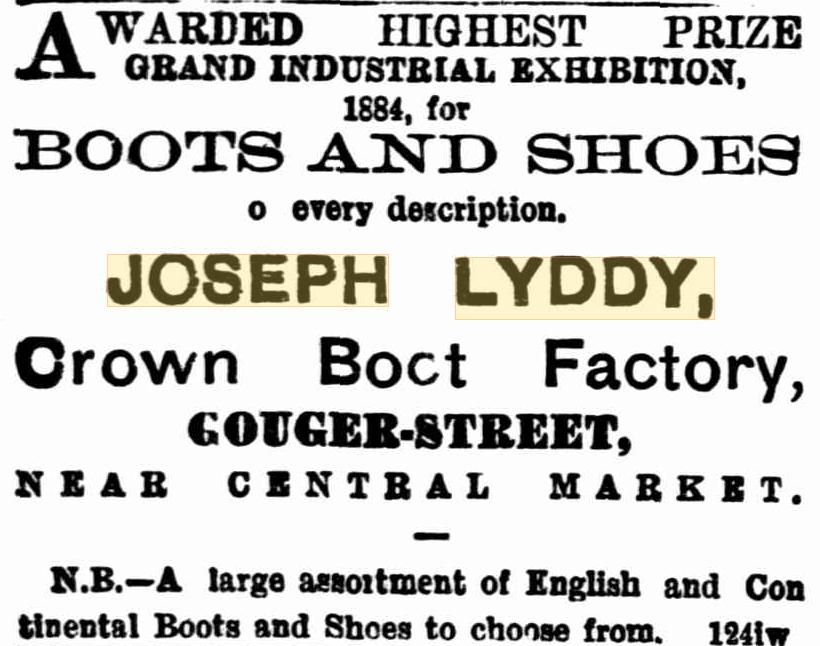 Advertising (1884, July 9). The Express and Telegraph (Adelaide, SA : 1867 - 1922), p. 4 (HALF-PAST ONE O'CLOCK EDITION.). Retrieved fromhttp://nla.gov.au/nla.news-article208278878
Another large wholesale bootmaking establishment has recently been opened-In Leigh street by Messrs. Lyddy & Radcliffe. The premises were formerly occupied by the Union boot factory, from whom the business has been purchased, and will now be conducted on a much more extensive scale. Sixty hands are employed in manufacturing, forty-five men and boys and fifteen girls, the latter being engaged on the ornamental and lighter portion of the work. Messrs. Lyddy & Radcliffe do a large import trade, but their speciality is the making of colonial boots and shoes, andespecially in those superior lines which are now hugely undertaken in the colonies. In ladies' and children's boots, especially in the more ornamental styles, the firm has produced articles which appear quite equal in finish to the corresponding imported chaussure, while in  price the difference is' very small. The establishment is a large one, and is fitted, with all the appliances necessary to carrying on a business of this description advantageously.
The grindery department is on the under ground floor, and is well-stocked, while along side is a storeroom, which will contain the bulk of the English and foreign importations. On the first floor is the factory, where the newest mechanical appliances—including a Blake's sole-sewing machine—are used. Messrs. Liddy &. Radcliffe were the recipient of a certificate of merit for ornamental leather work shown by them at last year's exhibition in Adelaide.GENERAL NEWS. (1885, February 26).The Express and Telegraph (Adelaide, SA : 1867 - 1922), p. 2 (Afternoon Edition.). Retrieved fromhttp://nla.gov.au/nla.news-article208343221
ASSIGNMENT.
Joseph Lyddy and Ernest Radcliffe, trading as Lyddy & Radcliffe, Leigh-street, Adelaide, merchants. ASSIGNMENT. (1888, February 22).Evening Journal (Adelaide, SA : 1869 - 1912), p. 2 (SECOND EDITION). Retrieved from http://nla.gov.au/nla.news-article204445613 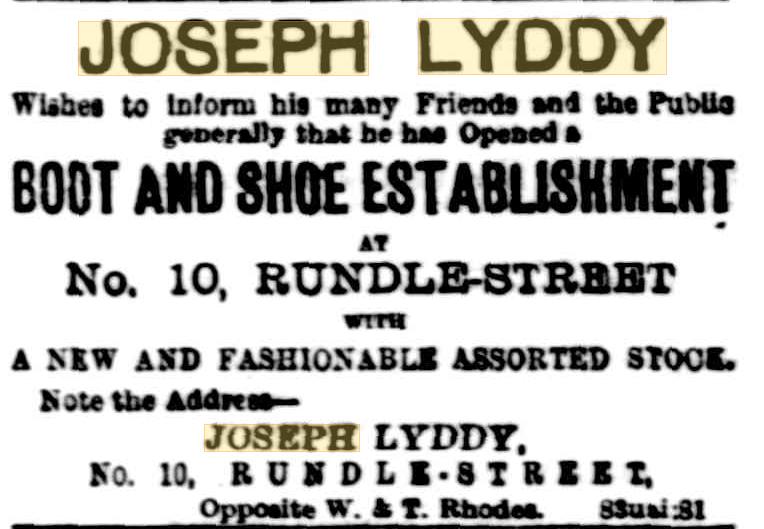 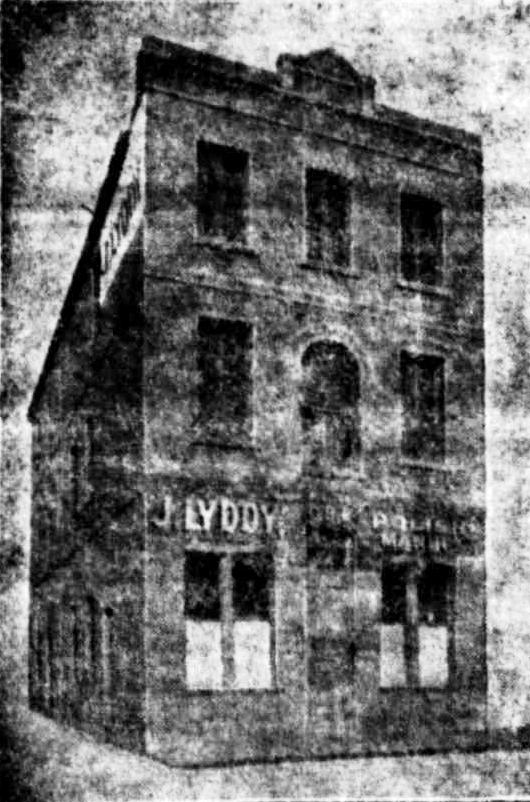 GENERAL NEWS
INSPECTION OF GLENELG.
The annual inspection of Glenelg by the local Town Council took place on Wednesday. The Mayor (Mr. H. W. Varley) was unavoidabîv absent. Shortly after 2 p.m. the party left in a drag for New Glenelg, where several works of a necessary nature were passed. St. Leonards was next visited and the site Of the new rooms on Albert terrace and Kent and Pierce streets were inspected, and it was decided that all the work should be carried out. Many other parts of the city were visited, and some of the works were decided upon, while others were deferred until the next meeting of the conned. Mr. J. Lyddy's tanolin factory was also called at, and the party were shown through the premises by the proprietor. A factory for the manufacture of flock, also carried on by Mr. Lyddy, was then inspected. These works have only been in existence for about nine months, and much interest was displayed in them by the visitors. Favorable criticism was passed upon the quality of the flock, and also the efficient way in which the works were conducted. Most of the flock is disposed of in Adelaide,. The establishment employs about a dozen bands. .. GENERAL NEWS (1909, January 28). The Advertiser(Adelaide, SA : 1889 - 1931), p. 9. Retrieved fromhttp://nla.gov.au/nla.news-article5167390
Picture at right from:
LYDDY'S O.B.B. POLISHES for Harness, Boots and Shoes, and All Kinds of Leather. There are none better. Factory: 76-78 King William Street. Fitzroy. Telephone 9257. A Nice Investment (1917, July 5). Tribune(Melbourne, Vic. : 1914 - 1918), p. 7. Retrieved fromhttp://nla.gov.au/nla.news-article154372399 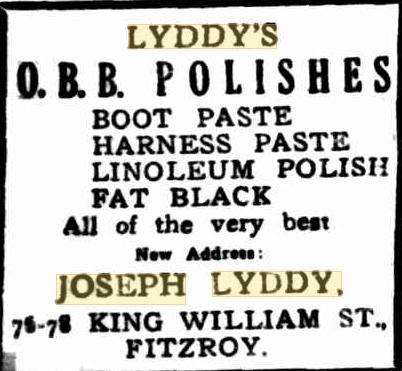 Advertising (1918, July 4). Tribune (Melbourne, Vic. : 1914 - 1918), p. 4. Retrieved from http://nla.gov.au/nla.news-article154661814
O.B.B. stands for Lyddy's trade slogan 'Oily Black and Brilliant.' - something which had to be defended by the gentleman who bought Mr. Lyddy's business and products and the right to use an already long-established name on his retirement:

Advertising (1924, April 19). Weekly Times (Melbourne, Vic. : 1869 - 1954), p. 31. Retrieved from http://nla.gov.au/nla.news-article222807848
TRADE MARK INFRINGED.
MANUFACTURERS AT LAW.
Injunction Granted.
Reserved judgment was given by Mr. Justice Schutt in the Practice Court yesterday in a case in which Joseph Charles Day, trading as Joseph Lyddy, of Little Bourke street, Melbourne, manufacturer, claimed from Thomas Mitchell Pty. Ltd., of Lonsdale street, Melbourne, merchants, an injunction to restrain the defendant from an alleged infringement of a trade mark.
The plaintiff claimed he was the registered proprietor of a trademark consisting of the words ‘Lyddy’ and the letters “O.B.B.”. for many years he had used the trademark in connection with the manufacture of harness and other polishes. He alleged that in 1922 the defendants began putting up polish in tins of the same size, shape and colour and general design as his with the letters “T.M.B.”.
He contended that this was an infringement of his trademark and a “colourable imitation”. Plaintiff asked for accounts showing the profits derived from the defendants of their polish.
Defendants contended that they were entitled to put up their goods in tins of the same shape and size common for the trade. The contended that there had been no infringement of the trademark and that there had been no likelihood of deception.
Mr Justice Shutt, in his judgement, said that during a period of 13 years plaintiff’s harness paste had apparently garnered a good reputation. There was a marked resemblance between the tins and the letters “O.B.B.” and “T.M.B.” were of similar size. The plaintiff had complained in August 1922 but had received no reply, and the writ was issued in April 1923.
The question to be determined was whether the “get up” of the defendants goods sufficiently resembled the plaintiffs goods. The defendants were not debarred from using tins of a similar size, shape and colour but in this case the defendants were under an obligation to make some distinction. Instead of doing this, they had, he thought, added to the general resemblance, and it was reasonable to suppose that the letters had been placed on the defendants tins in the hope of causing confusion. Plaintiff was therefore entitled to an injunction restraining defendants from offering their polish for sale in tins done up to resemble plaintiff’s goods. No order would be made regarding the application for accounts in connection with the defendant’s product.TRADE MARK INFRINGED. (1924, July 23). The Argus (Melbourne, Vic. : 1848 - 1957), p. 17. Retrieved from http://nla.gov.au/nla.news-article4254818
OBB Polish

For 30 Years Lyddy's Boot Polishes have been recognised as most dependable, O.B.B. is unequalled for the preservation of Boots, Leggings, etc., and gives a brilliant shine. From all Stores. Advertising (1927, July 23). Weekly Times (Melbourne, Vic. : 1869 - 1954), p. 19. Retrieved fromhttp://nla.gov.au/nla.news-article222820949
In 1965, Waproo acquired Joseph Lyddy Horse Care products. They still manufacture and sell these alongside their own tried and true Australian leathercare products.
Recently, the brand launched a range of products specially branded for Black Caviar, the Australian thoroughbred racehorse with a success record unsurpassed for more than 150 years.
Visit: https://www.josephlyddy.com.au/
Time to polish up those hiking boots - make sure they're waterproof for all the Spring rains they'll tramp through! 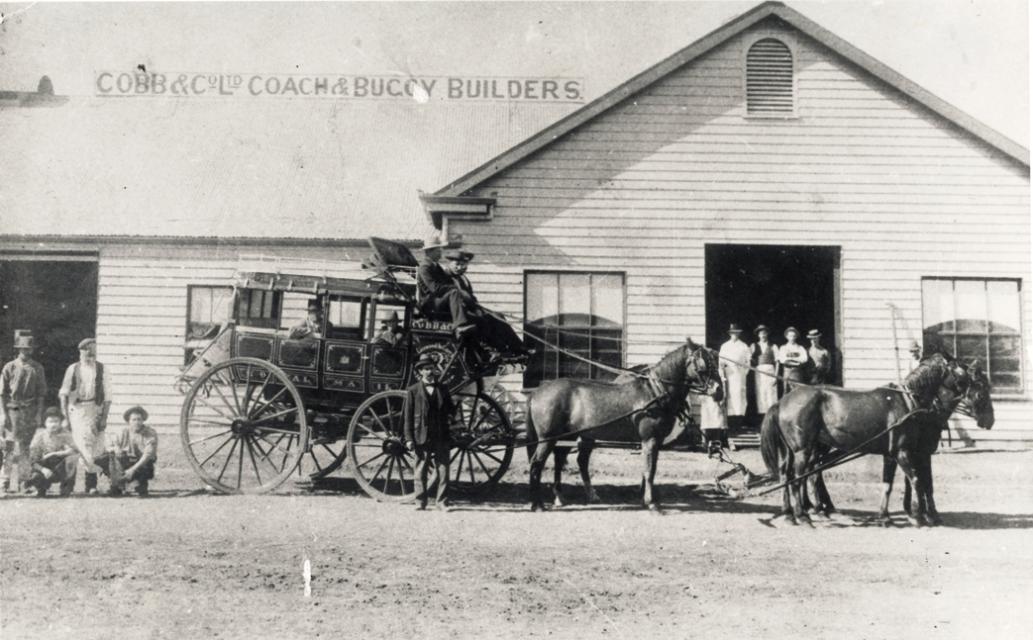 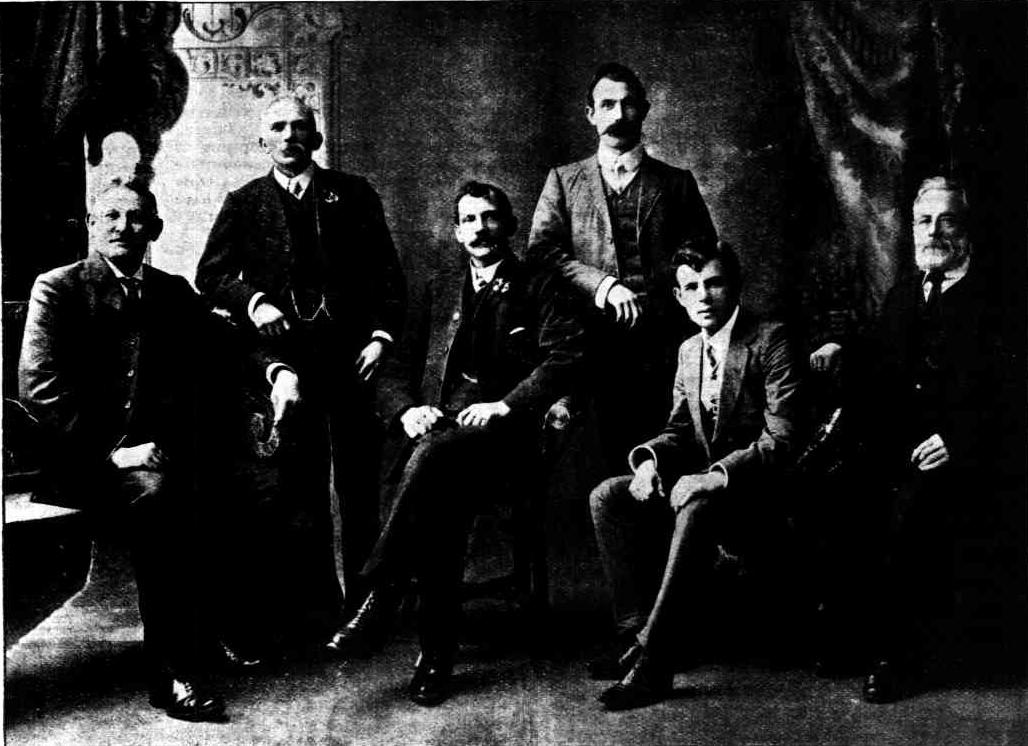