Make your own Summer Fun 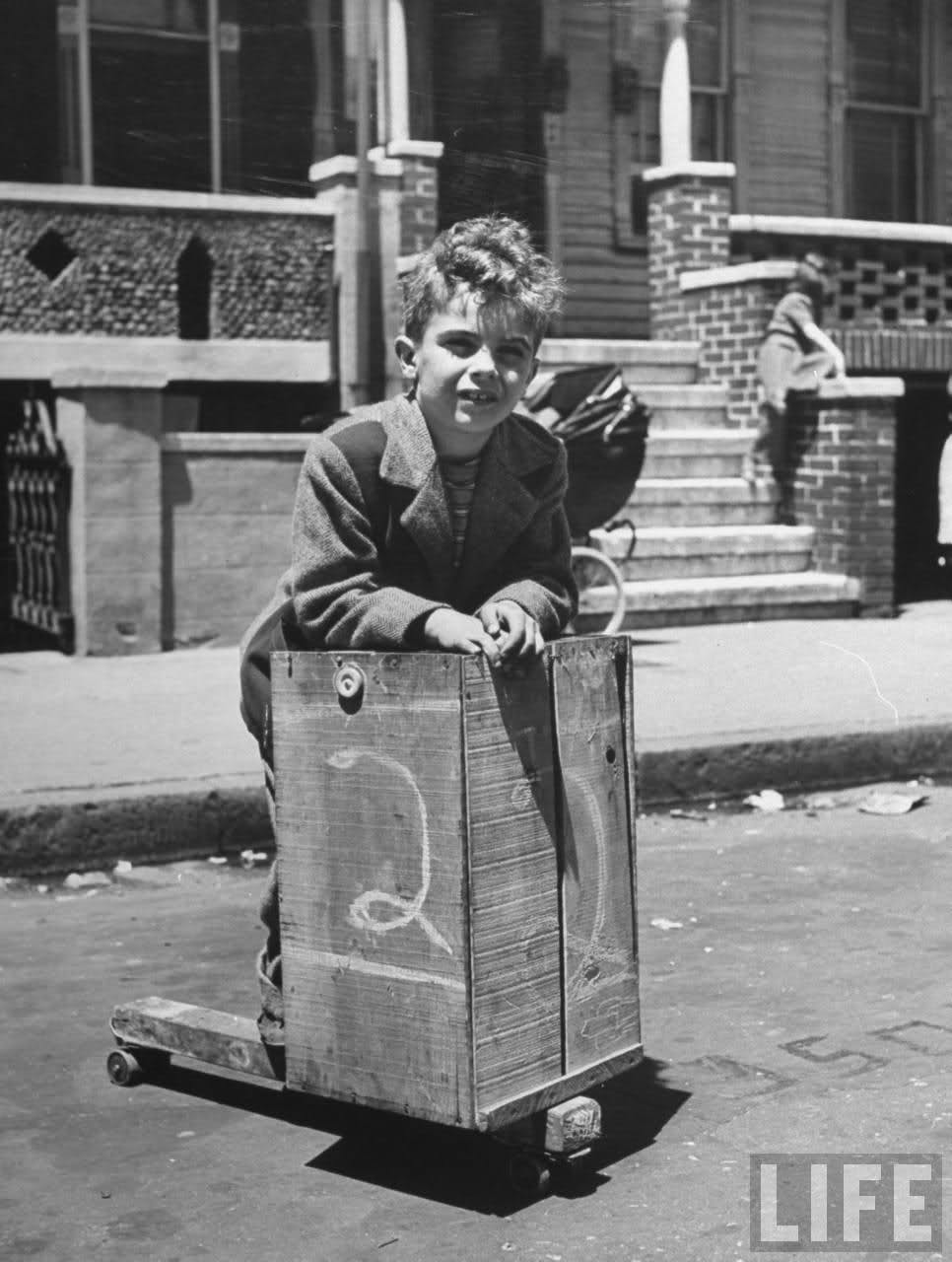 Scootering and Skateboarding: Make your own Summer Fun 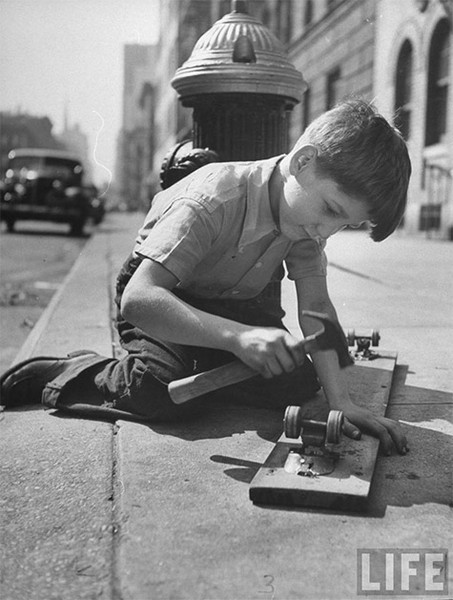 Before we return to some making your own garden furniture ideas, or doing some jobs around the home, like replacing hollow doors with solid core doors to ‘install’ some quiet in the home, we’d like to share one that’s just for fun and something that can give hours of fun too.
If your first way of zipping around on wheels was a tricycle or skateboard then this predecessor of those may give you a small insight into how simple ideas are also great ideas.

The first vehicle of many a young person is a scooter – the 1969 version of the “King of the Road’ with white tyres and pale blue chrome certainly whizzed  over cement and tar smoothly is well remembered here – the breeze in your hair, brothers left in your wake – much faster than walking on hot summer days.

Although there are many small zippy versions used today, in competitions and for fun, we’d like to offer some basics for those who like something more traditional, that they can make!

For those who wonder what a skateboard looked like before some bright spark decided to remove the upright handle of a scooter and go ‘sidewalk surfing’ as it was known in some parts of California when bored surfers, with no surf to surf, came up with a way to ‘surf’ and were following an idea that had first been seen by Americans  in France in the early 1940’s, when the wonderful fruit crate, a plank of wood and some roller skate wheels were adapted, this is where today's fun came from.

After a few tests versions, or adjusting just one model, you may find you prefer something you've made and adapted to your own scooting wants better than something already made - with this version you can also shape the design of the wood, paint it all different colours  or stain it with some decking finish or oils and create an original - just like you!

There are lots of paints and decking stains on special at Johnson Brothers Mitre 10 at present, like those used in the murals around Avalon Beach for the recent Avalon Art Festival - just call into one of their stores and talk to their trained friendly staff about what is best for all the wood and paints you will need.

Definition of ‘scoot’; to move swiftly, Mid 18th century: of unknown origin, possibly from ‘scout’, of 'Scooter'; a child's toy consisting of a footboard mounted on two wheels and a long steering handle, propelled by resting one foot on the footboard and pushing the other against the ground. 1800-10; scoot + -er

Some 'historical' background for you from when this popular pastime began to be reported here in Australia: 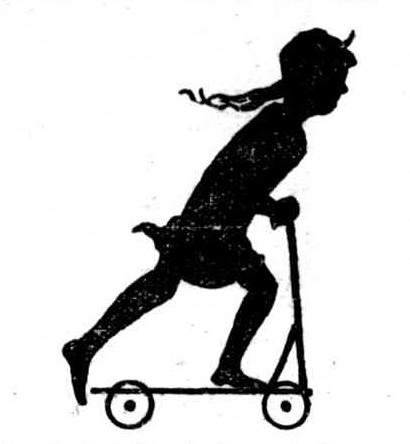 MY SCOOTER.
You should see me on my scooter!..
You should hear me sound my hooter! - -
You should see the people- flying 'from my track!
Down the hill the rush is splendid^
But when the- slope, is ended
I've all the way to push the scooter back!
Mother says there is no ending
To the shoes I'm needing mending,
And that scooters are such very-'spensive toys.
Daddy says I’ll earn more money,- '
For we can't stop little sonny
Scooting up and down like all the other  boys.'
Oh, I am a lucky laddie
To belong. to such a Daddy! -
There's no one has a Father just like me !
And as-for little Mother,
Well, 'there isn't such' another.
I am sorry for the other boys  you see.
— C. E. Thonger
MY SCOOTER. (1928, March 21). The Northern Herald (Cairns, Qld. : 1913 - 1939), p. 36. Retrieved from http://nla.gov.au/nla.news-article149600963

The N.R.M.A. recently brought before the notice of the Police Department the menace to motorists and to the children themselves, by the presence of scooter parties on many of the heavy-traffic road Way, around Sydney. The Association's effort In having the nuisance and danger reduced to a minimum has been endorsed by the North Sydney Council. The Acting Mayor of which (Alderman  E. M.  Clark) has prepared special minute on the subject for transmission to the Inspector General of Police. Scooter Nuisance. (1926, November 5). The Cumberland Argus and Fruitgrowers Advocate (Parramatta, NSW : 1888 - 1950), p. 18. Retrieved from http://nla.gov.au/nla.news-article104950567 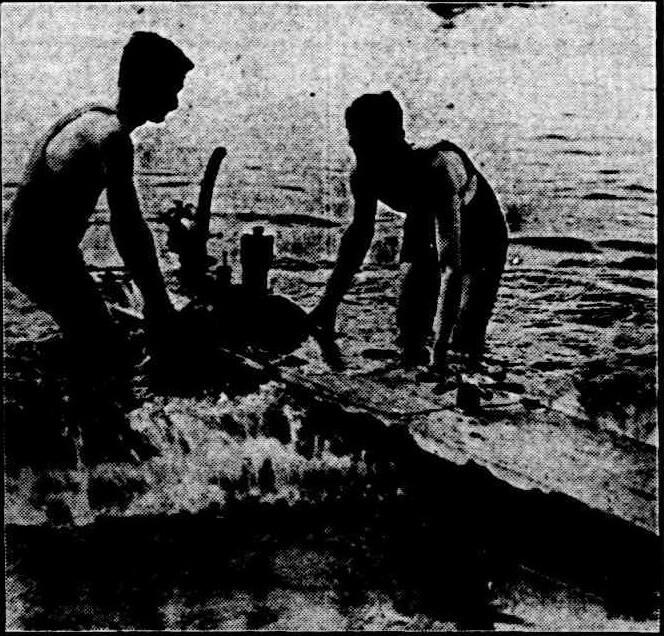 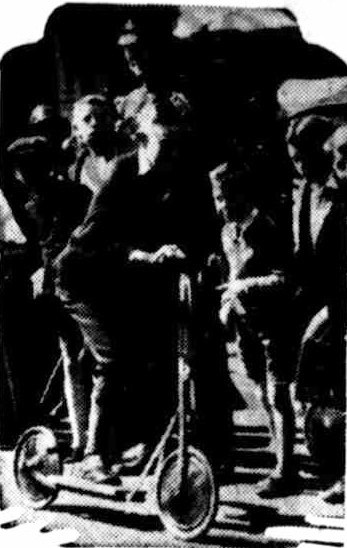 The trend of seasonal games amongst boys has once again brought the scooter into prominence. During the next five or six weeks boys will be seen in ever increasing numbers in every suburb, gaily riding their scooters wherever a slight decline In the road can be found, quite regardless of the danger from traffic.

How to do it: Two Versions

An Original "Scooter"
Every boy is 'familiar with the ordinary kind of scooter, which is propelled by "one -foot" power, but how many have seen the one illustrated in the accompanying sketches. 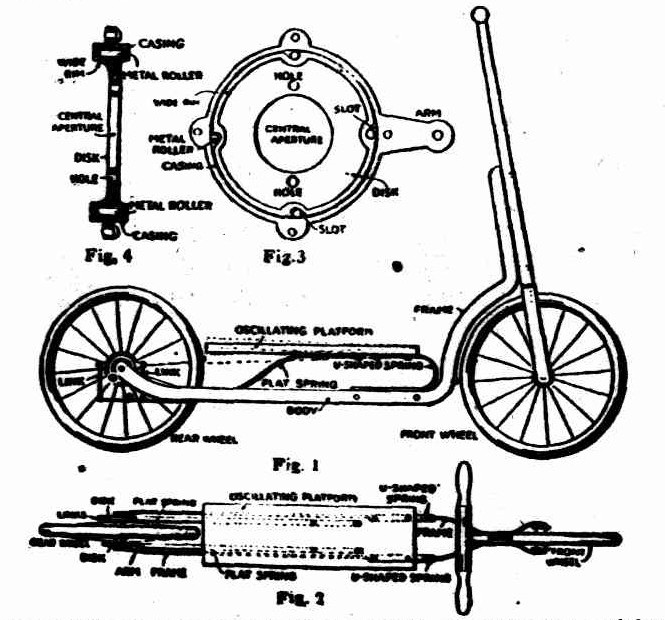 It has been called the weight mobile, because the driver’s weight exerted on a platform attached to springs is the sole method of propulsion. With one of these scooters a boy may have a great deal of fun, and he may, too, secure a lot of healthy exercise. An ingenious boy may convert an ordinary scooter into a weight mobile, for the handle, body and wheels are the same as those ordinarily used.
The additions required are to provide the hub of the rear wheel with one of the discs at each end of the hub. The disc of Figs. 3 and 4 consists of a central aperture which permits it to be placed over the end of the hub, to which it is secured by bolts through holes. The perimeter of the disc has a wide rim into which are cut four cross-grooves or slots, each of which is provided with a metal roller (see Fig. .4).Mounted on the frame in Figs. 1 and 2 is an oscillating platform. This is secured to the frame by means of two U-shaped springs, -enabling its rear end to move up and down a limited- distance:
A pair of flat springs is secured to the lower side of the platform, and their rear ends project back to points directly above, the arms of the respective discs on the rear hub. The arm of one disc projects to the front, whilst the arm of the other points to the rear. Links between the ends of the tint springs and the two disc-arms -provide' a means for 1 !imparting the oscillating motion of the \ platform to the arms of the discs. The tendency of' bouncing up and down produces an motion which is applied to the discs in such a manner that the vehicle is propelled whether the |platform moves up or down. The discs and the springs can be made by any blacksmith or engineering workshop, and any boy with a mechanical turn of mind should be able to put the scooter together.  An Original "Scooter.". (1930, January 3). The Age (Melbourne, Vic. : 1854 - 1954), p. 2 Supplement: SUPPLEMENT. Retrieved from http://nla.gov.au/nla.news-article203100039
Feet to Centimetres conversion for Scooter below
1/4 Inch = 0.635 cm
Five-eighths of an inch + 1.5875cm
2 inches = 5.08 cm
2 ½ inches = 6.35 cm
3 ½ inches = 8.89 cm
3 ¾ inch = 9.525 cm
4 inches = 10.16 cm
4 ½ inches = 11.43cm
5 ½ inches = 13.97 cm
6 inches = 15.24
8 inches = 20.32 cm
12 inches = 30.48 cm
21 inches = 53.34 cm
24 inches = 60.96 cm

"REQUEST" SCOOTER.
This week, by special request, I am giving instructions for making a strong scooter. Hardwood, such as beech or oak, should be used throughout. 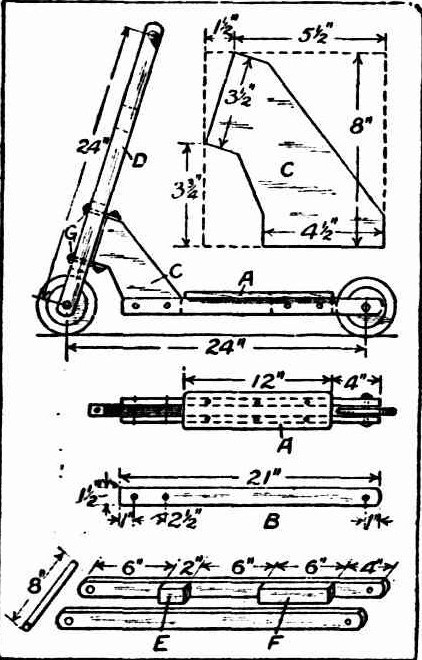 Cut the footboard, A, which is three inches, wide, from a piece of wood half an inch thick, and screw it to two horizontal pieces five-eighths of an inch thick, cut to the sizes given in diagram B. Round one .end of each, as shown, and bore the three holes to take three-eighth inch bolts. Leave a space one inch wide between the horizontal pieces when screwing on the footboard. Cut the front part, C, to the shape and size given in the top right hand diagram, from a piece of wood one inch thick. When this has been cut to shape, fix it in position between the front ends of the horizontal parts with two three-eighths inch bolts.
Now make the steering post, D. Two pieces of one and a half inches by five-eighth inch wood, "24 inches long, will be required. Through one end of each piece bore a 3in. hole to take the handle, and through the other ends bore three-eighths inch holes for the front wheel axle. Two blocks of wood, E and F, each one inch thick, must be screwed or bolted between the sides of the steering post, in the positions indicated.
For the handle, use a piece of ¾ in. dowel rod, eight' inches long. Push this through the holes in the top ends of the steeling post and fix with two screws. The steering post is pivoted to the front part.. C, by means of two – ¼ in. eye-bolts, three inches long. The bolts should be screwed through holes made in part F, and then clamped with nuts, as shown at G.
The centres of the holes for these bolts must be 3in. apart, so that the eyes of the bolts, when screwed in place, just allow the front part of the piece C to slip between. Each-eye-bolt is pivoted in place with a stout round-headed screw and a thick washer, as indicated in the .first diagram. Now obtain a pair, of hardwood scooter wheels, five inches in diameter, from a toy shop, and fix them in place with three-eighths inch, bolts, which can be pushed through' the holes made to receive them in, the ends of the steering post and behind the footboard. Give the finished scooter a good rub with glasspaper, then apply two coat of varnish stain.
You can easily make a scooter like this from any hardwood. "REQUEST" SCOOTER. (1936, October 15). Daily Examiner(Grafton, NSW : 1915 - 1954), p. 8. Retrieved from http://nla.gov.au/nla.news-article193597730
And a few last Historical Notes 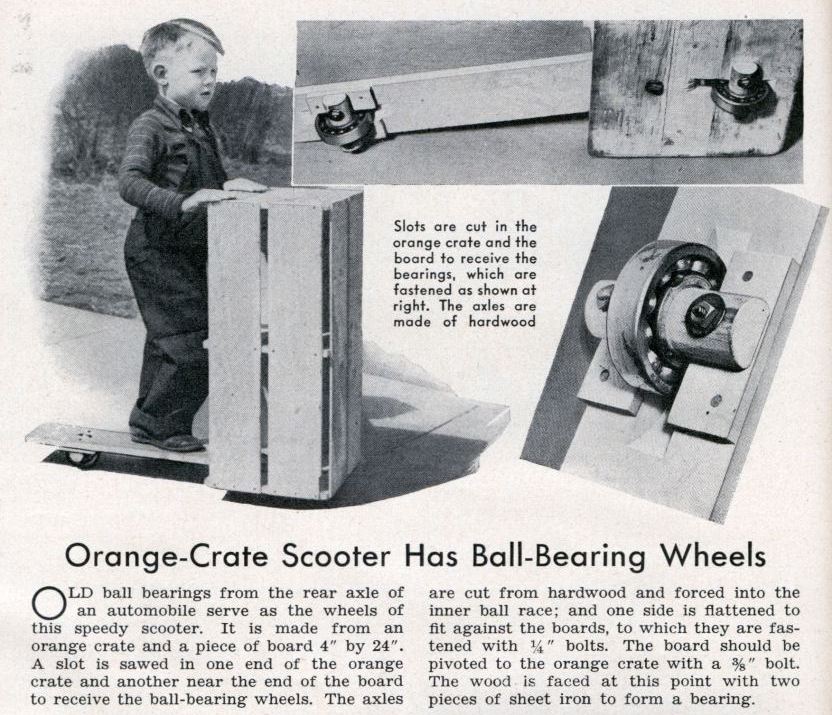 LAST Christmas probably 90 per cent, of the? boys in the Commonwealth, of an age to use them, were given scooters, and a sort of scooter orgy has followed, which has resulted in the promotion of races in which elders have participated. About fifteen years ago a serious attempt was made to introduce motor scooters for the use of business men. The form of the scooter was similar to those which give such delight to boys, only they were larger and had a small motor and pneumatic-tyred wheels. The agents who introduced these scooters deluxe advocated that they would enable men to scoot about their work with speed and comfort. In America they had a slight vogue, but it failed to extend to Australia. The few that were for a time driven about the Sydney streets were probably only used by the salesmen who were trying to find a market. — H.M. A SURVEY & SOME OPINIONS. (1936, August 26). Sydney Mail(NSW : 1912 - 1938), p. 6. Retrieved from http://nla.gov.au/nla.news-article160634514
Speedsters On A Scooter 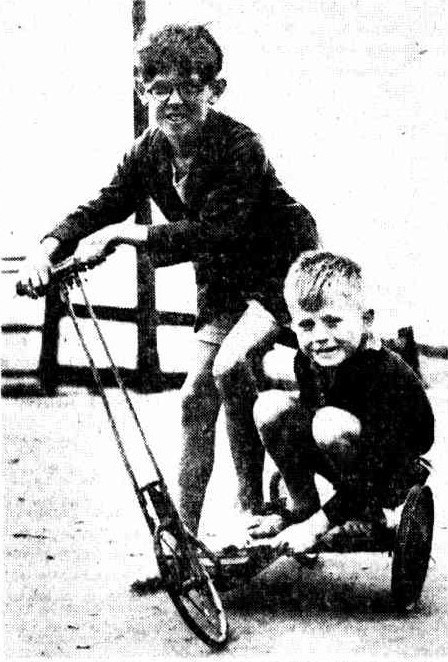 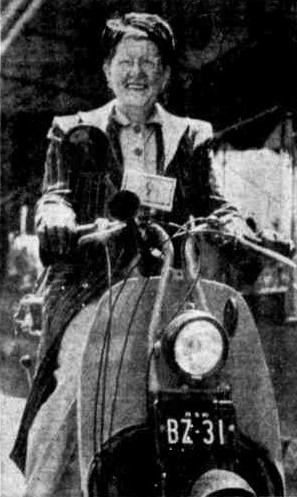 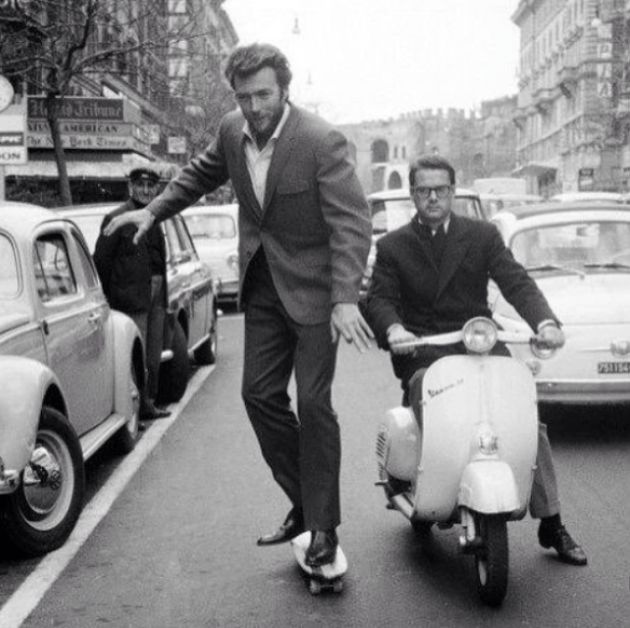 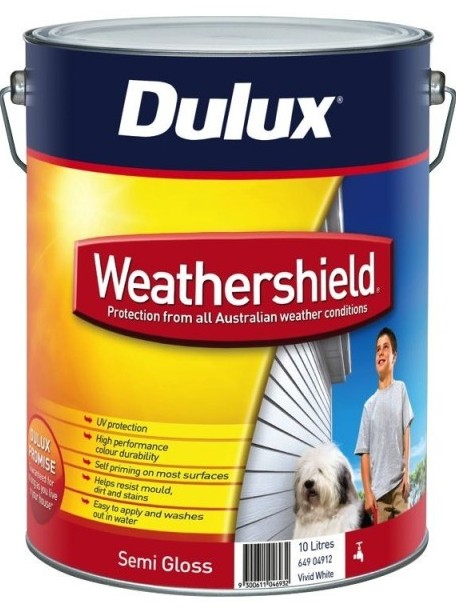 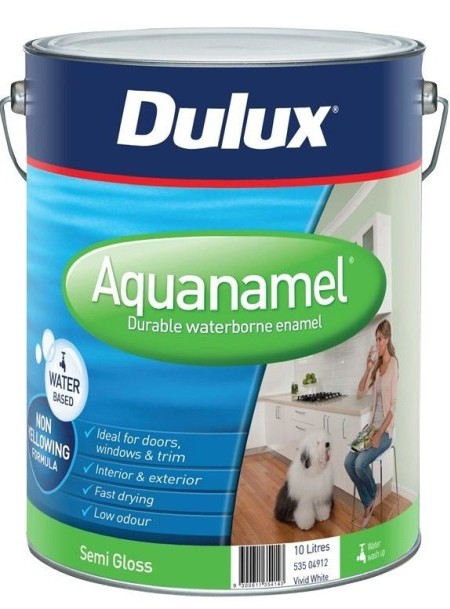 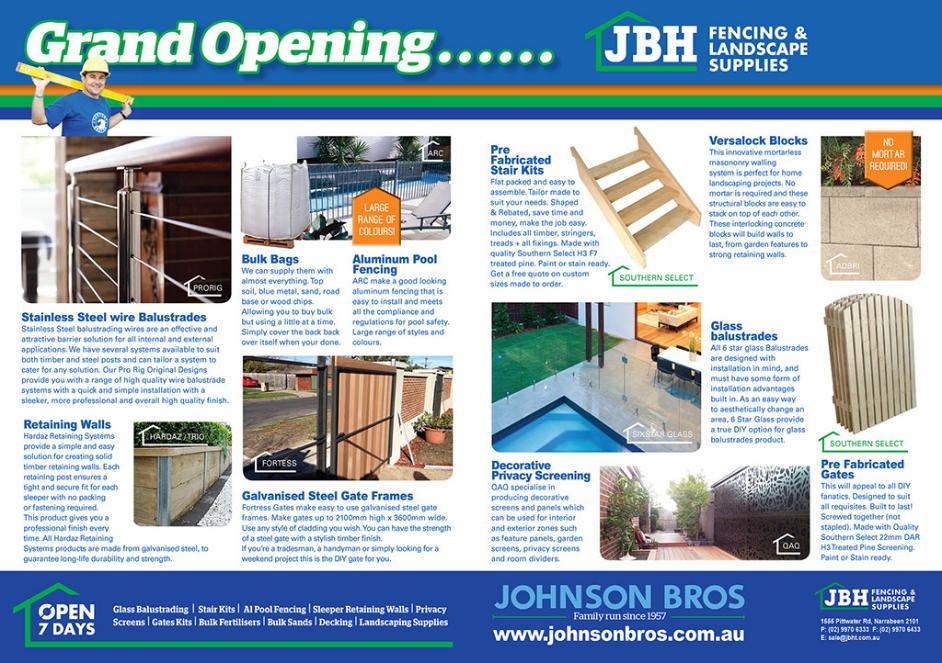 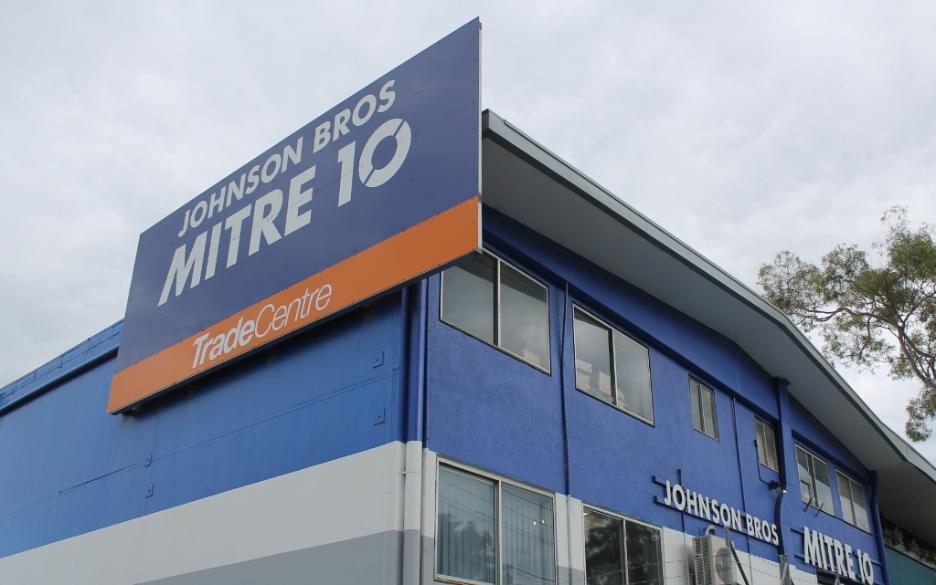