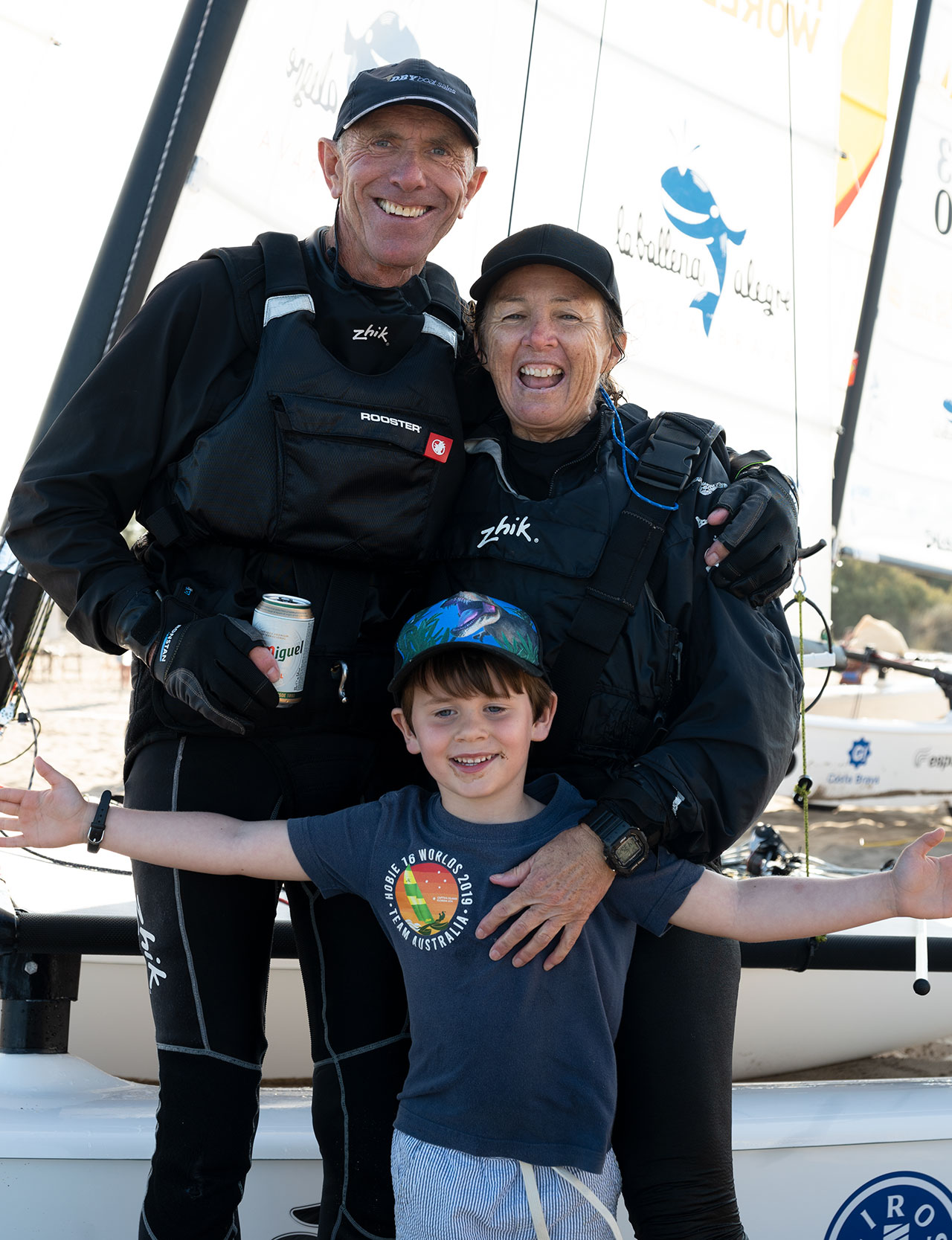 The Waterhouse family of Pittwater are having a very good sailing year. In May 2022 Team Australia; Rod Waterhouse and Chris Way, won the 2022 Worrell 1000, one of the toughest long-haul sailing races you can attempt. On September 21st Rod and Kerry Waterhouse won the Grand Masters in the 2022 Hobie® Cat 16 World Championships, one of several times they and fellow Palm Beach Sailing Club members have won the Hobie Worlds.

The very next day Rod was back on the water with daughter Bridget Bolewski, qualifying in the Opens Championship - as we went to press it was 8pm in Spain, where the 2022 Hobie Worlds are being held, with Team Waterhouse currently sitting 3rd overall after the qualifying races.

Then, of course, there is a long list other sailing World Championships and Olympics representatives the PBSC.

Kerry and Rod Waterhouse met racing Hobie 14s in 1975 and have been sailing together on Hobie 16s ever since.

Their children Jason and Bridget were brought up in the midst of the amazing Hobie family. Hobie bonded them as a family and importantly instilled in their children the thirst for adventure.

Years ago, when asked what the Hobie had given to them, Rod said; 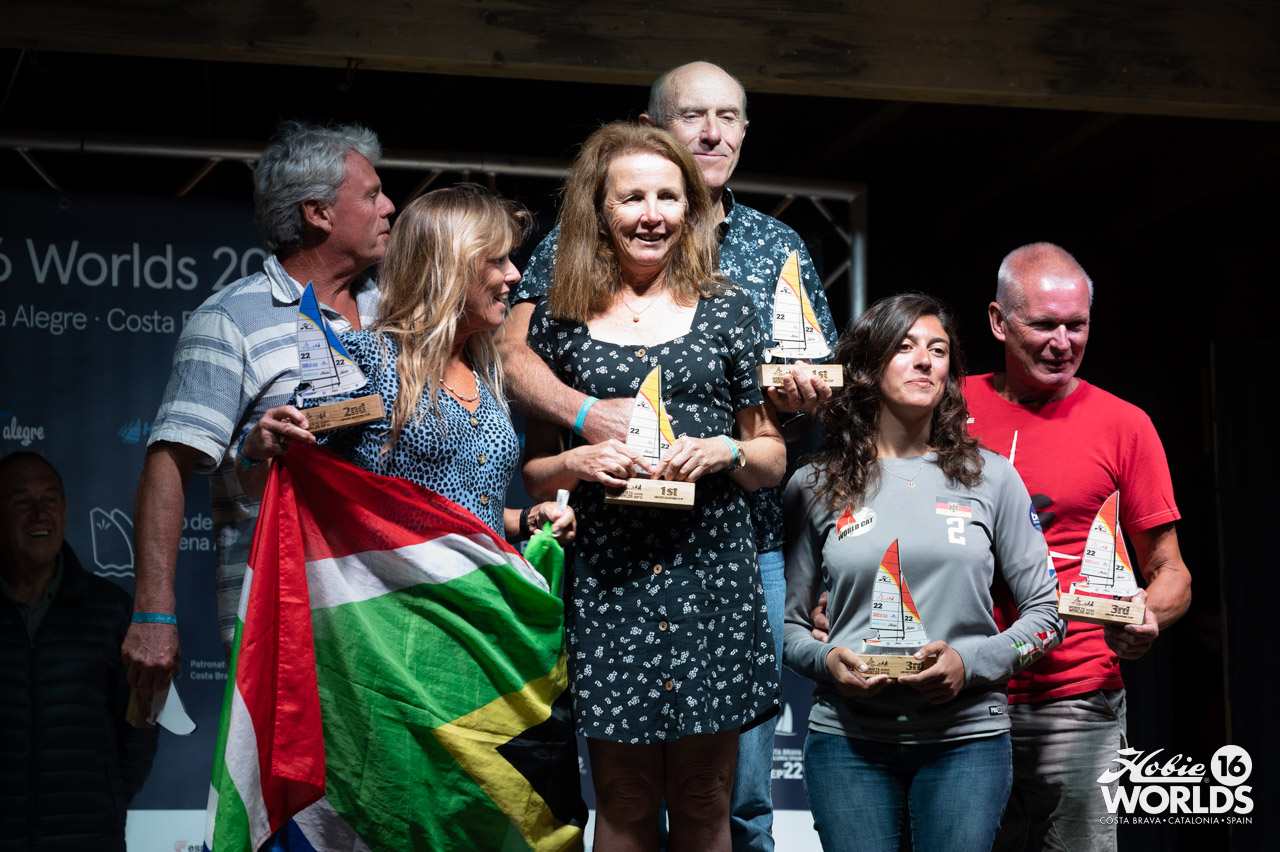 The Waterhouse family aren't the only Australians who have headed over to represent this year, although former Avalon Beach Pittwater resident and Australian Olympian Mitch Booth, who has also been have a good year, winning the IMA Trophy in 2022 RORC Transatlantic Race in January 2022 in record time, and now lives in Spain, may have a bit of a local knowledge advantage.

A 13-time World Champion, and four-time Olympian, silver and bronze medallist (he sailed in one Olympics with Bayview and PBSC's John Forbes), Mitch Booth and daughter Rita finished the qualifying rounds at 7th spot. One of his three sons, Jordi, teaming up with Ana Iacovone finished at 13th - and all the competing Booth family go into the Semis. The Booths, despite now being Spanish residents, are racing under the Australian flag. 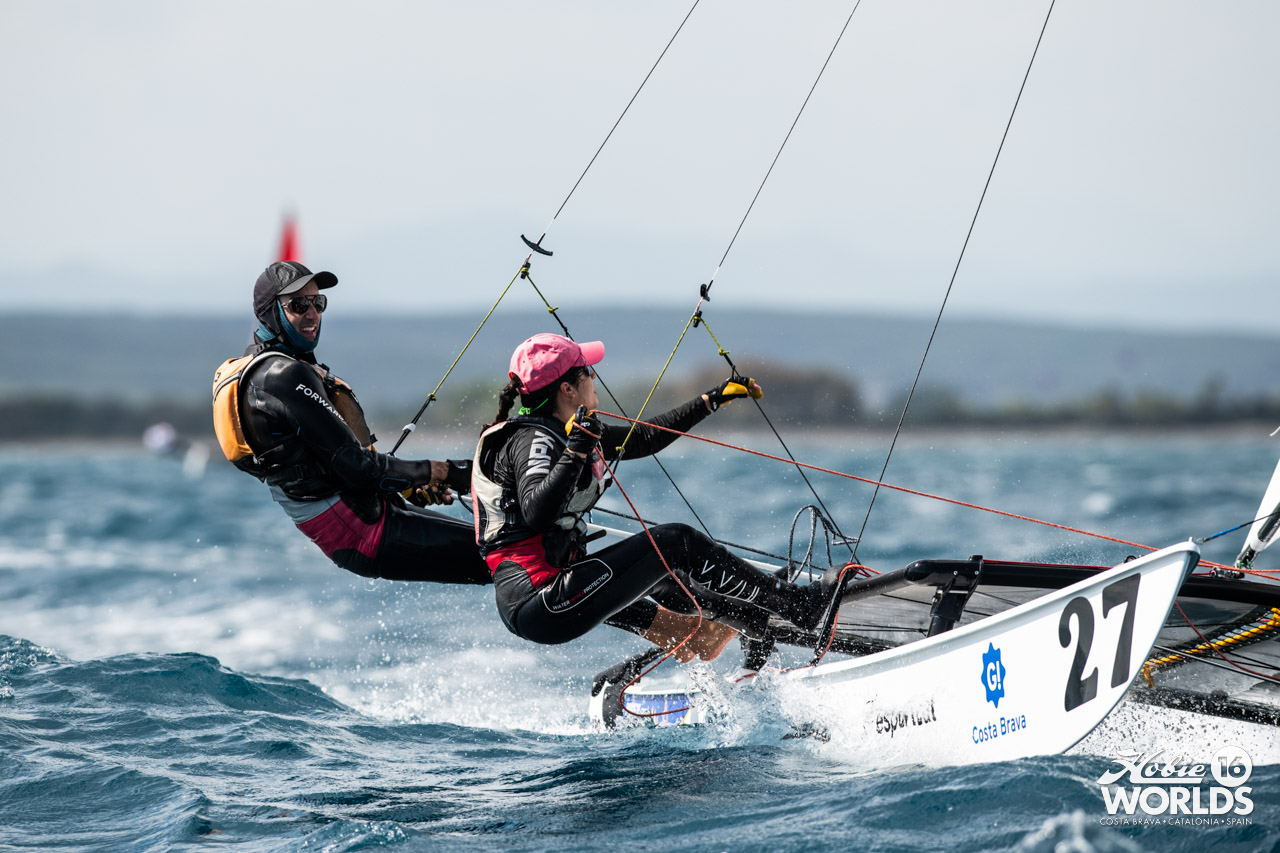 The Open Championship Series comprises all of the races in both the Semi Finals and the Final Races. The Semi Finals will be conducted over three day 25th – 27thSeptember 2022) weather permitting.

A maximum of 12 Round Robin Races will be conducted giving each entrant a maximum total of 6 races.

In the Semi Finals, all entrants will compete in an equal number of races and, if possible, against every other entrant at least once. Entrants will change boats after each race when conditions permit.

If at the end of the Semi Finals teams have fewer than four races, the Semi Finals will continue on 28th September 2022 to determine the top 48 teams who will then race the Finals Races.

The top 48 ranked entrants will race against each other in the Finals Races on 28th and 29th September 2022.

The final total score for each entrant will be the total score of all races in the Championship Series (Semi Finals and Finals Races), excluding the discard if 4 or more races are completed. The results will be announced at the Awards Party.

There is some tough competition over the next few days - stay up to date here:  hobieworlds.com

Meanwhile, around 1200 kilometres further south, Jason Waterhouse and SailGP is back in Cádiz this weekend as the European leg of Season 3 comes to a close with the Spain Sail Grand Prix. The Australia SailGP Team have done well in the first races.

The SailGP organisers state Australia put in a masterfully consistent performance amid a congested fleet to finish top of the podium after the first day of racing on the Bay of Cádiz.

In a key day for flight controllers, crews were forced to choose between speed and stability as ocean swells transformed the nine flying F50s into bucking broncos.

The Australians finished the day with a 6-1-2 racing record across the first three Fleet races, but close racing throughout means Australia and France are tied on 24 points heading into the second day of racing.

NSW-ACT 2022 Sailor of the Year Tom Slingsby’s crew struggled in the first race of the day, which was won by Peter Burling’s Kiwi team, as choppy conditions forced errors from the most experienced crews.

However, a race win in the second race and a second place finish in the third behind Ben Ainslie’s Great Britain puts Australia in pole position heading into Race Day 2.

Australia will face fierce competition however with just five points separating the top of the leaderboard from home favourites Spain in sixth place.

Speaking about Australia’s fragile position tied with France at the top of the podium, Slingsby admitted he was ‘not comfortable’ heading into the second day of racing.

“The points are so tight so for sure we’re not comfortable,” he said, “we need at least two good races out of three tomorrow to cement us in the Final. If we only have one good race, it will be up in the air and probably unlikely so we’ve just got to have a good first race and go from there.”

The nine F50s will return to the racecourse for a further three fleet races before the three-boat winner-takes-all Final on Sunday - or midnight for we here in the land of Oz.

After Spain the fleet heads to Dubai for racing over November 12-13.

SailGP will return to the iconic waters of Sydney Harbour on February 18-19 for the ninth event of SailGP Season 3. Tickets go on sale in October.

An exciting few days of sailing coming up for Pittwater, Australia and the Waterhouse family!