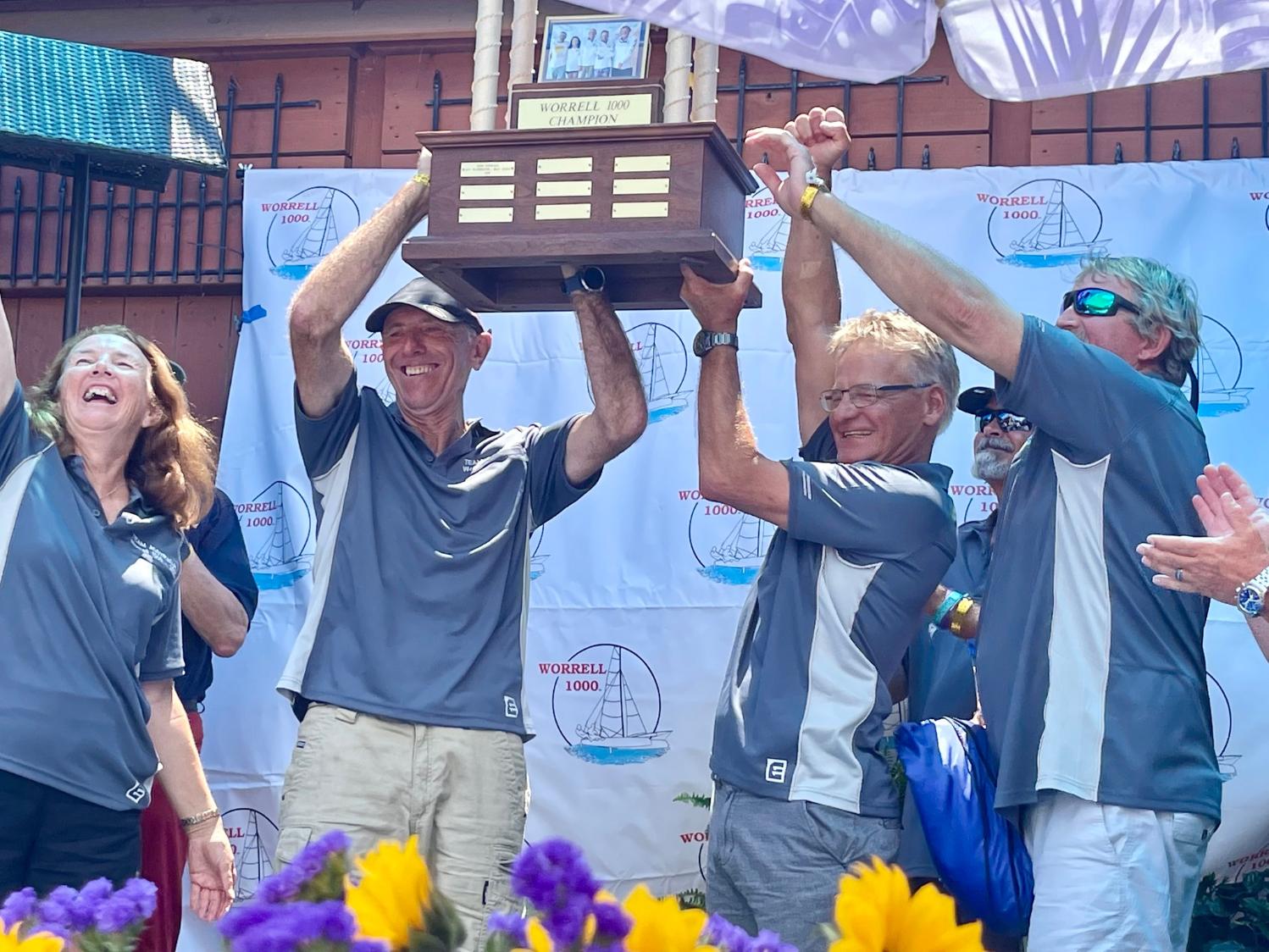 Congratulations to Team Australia; Rod Waterhouse and Chris Way for winning the 2022 Worrell 1000.

The Worrell 1000 is an offshore long-distance beach catamaran sailboat race held in May 2022 in the Atlantic waters between Florida and Virginia Beach, Virginia. The motto of the race is: "Iron Men, Plastic Boats."

The origins of Worrell 1000 can be traced to a bet in a bar at the Worrell Bros., a Virginia Beach resort restaurant. The bet was between the owners of the bar, brothers Michael and Chris Worrell. The bet was that it was impossible to sail a sixteen-foot catamaran from Virginia Beach to Florida. On October 1, 1974, Michael Worrell and his crew Steve McGarrett left the Virginia Beach oceanfront with hopes of reaching Florida in one piece. Although they did not win the bet they still sailed through two hurricanes and had to make multiple boat repairs. After twenty days, they had to stop in Fort Lauderdale, Florida due to their catamaran being in poor condition.

Later, Worrell thought of turning the 954-mile journey into a regular regatta. The inaugural race, called "Worrell Bros. Coastwise Race", took place in May 1976.  In 1979, Michael Worrell sold his half of Worrell Bros. to his brother Chris, who shortened the name of the race to Worrell 1000.

The teams, by invitation only, come from around the world and have come from as far away as South Africa and Australia, who, in 1981, was the second foreign team to win the Worrell 1000.

Rod Waterhouse has been travelling the planet for over 50 years on everything from Hobie 16’s to 60 footers as a serial weekend racer to hired delivery skipper. He’s also enjoyed many seasons captaining the family yachts while crossing oceans, canals and the Mediterranean with his wife Kerry and two children, Jason and Bridget, before settling in Pittwater. Rod and Kerry actually met racing Hobie 14s in 1975.

RPAYC member Chris Way has also had a passion for sailing for years, finishing 5th in a world sailing championship event in Sicily in 2017, in addition to a 2nd in the 2014 Platu 25 One Design Championship held at Ocean Marina, Pattaya, Thailand and is current Easy Tiger: Chris Way (Skipper). Easy Tiger secured podium position in the Ocean Marina Yacht Club PLATU Championship of Thailand 2022(30 April - 2 May 2022). This year’s Championship will be held over five rounds with a team’s best three scores to count. Fellow RPAYC members were on Easy Tiger with youth sailor Antony Hawke on bow, Andy Hewson (who just happens to be the GM of Tiger beer based in Singapore) on strings, Peter Winter on trim/tactics and Guy Kennard on main all the way from RPAYC Australia despite having to negotiate their way through restrictive Covid regulations. Team Oz comprising Brett Dryland, Rod Waterhouse, Evan Darmanin and Chris Way were also part of the rebadged Tour de France/Voile fleet which began from Dunkirk France in July 2015, so there's a long history of these crewmates taking on the best in the world in international sailing competitions.

After being cancelled in 2020 and 2021 due to the Coronavirus pandemic, the Worrell 1000 came back in 2022 with 13 Teams keen to pit themselves against the elements, test themselves and each other. Crews from the Netherlands and Great Britian as well as the Australians were part of the 2022 Worrell 1000.

The sail sections this year were: Hollywood Beach to Jensen, Jensen to Cocoa, the Cocoa to Daytona was cancelled, Daytona to Jacksonville, Jacksonville to Tybee, Tybee to Folly Beach, Folly Beach to Surfside, Surfside to Wrightsville, Wrightsville to Atlantic Beach, Atlantic Beach to Hatteras, Hatteras to Kill Devil Hills, and Kill Devil Hills to Virginia Beach, along the East Coast of the United States.

There was an Awards Banquet on Sunday, May 22nd, 2022 for the racers, their teams and family members/crews as well as the Worrell 1000 Race Committee and Organising Authority members.

Team Australia's first place in 2022 backs up their 2019 Worrell 1000 Reunion Race win, with MC at the Awards Banquet stating:

''His first race was in 1981 – he has sailed 14 Worrells with 14 finishes and 5 wins. He started out in a Hobie 16 and sailed non-stop, sailing 4 ½ days; you guys who have done that know what that means. He was 22 years old and sailed with Brett Driven/Dryven, who was also 22 years at the time and is a lifelong friend. He has sailed with Don Wood, his father-in-law who has just recently passed, who was 44 at the time. The Press called them ‘an old man and a couple of kids’. 4 years later, here we are in 2022, Rod is 63, Chris is 64 – Chris is a lifelong friend and somebody who sails the blue water all the time – ladies and gentlemen your 2022 Worrell Champions – Team Australia; Rod Waterhouse and Chris Way. ''

Rod stated in accepting this year's win and trophy:

''I’m going over old ground but thank you to the race officials – John and Beverly in particular, Robin, Jeanine, Bill and Chuck.

This race is a volunteer run event. To keep this thing going after such a quiet time and reinventing it 3 years ago, none of us would have this opportunity to celebrate and move forward for the next generation – so thanks to the whole team, we really do appreciate it.

I want to acknowledge the other place getters; Team Rudee's, the two Rudys  - Randy Smith and Dalton Trebo – I think we all know these are two super quick sailors, they are incredibly inspiring to us all. People are asking us if we’ll be back in 2 years time for the 50th and so the challenge is out there – Randy, if you do it, I’ll come in too. ''

''Tommy, Team Fast Forward, it’s the same league again into Hatteras. We were close behind Tommy and were able to relax and put the GPS down because we had Tommy just in front of us and were super confident just following him. Next we saw something was wrong and he was rounding up, next thing he capsizes – things just got worse and worse.

The interesting thing is at that point we were suddenly the chief navigators, so – we have three devices on the boar; 2 phones and a wristwatch, so when Chris’ GPS packed up straight away so I knew it was down to me, ‘I’ll use the watch’ – the watch I couldn’t get started – it kept getting stuck on telling me how many steps I’d done for the day, so that was no good. (laughter). The last recourse was my phone – which was inside a condom because of what Randy had told me (louder laughter) – it worked, absolutely brilliant – but then I started scrolling and the thing broke! (more laughter)

I’d like to acknowledge my team – first off our sponsor Tony who has just done so much for us all – thank you Tony. Our incredible mechanic Brett White – Brett this boat was reliable, fast and he put us here, so thank you Brett for all your efforts. Last presentation I neglected to mention my beautiful wife, so this time, my wife and my best friend, Kerri, thank you.

To my team mate and mate Chris – thank you for being so tolerant of me.'' 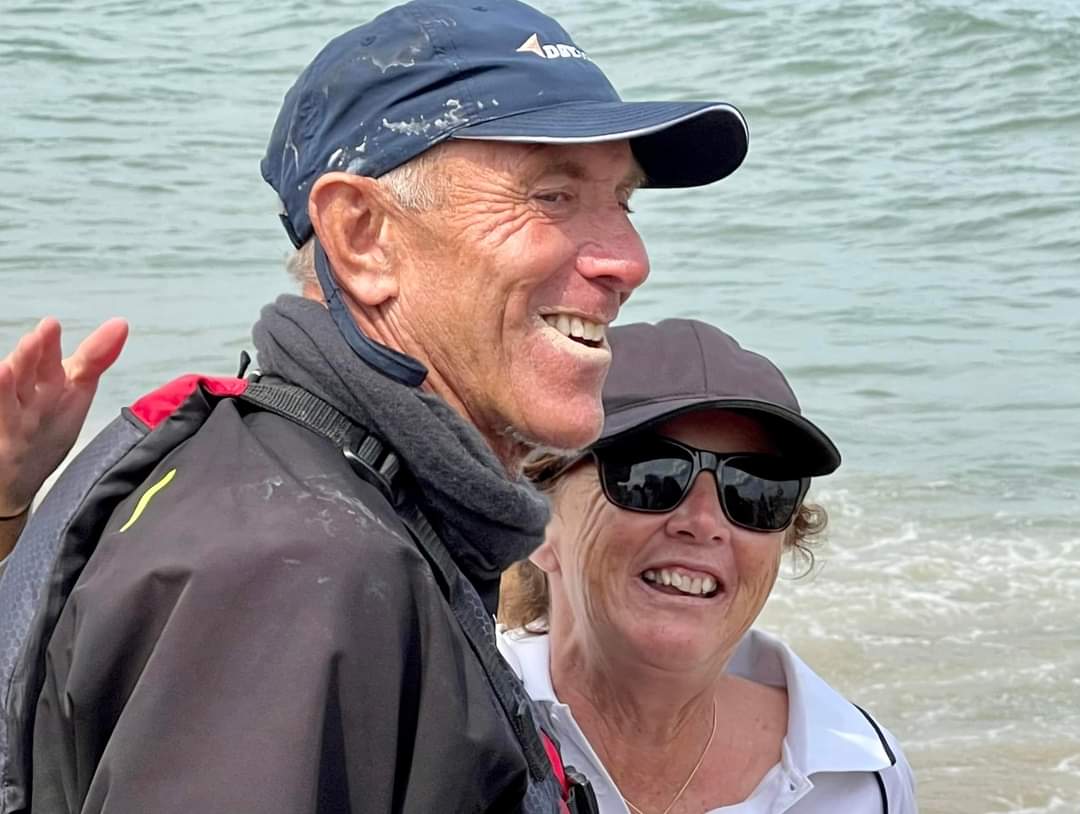 And then Rod said:

''Picture this – you are two on the wire going upwind in winds reaching 30, seas are 6 to 8 feet. You are cold and starting to shiver, your harness is digging into your hips and you’re trying to adjust your gear to relive pain in your kidneys and your back. Your life jacket is chaffing into your chin, your hand steering is going numb and you’re having to change grip constantly, you need to go to the bathroom but can’t as you’re in a race and stopping the boat is not an option. You don’t want to let your team mate down. You are hungry and thirsty but the food is not accessible in these conditions.

You see another huge wave in front peaking and you tighten up slightly as the boat rises before crashing back down, rig shaking. The cold wave hits the crew square and you duck behind the avoid the worst. He sheets back in the mainsail with hands you know are already blistering. A massive gust hits and shakes the boat. You just try to keep it from being thrown forward and keep it upright.

And the worst thing is, you look forlornly at your watch; it’s 11am – you are just one hour into a 10-hour leg upwind, all sailing in plastic boats!

Congratulations to all the competitors, I’m absolutely honoured to be among you and to be your friend.

Brett White said; ‘’An absolute pleasure to be the team manager and such a humble experience to bring this together for the second time.’’

Mr. White as always, underplays his part in this iconic race. On May 13 he joined the team CAT in a HAT as a skipper.

He stated then; ''Excited sailing with Larry Ferber! Zack Panetti decided to withdraw from the race after extremely hard LEG2. He will be joining ground crew and do the pushing for Team Australia.''

This alone underlines the camaraderie that takes place between crew and team members for the Worrell 1000.

Team Australia thanks Tony Prues, Team Australia's sponsor and who supplied our transport and accommodation for the trip on the Worrell 1000 2022. 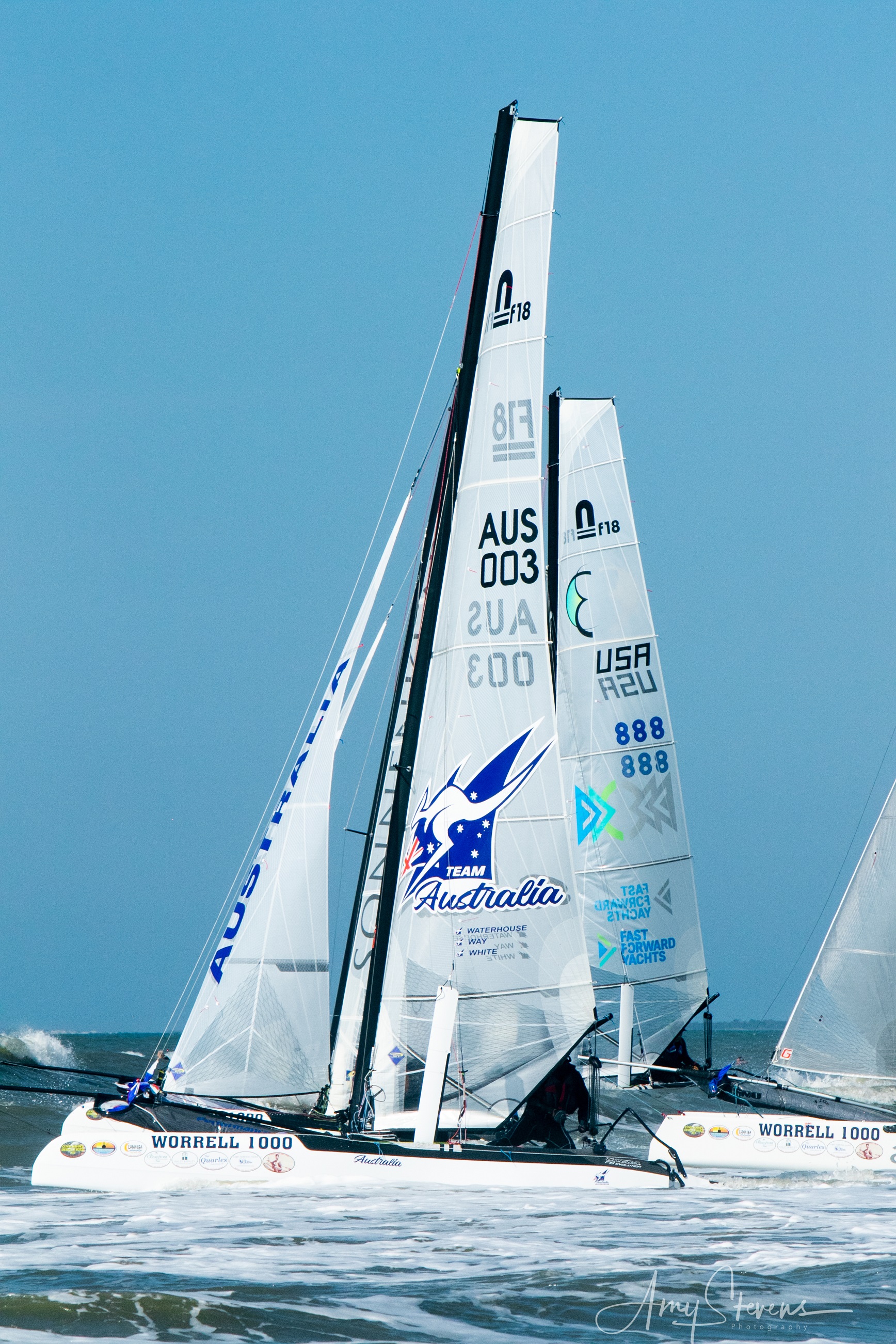 The Worrell 1000 Race, our Board, volunteers, and staff are dedicated to the principle of environmental stewardship. Our passion for beach catamaran racing brings us into direct contact with habitat and coastal environments that merit and require our personal involvement in restoration and preservation efforts. For the 2019 race, we worked closely with local and state-level volunteer organizations at select checkpoints with coordinated beach clean-ups to show the residents and businesses in these beach communities that we were grateful for their hospitality, and that we were good stewards of the ocean and shoreline along our route.

Our team is working, too, with the regulatory community and volunteer organisations dedicated to the protection and preservation of sensitive habitat. May is sea turtle nesting season, and since the beginnings of the Worrell in 1974, we’re proud that we’ve successfully protected and helped preserve turtle nesting sites all along the Atlantic coastline. Hand-in-hand with local volunteers, we help mark and protect nests, and eliminate night-time light sources that can negatively impact nesting habits in and near developed beach communities.

For 2022 we have teamed up with Bonnie Mitchell, Coastal Education Coordinator for a beach clean-up on May 17th in Wrightsville on the Sound Side of the Host Hotel, The Blockade Runner. Bonnie states: "The North Carolina Coastal Federation is really excited to partner with the Worrell 1000 Race this year! We are so grateful for their strong sense to protect our coastal waters. Also, it is really fun for me personally because my Uncle Rock Bell took home 5th place in the 1983 Worrell 1000 Race." Look for us the afternoon of the 17th and help us out if you would like! 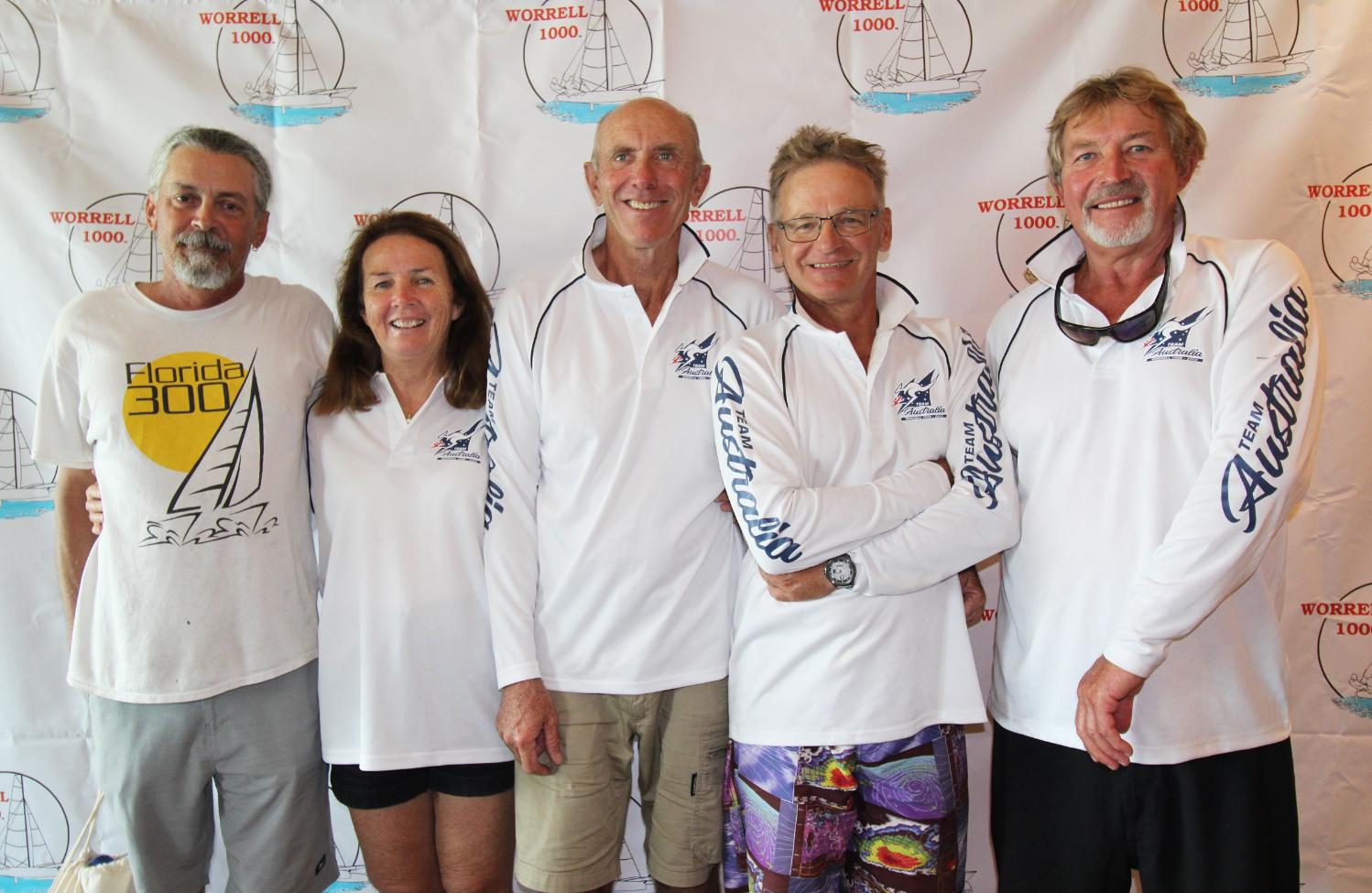 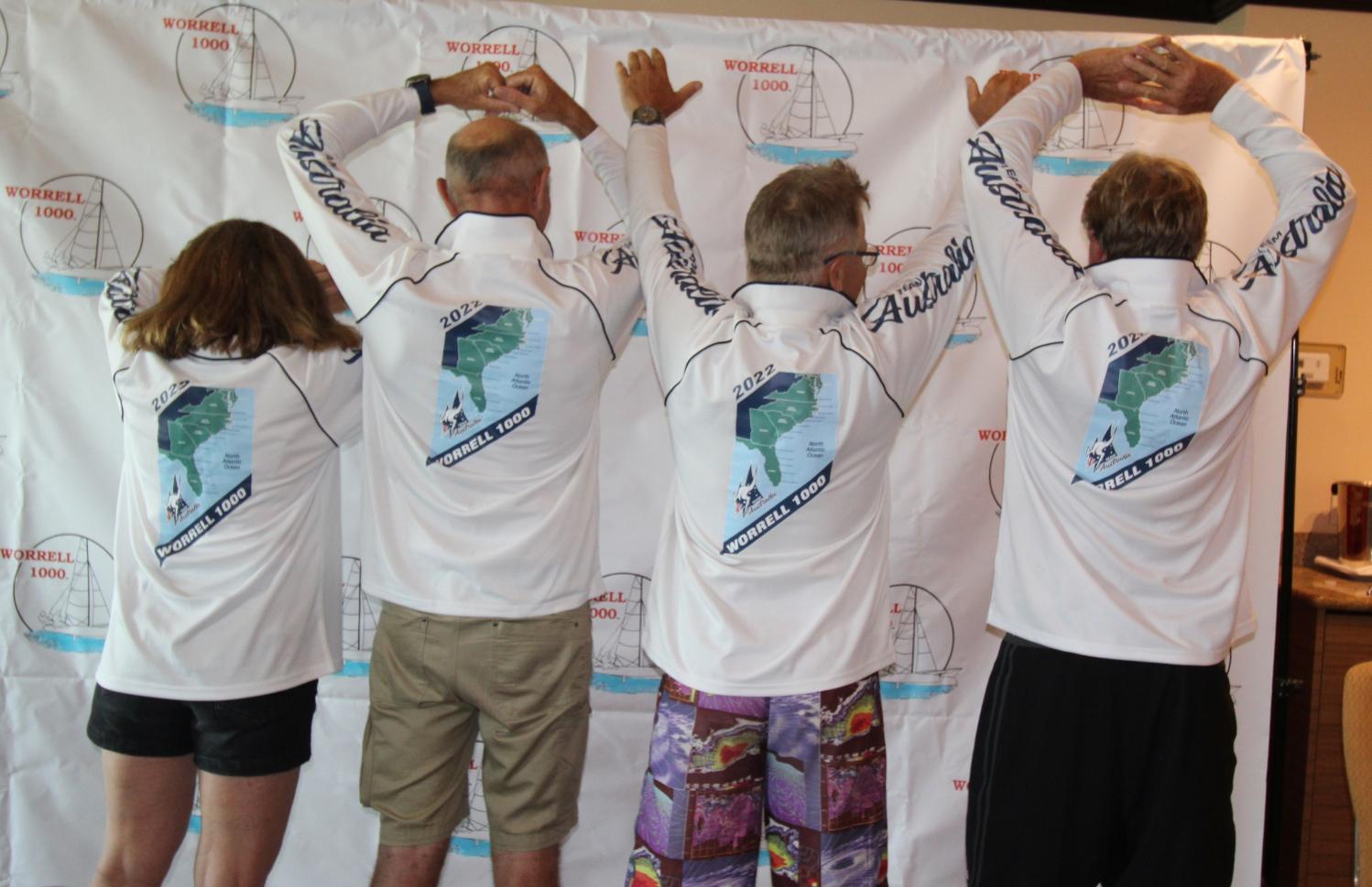