This chirruping watercourse runs through the heart of Warriewood valley, funnelled by the lie and slopes of the land. Warriewood was mostly rural, still filled with paddocks and a horse lovers paradise until a few decades ago, making it a watercourse and drinking channel for early settler's livestock and vital to those farms that grew produce. With industrialsed works coming to this valley pollutants and invasive weeds on its banks and in its bed caused Pittwater Council to declare it as the most polluted creek in Pittwater (1995) and rehabilitate its channel and environs.

There are numerous theories and legends associated with the word 'Narrabeen', some stating the word, means 'fresh water' others suggesting the term is derived from 'Narrabin', the name of a plant that once flourished on the banks of this creek. Lieutenant James Grant's journal of January 1801 states he had problems of crossing a stream, which the Aborigines told him was called Narrowbine(1.):. “We got up before day-light, and having taken one of our hospitable friends for  a guide, who was both more robust, and stronger than the natives are in general in this part of New Holland, he armed himself with a spear, and moved onwards with us till we came near to the banks of a stream, which the natives called Narrowbine.  It was but barely peep of day, and objects were not easily distinguishable, yet the native informed me he saw somebody on the opposite side."

The name 'Narrabeen Creek' originally referred to what is now known as Deep Creek. James Meehan mentions Narrowbang lagoon in his survey in 1815.

Aboriginal peoples have left a few Scarred Trees and numerous engravings in the Warriewood valley-Ingleside escarpment, the least worn in Warriewood being a series of eels and a spear, are to be found near Narrabeen Creek. John Ogden, who contributed a history page on Petroglyphs earlier this year, spoke of the sacred rituals associated with these images. These places were revisited in the seasons the creatures they represent would flourish or be due to arrive in and would be re-carved, or the grooves deepened, as part of 'singing in' the songs of, in this case eels and eel hunting. These were sacred ceremonies.

The Short Finned Eel Anguilla australis does well in areas of lower water velocity and are common and widespread in coastal river systems and streams in New South Wales. Mature adults migrate from fresh water to the sea in order to spawn with the new 'elvers' being around three years old before they return to fresh water and upstream, usually in the Autumn. They eat fish, insects, yabbies, frogs.

Narrabeen creek flows from Kuringgai National Park to Narrabeen Lagoon, forming an integral part of the reclaimed and regenerated Warriewood wetlands. Most of this area is marked as swamp and marshy on early nineteenth century maps. Narrabeen creek flows through the middle of Warriewood valley and Mullet creek at its southern edge. The wetlands of Warriewood are an important habitat for many birds, including migratory birds, native mammals and frogs. Marita Macrae's Breakfast with the birds, 2011, lists a sample these. There are also a significant number of Swamp Mahogany trees, eucalyptus robusta, currently flowering.

James Jenkins, patriarch of the Jenkins family of four sons and four daughters, an ex-convict and family who also had acreage at Long Reef, is the first recorded settler in this area, granted land in 1826. His first born child, Elizabeth, named after her mother, had lands to and from the other side of Narrabeen Lagoon. An indication of his holding and use of it appears;

THE following Persons are permitted to Depasture their LIVE STOCK on the Lands adjoining their respective Properties, as undermentioned, on the conditions specified in the Resolutions of the I6th October, 1828; namely:

1st. That they pay Rent for the same, at the Rate of Two Shillings and Sixpence Sterling per Annum for every Hundred Acres; and  2d. That they abandon the said Land at any time, on receiving One Month's Notice.

They are accordingly informed, that they will be expected to Pay the said Rent from the 1st of the ensuing Month.

1. ELIZABETH JENKINS, 60, Sixty Acres; described as No. 4 in the Government Notice of 19th September,1831, in the name of Alexander Mc Donald.

2. ELIZABETH JENKINS, 60, Sixty Acres; described as No. 5 in the Government Notice of 19th September,1831, in the name of Alexander Mc Donald.

3. ELIZABETH JENKINS, 80, Eighty Acres; described as No. 6 in the Government Notice of 19th September, 1831, in the name of Alexander Mc Donald.

Tree felling and land clearing ensued, with one of the tree fellers stated to be Leon Houreux who was also reputed to have a still on Narrabeen creek prior to and even during his early years at the Rock Lily. Many people had private stills, these reports being unsubstantiated.

The verdant green of Warriewood valley bears testimony to a rich fertile soil. This quality was emphasised as the shifts between who owns what and dwells where changed. First an advance on tracks to roads had to be achieved to ensure accessibility; 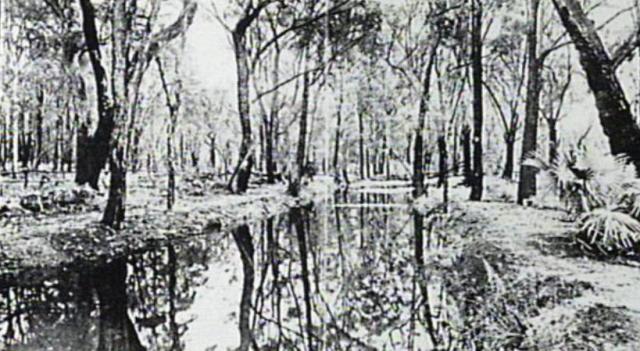 Photograph of Narrabeen Creek and surrounding land that appeared in the brochure advertising sale of land in the Warriewood Estate by Henry F. Halloran &amp; Co. 1906. Image No: WW\WW-004. Courtesy of Mona Vale Library's Historical Images.

Below: Photograph of Warriewood Valley that appeared in the brochure advertising sale of land in the Warriewood Estate by Henry F. Halloran &amp; Co. 1906. Image No: WW\WW-006.  Warriewood (N.S.W.); 1906. Courtesy of Mona Vale Library's Historical Images. 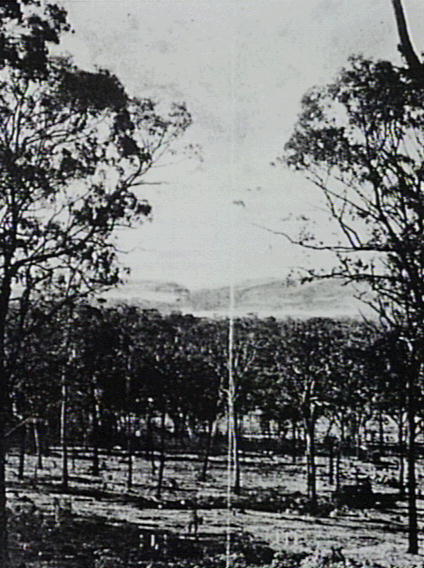 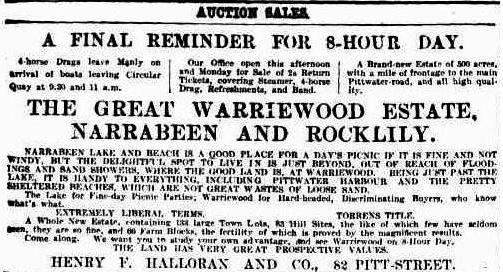 Sales were a day's ‘outing’ and included refreshments and a band !  The 8 Hour Day is now known as Labour Day.

Below: rehabilitated eastern borderline of Blackmore's estate, Warriewood, last week of November, 2011. It was raining that day and this conduit for Narrabeen creek was singing, literally, with the frogs thriving in it.

In 1905 (Ref. map  Parish of Narrabeen ) there was only one Narrabeen Creek, at the present site of Deep Creek. It was In 1906 when estate agent Henry Halloran advertised the "Warriewood Estate" for sale for the first time, that he decided to name a second creek,  "Narrabeen Creek", which ran right across his estate starting near Mona Vale Road and finally reaching present Mullet Creek. Over the years this second naming, in a different location, caused considerable confusion.(2.)

Development as poultry farms, sheeplands, dairylands and a veritable garden of Eden in produce marked the following decades. During the 1920s families from Yugoslavia moved into the valley. The farming district was known as Glass City because the valley was covered with approximately 3,500 glasshouses, mainly used for cultivating tomatoes. Field crops such as peas and beans were also grown, with record yields thanks to the soil and pristine creek waters.

TOMATOES OF QUALITY. SUCCESSFUL METHODS AT WARRIEWOOD. Rarely if ever before within the metropolitan area have better class tomato plants been seen than those which are now growing luxuriantly in the glasshouses of Messrs. Brand Bros., of Warriewood, near Narrabeen. Yesterday afternoon, when a representative looked in to see how the plants were shaping, the tomatoes were most impressive. In leaf and stem growth, In the number and strength of the bud bunches, and also in the setting, quality, and colour of the fruits' the plants were splendid. The growers have done fine work this season during a period which has brought disaster to many outdoor and glasshouse workers in tomato culture. The warm, sheltered position of their big houses, and their expert handling has contributed much to the result. TOMATOES OF QUALITY. (1929, August 28). The Sydney Morning Herald (NSW : 1842 - 1954), p. 13. Retrieved from http://nla.gov.au/nla.news-article16579174

During the 1960s market gardening declined although most of Warriewood, apart from some pockets of light industry, and nurseries was zoned as a rural until 1991 when the state government permitted subdivision. By 1995 the resulting runoff into Narrabeen creek had made it seriously polluted and in danger as the aorta of Warriewood valley. Dragonfly Environmental were employed to install a Detention Basin at Narrabeen Creek. A small wetlands has been established to improve the quality of the creek's water at its southern reaches. Today volunteers from the Coastal Environment Centre monitor the health of this creek.

The Macphersons of Wharriewood and Narrabeen: the photo albums of William Joseph Macpherson