School Strike 4 Climate Action Grows 10x in a few months; the next Strike could close australia for the day 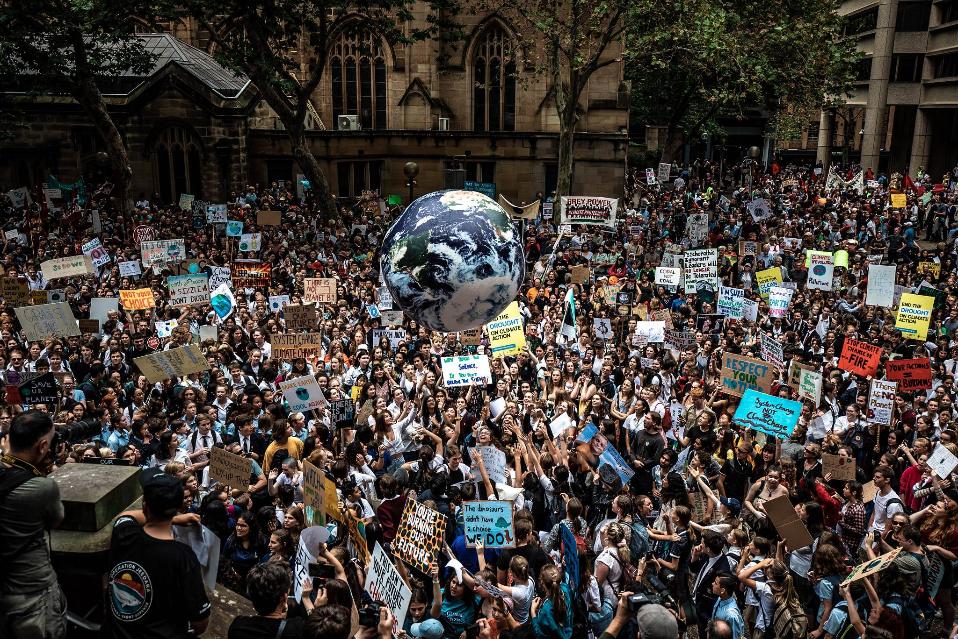 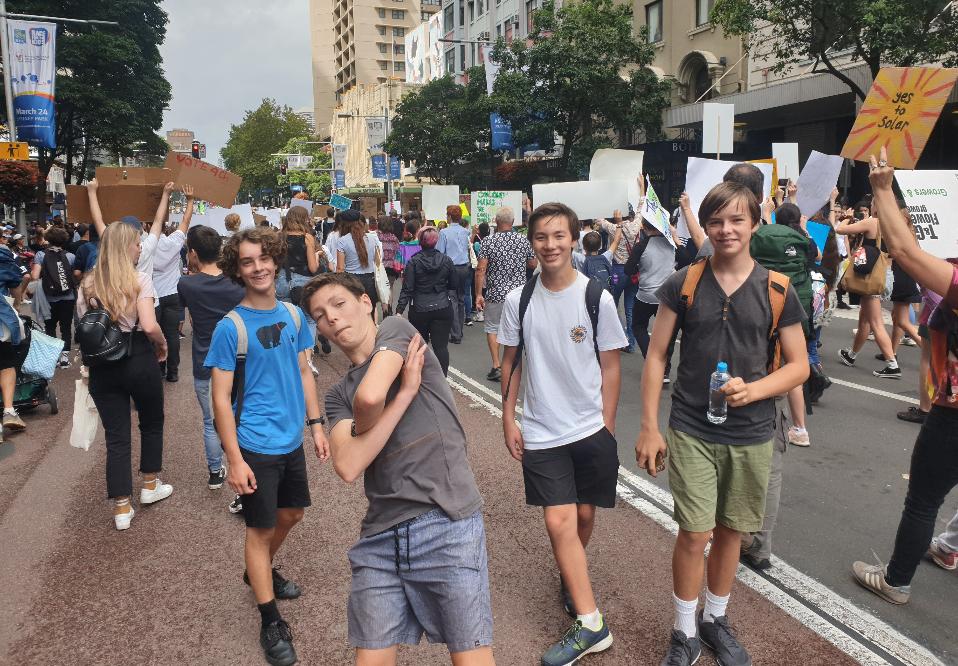 Harley Ratcliff and his year 8 mates - photo by Lisa Ratcliff

On November 30th 2018 around 15 thousand students forwent a day at school preparing for their future in order to state that they needed to know they would have a future to prepare for.

On Friday March 15th 2019 150 thousand Australian students, Pittwaterians among them, again forwent a day at school, preparing for their future, in order to state that the time to step up and ensure they have a future is now well overdue - by decades in fact.

Considering the amount of stress already being heaped on a generation that should, like the many generations that preceded it, be free from worry enough to be able to 'go out and play', a negligible approach, turning up to federal parliament or state government with lumps of coal ('let them eat coal') or facilitating the destruction of once pristine areas so a few may get fatter is now considered passe, gauche - last century, last millennial.

Over 800 Australian academics have signed an open letter of support for the School Strike for Climate  - it reads;

We, the undersigned, wish to offer our support as academics to the school climate strike on March 15 and all those taking a stand for the future of the planet.

The latest Intergovernmental Panel on Climate Change by the United Nations estimates that, on current emissions reductions commitments, the world is on track for a 3 degree average increase in global temperatures by 2100. The Arctic is warming faster than anywhere in the world, resulting in rapid reduction of snow and ice coverage - if current trends continue, the Arctic Ocean could be ice free in summer by the late 2030s. Globally, weather extremes are frighteningly incessant and violent. ‘Hottest summer day’ records have seemingly become an annual routine here in Australia. Heat-related illness death tolls steadily climb. In Tasmania, thousands of hectares of thousand-year old forest burns.

It is in this context that both major Australian political parties give their enthusiastic support for the Adani Carmichael coal mine in central Queensland. The Queensland state Labor government has given Adani unlimited access to water from the Great Artesian Basin for the next 60 years. It is projected that the completed mine, at peak production, will contribute more annual emissions than Bangladesh, a nation of 160 million people. The exact scale of damage it will deal to the area’s delicate ecosystem is difficult to predict. What is certain, though, is that the mine will open the region for more corporate interest: Adani’s chief executive, Jeyakumar Janakaraj, insists that “more mines will go there because we are building a 100-million-tonne railway and a 120-million-tonne port.”

In light of these circumstances, we offer our full support of the students who plan to strike on 15 March to demand that the Australian government takes climate action. The students’ demands for a complete stop to the Adani Carmichael coal mine, no new coal or gas and 100% renewable energy by 2030 provide a crucial platform to begin the reversal of environmental damage before it becomes irreparable. We support the demand that all state and territories pursue a ban on the expansion of gas mining, both conventional and unconventional. We understand the importance of a vibrant protest movement as one that can counter the ubiquity of corporate interests and climate denialism in Australia. The student strike of late November was a heartening step in a crucial campaign - it is our hope that the March action is even more successful.

In over 60 cities and towns across our nation the 'future' demanded immediate and urgent leadership from Australian politicians to tackle climate change. Internationally, students in more than 123 countries took action at 2052 strikes, bringing over one million voices to Friday's protest. They marched in Prague, in New York city, in Manchester, in Paris, Dublin, Parma - in fact everywhere - even in Antarctica;

Last December over 15,000 hit the streets in response to Adani’s announcement it would self-fund its Carmichael mine. Australian  government's at state and federal level are hellbent on enabling Adani to spread a blackmark alike that seen in the Caley Wetlands at Abbot Point in 2017, with approval after approval granted that ignores Australian farmers, conservationists, citizens and students.

16 year old Nosrat Fareha from Western Sydney said, “The turn out across Australia was nothing short of amazing.

“Politicians have responded with indifference to our crippling summer of record heat, bushfires and floods. It’s no wonder so many came out in support today.

“With the federal election around the corner, our political leaders must commit to stop the Adani coal mine, say no to new coal and gas projects and transition to 100% renewable energy by 2030.

“There’s no time to stand by and wait for the bold action we need. We will keep organising, building our movement and riding the wave of community frustration until Scott Morrison and Bill Shorten step up to the job.” concluded Fareha.

Students are discussing further strikes if they don’t see the action they need from politicians. Other plans include #ClimateElection KickStart meetings at the end of March to make plans to pressure politicians to show climate leadership, and local climate change candidate forums where candidates will be challenged by school students to commit to stop Adani and act on climate change.

A 21st century version of feudalism as our political-corporatism system is also, now, very 'last century' - people do speak up, even when it's not an election season or year, and do take companies to court for their transgressions or to stop clearly destructive coal mines - all funded out of their own pockets. If those doing it for free are doing it better than those who get paid squillions and still get it wrong, the transition towards saving the meek of the earth is happening now and that momentum will not be arrested - as so many were in past standings up to huge transgressions.

It's a pity that the kids have to do it again, as they have in past generations, and that some of the 'adults' in the room are scoffing at them, patting them on the head and telling them to stay in school, as they did to past generations - BUT, now the the democratisation of media is part of our times and people can sidestep publications whose agendas show in 'TELL's, now that the UN is taking a stance to ensure there is a future too through The Intergovernmental Panel on Climate Change (IPCC) which requires member nations to step up too, those still bulldozing koala habitat, those still digging big black holes in the ground, even those cutting down 100 year old trees in our Pittwater neighbourhood to improve their view may think again.

In the wake of Friday’s demonstrations by schoolchildren across the world against climate change inaction, the UN Secretary-General has said he understands their fears, but is hopeful for the future.

In a direct message to the youth activists who took to the streets, UN chief António Guterres said that he understood the anxiety and “fear for the future” behind their actions but added that “humankind is capable of enormous achievements. Your voices give me hope.”

Writing in an opinion piece for The Guardian, Mr. Guterres said that the more he witnessed the “commitment and activism” of young people who were fed up with the pace of the international response to global warming, “the more confident I am that we will win. Together, with your help and thanks to your efforts, we can and must beat this threat and create a cleaner, safer, greener world for everyone,” he added.

“These schoolchildren have grasped something that seems to elude many of their elders”, he said, adding that “we are in a race for our lives, and we are losing. The window of opportunity is closing; we no longer have the luxury of time, and climate delay is almost as dangerous as climate denial.”

The Secretary-General acknowledged that his older generation “has failed to respond properly to the dramatic challenge of climate change.  This is deeply felt by young people. No wonder they are angry.”

Global emissions are reaching record levels, and continuing to rise, he said, adding that concentration of carbon dioxide in our atmosphere is the highest it has been in 3 million years.

“The last four years were the four hottest on record, and winter temperatures in the Arctic have risen by 3°C since 1990,” he added, noting also rising sea levels, the death of coral reefs, and a growing threat to human health worldwide, as made clear in the UN’s Global Environmental Outlook, published this week.

The historic 2015 Paris Agreement signed by more than 190 countries to keep global emissions well below 2°C, “itself is meaningless without ambitious action,” said the UN chief.

“That is why I am bringing world leaders together at a Climate Action Summit later this year. I am calling on all leaders to come to New York in September with concrete, realistic plans to enhance their nationally determined contributions by 2020, in line with reducing greenhouse gas emissions by 45 per cent over the next decade, and to net zero by 2050.”

The latest analysis shows that if we act now, we can reduce carbon emissions within 12 years and limit global warming to 1.5°” said Mr. Guterres. “But if we continue along our current path, the consequences are impossible to predict.”

“Momentum is building:, he added, “people are listening and there is a new determination to unleash the promise of the Paris Agreement. The Climate Summit must be the starting point to build the future we need.”

We do not inherit the earth from our ancestors; we borrow it from our children

The next School Strike for Climate Action, based on a simple 10 x arithmetic, will be 1.5 million people here - after that 10x becomes Australia closed down for a day that's not about a car race, footy match or because we've won the America's Cup .... and clearly an attempt at preventing Australia from closing down permanently.

Most get the picture, but are those the next generation are speaking to getting the picture? 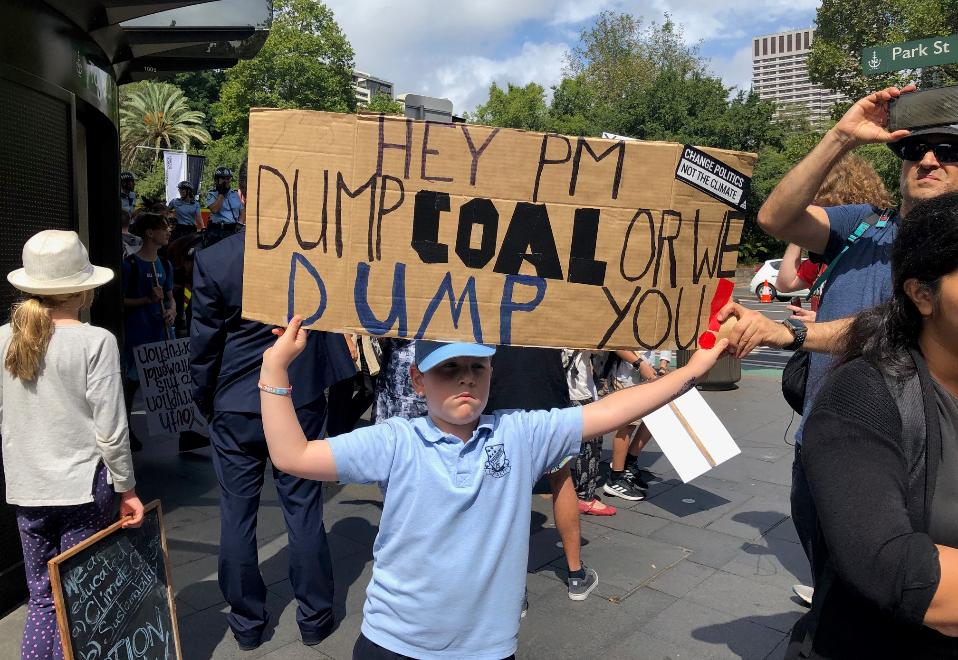 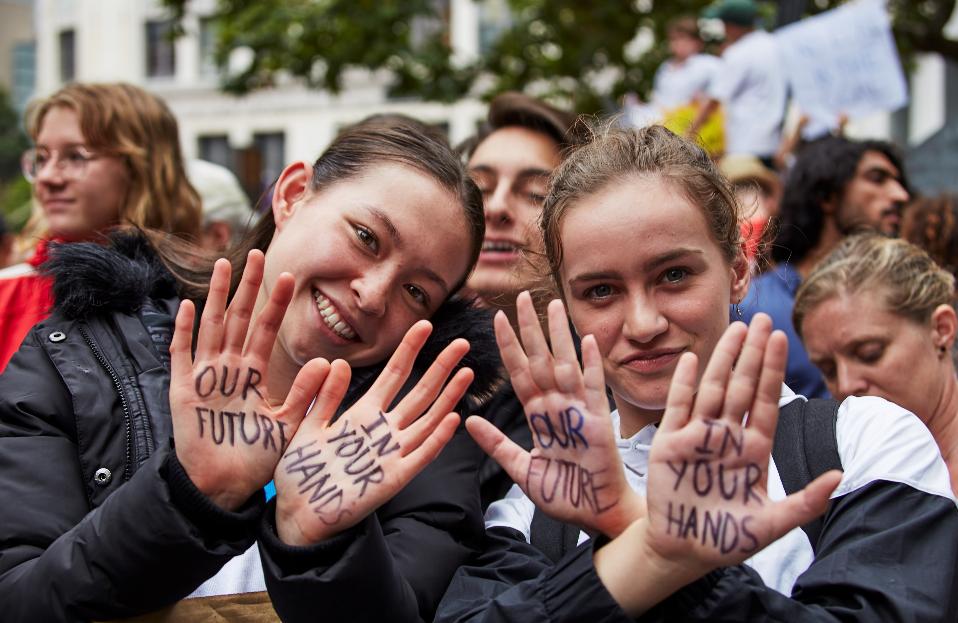 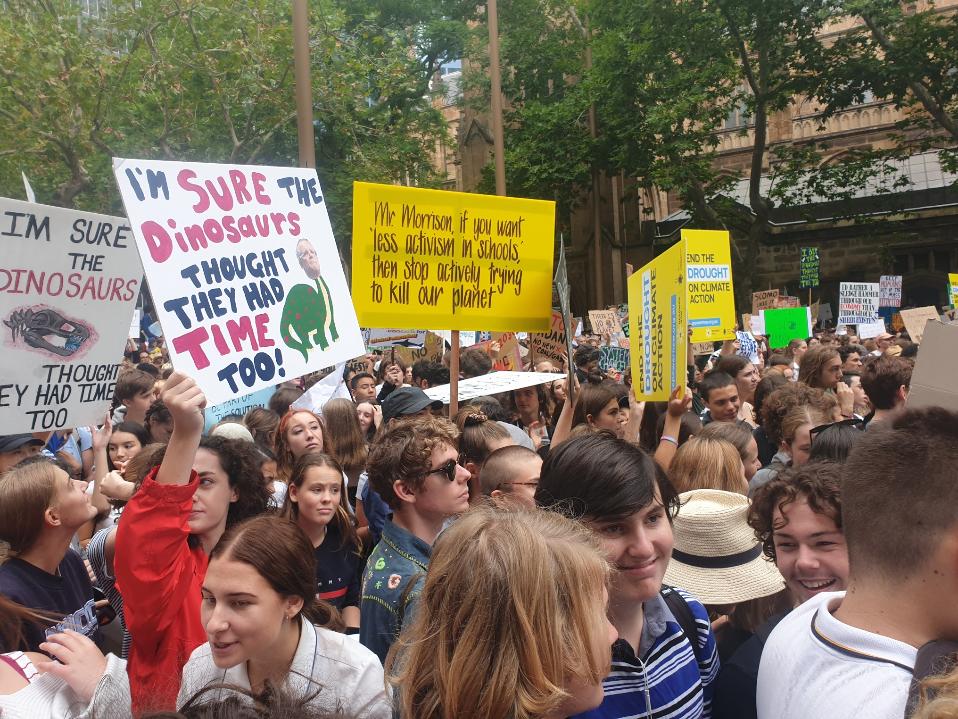 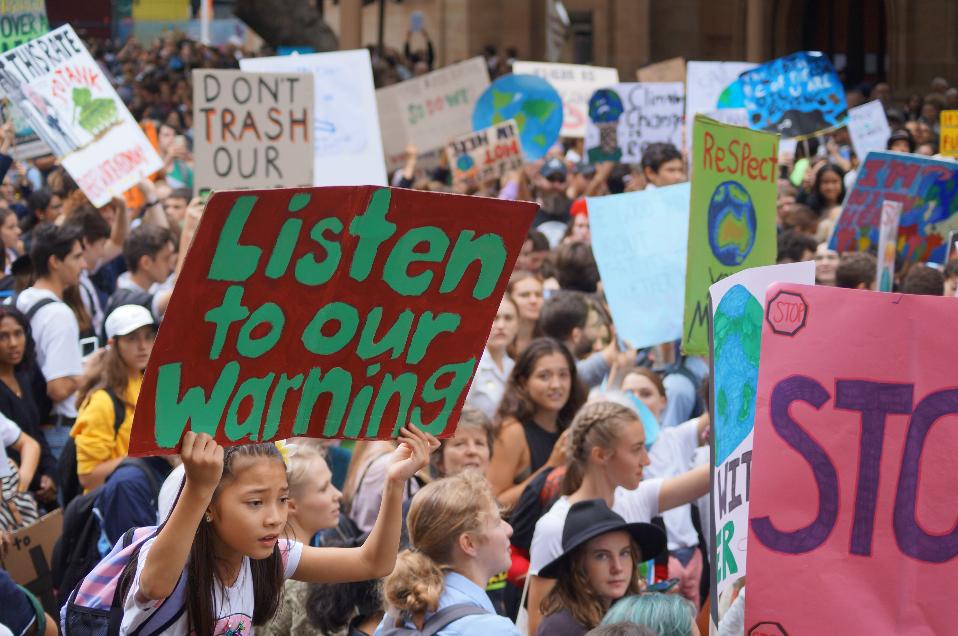 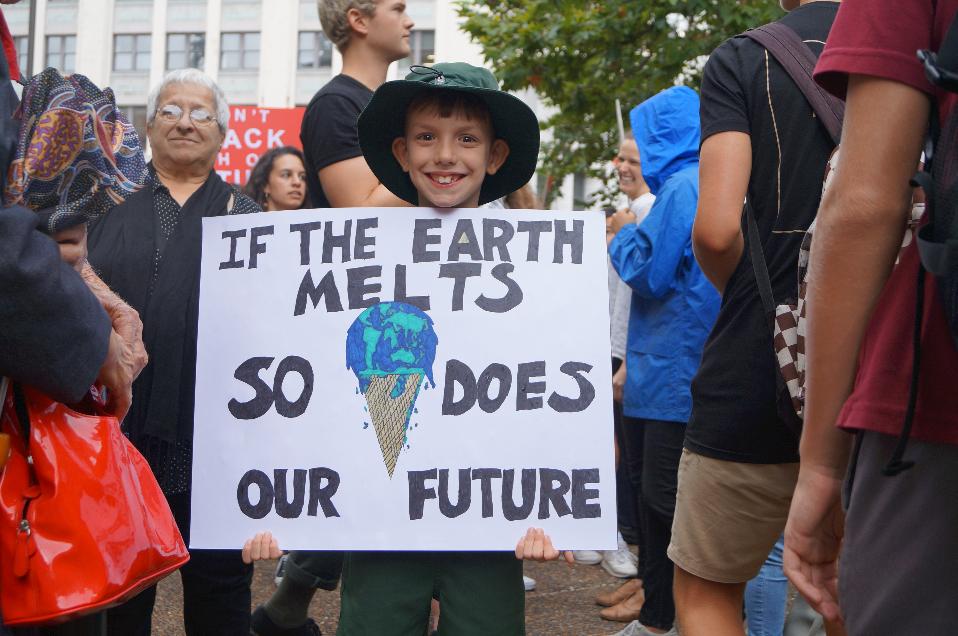 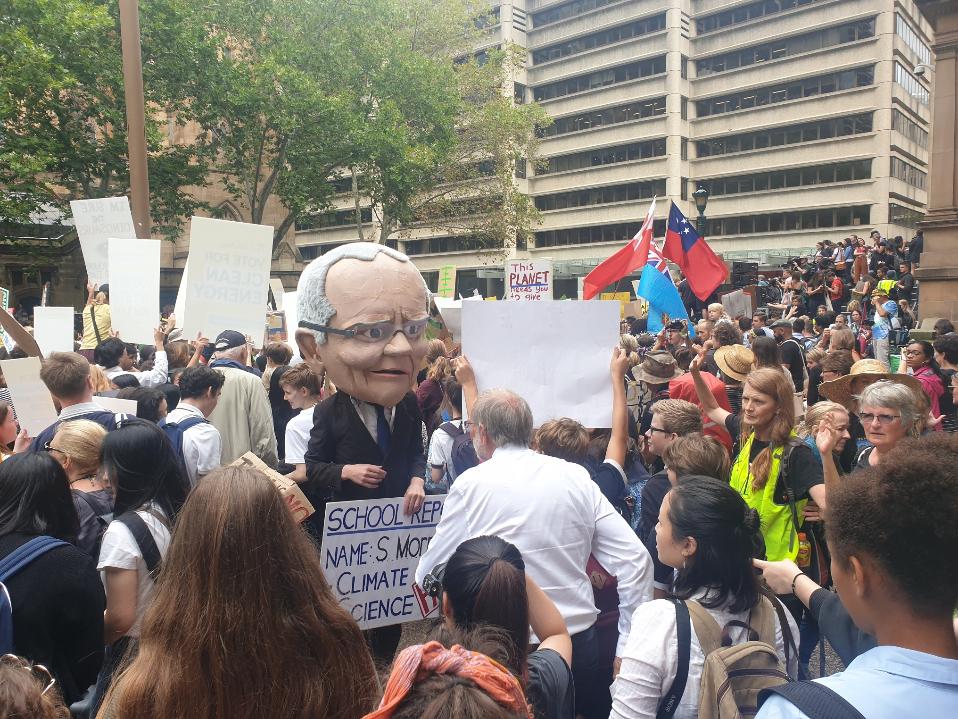 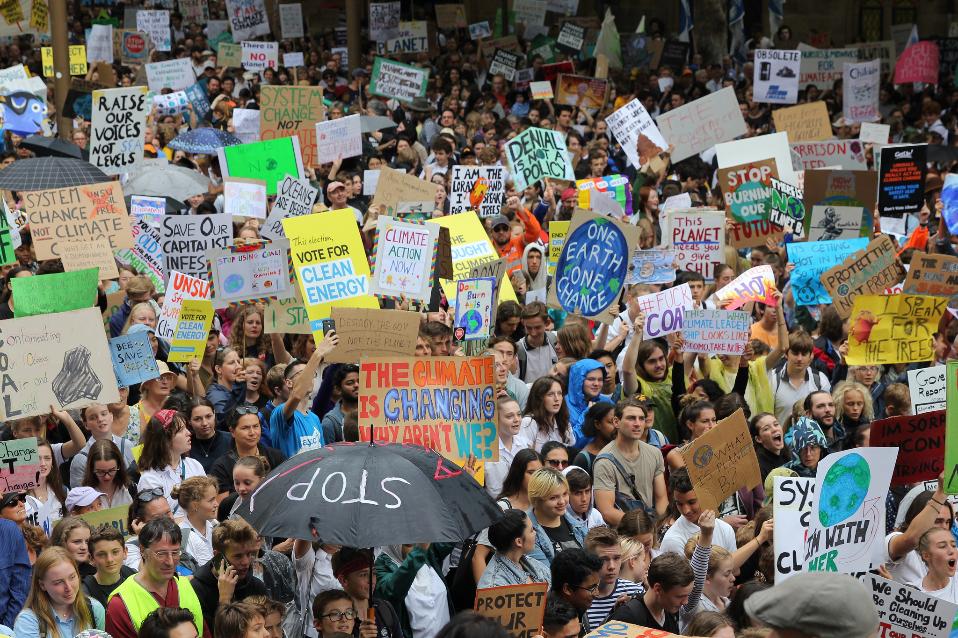 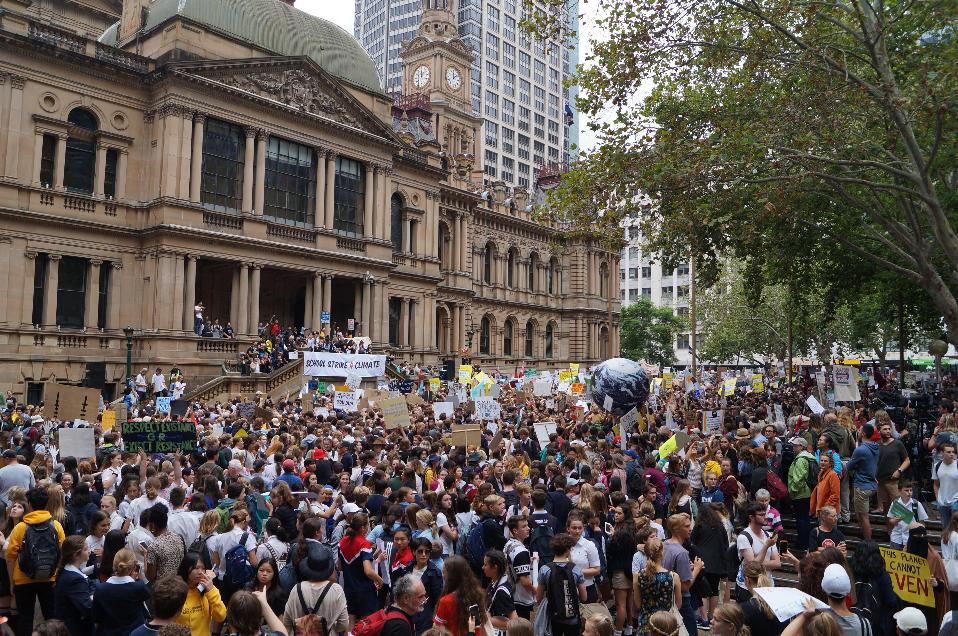 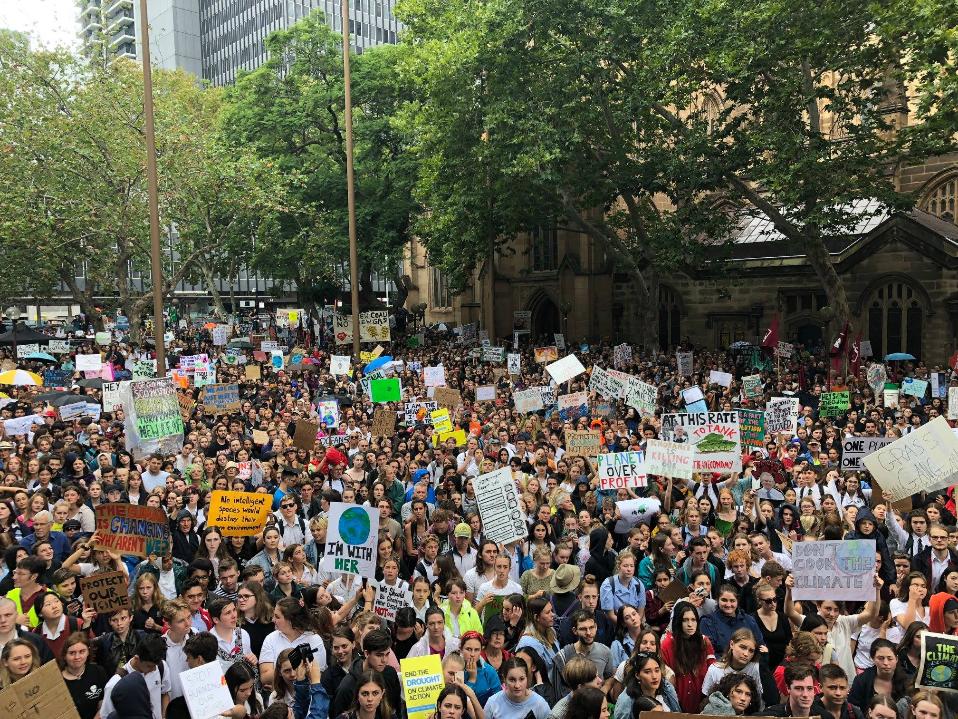 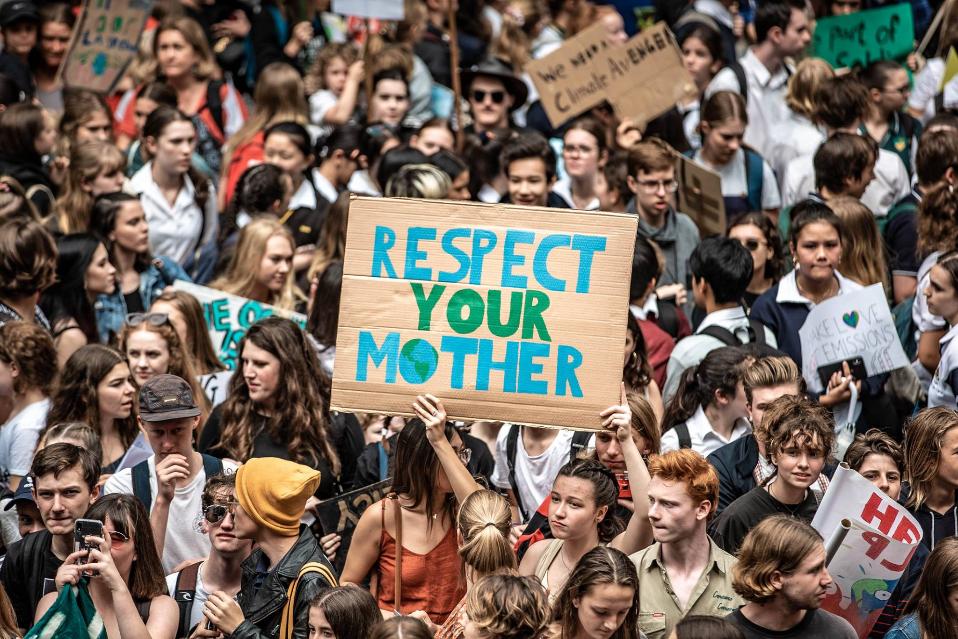 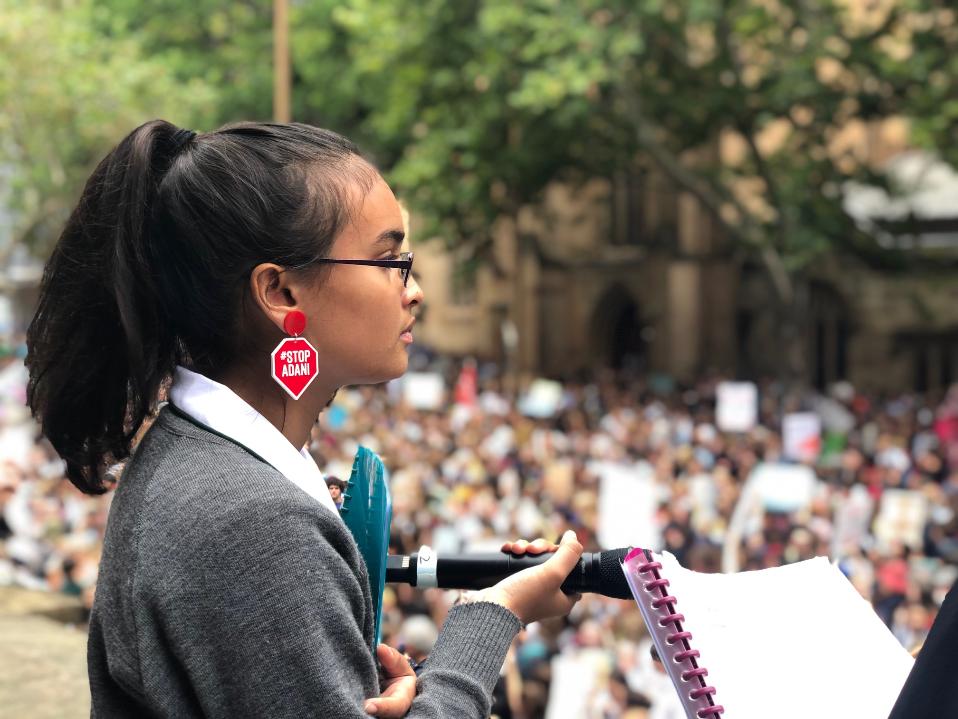 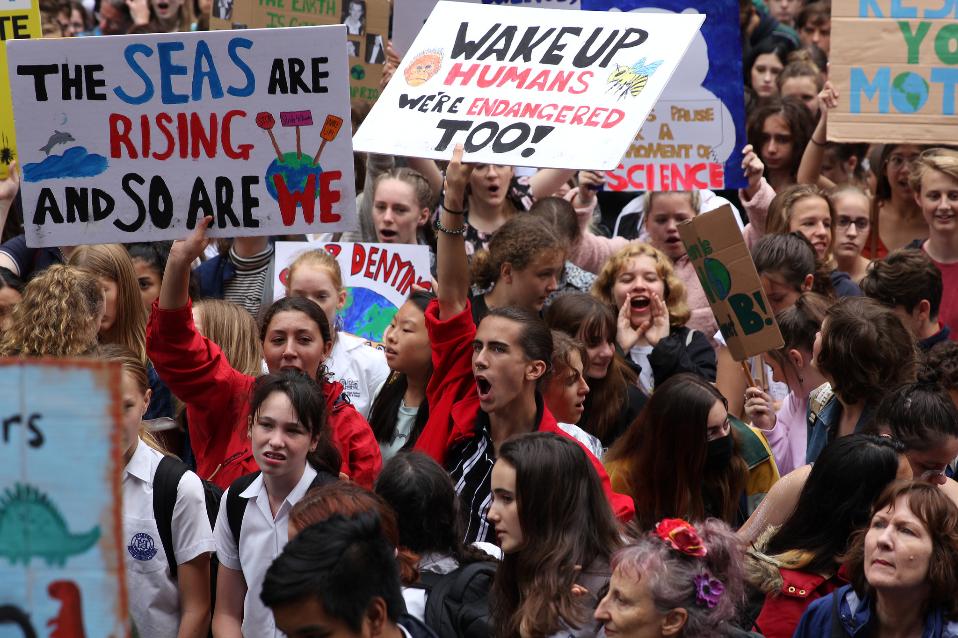 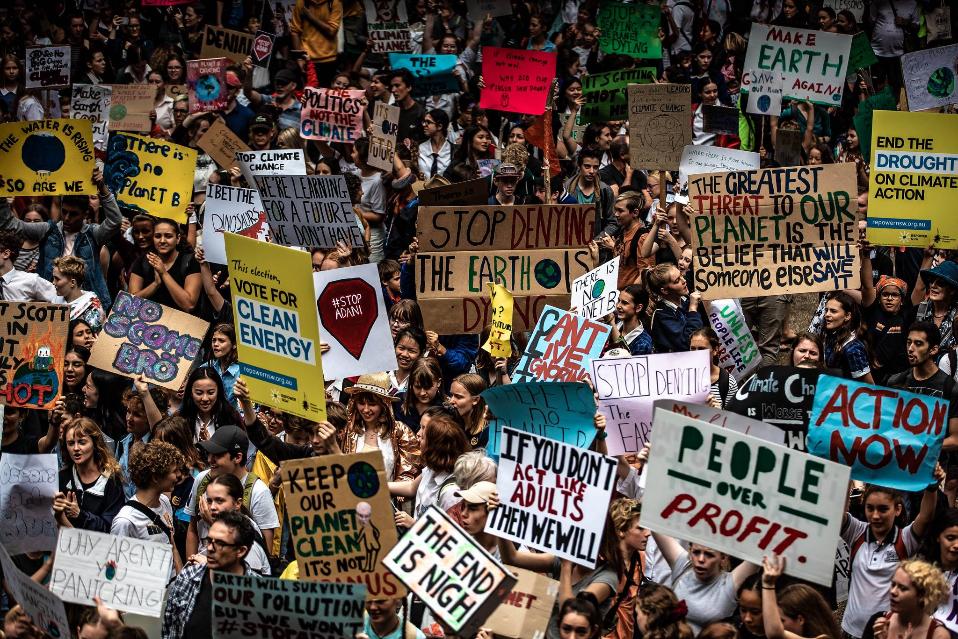 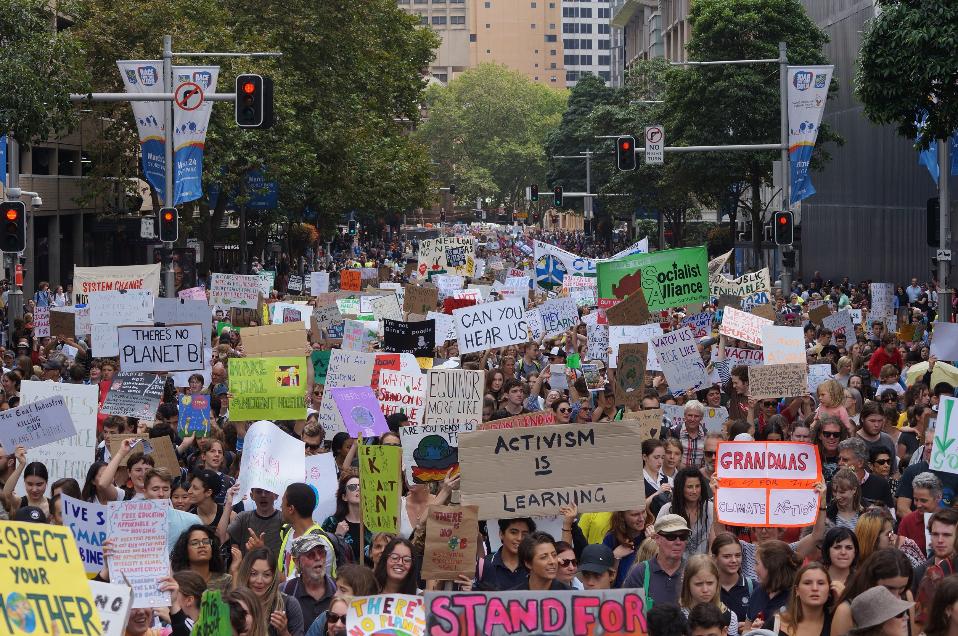 Report by A J Guesdon, photographs of Sydney Strike by and courtesy Lisa Ratcliff and SchoolStrike4ClimnateAction
Tweet