Protect Pittwater Year Ender - The Case Of The Missing Papers: Where To With The Pittwater Demerger?

Protect Pittwater Year Ender - The case of the missing papers: where to with the Pittwater demerger?

Pittwater locals have now experienced two and a half years under the Northern Beaches Council. And while the NSW government appears to hope the clamour for a return to our own municipality will die down - having lost a Pittwater demerger proposal with 3,500 signatures – its recent decision to act on proposals from other councils has raised hopes that we will be next.

Leading up to the March state election, all parties except the Coalition supported a plebiscite for demergers in all amalgamated councils across NSW. But with the return of a Coalition government, the road to Pittwater’s demerger was not going to be easy.

However, a process for demergers still exists under the Local Government Act – and our local demerger lobby, Protect Pittwater, had submitted a proposal for de-amalgamation to the former Local Government Minister Gabrielle Upton in May last year. The proposal followed the provisions of the Act and was accompanied by more than 10 times the 250 signatures required.

But despite numerous phone calls and Protect Pittwater having written to Ms Upton three times asking for an urgent response, the minister failed to make contact. With new minister Shelley Hancock in place following the state election, Protect Pittwater wrote once more - and received no reply, despite promises from staffers.

The story then took an unexpected turn. NSW Greens Upper House MP David Shoebridge followed the issue up at Budget Estimates in Parliament on September 26. He received the response that:

"OLG has no record of having received a de-amalgamation petition or supporting signatures from any part of the Northern Beaches local government area".

On November 4, Mr Shoebridge then asked a further question on notice:

“Why does this answer not include the Pittwater Proposal presented to the then Local Government Minister's staffer on May 15, 2018 that included over 3,000 signatures?”

The government replied on November 25:

“The Office of Local Government has again checked its records and has confirmed that it has no record of having received such a proposal.”

Protect Pittwater have ample evidence of the proposal’s presentation to the government, including footage from local filmmaker John Illingsworth. So it’s an open question as to why and how the NSW government could lose a document with signatures from more than 3,000 Pittwater locals. Is it incompetence or a deliberate strategy?

The push for demergers has been given wings by the minister’s decision last month to act on proposals to demerge from Snowy Valleys Council and Cootamundra-Gundagai Regional Council.

“I have listened carefully to the views of the community, the councils and local members in making this decision,” Ms Hancock said in a media release.

“The elector proposals have been initially assessed by the Office of Local Government against criteria under the Local Government Act and found to be valid. This included confirming with the NSW Electoral Commission that signatories to the proposals were enrolled electors.

“As required under the Act, I will now give public notice of the proposals to allow the councils and electors to make submissions.”

Other areas similarly disenchanted with their large amalgamated councils – such as Leichhardt – have also decided to push for demergers.

In Pittwater, gripes with council decisions are feeding discontent. Many locals were horrified by the council’s $13 million roll out of 330,000 new bins to homes in the new NBC area during June. Perfectly good and often new bins were simply collected and disposed of (although newer ones may have been recycled), to be replaced with smaller bins containing microchips to gauge the amount of rubbish within. Mayor Michael Regan justified the program as a way of providing a cheaper and improved service, with better environmental outcomes. ( SMH June 2019: '... Smart Bins a waste of Money...)

More recently, Pittwater residents have been appalled by the amount of concrete being laid for pathways and at Bilgola Beach, destroying the natural character of our peninsula – and all served up as a surprise to most locals without plans available on the council website. This has been epitomised by the council’s approach to the Coastal Walk – first established in 1988 as the Bicentennial Coastal Walk. The laying of a concrete walkway along Mona Vale golf course and directly across the dog park at Mona Vale Headland Park was the first assault. However, the recent concreting at Bilgola Beach and plans for a 3.5 metre wide concrete path on Bilgola Bends has caused local outrage – so that the council was forced to arrange a meeting with residents’ groups and others who had vocally opposed it.

Long-term planning is also raising red flags. The NBC has embarked on its preparations for a new Local Environment Plan to cover the Northern Beaches from Palm Beach to Manly – but instead of planning proceeding on a ward by ward basis, as Pittwater MP Rob Stokes had promised would occur, a council-wide approach has been taken.  While the processes behind this decision to create a council-wide Local Strategic Planning Statement - known as Towards 2040 – have to be questioned, what it has delivered is a document that fails to explicitly recognise Pittwater’s precious environment.

This raises serious concerns about the council’s ability in practice to protect habitat in bushland and residents’ backyards at the northern end of the peninsula. Protect Pittwater is worried that these natural treasures will not be safe because individual priorities have not been developed for each ward and we are in danger of development taking on a one-size fits all character.

Neither does the draft document provide details about other aspects of individual wards – such as housing. Tailoring the LSPS to specify needs and land use priorities on a ward by ward basis could have reassured residents that the final document and LEP would not simply be blueprints for intensive development and high-rise. That’s particularly the case for Mona Vale, which is classified as a “strategic centre” – along with Brookvale, Dee Why, Frenchs Forest and Manly.

Transport plans involving the B-line bus (including its extension to Newport and its privatisation) and lack of connectivity between local centres by public transport except for the privately-operated but highly-subsidised Keoride are other issues of concern to the Pittwater community.

As a result, the demand for an independent Pittwater Council remains – and if anything, the calls are growing louder. Ten days ago, Protect Pittwater wrote to Mr Stokes asking for an urgent meeting to discuss the whereabouts of our proposal. As yet, we have not heard back. But with frustration and anger over council decisions mounting in Pittwater, we will return to the fight in 2020. 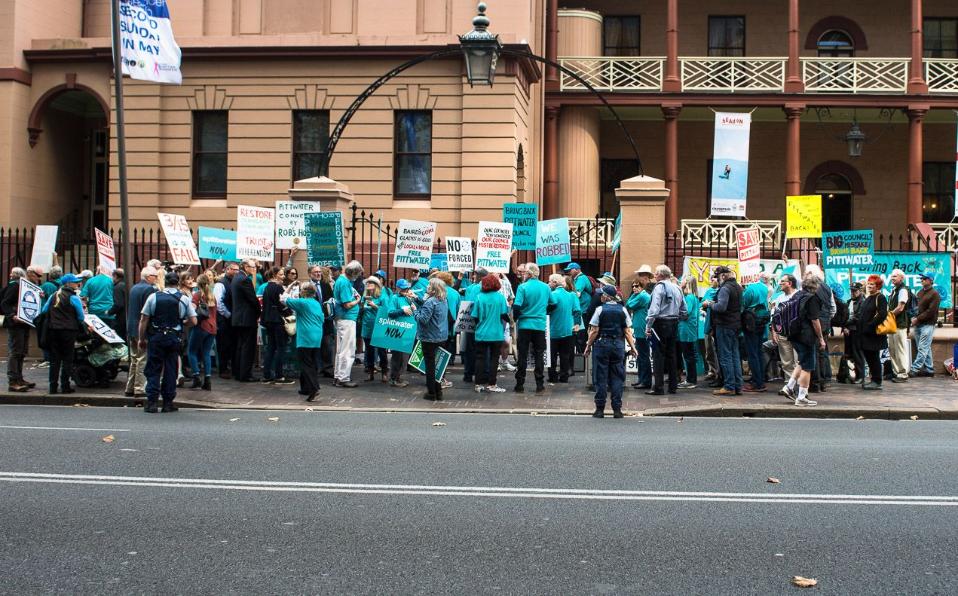