Commemorative Service for Victory in the Pacific Day – 15th of August, 2013 at Avalon Beach RSL

Over one hundred members of the Avalon Beach Sub-Branch, their partners and guests attended a lunch after the service. Mr Sloper extended a special thanks to the Club and staff for all their efforts again on this day.

The Commemorative Address was given this year by Neil Johnston and we are privileged to share and record this for you who could not attend;

Commemorative Address given by Neil Johnston

Five years ago the Chief of the Army. General Ken Gillespie AO, DSC, CSM made a Victory in the Pacific speech at the Kokoda Track Memorial at Concord. I thought I’d share his words with you today.

On August 15th, 1945, Prime Minister Chifley announced to the nation that the Japanese had agreed to unconditionally surrender, and as a consequence, the Second World War was over. Australians reacted to the surrender in a tremendous mood of joy, with spontaneous celebrations breaking out all over the nation.

For a jubilant Australia wildly celebrating on the 15th of August one thought was paramount. The war was over, but in the immediate aftermath of these celebrations, Australians began to appreciate, that because of the six years of war, the world has changed and Australia too was forever changed buy this most destructive of conflicts.

We gather here today to commemorate the end of the war in the pacific 68 years ago. Of the many occasions and anniversaries we commemorate in the course of each year, including those marking the conclusion of past conflicts, this one is of particular significance. The Pacific War was the first and only time on the short history of our nation when our territorial integrity was subject to threat, and when acts of war were carried out against our people on, and above, Australian soil.

VP Day is an important occasion for all Australians but it holds special meaning for those who endured the second World war, particularly for our veterans, those whose loved ones did not return or who were returned suffering grave physical and mental injury.

Today, as we reflect on the service and sacrifice of our veterans, we should take a moment to consider what it was they fought for 68 years ago.

While the early years of World War II in Europe and the Middle East brought little change to daily life for most Australian families, the bombing of Pearl Harbour in December 1941 signalled the start of Japan’s rapid advance through the pacific. The day after crippling the US Navy Fleet at Pearl Harbour, Japan landed its first troops in Malaya. A powerful Japanese offensive ensued and Australia hastily prepared for possible invasion.

With the majority of our 2nd AIF, Naval and Air Forces already heavily committed to Europe, the Middle East and North Africa, Prime Minister John Curtin decide to withdraw most of them to meet the needs of defending Australia.

In January 1942 the Japanese forces captured Rabual, the capital of the Australian controlled territory of New Guinea. Within weeks, Australian and Dutch forces had surrendered the island of Ambon in the Netherlands East Indies.

When Singapore fell on the 15th of February, 1942, 15, 000 men of Australia’s 8th Division were taken captive, which was the start of over three long years in captivity. The loss of Singapore meant the ‘Malay Barrier’ had been breached and Australia was in potential danger.

The war arrived on Australia’s shores on the morning of the 19th of February, 1942 with a devastating air raid on Darwin. Nearly 260 Japanese Fighters and Bombers attacked the port. They targeted the shipping in the harbour twice during that day, killing 252 allied service personnel and civilians. In succeeding months air attacks were made on many towns including Wyndham, Port Hedland and Derby in Western Australia, Darwin and Katherine in the Northern Territory, Townsville and Mossman in Queensland and Horn Island in the Torres Strait.

In May 1942 three midget submarines attacked Sydney Harbour, followed by several minor attacks on Australia’s southern coastline by conventional submarines. This included the shelling of Newcastle. In the following months, Japanese submarines sank six allied merchant ships off the east coast of Australia. Several more merchant ships were hit in 1943 and, in May of that year, 268 perished when the Australian Hospital ship Centaur was sunk in Queensland waters.

These attacks, and the Japanese landings in Papua New Guinea in July, led to most Australians feeling a great sense of peril. While debate today still questions whether the Japanese had really developed a coherent strategy to invade Australia, it would have been extremely difficult at that time not to imagine Australia being the next objective of the Japanese. The first sic months of 1942 were indeed a grim time for Australians and her Allies in the Pacific.

But in September of that year Australian Forces achieved something that no other Allied Force had yet achieved. At Milne Bay a combined force of Australian Army, Air Force and US Forces defeated the Japanese for the first time.

Victory here, and a few weeks later, the recapture of Ioribaiwa in New Guinea by the Australians on the 28th of September, marked a turning point. The seemingly ‘unstoppable’ Japanese had been stopped. This was an important psychological victory.

“Australian troops had, at Milne Bay, inflicted on the Japanese their first undoubted defeat on land. Some of us may forget that of all the Allies, it was the Australians who first broke the invincibility of the Japanese Army."

After the defeat of the Japanese at Kokoda and Milne Bay, Australian and American Units between November 1942 and January 1943 fought the Japanese in Northern Papua at Buna, Gona, Sanananda, Finschhafen and Wewak in a series of costly battles where no quarter was shown or expected. By early 1943 Allied forces had halted Japanese offensives in the Solomon Islands and New Guinea.

In 1945, Australian Land, Air and Sea forces launched coordinated  assaults against the Japanese at Tarakan, Labuan and Balikpapan. These were the biggest, most complex and the final Australian campaigns of World War II.

Preparations were then being made for what would have been an extraordinarily costly assault on Japan itself. However, with the atomic bombing of Hiroshima and Nagasaki in August 1945, the Emperor of Japan finally realised the futility of continuing the war and was persuaded to unconditionally surrender on 15th of August, 1945.

During the early years of the war, over 22, 000 Australian Servicemen and almost 40 Burses were captured by the Japanese. Most were captured early in 1942 when Japanese forces captured Malaya, Singapore, New Britain and the Netherlands East Indies. Hundreds of Australian civilians were also interned.

Although it is difficult for us to understand what these brave Australians endured, the fact that one third of our POW’s (Prisoners of war) perished in captivity is some indication of the appalling conditions they suffered. Most became victim of their captor’s indifference and brutality. Tragically over a thousand died when Allied submarines torpedoed the unmarked ships carrying prisoners around Japan’s wartime empire.

For Australia, Victory in the Pacfic Day ended six years of hardship, sacrifice and anguish. It heralded the start of what many people had hoped would be a new era of peace.

So in remembering the nearly one million Australian men and women who served, and the 40, 000 who died fighting to protect the freedom we enjoy today, it is worth refecting on the legacies of that great generation of Australians. 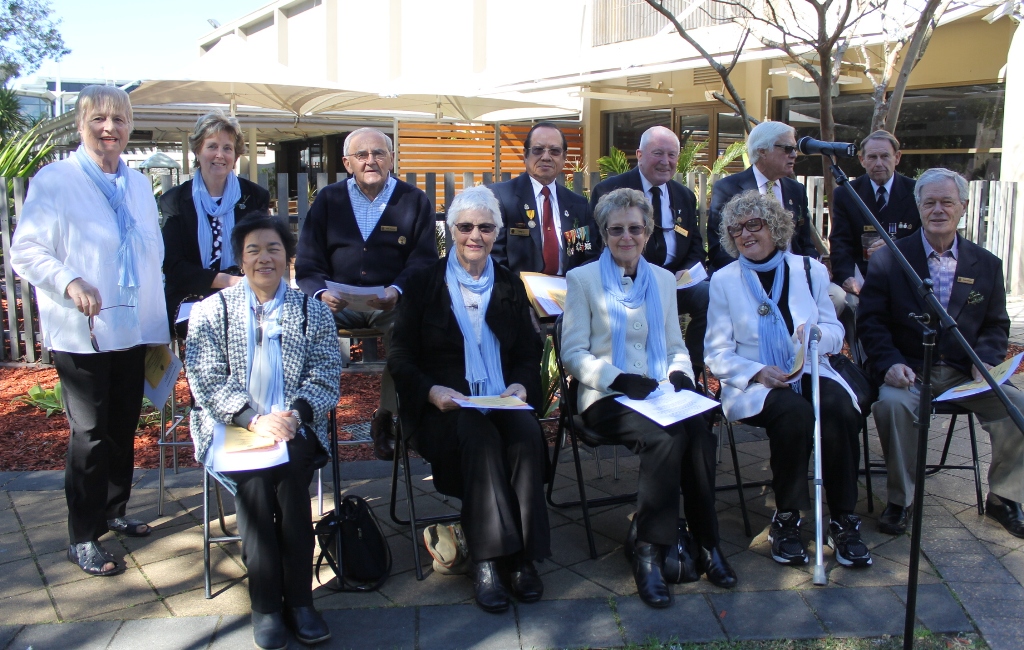 The Avalon Voices - led the hymns singing in fine form. 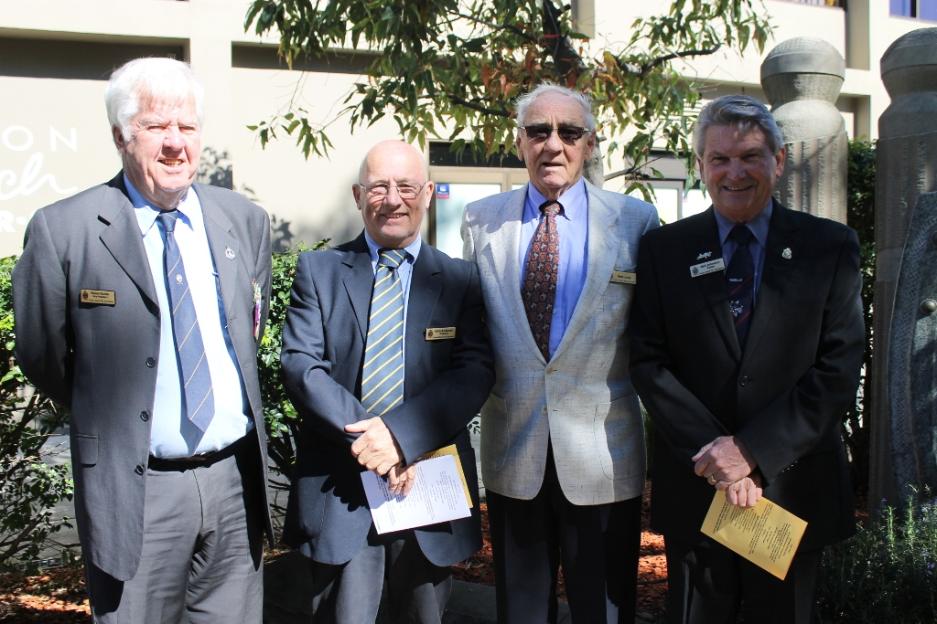 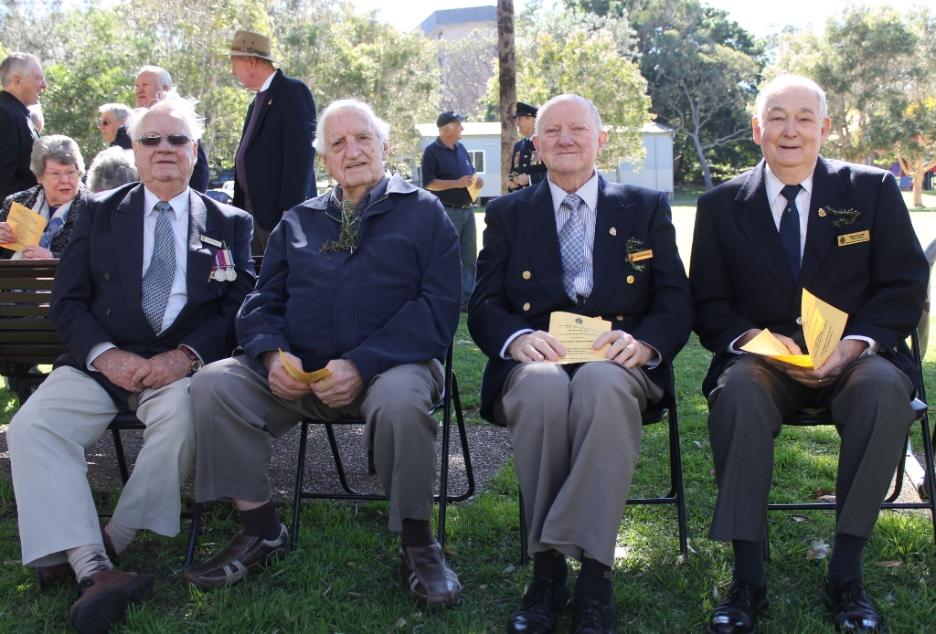 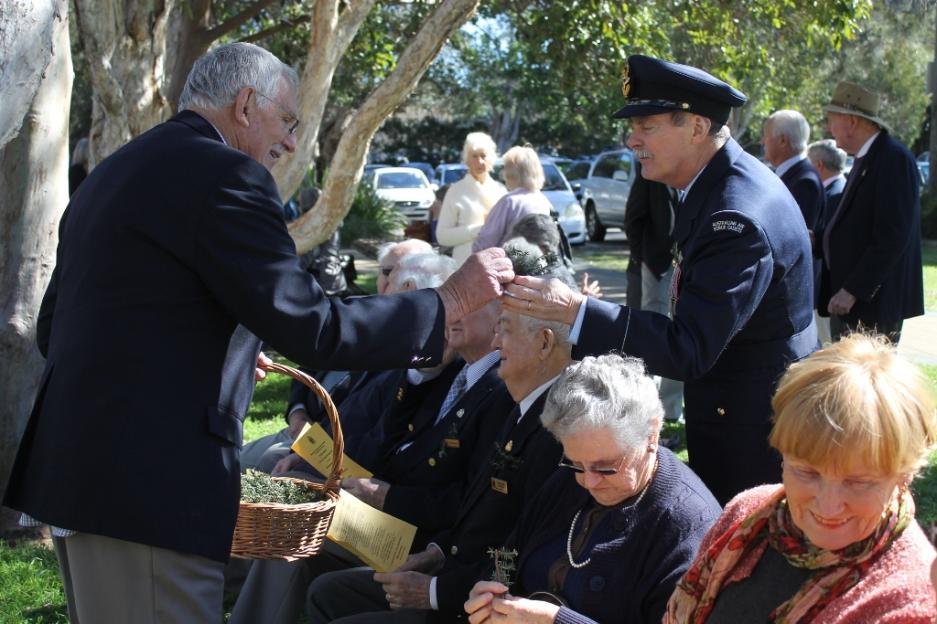 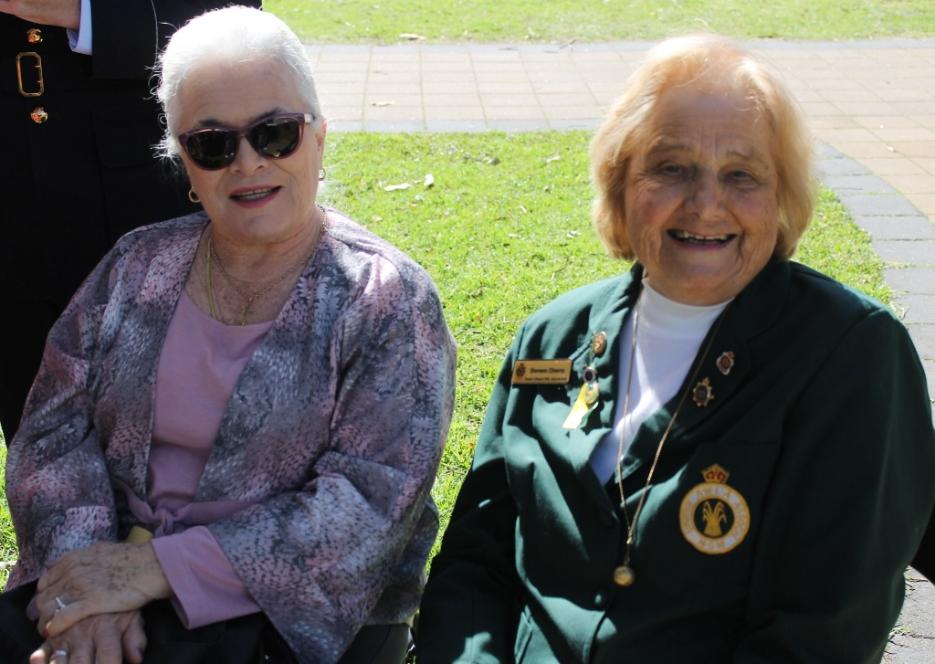 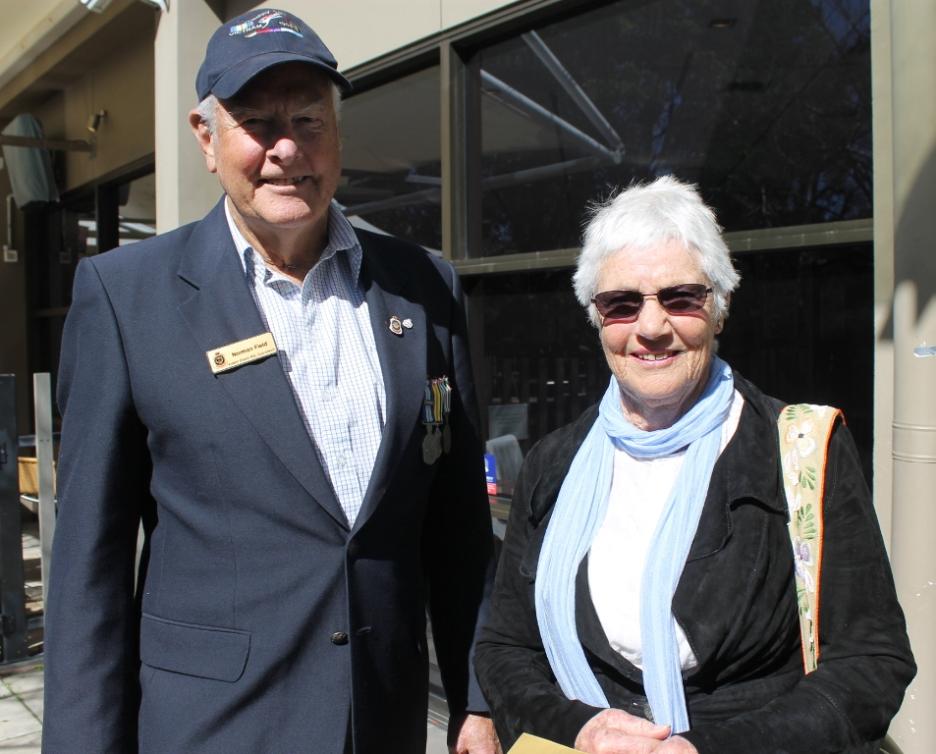 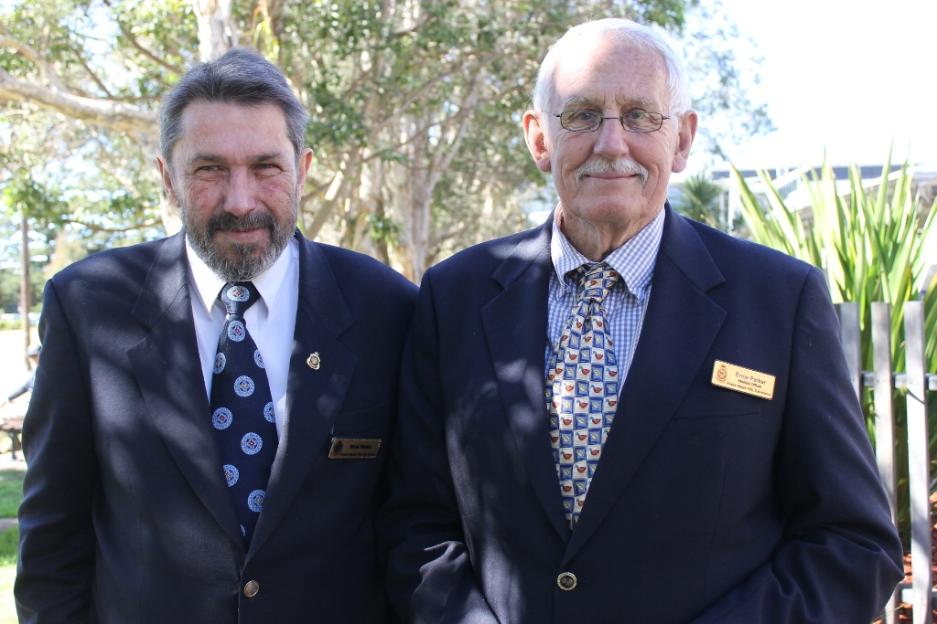 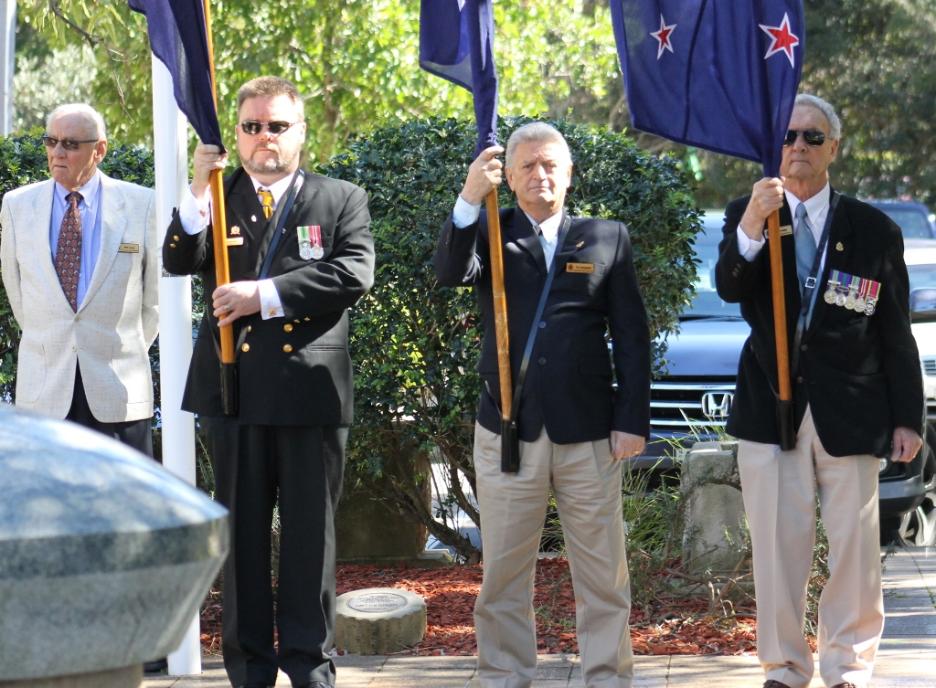 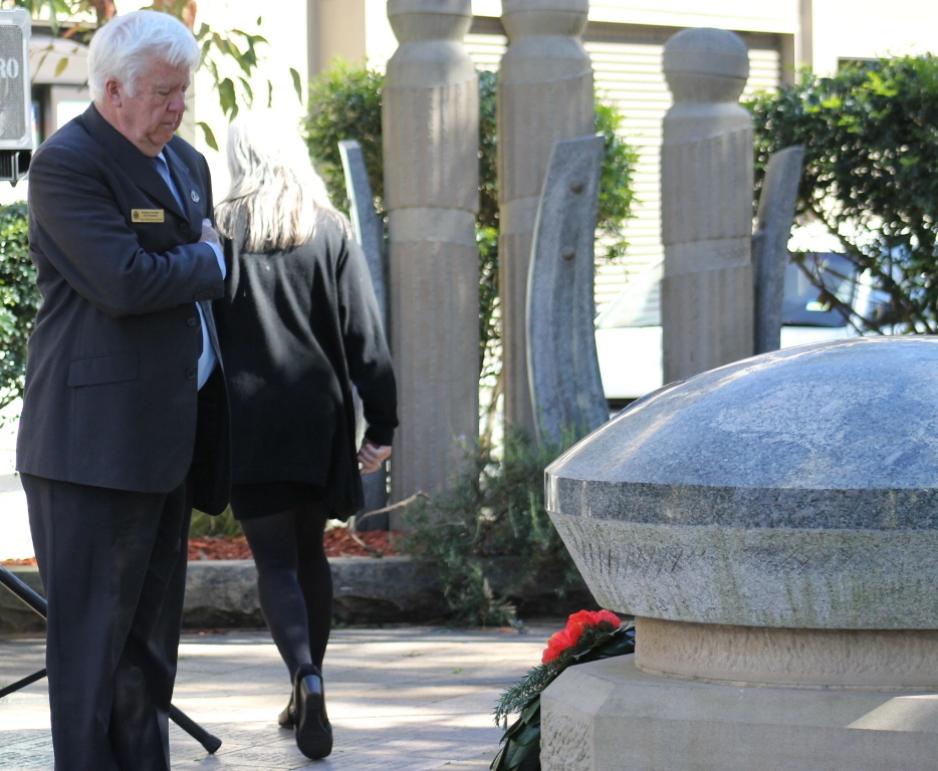 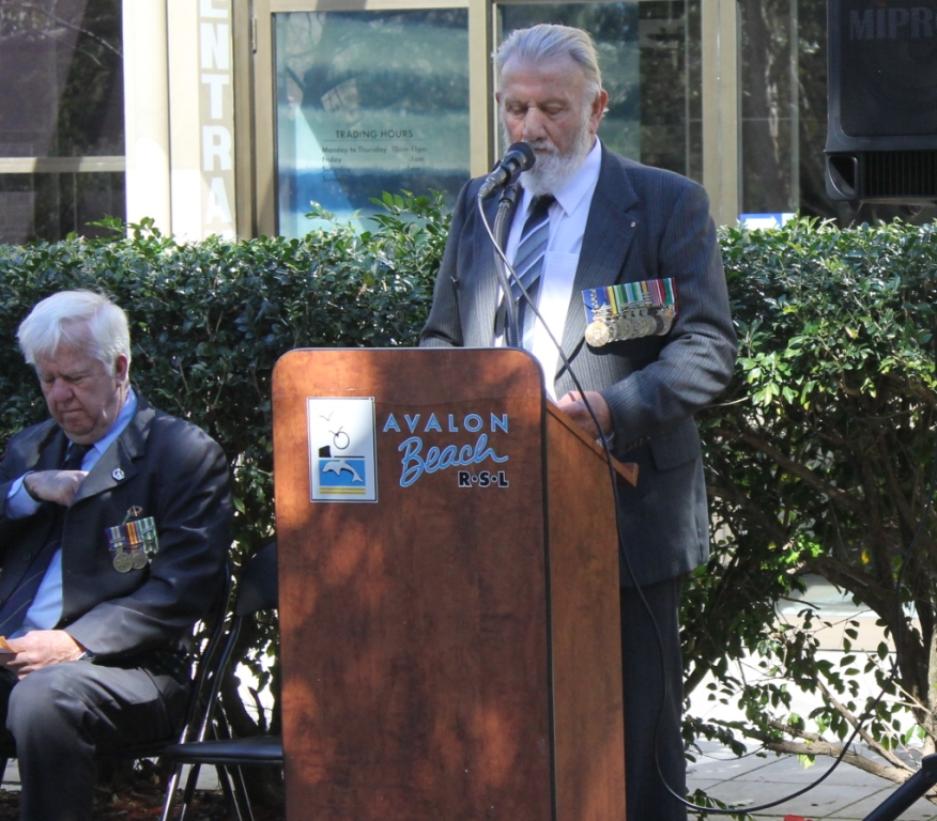