Face of the Extraordinary: Volunteers by Stephanie Brown

Stephanie Brown, organiser of ArtFest 2012 last year, who is a fantastic Portraitist and one of those showing 22 portraits of extraordinary people as part of Artspot 2013, currently open at the Avalon Recreation Centre until the end of today (13.1.2013) has also released a wonderful book, FACE OF EXTRAORDINARY: VOLUNTEERS.

Last Sunday (6.1.2013) an Author Talk on this work was given, allowing those attending to hear a few insights about this project.

Angelika Treichler, 'The Penguin Lady', who works trying to save Manly’s Little Penguin colony as a volunteer for Manly’s Environment Centre (www.mec.org.au ) stated to Stephanie on Sunday: “thank you for giving us, for allowing us, the volunteers, an opportunity of spreading our work a bit further.”

Penguins are dying in Manly due to plastic bags pollution, three died last week according to Angelika and once were being killed by dogs off leashes due to the carelessness of their owners until Manly Council built barriers the volunteers could close off at night and started a campaign of fines. Local police also frequent the area these lovely creatures dance in at night, to warn off roaming drunks. The Penguin Lady as Angelika is known is just one of those whose stories and portraits fill this book.

For over two years Stephanie Brown has worked on these individual portraits which began with wanting to do portraits of volunteer firefighters for The Unsung Heroes exhibition in Parliament House, Canberra. She arranged to travel to Victoria where a sister who is a volunteer with the Country Fire Authority (CFA) lives. In February 2009 the devastating Black Saturday bushfires occurred.

Stephanie states in the Introduction to her book:

“My resolve to go there and capture the essence of the courageous CFA volunteers grew rapidly. These were ordinary people, like you and me, except that they put their lives at risk to save the homes and lives of others in frightening conditions, without monetary reward. Their only defence against mother nature’s horrendous assault being pressurised water, sheer guts, determination and each other.”

During a trip into these blackened earths Stephanie met Sandra Douglas whose portrait makes the cover of this work one that sends a shiver up your spine every single time you gaze at it. Sandra, who is charge of the Poowong CFA unit, a small dairying town located in South Gippsland, Victoria which was at the heart of these people, animal and landscape killing fires is the essence of rural Australia itself. Sandra, along with Stephan Douglas, attended the Opening Night of Artspot 2013 wearing her CFA uniform and although clearly tired from the journey was welcoming, smiling and clearly proud of Stephanie and her work. She also reminded this country girl of what so many city folk don’t know; you can take the girl out of the country but you cannot take the country out of the girl. Sandra makes you homesick for all that is good and true and pure.

As Stephanie said in closing in reference to this wonderful folk: "Their compassion, their passion…they wear this on their faces. That is why they all look so beautiful and why they are The Beautiful People."

Lorrie Morgan, President of the Pittwater Community Arts, and one of the volunteers whose portrait and story is in this book, stated: “We need more volunteers in all walks of life...” exhorting those who are retired or have a passion for some area to follow this up and put themselves into what they believe in.

In the meantime, get yourself a copy of this wonderful book, make sure you get to Artspot 2013 today before it closes, and see these great portraits and all the other wonderful works on display.

FACE OF EXTRAORDINARY: VOLUNTEERS by Stephanie Brown is available at:

Portraits of 22 volunteers with each portrait 40 cm2, painted in oils and wax were produced over a two year period and will be on exhibit as part of the Artspot show in Avalon Recreation Centre, 5-13 January.

Stephanie has also written a book, Face of Extraordinary: Volunteers, which will launch alongside the Artspot exhibition featuring an author talk on Sunday January 6th 11am at Avalon Recreation Centre. The book combines the portraits and personal stories of many volunteers who work for various non-profit organisations and groups in the Northern Beaches area.

The project intends to celebrate the ordinary people in our community who make an extraordinary difference to the lives of others. It is also hoped it will generate awareness of the volunteer’s dedicated causes, inspiring others to become more active in their community or support one of these admirable volunteers. The volunteers are often quiet achievers that go about their day assisting others less fortunate or able; in distress; or requiring assistance and guidance to rebuild their lives.

Stephanie Brown is a full time artist, teacher and a committee member of Portrait Artists Australia. She currently has a portrait of Mona Vale local, Dr Howard Ralph, exhibiting in Parliament House, Canberra. Dr Ralph is also one of the extraordinary volunteers featured in this project. Stephanie has been selected as a finalist in many Australian portrait awards including the Black Swan Prize in Perth for her portrait of inventor, Sam Kutner OAM, and also the Archibald Salon de Refusès for her depiction of Sydney Morning Herald journalist, Adele Horin. Other finalist entries include the Shirley Hannan Portrait Prize and Mortimore Art Prize.

Artspot art exhibition features 17 artists ranging from emerging and professionals to two international guests from South Africa.   An array of artworks is on show including paintings, print works, ceramics, photography and sculpture. 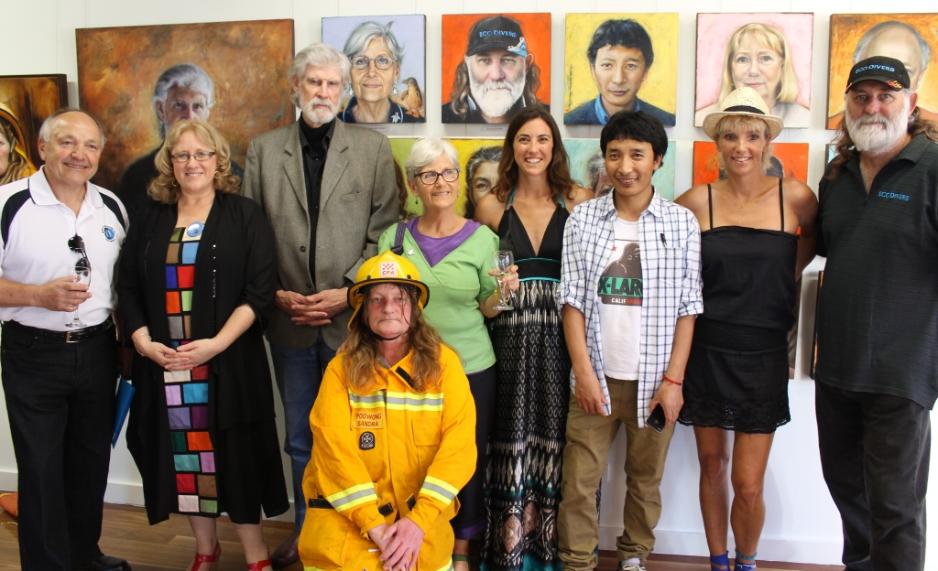 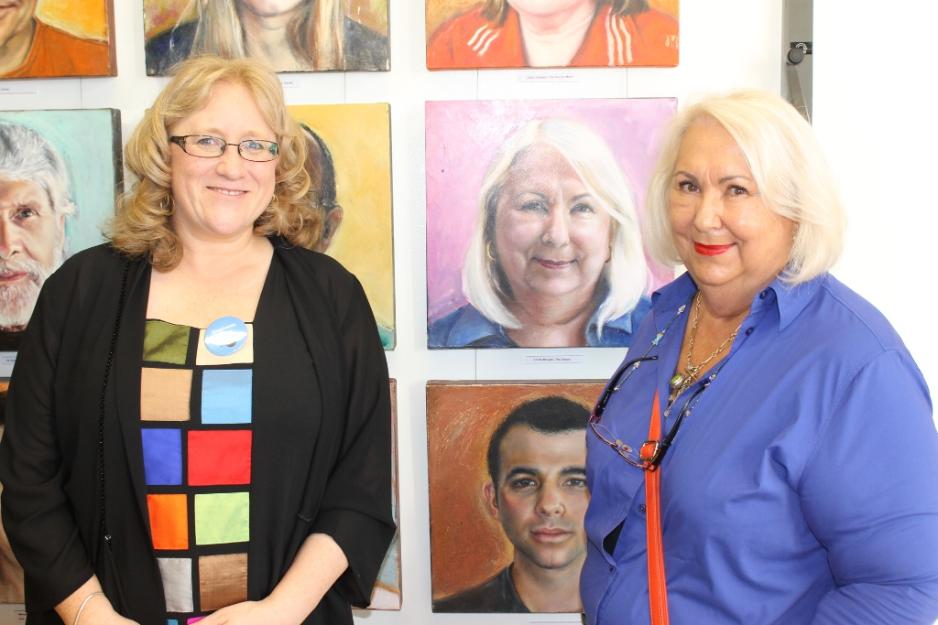 Stephanie Brown and Lorrie Morgan with Lorrie's portrait behind them.