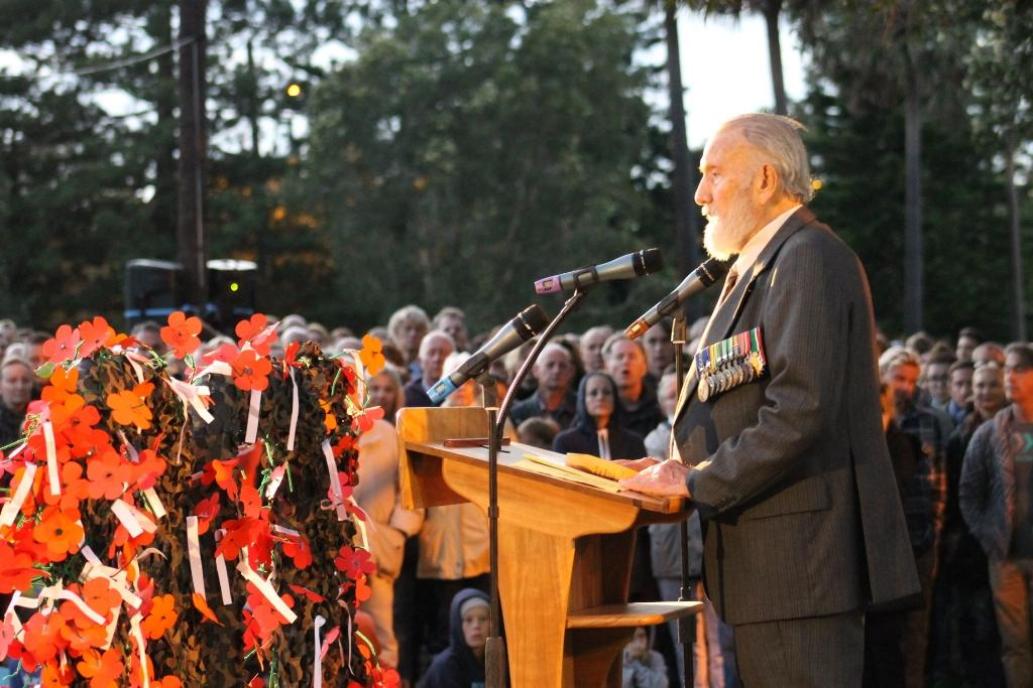 Commodore Graham Sloper, President of Avalon Beach R.S.L. Sub-Branch, conducted both the Dawn Service and the Commemoration Services this year. Commodore Sloper, one of around 20 volunteers who worked hard to ensure the success of the ANZAC Centenary Commemoration Service - Warringah and Mackellar Federal Electorates held on April 19th, read the following soon after 5.30 am:

Anzac Day is a time to think of those servicemen and women who have served our country and of those who have laid down their lives to defend the freedom we enjoy today.

In the early hours of the 25th April 1915, Australian and New Zealand troops along with others from the Commonwealth and Allied forces clambered into boats to be towed by naval launches to Gallipoli. This was the beginning of the ANZAC tradition and marked the coming of age of Australia and New Zealand as nations.

As the legend of ANZAC grew, the qualities of the Australian soldiers were recognised: courage, discipline, endurance, humour, initiative and perhaps above all, comradeship, which Australians call "mateship"; the unspoken, unbreakable creed, "stand by your mate".

Today we remember those who fell serving or who served our nation in World Wars 1 & 2, in Korea, Borneo, Vietnam, Kuwait, Somalia, Cambodia, Rwanda, the Middle East, East Timor, Bougainville, the Solomon Islands, Pakistan, Bosnia, Afghanistan, Iraq and in peacekeeping, sanctions and border control operations. We also remember our friends and allies who have fought alongside us through all these campaigns.

Our Service men and women have left us a splendid heritage. We remember them with pride and may we and our successors prove worthy of their sacrifice.

At both ANZAC Day 2915 Commemoration Services the President of Avalon Beach R.S.L. Sub-Branch reiterated the bond between Australian and New Zealand service people:

“I would like to add an acknowledgement that New Zealand and Australia have always punched above their weight. When you consider that two of the smallest nations in the world provided so many service people, and have lost over 120 thousand people in service, you understand why our service men and women can stand tall among nations.”

Commodore Sloper has always placed an emphasis on engaging our community in understanding and participating in Sub-Branch services:

“Fifteen years ago when I began as President at Avalon Beach RSL Sub-Branch I began to visit schools we were invited to in our area to speak about ANZAC Day and what it means. When we first began this there was only one school that would have an ANZAC Day service and now every school in the area has an ANZAC Day Commemoration Service.

When I visit these schools one of the aspects I try to reinforce is that during my almost 50 years in the Navy I didn’t meet one person who wanted to go to war. We are there, in terms of political talk, as a credible deterrent. I relate this for the children as threats being the equivalent to bullying; no one likes a bully.

So if you don’t want to have a bully in the schoolyard, the bully has to know that you will stand up to them. To me that is what the Australian Defence Force is about.”

Barrenjoey High School students made the 100 year poppy display placed below the podium for this year's Services, each handmade flower with a ribbon on which were the names of people who had served in the First World War.

The ANZAC Day 2015 Avalon Beach R.S.L. Commemoration Address was given by The Hon. Robert Stokes – Member for Pittwater, NSW Minister for Planning:

Today has special poignancy, exquisite poignancy, because it represents the Centenary since that fateful Sunday precisely one hundred years ago when the first Australian soldiers set foot  on what is now known as Anzac Cove, initiating what has become known as The Gallipoli Campaign, the first step in unleashing an awesome devastation on this nation, and part of a conflict so awful that it is known as ‘The Great War’.   A war which ultimately saw more than 60 thousand Australian men and women give their lives in service for their nation. The statistics are so incredible and so awful that they are almost incomprehensible in scale.

For a nation of just four and a half million people, for 330 thousand people to serve overseas and more than 60 thousand dead, a loss or a contribution greater per capita than any other nation in the world., contributing to more than one million British Commonwealth dead, is a toll so horrific that it is almost unintelligible; it’s almost beyond understanding.

And that brings with it great risk, that in not understanding, that we forget. That is why it is so encouraging to see so many of our citizens out to remember and to pay our respects to our noble dead and to all of those who served.

But ladies and gentlemen, though those statistics are daunting and depressing, there are many tangible reminders in our community that ti us to our legacy of loss and of what we must be grateful for.

From World War I, if you travel up the Hawkesbury River, in the mangroves on the northern side of the river you can see the remains of HMAS Parramatta, a vessel that saw service during the First World War.

From the Second World War there are many tangible reminders in our bushland. If you go into the mangroves around Bayview you find the tank traps that were built to stop a threatened and feared Japanese invasion. The proximity of that Japanese invasion itself is very clear from the fact that you can go up Mona Vale headland and see the Memorial there that points out the location of the Japanese midget submarine off Bungan Beach.

Those from the West Head Awareness Team led by Rohan Walter have done an incredible job in clearing the bushlands so that we can see the fortifications built at West Head, also part of the fabric of war here in Pittwater.

And from Vietnam, that familiar whirr, the two bladed air cut of the Huey belonging to Pat Soars can often be heard in the skies above Pittwater.

But beyond those reminders in bushland and water and in the air there are the memorials themselves; those silent steles of stone as they stand sentinel in our towns up and down the peninsula. From Palm Beach, here outside the Avalon Beach RSL in Dunbar Park, the Memorial at Village Park in Mona Vale, Trafalgar Park in Newport and also outside the Fire Station at Narrabeen. Etched on every one of these Memorials are names, names of local men who served and many of whom died. Behind each of those men is a story, a story of loss, a story of sacrifice and a story that’s etched in the lives and the legacies of countless families that still live here on the Northern Beaches of Sydney.

Just to pick out two of those names; Captain Francis Coen remembered here at the Avalon Beach RSL Cenotaph and Private Harry Kuhlmorgen, memorialised on the Memorial at Village Park Mona Vale.

I notice that both these men coincidentally served in the same unit, the 18th Battalion of the Australian Imperial Force. Both men set sail for Gallipoli in May and then June 1915, both men saw service throughout the conflagration on the peninsula and then went to France.

Both men fell at Pozieres, just three days apart from one another.  Private Harry Kuhlmorgen was killed on the 25th of July 1916 and his remains lie in the Gordon Dump Commonwealth War Cemetery in France. Captain Francis Coen, his remains have never been found. His memory is recorded on the Menin Gate in Belgium as well as at the Villers-Bretonneux Memorial in France and right here, in Avalon.

They are just two names ladies and gentlemen, boys and girls; two names that provide a glimpse into a story of sorrow and a story of loss.

But we have amongst us today living reminders of sacrifice and of service in time of war, in time of national emergency, and in peace-keeping operations.

To the Service women and men amongst us today; all of us are here for you, we thank you, we owe you an indescribable debt of gratitude and today is our day to say ‘thank you’ for your Service. So on behalf of everyone here, on behalf of the people of Pittwater, we want to express our gratitude for the service that you have provided to our nation.

Men and women, for example ladies and gentlemen, like Tamara Sloper Harding. Tamara served with the Royal Australian Navy  in Timor Leste and continues to serve the community of Timor Leste as founder of the Pittwater Friends of Soibada.

There are so many stories here today of such incredible service, and we owe all of you an incredible debt of gratitude.

Ladies and gentlemen, boys and girls, this morning the Mayor and I had the opportunity to attend a Service at the Pittwater RSL Club and there was a verse read out there that struck me as it’s a feature of so many ANZAC ceremonies across the nation. It is a verse from the Gospel of John, which says simply “Greater love has no man than this, that a man lay down his life for his friends.”- John 15:13

It is an inadequate word that has been best described by C S Lewis, a Professor of English Literature at Oxford University when he said that the word is bets understood by its four Greek meanings.

There is a Greek word to describe the love of family, there is a Greek word to describe the relationship between lovers, there’s a Greek word to describe mateship or the love of friends. But there is a final Greek word which is perhaps the greatest human understanding of ‘love’; ‘agape’  - and agape is a love of sacrifice, it is a love of others, and it is a powerful love indeed. And it is that love that we remember today, the service and sacrifice that has been provided, of more than 100 thousand Australian men and women who have paid the ultimate sacrifice to keep us safe, and to provide us with an inheritance and with a future. It is an incredible inheritance for us to share and it brings with it an awesome responsibility for each and every one of us.

There has been some debate recently as to whether we should be compensated for the fact that ANZAC Day falls on a Saturday by providing us with a public holiday on Monday. I believe that completely misunderstands the importance of ANZAC Day.

It is also a day when we can reflect how we can show ourselves worthy of our inheritance – how can we in our lives demonstrate just a tiny portion of the agape love, the self-sacrificial love that has been shown to us.

So ladies and gentlemen, boys and girls, let’s just use some of today to reflect not just with gratitude on the love that has been shown to us by the ANZACs and their descendants, but us also use that to consider how we might act in our lives to serve others.

The service was conducted by Commodore Graham Sloper, President of R.S.L, Sub-Branch

The Catafalque Party was formed from the

We remember with deep respect members of Avalon Sub-Branch and the Avalon R.S.L. Club who have passed on since our Dawn Service of last year.

The Catafalque Party and Honour Guard was formed from 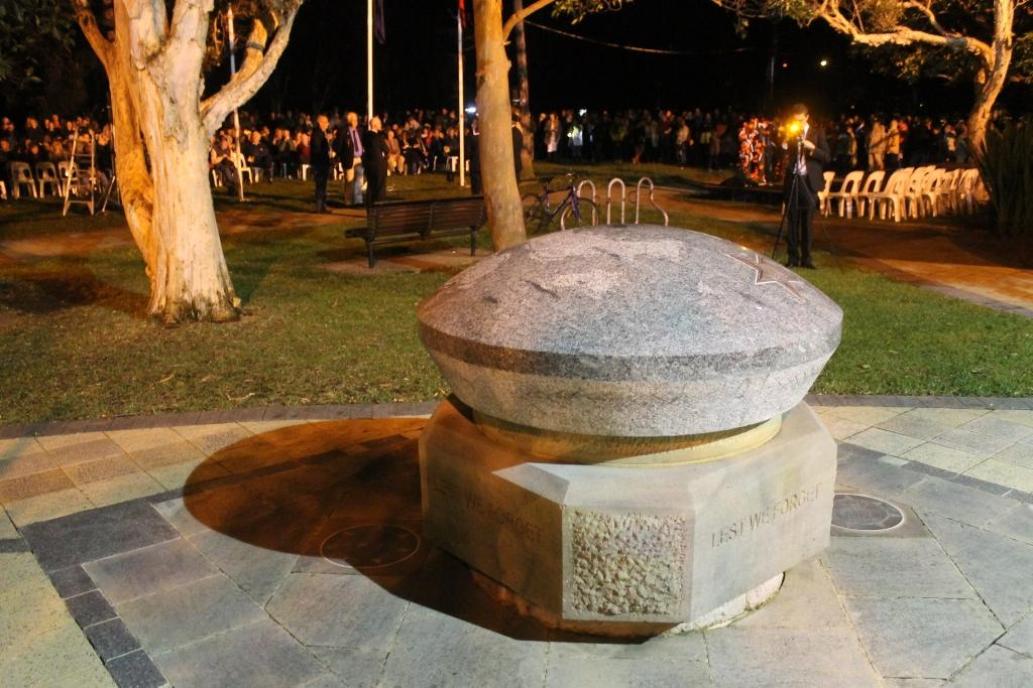 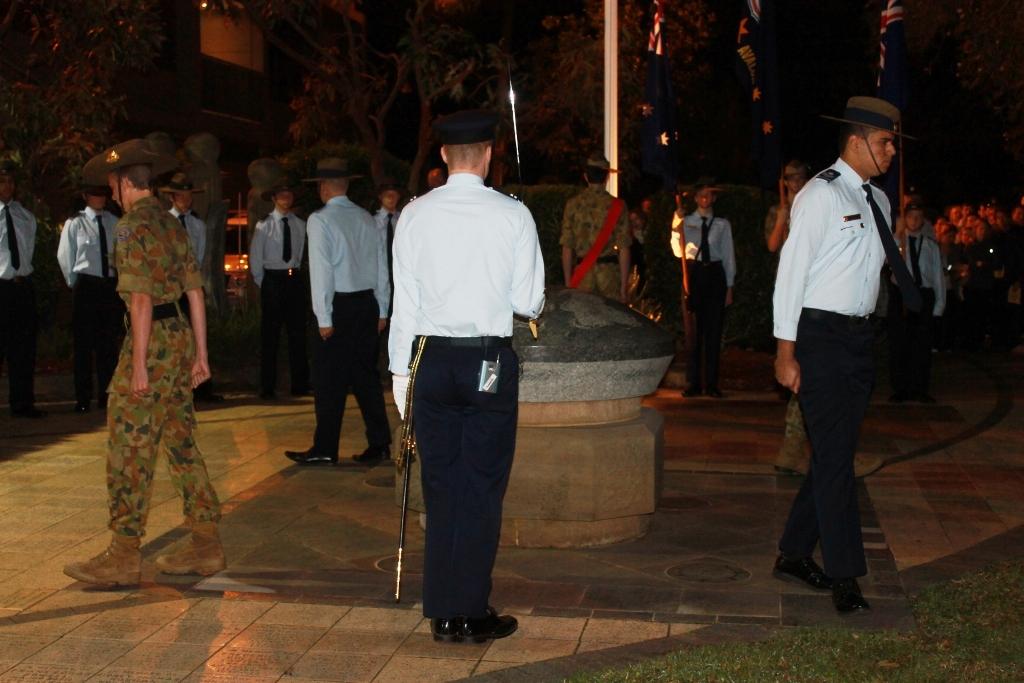 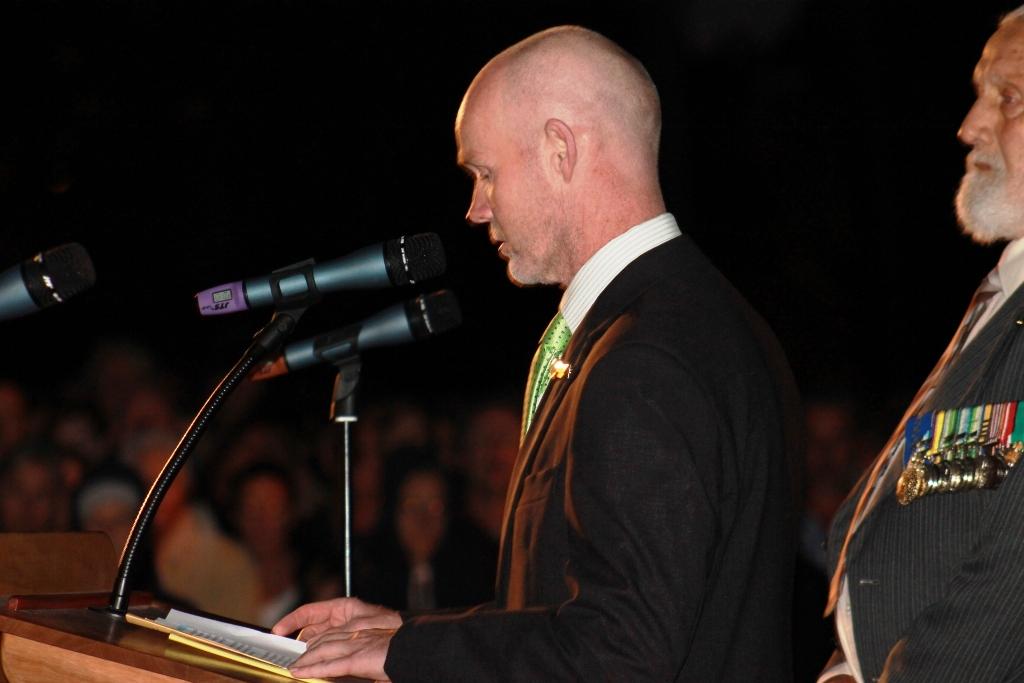 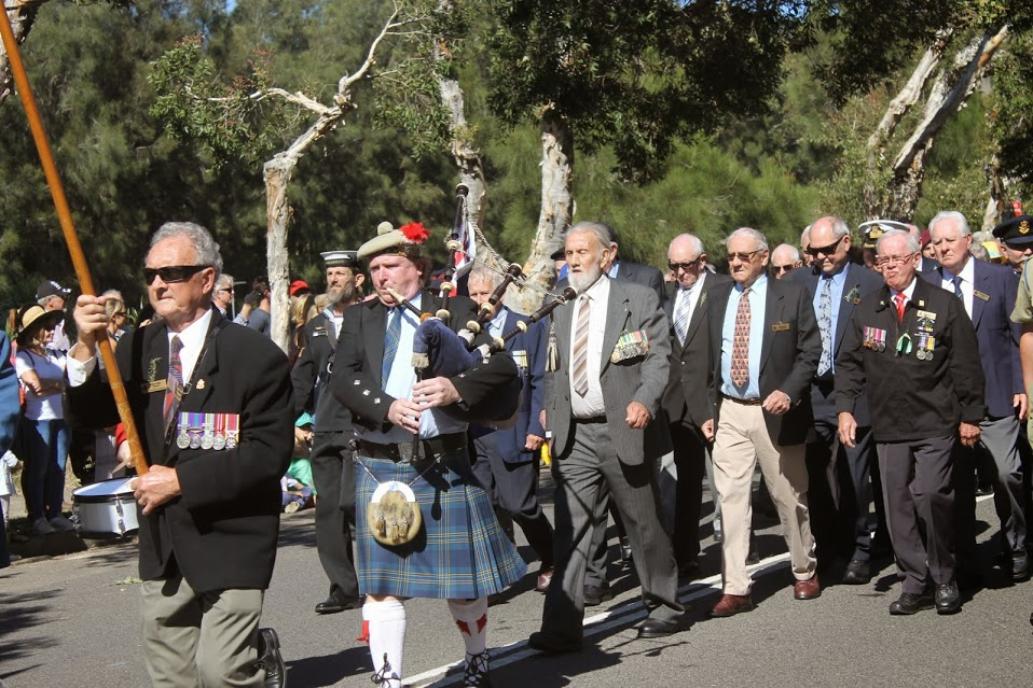 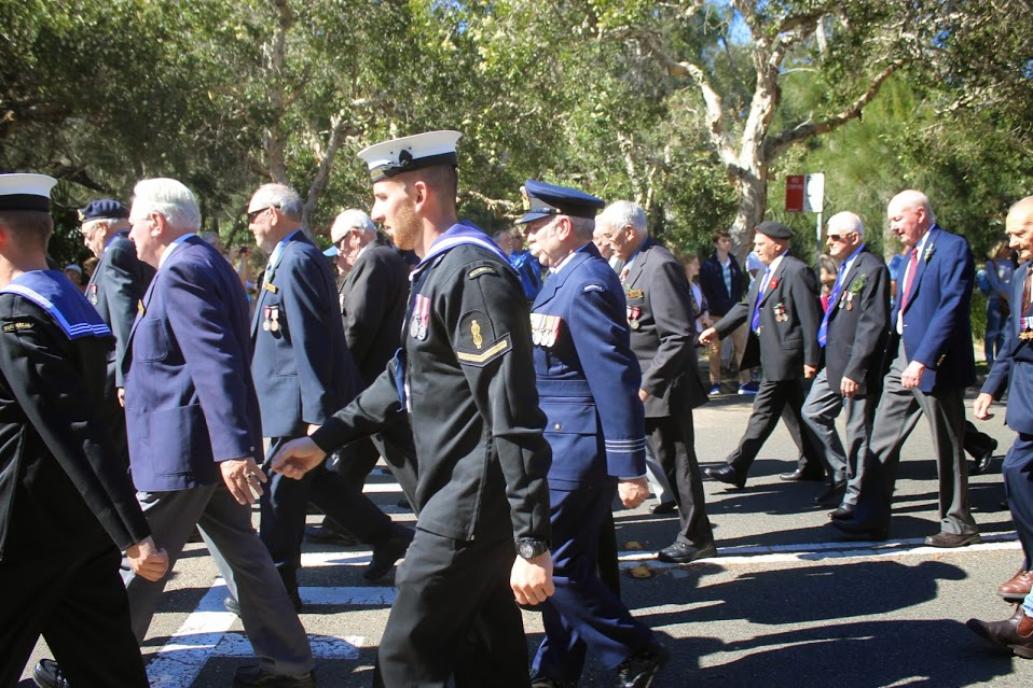 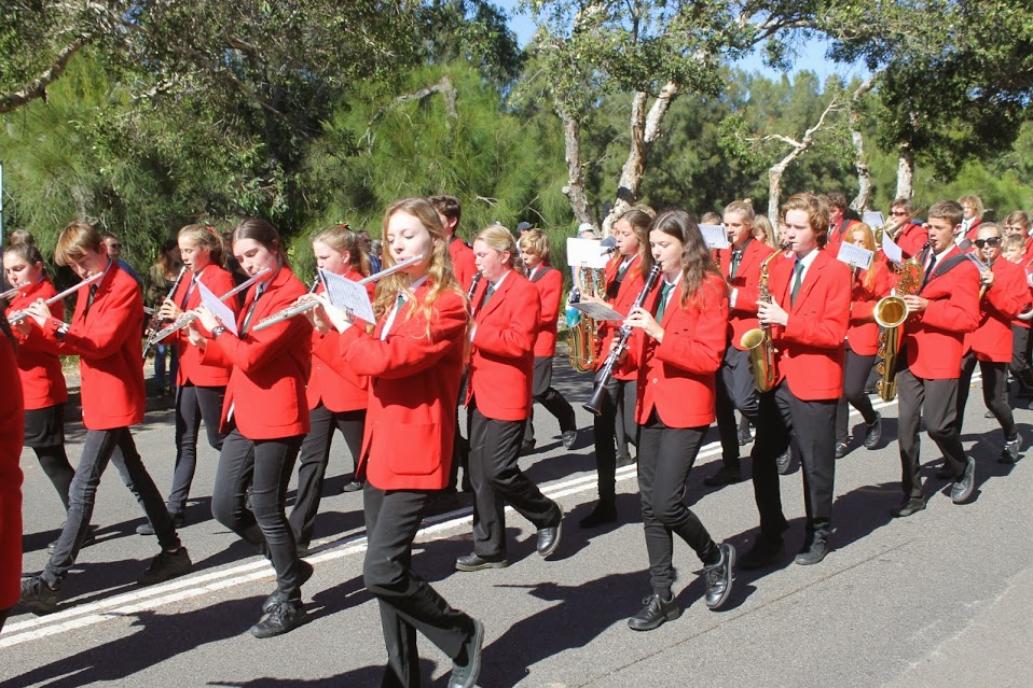 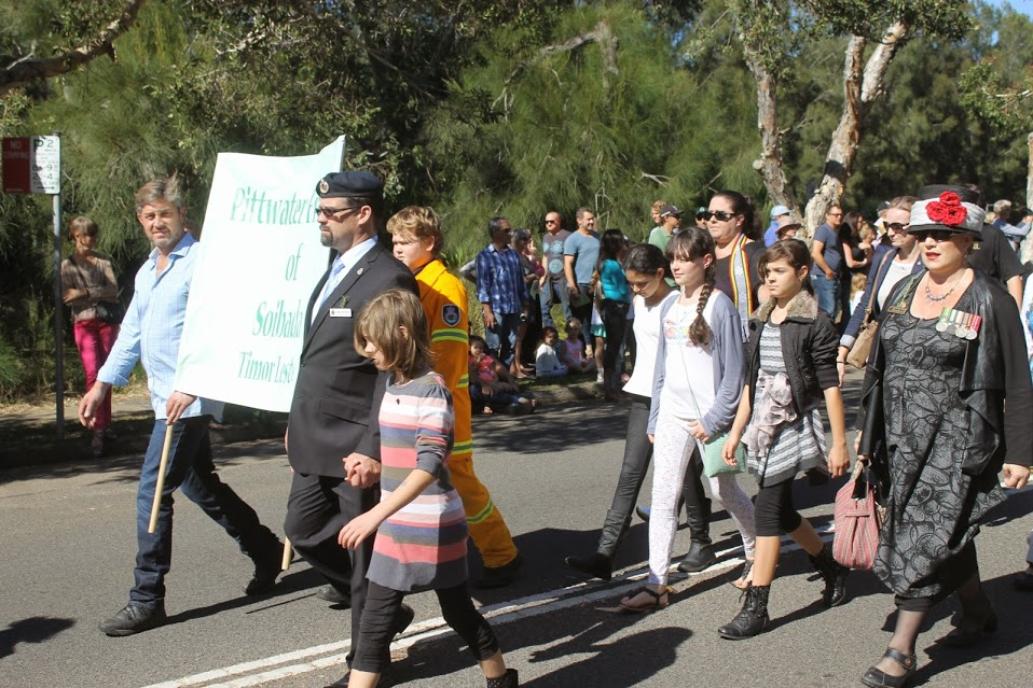 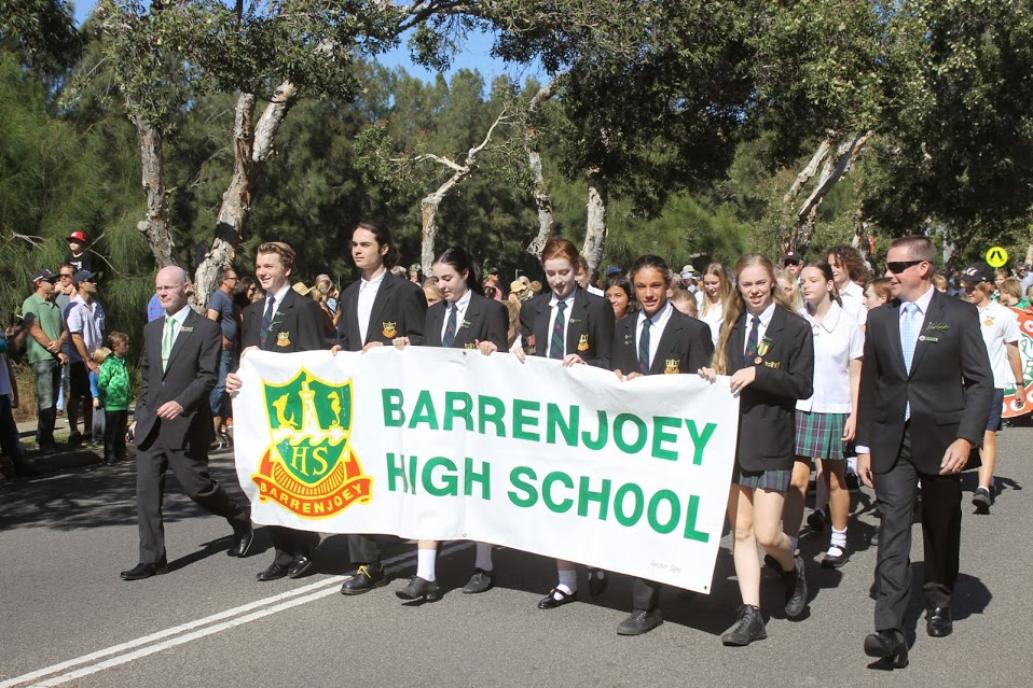 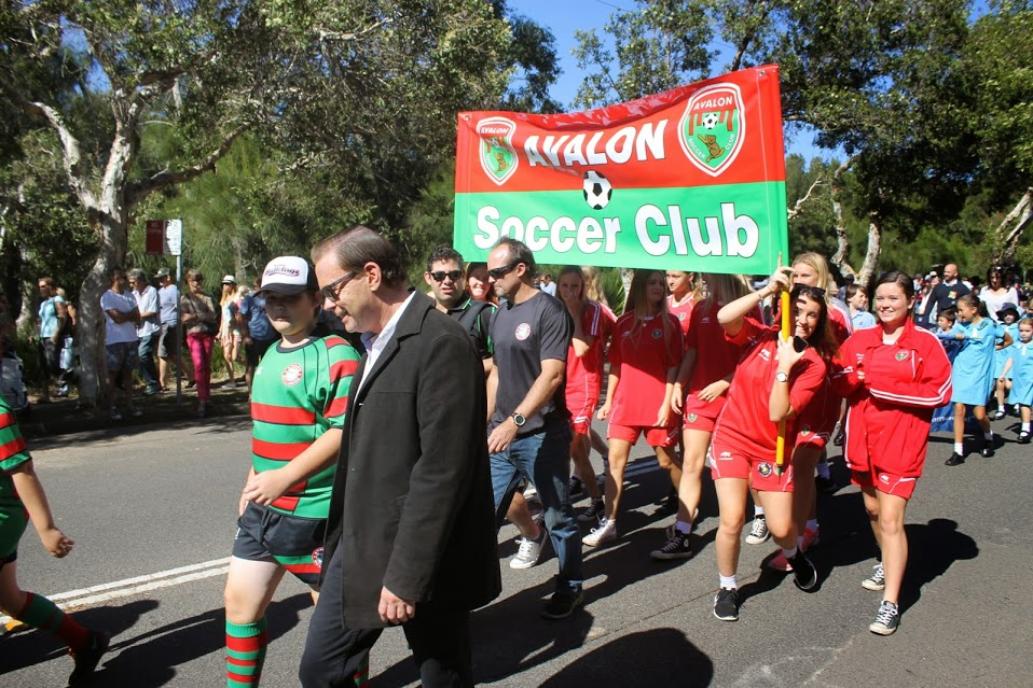 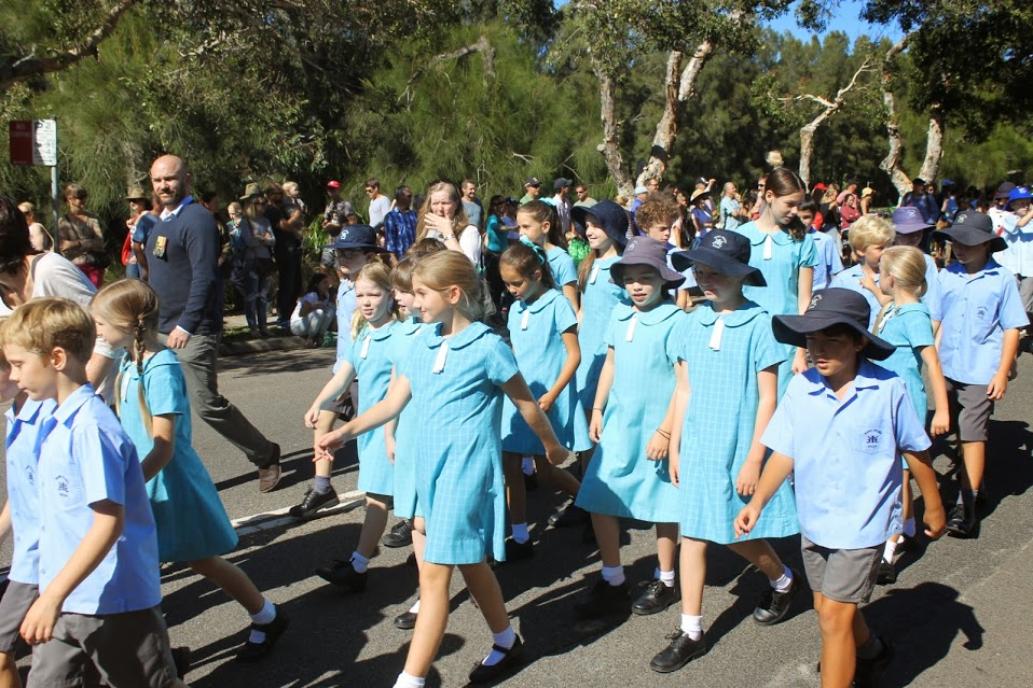 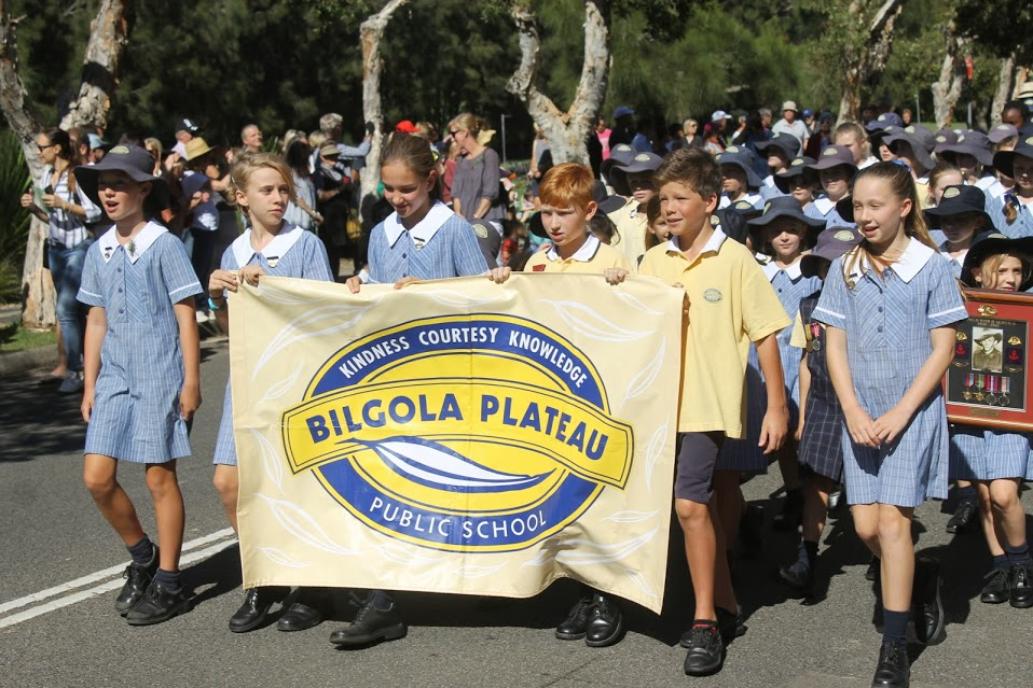 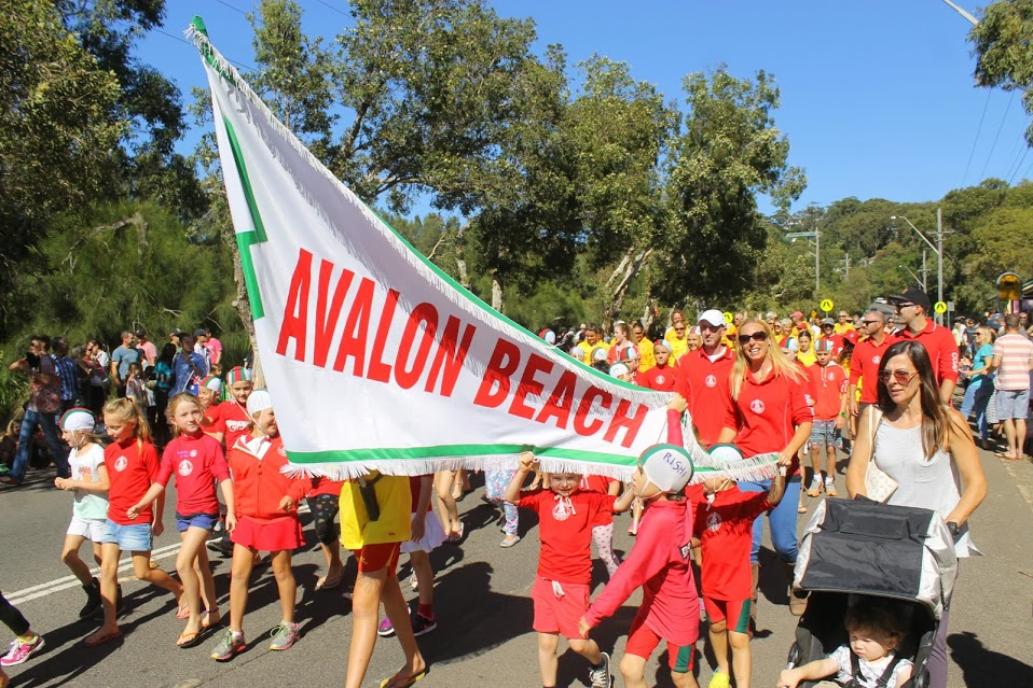 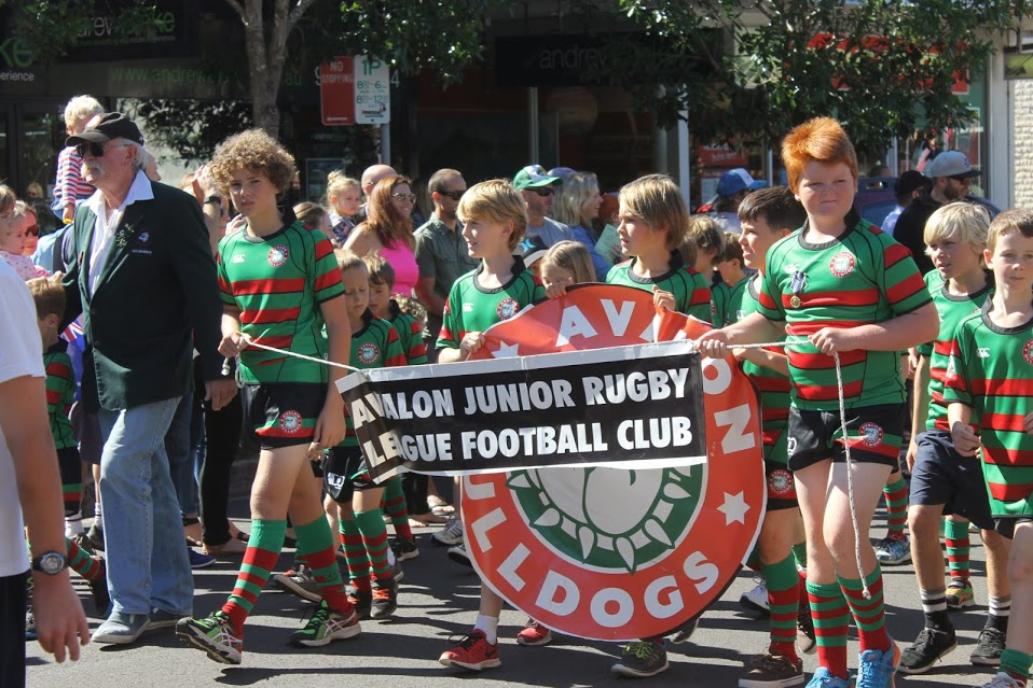 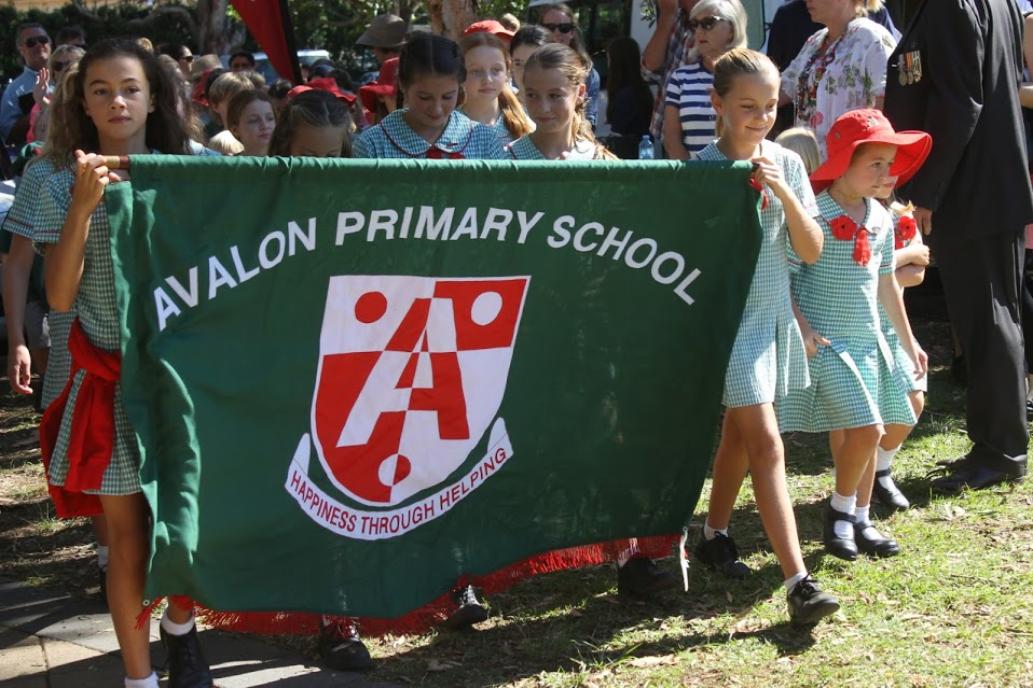 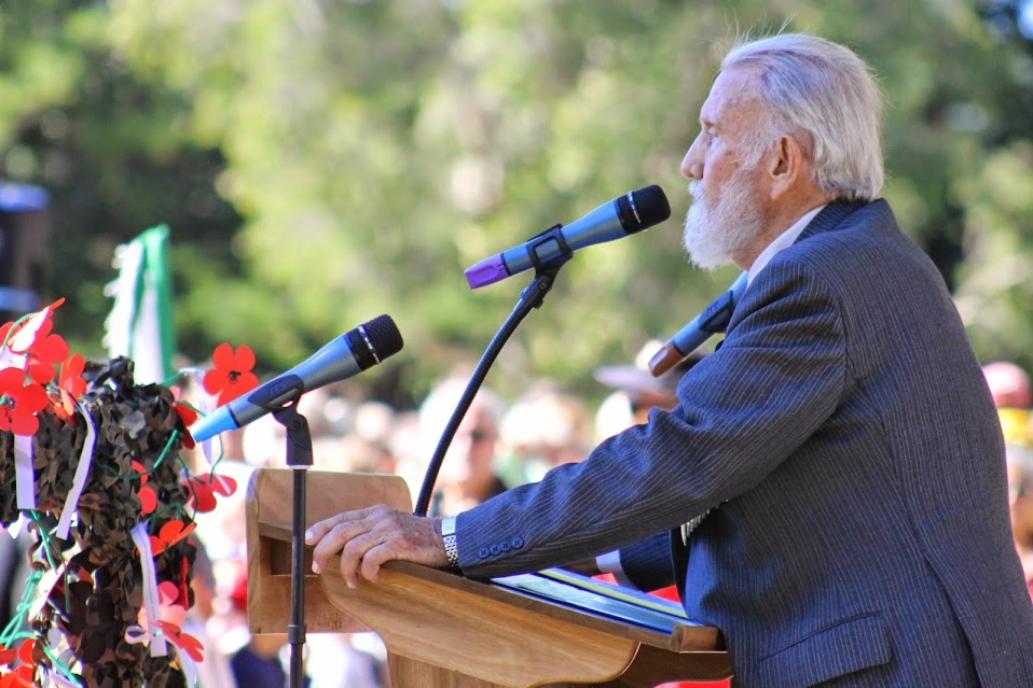 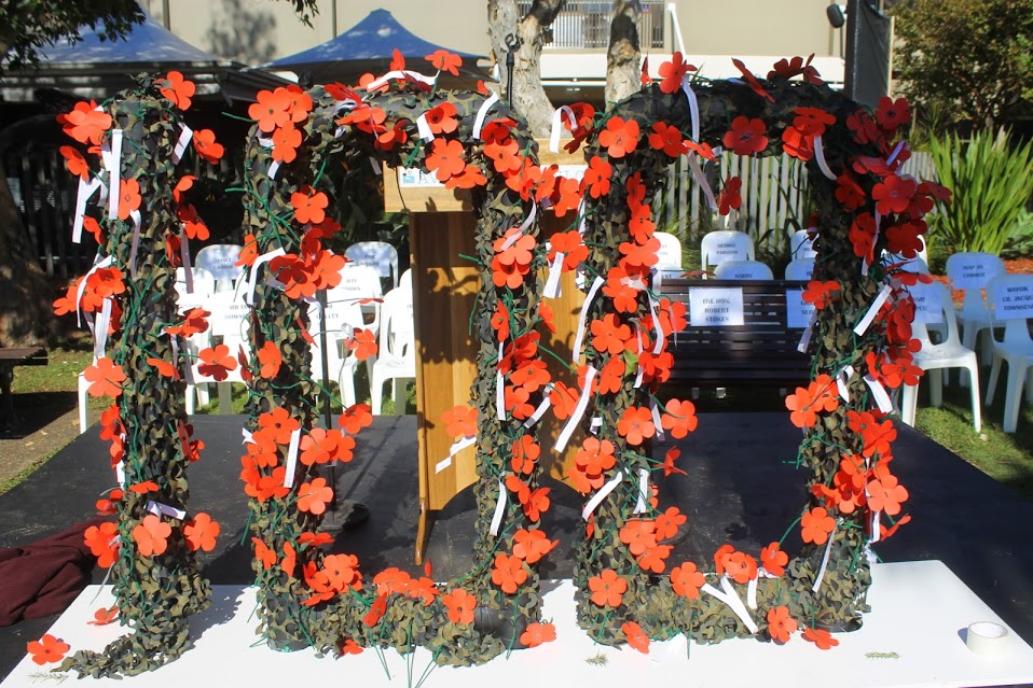