A few weeks back some may have had a giggle over a Channel 9 report where the Premier, in opening a new bridge at Penrith and being confronted by that vocal resilient core of protesters trying to save the historic and iconic Thomspons Square at Windsor, told them that today was about Penrith ‘so just keep quiet’.

Some may have even emitted their own little ‘no’ in chorused answer, unheard and unseen in their own living rooms.

Following on the back of revelations by Warriewood residents that yet another section of Warriewood’s green creek areas had been razed by a developer comes the finally released knowledge that a development for 22 dwellings in a buffer zone (Narrabeen creek), and the amending of the Pittwater Local environment Plan (LEP) so that can proceed, has been progressed by the NSW Dept. of Planning. 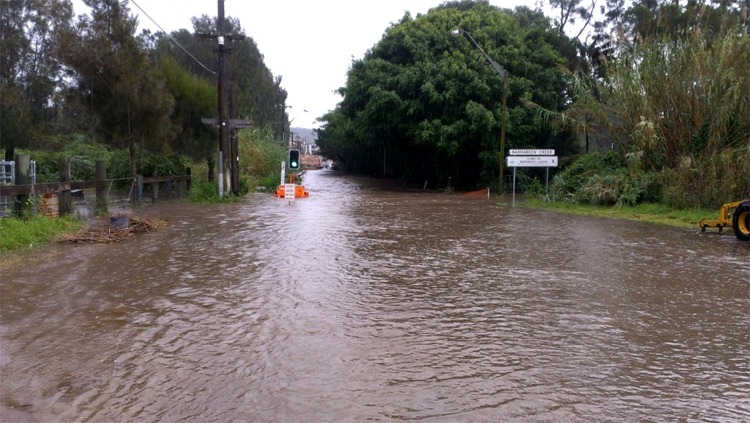 An old photo of Macpherson St but still relevant with regard to flooding.

The ‘news’ comes the same week that department is asking the populace to ‘have its say on community consultations’ and crowing about how building approvals and constructions have gone up and this will produce ‘housing affordability’. [1., 2.]

On Tuesday this week, November 13, the Save Sydney Coalition held their first forum.

In September 2018, at the Sydney 2050: Today’s planning for tomorrow’s Sydney hosted by the Committee for Economic Development of Australia, NSW Planning Minister Anthony Roberts said the Government aims to be the guide and support self-determination in the planning process. ‘The Government should worry about macro issues and let councils and local communities plan their neighbourhoods. ‘

“The State Government can’t force change from the top down. We need to collaborate while at the same time providing guidance. Interventionist government doesn’t need to be there for every step of the planning process.” The Planning Minister said

As the Pittwater community witnesses the progression of a large development on the foreshores of Nooal street Newport, approved by that same Planning Minister appointed planning panel which will also require another Pittwater LEP amendment, along with the 2 Macpherson Street Warriewood approval, many are bracing themselves for a rush of similar dismantling of LEP’s and disregard of the community voice to progress cheek by jowl boxes in flood prone zones or on any available remnant green space.

With no infrastructure as yet in place; no additional GP’s in the area, no additional car park spaces for those who may need to purchase food to eat, and a closed Emergency Department at Mona Vale Hospital and access to a hospital still in the throes of ‘teething issues’ via a parkway that is closed, also due to flooding, if it rains for more than a few hours, the back of patience is breaking, locally.

As long as several millions are to be made, local government rendered ineffectual in all bar issuing parking ticket matters, and the community left to foot the tab for anything that goes wrong, developers have been given a green light to rush with open arms where they will receive a ‘yes, yes, YES!’.

The recent experiences beg that question, of course; will the individual and the community ‘just be quiet’?

Comments on the Pittwater Online News facebook platform, such as 'More madness', 'How can anyone think this ok?', 'That's the developer going straight to the planning department after having been knocked back by council and its happening all over the place.', 'Who in their right mind builds on the lowest part of a wetland- someone who just does not care.' would suggest not.

The community will not 'just be quiet'.

The wise, and even the unwise, would know there remains that quiet, persistent, unconquerable and unsilenced…

Our thanks to Councillor Vincent De Luca OAM, the only 'community representative' who has bothered to let any resident know about the decision.

1. Exhibition of draft Community Participation Plan; ‘describes our approach to community engagement and sets out how and when the community can participate…’ https://www.planning.nsw.gov.au/communityparticipationplan - 'have your say' until December 6th, 2018

The NSW Government is continuing to support housing affordability in Sydney with a record net 44,315 new homes built in the 12 months to September 2018 – a new record for housing completions.

“This record number of home completions is showing the Department’s efforts to streamline the planning system are well and truly making a difference,” Ms Frame said.

“The data shows that housing supply continues to meet demand - we’re making sure enough new homes are being built, matched by the critical infrastructure needed to accommodate growing communities.”

Ms Frame said the record number of homes represented a 22 per cent increase on a year ago, demonstrating the success of the NSW Government’s housing strategy.

“The Government has accelerated local planning and the delivery of infrastructure, cut red tape, and offered concessions, which have more than doubled the number of first home buyers in Sydney since early 2017,” she said.

“This is all backed by a solid pipeline of approvals, with many homes currently under construction.”