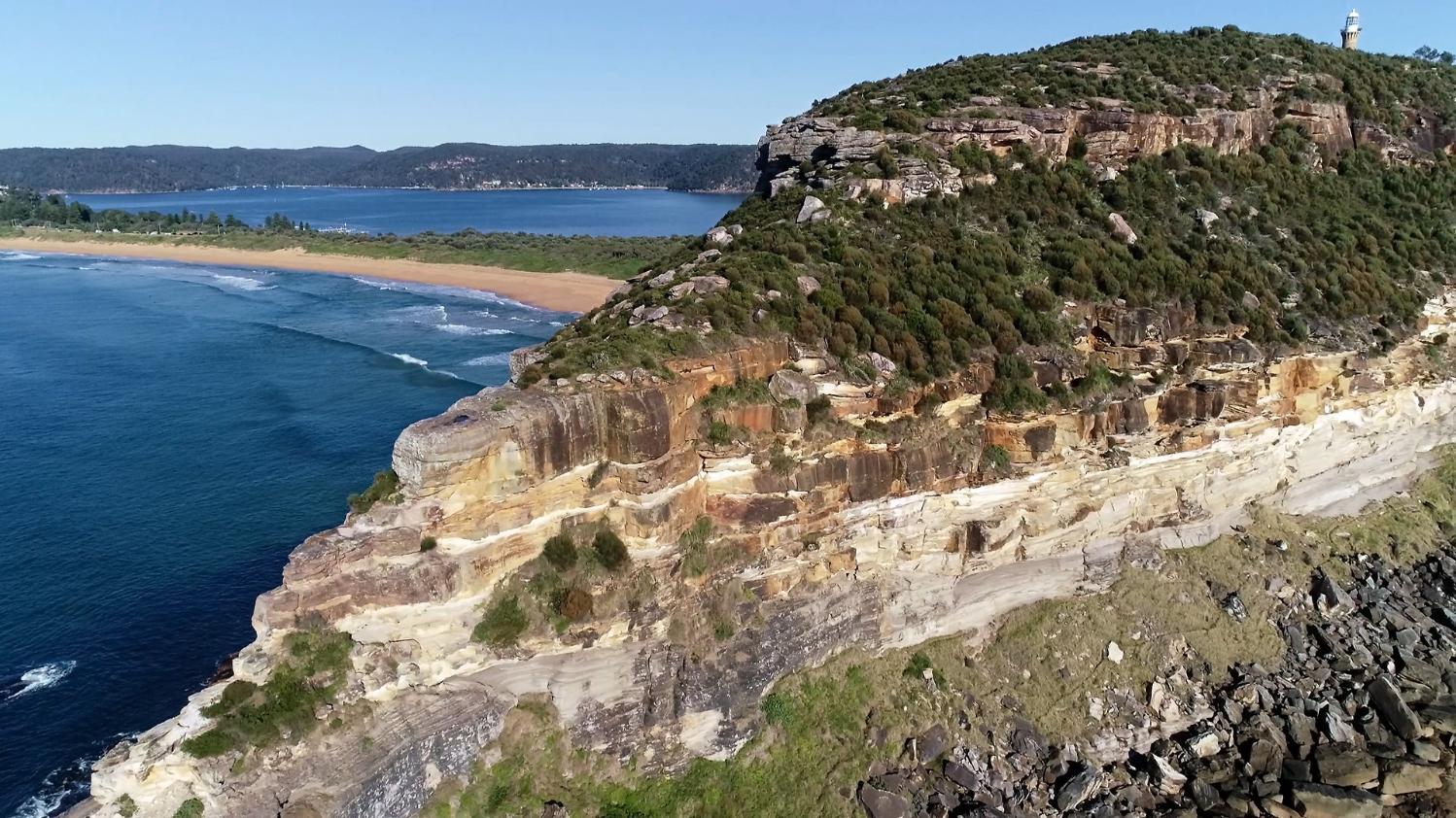 This video begins in Cabbage Tree Bay at the south end of the Palm Beach isthmus and flies north to Barrenjoey where the lighthouse stands at 102m ASL.  The upper half to three quarters of that headland is composed of Hawkesbury Sandstone overlying Upper Newport Formation, and one of Sydney’s larger dykes outcrops at sea level on the northern edge.

Barrenjoey is generally referred to as a tied island or tombolo, one of those slightly annoying terms beloved of geographers that does not always tell us much about the feature. The general meaning of tombolo is an island linked to the mainland shore by a body of sediment that is usually assumed to have accumulated as a spit.

The Pittwater-Barrenjoey link is a tied island in the simplest sense but the story is considerably more complex than the term tombolo suggests. The word is Italian, and although widely used in English, in the original language it more often refers to things to do with crochet or bobbin lace. You do sometimes wonder about translations.

None of the tied islands near Sydney; Kurnell, North Head, Long Reef, and Barrenjoey, are linked to the mainland by spits, they are all connected by barrier beach systems. Palm Beach is a good example and to understand its formation we need to look at bedrock morphology and sediment distribution beneath the waves.

The present day entrance to Pittwater is across a drowned bedrock ridge with a water depth of only 12m between Barrenjoey and West Head.

Seismic profiles reveal the presence of two deep river channels eroded into bedrock and partly filled with sediment. One is the ancient channel of the Hawkesbury River that passes between Barrenjoey and Lion Island at a depth of >100m. The other is the former channel of the ‘Pittwater River’ or McCarrs Creek that runs the length of Pittwater then passes under the sand barrier south of Barrenjoey at a depth of 76m.

The two palaeochannels join about 4km offshore at 120m depth, on what was the coastline at the peak of the last ice age about 20,000 years ago.

As the global ice sheets melted, sea level rose rapidly, sweeping sand onto the retreating coast. A beach/dune barrier system formed the isthmus but would have been kept open at the northern end by the Pittwater River until sea level reached the crest of the ridge between Barrenjoey and West Head.  At that time the route of the Pittwater River would have shifted to flow north and join the Hawkesbury allowing the sand barrier to close. The distribution of tidal sand and estuarine mud in both Broken Bay and Pittwater, and the presence of deep water (>40m) in the upper reaches of Pittwater confirm the story. Additionally, a number of radiocarbon dates have been obtained from different sediments, almost all of which fall within the Holocene (<12,000 years) showing that these changes took place well within the time frame of human occupation.

Aboriginal people lived in this landscape when Pittwater and the Hawkesbury were deep valleys probably carrying spotted gum forest and pockets of rainforest. Barrenjoey was a lesser peak on a stony ridge extending from Commodore Heights and ending some 4 km east of the present shore. Those people would have observed the sea level rise, saw regular turbulent tidal flows in and out of Pittwater at the foot of Barrenjoey, and the shift of the Pittwater River into the Hawkesbury as the ridge was drowned. This was a bold landscape that must have had important stories attached to it, all of which have been lost.

Film and details in the film HERE

For all those who write in asking for more 'strolls through Pittwater Reserves' some wonderful images by Joe this week run as the Pictorial for Issue 510. 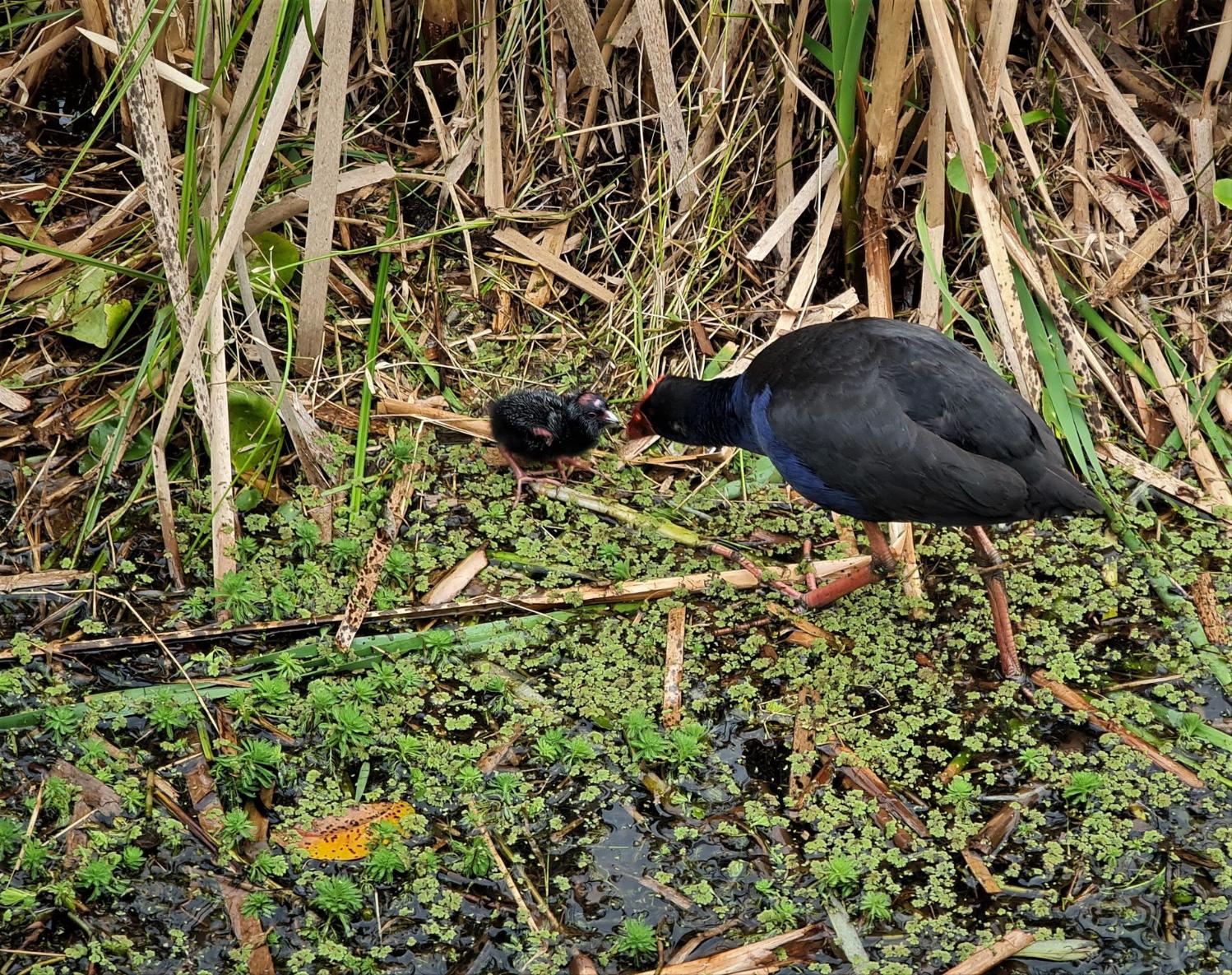