Bushcare In Winter: A Great Time To Plant To Make Cooler Greener Summers 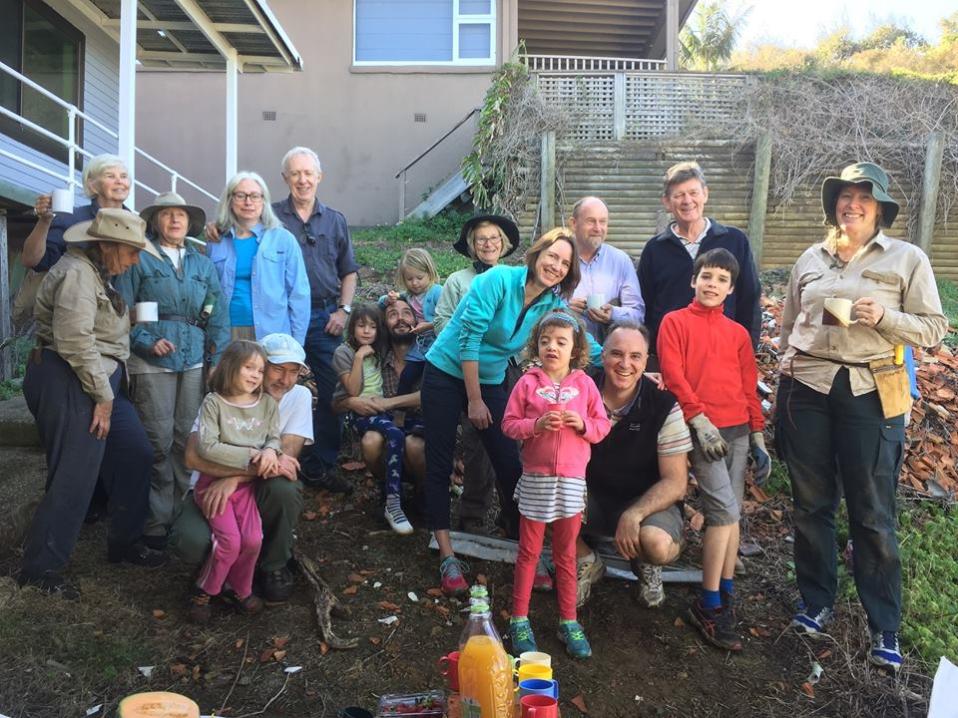 This is an excellent time of year to plant, with mild weather and dampish soil.

It's also a great time of year to get some warming up exercise and do something you will see create positives all round while you're doing it and for years to come.

This Issue a few insights into local bushcare groups works that have occurred during the past few weeks and some coming up that you can get involved with.

Bangalley Headland Bush Regeneration
Bangalley Head stands as one of the highest points and largest bushland reserves on Sydney's northern coastline. The owners of six adjoining properties in North Avalon have bushland along the western boundary of Bangalley Headland Reserve and have joined the Bangalley Head Landcare Group. This project has provided assistance from bush regeneration contractors on their land along with training to introduce hand weeding techniques to the new members. A grant from Greater Sydney Local Land Services has enabled the group to care for their own land as bushland and increase the area of bushland under good management.

The Bangalley Head Reserve planting on Sunday May 27 was a great success. The southwest corner had been very weedy for years, so needed planting with tubestock to bring back the bush. This area is behind the corner of Milga Rd and Binburra Ave. Thanks to neighbours Phil and John who allowed us access through their land.

The group planted about 200 local native plants. Thanks to all the volunteers who helped work on this not-too-easy sloping site. It was great to see children helping - we hope they will be back to see their plants thriving in the future.

The Bangalley Head Landcare Group, with Northern Beaches Council, organised the planting. Landcare group members can have contract bush regeneration done on their land, thanks to a three-year $55 000 grant from Greater Sydney Local Land Services. 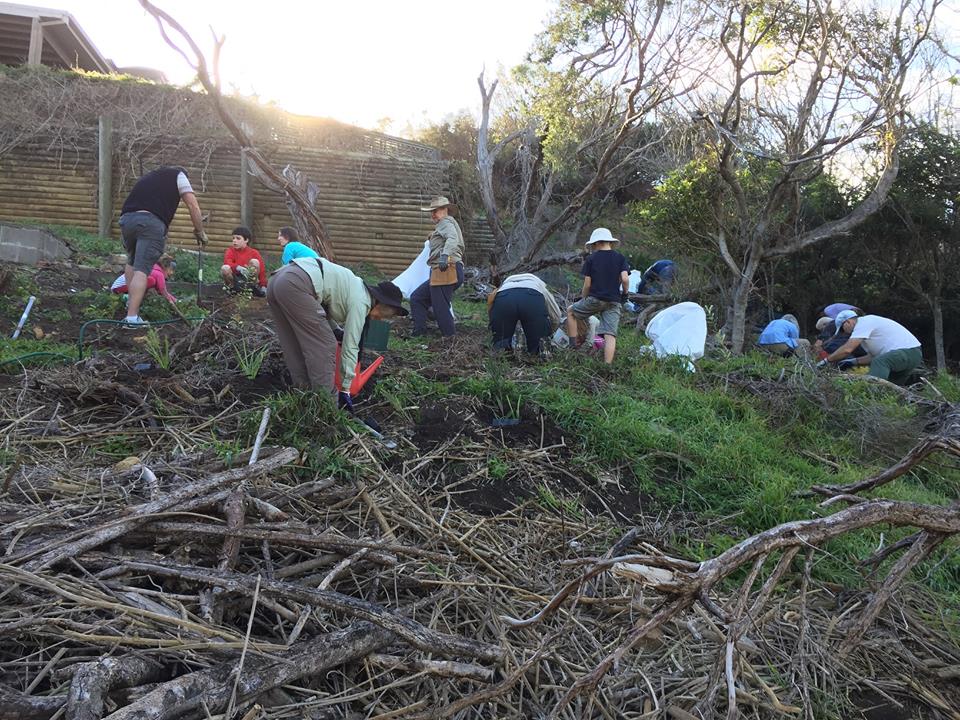 Control of vine weeds, Careel Creek Avalon
Pittwater Natural Heritage Association (PNHA) have been working in partnership with Council and Greater Sydney Local Land Services over the past 8 years to restore the riparian area along Careel Creek. During this project volunteers and contractors have focussed on controlling vine weeds along the Creekline from Avalon Dunes to Careel Bay. The project also aims to engage 27 private landholders along the creek through a weedy vines flyer, contractor hours and community planting days where locally native plants are planted have formed part of the project.

Barrenjoey High School has also been involved in the project, being one of the larger landholders along the Creek.

As part of their grant project to rid Careel Creek in Avalon of Vine Weeds, Pittwater Natural Heritage Association invite you to a planting morning on Sunday June 24. Children Welcome!

The bush regeneration contractors have done most of the hard work. Now we can have fun planting!

PNHA postponed this activity because of the hot dry weather, but now they're set to go. 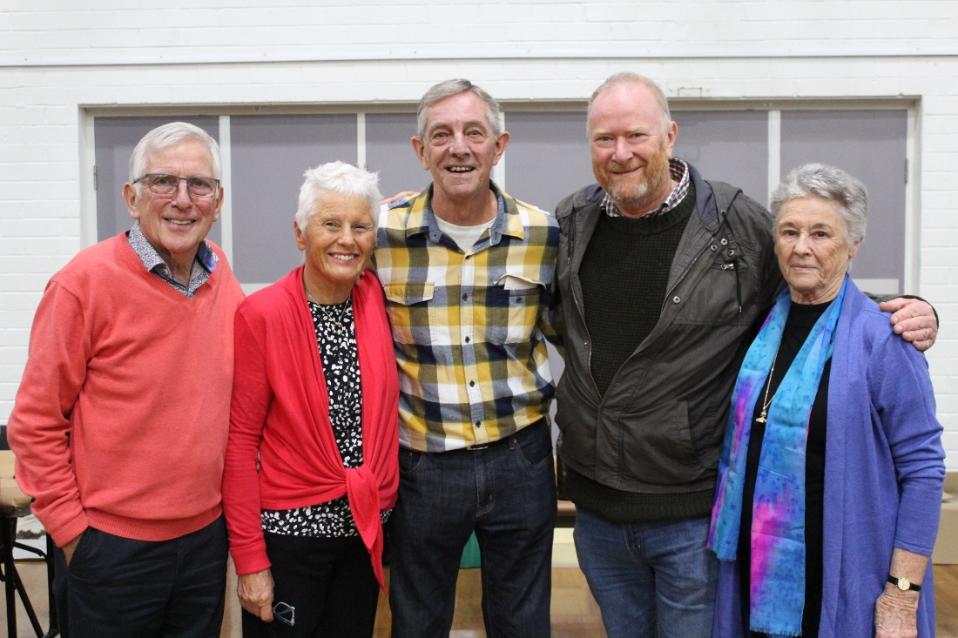 Five of the original 19 ABHS Members were in attendance at the opening; Russell and Gwen Lansbury, Geoff Searl, Nickolas Manfield, and Judy Thomson.

There are around one thousand photographs on display at Avalon Recreation Centre this June long weekend and each weaves the many tracks, paths and roads that have evolved with the development of a rural place into suburbs on the fringe of a city. The exhibition is proof positive that any picture is worth more than a thousand words.

This is best underlined in an example that show show yesterday is connected to today through us, the people who live here. Alison Bosley stands beside a photograph of her Great aunt, Grace Wickham. Grace was the wife of Stan Wickham, a rugby giant during his younger days. 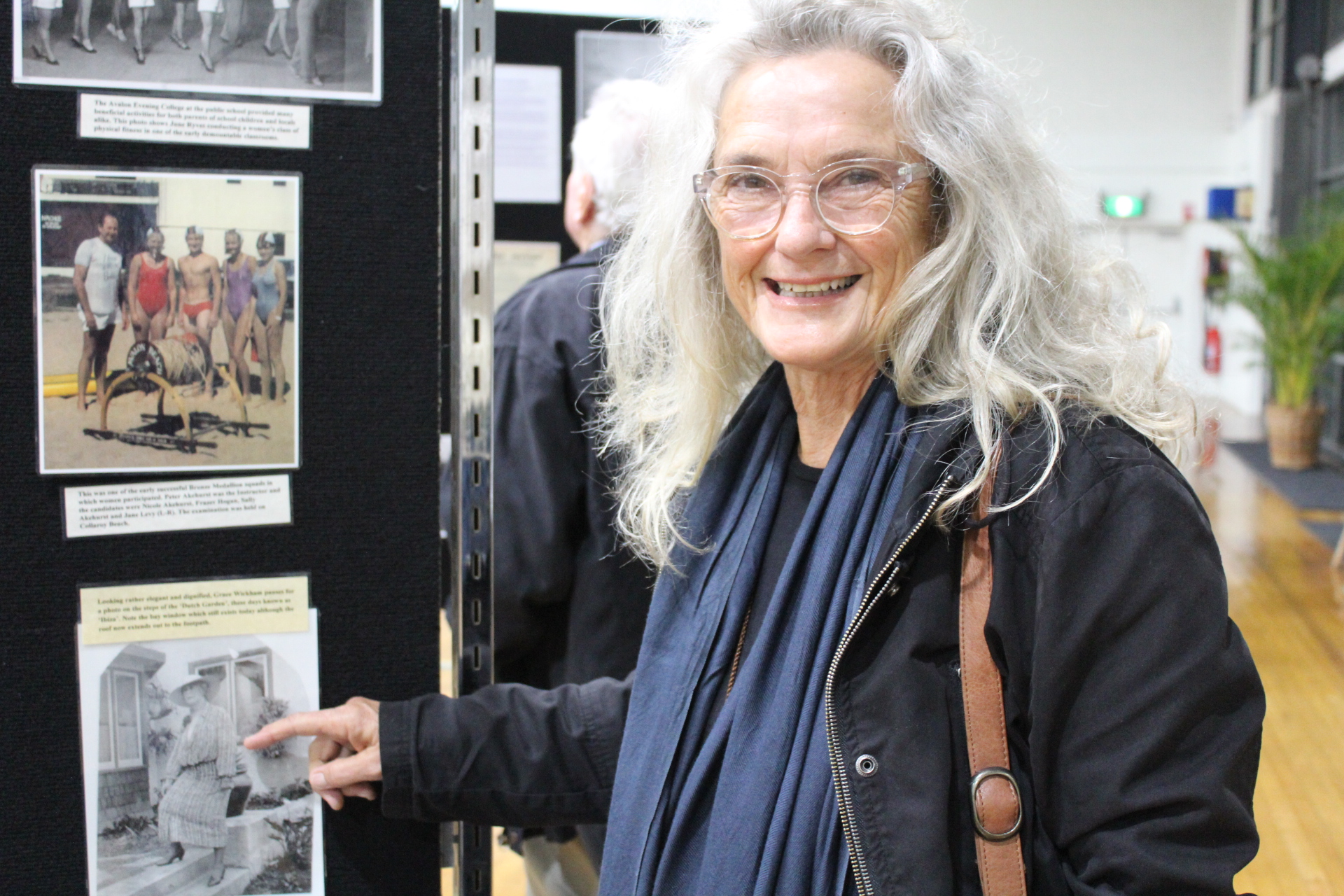 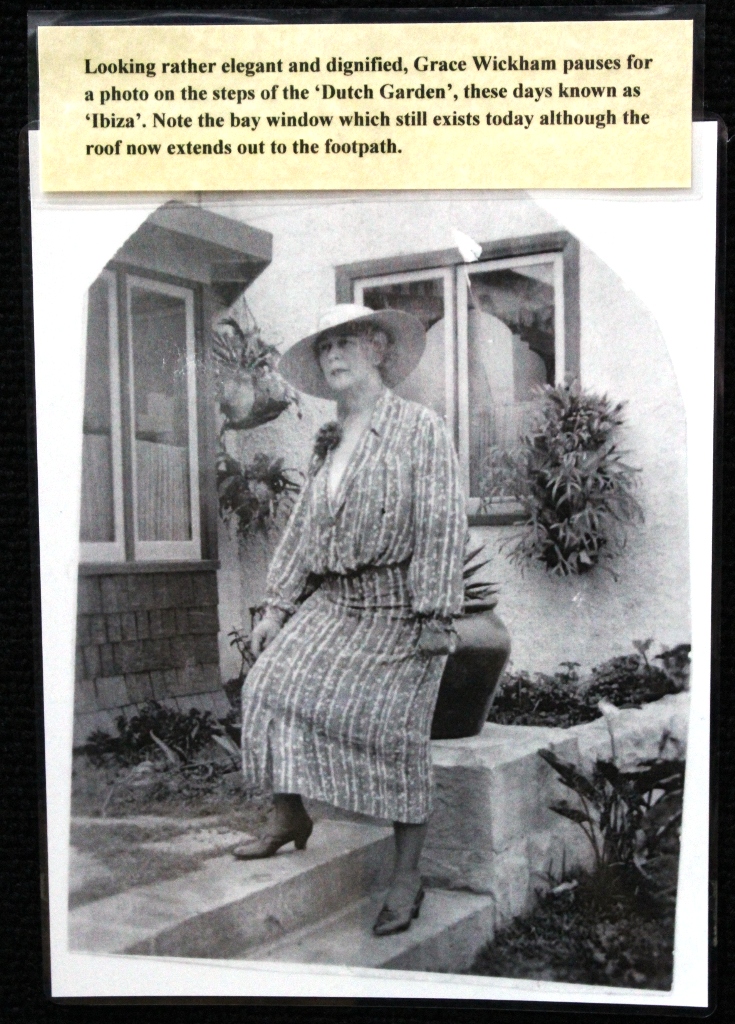 Grace came to Avalon in 1924 with Stan and their two young children to take up tenancy of A. J. Small’s General Store.

In 1934 the Wickham’s had built their own store on the diagonally opposite corner, where the wine store now stands. While Stan was out making deliveries Grace would run the store, including the Post Office within the store, redirected telephone calls, handled holiday lettings for the cottages and homes as they sprang up, raised her children and as a nurse, acted as the local GP until a doctor had settled in the valley of Avalon.

On a tragic note, she also took the telegram which informed her of her son being shot down over Germany in 1939 whilst a flier for the Royal Air Force.

Wickham Lane, running beside the Post Office’s present site is named after the Wickhams.

Alison Bosley explains that this was the path they used to use to go to the shop and later the tea rooms beside it.

LIKE Mark Twain's famous pre-demise 'obituary,' our recent reference to ex-Parramatta and Rugby Union international, Stan Wickham, as the 'late,' was 'somewhat premature.' Stan, of course (like Johnie Walker) is still going strong at his seaside home at Avalon Beach and, come January next, he'll be 80 years young.
'Tell the folks in Parramatta that I'm feeling as fit as a fiddle,' said Stan', when I phoned him to apologise for having inadvertently written him off  this world's ledger. Stan, who was playing with Parramatta Rugby Union Football Club when the team temporarily folded up in 1884, is sad about the side's present eclipse. ''Tell the boys I'm open to an offer,' he cracked as we hung up. ROUNDABOUT (1955, August 17). The Cumberland Argus(Parramatta, NSW : 1950 - 1962), , p. 1. Retrieved from http://nla.gov.au/nla.news-article131388162

President of the Avalon Beach Historical Society, Geoff Searl, welcomed around 100 Members, Friends of ABHS and Community Stalwarts of the society on Friday night to a sneak peek at this year’s ABHS Exhibition. 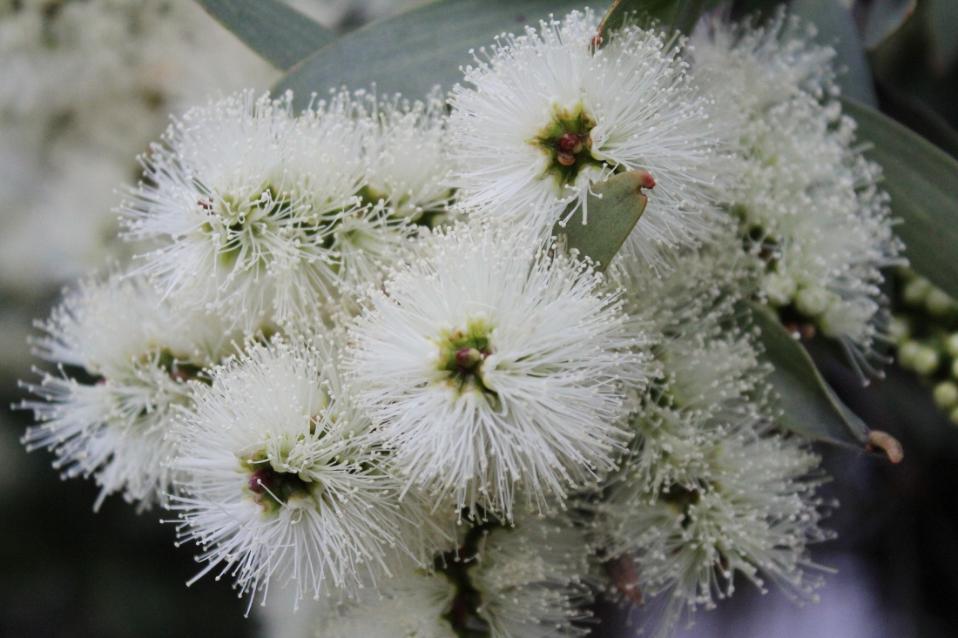 Currently flowering in Pittwater - The paperbark tree. A J Guesdon photo.
Melaleuca quinquenervia, commonly known as the broad-leaved paperbark, paper bark tea tree, punk tree or niaouli, is a small- to medium-sized tree of the myrtle family, Myrtaceae. It grows as a spreading tree up to 20 m (70 ft) tall, with its trunk covered by a white, beige and grey thick papery bark. The grey-green leaves are egg-shaped, and cream or white bottlebrush-like flowers appear from late spring to autumn (and early winter!). It was first formally described in 1797 by the Spanish naturalist Antonio José Cavanilles.
Melaleuca quinquenervia is native to New Caledonia, Papua New Guinea and coastal eastern Australia, from Botany Bay in New South Wales northwards into Queensland. It grows in swamps, on floodplains and near rivers and estuaries, often on silty soil. 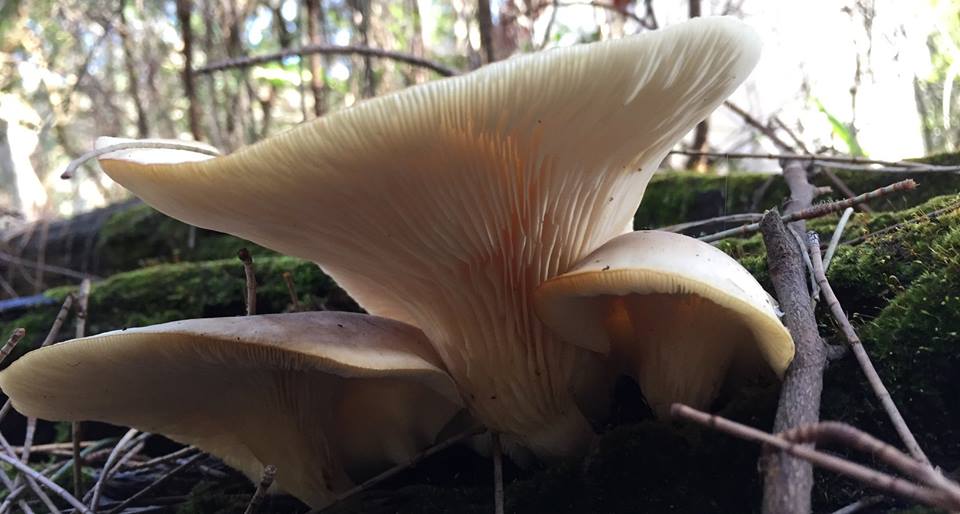 On Avalon Dunes - a fungus that glows at night is Ghost Fungus Omphalotus nidiformis. Photo courtesy Pittwater Natural Heritage Association.
Omphalotus nidiformis, or ghost fungus, is a gilled basidiomycete mushroom most notable for its bioluminescent properties. It is known to occur primarily in southern Australia and Tasmania.
First described scientifically in 1844, the fungus has been known by several names in its taxonomic history. It was assigned its current name by Orson K. Miller, Jr. in 1994. Its scientific name is derived from the Latin nidus "nest", hence 'nest shaped'. Similar in appearance to the common edible oyster mushroom, it was previously considered a member of the same genus, Pleurotus, and described under the former names Pleurotus nidiformis or Pleurotus lampas. Unlike oyster mushrooms, O. nidiformis is poisonous