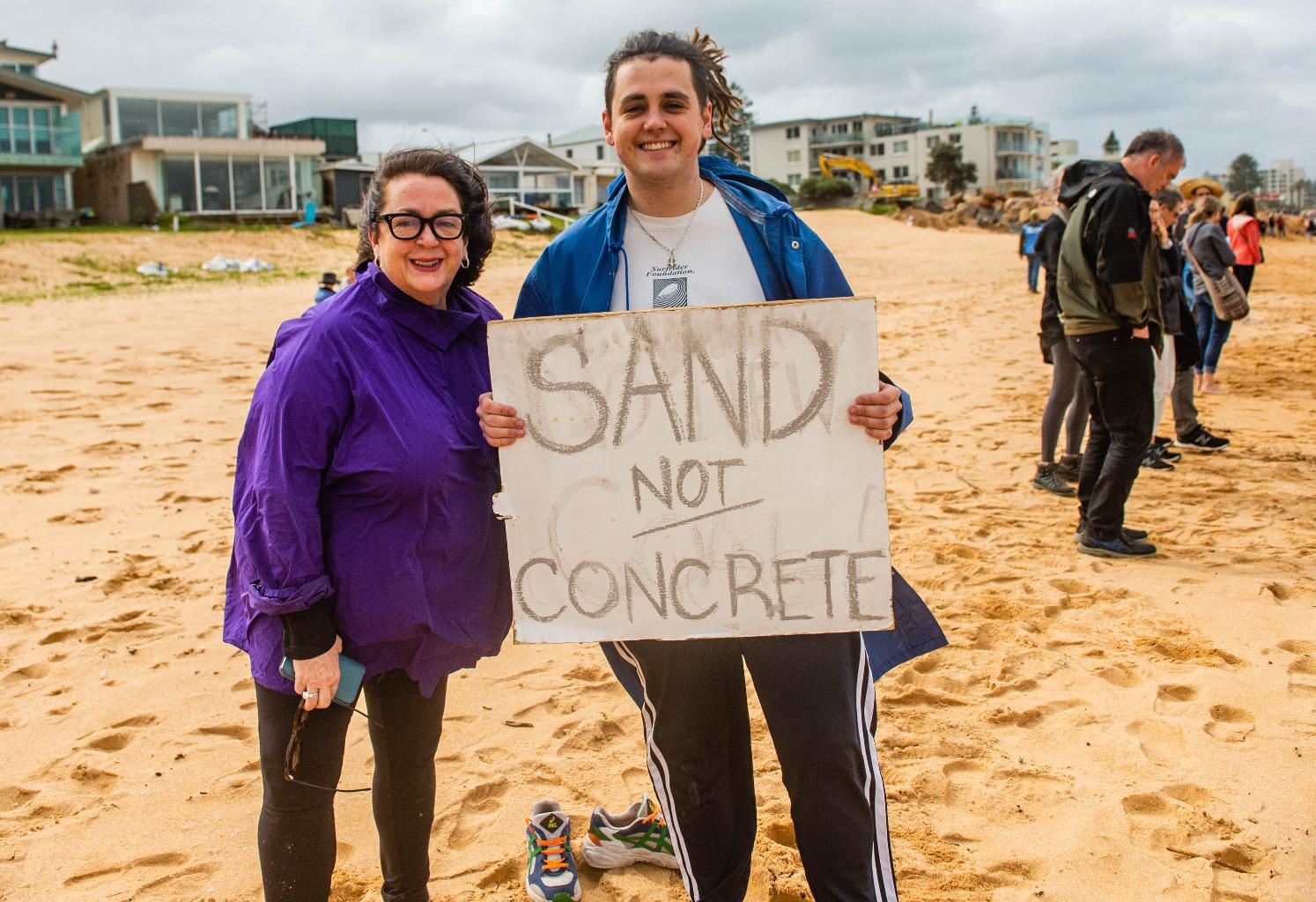 Wendy Harmer and son Marley Donohoe were part of the Line in the Sand II peaceful demonstration. 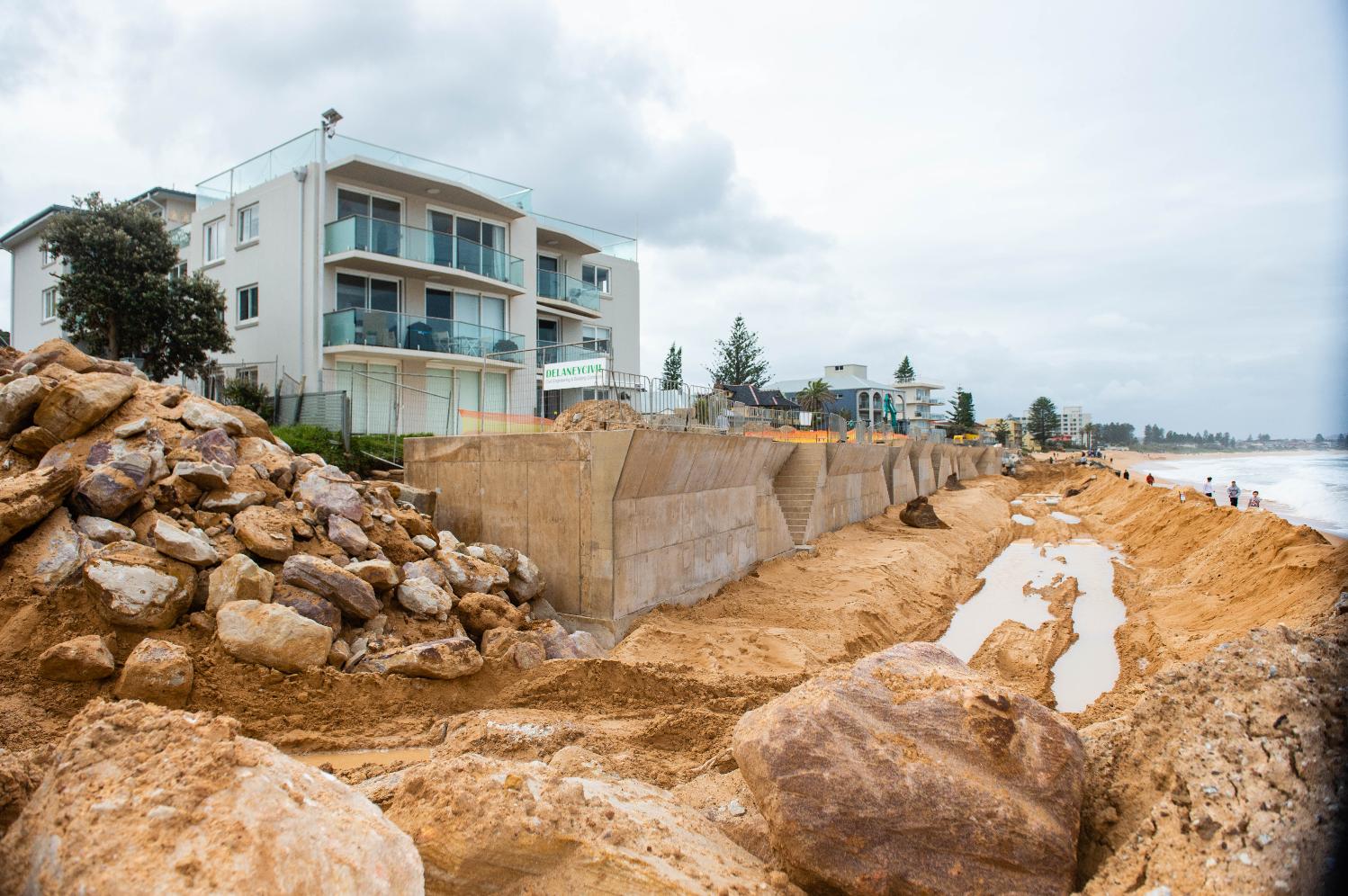 The Collaroy-Narrabeen beachfront at present.

On Saturday November 27th residents held a peaceful demonstration along the Collaroy-Narrabeen beachfront calling on the council and NSW Planning Minister to find some other solution other than continuing constructing the Collaroy sea wall further north. Despite awful weather conditions people came onto the beach over the rocks, over the sand excavations, from both the north and the south. Their aim is to protect and preserve the beach.

''When humans build seawalls on beaches to protect private property and infrastructure, they harden the coast and remove its ability to recover naturally. One thing is absolutely certain according to coastal scientists worldwide: vertical seawalls protect land property in the short-term but, eventually, destroy beaches.

We are asking Northern Beaches Council to stop the construction of the vertical seawall, and consult with the broader community about more effective measures that protect private property but do not risk the loss of our precious beach system.'' Surfrider Foundation Northern Beaches states.

''Thank you again to all who braved the elements last Saturday to defend our beach and say NO to the vertical sea wall.

There is still much to do to sort out this mess locally, and also to prevent these  horrible mistakes from happening elsewhere on our coast.

Please go to www.lineinthesandcollaroy.org  to send a petition to Northern Beaches Council and an email to Rob Stokes

There are better solutions to protect property and preserve our beaches.'' the Foundation says

The following video has been released:

Editing and footage: Olliepop Media House Matt Clark Photography Matt Dunbar Photography
Although there is sympathy and support for owners to be protected, including those that are the subject of a proposal to extend the wall north in the same type (DA2021/1612), the extending of this sea wall construction in its current form is contrary to the Objects of the Coastal Management Act 2016 and the requirements of both the Act and the Coastal Management SEPP.

The objects of this Act are to manage the coastal environment of New South Wales in a manner consistent with the principles of ecologically sustainable development for the social, cultural and economic well-being of the people of the State, and in particular—

(a)  to protect and enhance natural coastal processes and coastal environmental values including natural character, scenic value, biological diversity and ecosystem integrity and resilience, and

(b)  to support the social and cultural values of the coastal zone and maintain public access, amenity, use and safety, and

(c)  to acknowledge Aboriginal peoples’ spiritual, social, customary and economic use of the coastal zone, and

(d)  to recognise the coastal zone as a vital economic zone and to support sustainable coastal economies, and

(e)  to facilitate ecologically sustainable development in the coastal zone and promote sustainable land use planning decision-making, and

(f)  to mitigate current and future risks from coastal hazards, taking into account the effects of climate change, and

(g)  to recognise that the local and regional scale effects of coastal processes, and the inherently ambulatory and dynamic nature of the shoreline, may result in the loss of coastal land to the sea (including estuaries and other arms of the sea), and to manage coastal use and development accordingly, and

(h)  to promote integrated and co-ordinated coastal planning, management and reporting, and

(i)  to encourage and promote plans and strategies to improve the resilience of coastal assets to the impacts of an uncertain climate future including impacts of extreme storm events, and

(j)  to ensure co-ordination of the policies and activities of government and public authorities relating to the coastal zone and to facilitate the proper integration of their management activities, and

(k)  to support public participation in coastal management and planning and greater public awareness, education and understanding of coastal processes and management actions, and

(l)  to facilitate the identification of land in the coastal zone for acquisition by public or local authorities in order to promote the protection, enhancement, maintenance and restoration of the environment of the coastal zone, and

(m)  to support the objects of the Marine Estate Management Act 2014.

On Friday November 26th the Northern Beaches Council published a webpage 'Understanding the Collaroy seawall challenge' in a question/answer format wherein it is stated:

How are applications for seawalls considered?

The legal regime that governs coastal protection in NSW comprises State legislation which allows individual residents to submit development applications for sea walls. Development applications received are required to be assessed in accordance with the relevant legal requirements, including the relevant provisions of the Environmental Planning and Assessment Act 1979 and the Coastal Management Act 2016. The majority of the current works have been approved by an independent Local Planning Panel.

What about a buy-back scheme for the properties affected?

To purchase all the beachfront property just at Collaroy would run to the many hundreds of millions of dollars - outside the budget of a local council. Given the numbers of affected properties around the country, there are no state or federal government plans to use taxpayer dollars for a buy back scheme either.

Why are some sections of the seawall vertical and not a rock revetment?

Rock revetment- style works have been approved at certain areas of the beach. However, the works currently under construction are for a vertical wall which will be located entirely on private property. Due to space constraints on some private properties, a rock revetment-style wall with a uniform alignment would encroach up to 10m onto the public beach. On the basis of independent expert coastal engineering analysis it was concluded that a vertical wall located on the private property is a better outcome to rock revetment encroaching on to the public beach.

This figure above provides an example of the footprint and location of different designs of seawalls relative to the private property boundary. The orange line depicts the shoreline following the June 2016 east coast low.

There is a long history of informal seawalls being in place at Collaroy-Narrabeen Beach. During historic storms as far back as the 1930’s rocks and other material were placed on the beach to manage the impacts of erosion. Over time this has created an almost continuous informal seawall from Collaroy to South Narrabeen. The footage in video above was taken in 2016 and shows the damage this wall suffered in the 2016 storm and how much rock there is on the public beach. The ability for the community to access the beach and enjoy it safely is impacted when this informally placed rock is exposed following storms. Building properly designed seawalls within private property where possible, enables most of this rock on the public beach to be removed.

Will the wall cause damage to the beach?

Extensive assessments by independent coastal engineering experts have been undertaken as part of the DA process for the current works. As every beach operates differently, the assessments considered potential impacts on Collaroy-Narrabeen specifically. For works undertaken consistent with these independent assessments it was concluded that there would not be any significant impacts on coastal processes or the beach. The informal rocks and seawalls have been in place for many decades without any significant changes being observed.

The works being constructed at the moment will result in most of the informal rock walls being removed from this location. This has significant benefits for the beach, public access and public safety.

Other local beaches such as Manly, Curl Curl, Dee Why, Collaroy, Bilgola and Basin Beach (Mona Vale) have vertical walls and these beaches recover naturally following erosion events and continue to be enjoyed by beach users.

Was the community consulted?

Protection at Collaroy has been the subject of conversations and consultation with the community for many years. There was comprehensive community consultation in both 2014 and 2016 in relation to Council’s coastal zone management plan (certified by the Minister) and Council’s policy in respect of Collaroy Beach, as well as more recently for each of the DAs in line with our normal notification process.

The Council reiterates in this webpage that the private works at Collaroy are funded 80% by residents and 10% each by Council and the state government, and that;

''A Development Application for another section of private protection works further north is currently being considered and will be assessed on its merit and determined by the independent Local Planning Panel. All community submissions will be considered in the assessment.''

The 'independent Local Planning Panel' is the Council's own appointed panel.

Currently the available information, other than information submitted by the applicant (which cannot be construed as independent advice) does not meet the necessary criteria and hence the consent authority has no basis on which to be satisfied.

The webpage also states that ''Once this wall is complete, most of the structure will be covered by sand outside of storm events. The works will also be landscaped and integrated with the surrounding landscape.''

Artists impression of pre-storm-sea wall construction once works have been completed.

Under the Coastal Management SEPP, approval cannot be granted if a development is likely to cause an adverse impact on coastal environmental values and natural coastal processes, existing public open space and safe access to and along the foreshore, beach, headland or rock platform, or the use of the surf zone.

Another key requirement is section 27 of the Coastal Management Act, which guides granting of development consent relating to coastal protection works. This section requires a condition that makes sure the works done will not impact on public safety or people’s ability to access and enjoy the adjoining public beach now or in the future.

Coastal Engineer Angus Gordon OAM, in speaking to Wendy Frew for her May 2021 The Coast episode 'Holding back the Tide', when asked about design issues related to a vertical wall, said  “is perhaps the one that has the most severe potential for serious damage on the beach and it is also the one more prone to catastrophic failure … which is not a good idea if you accept there will be climate change over the life of the wall and you will have higher water levels and larger waves than the wall was designed for.”

A way forward that will satisfy both residents and all who use this beach and not cause the beach scouring so many state will occur if this wall proceeds north in the same build has yet to be discussed.

Line in the Sand 2021 - where one could be formed around the mounds of construction. 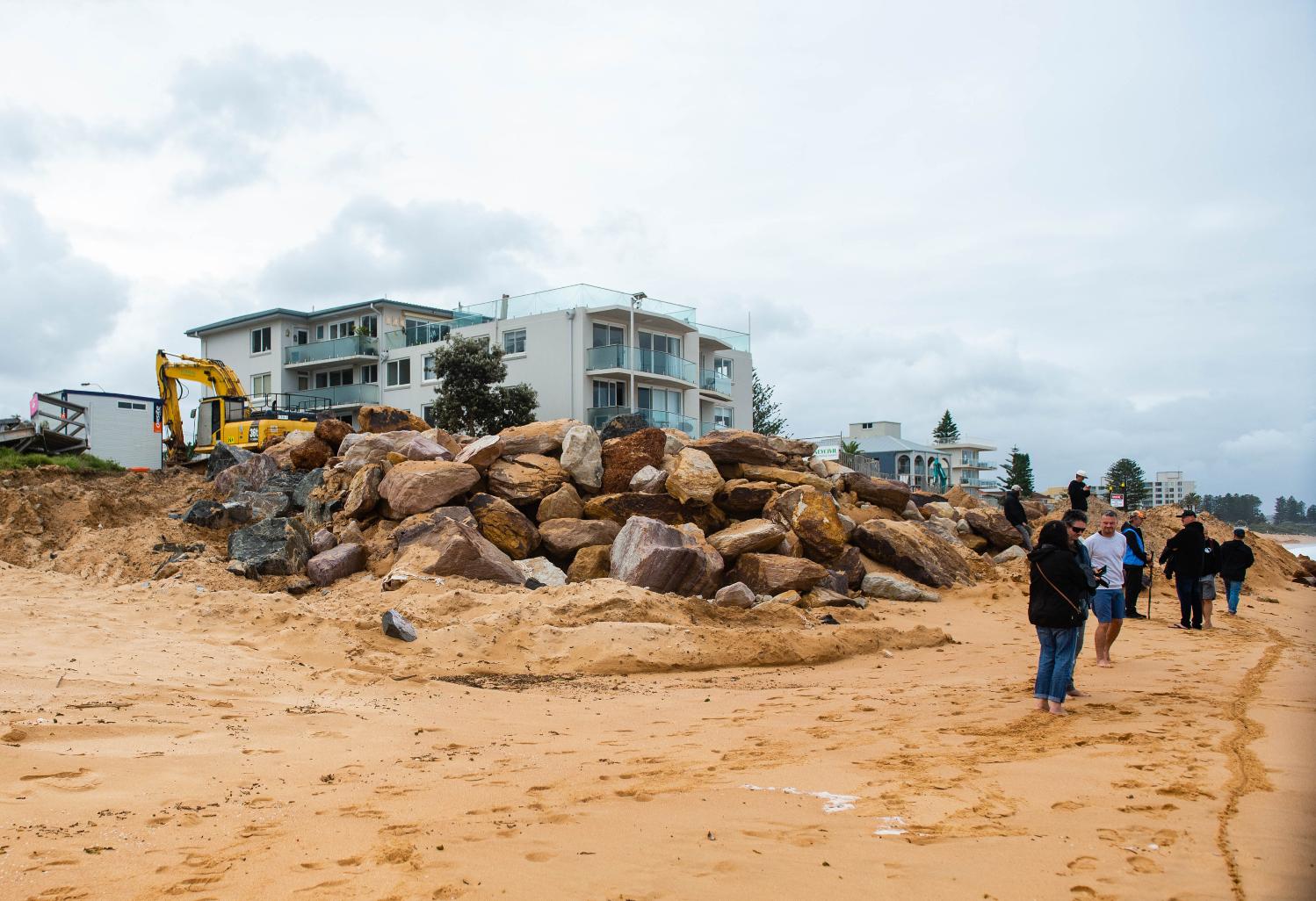 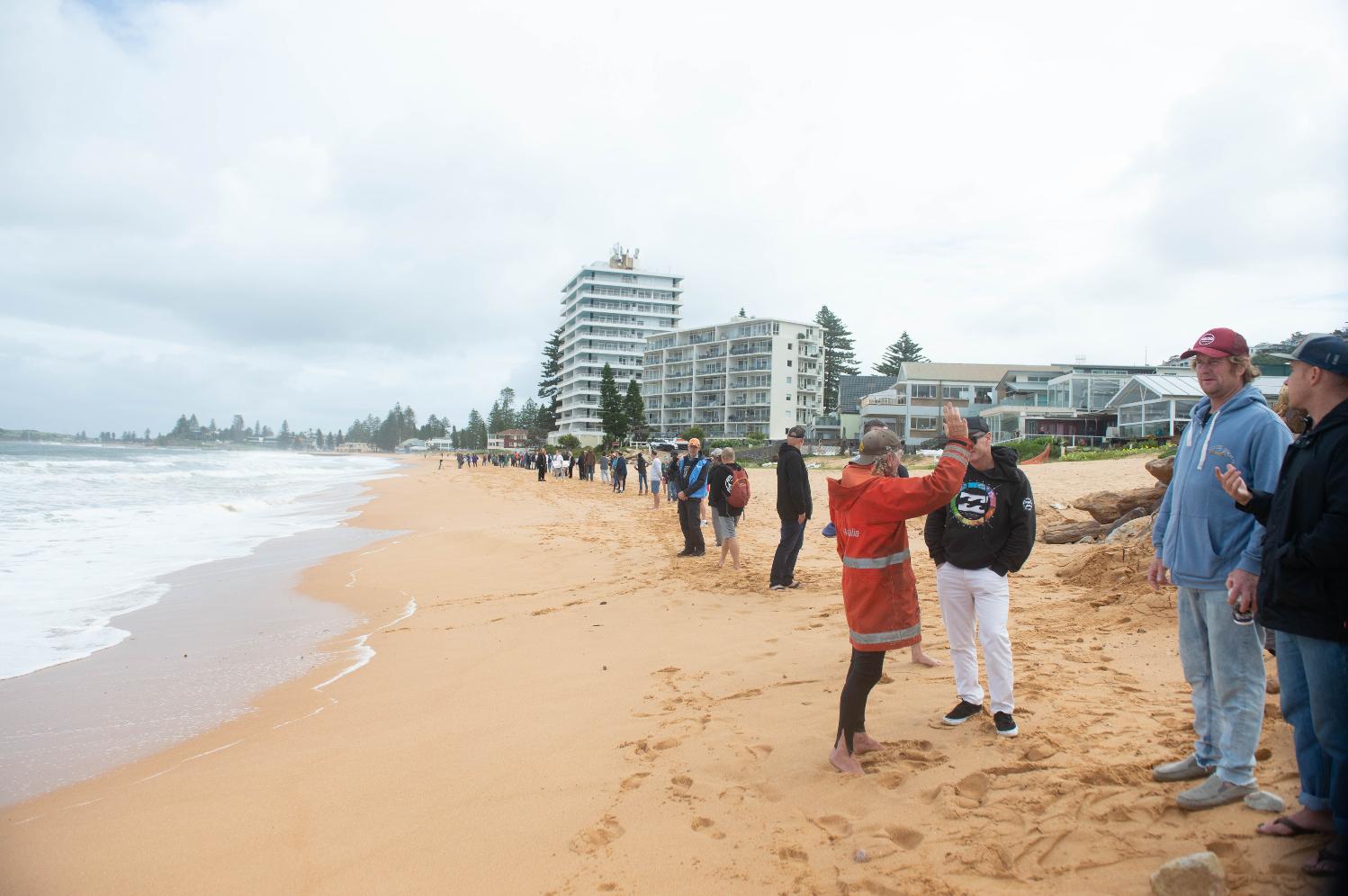 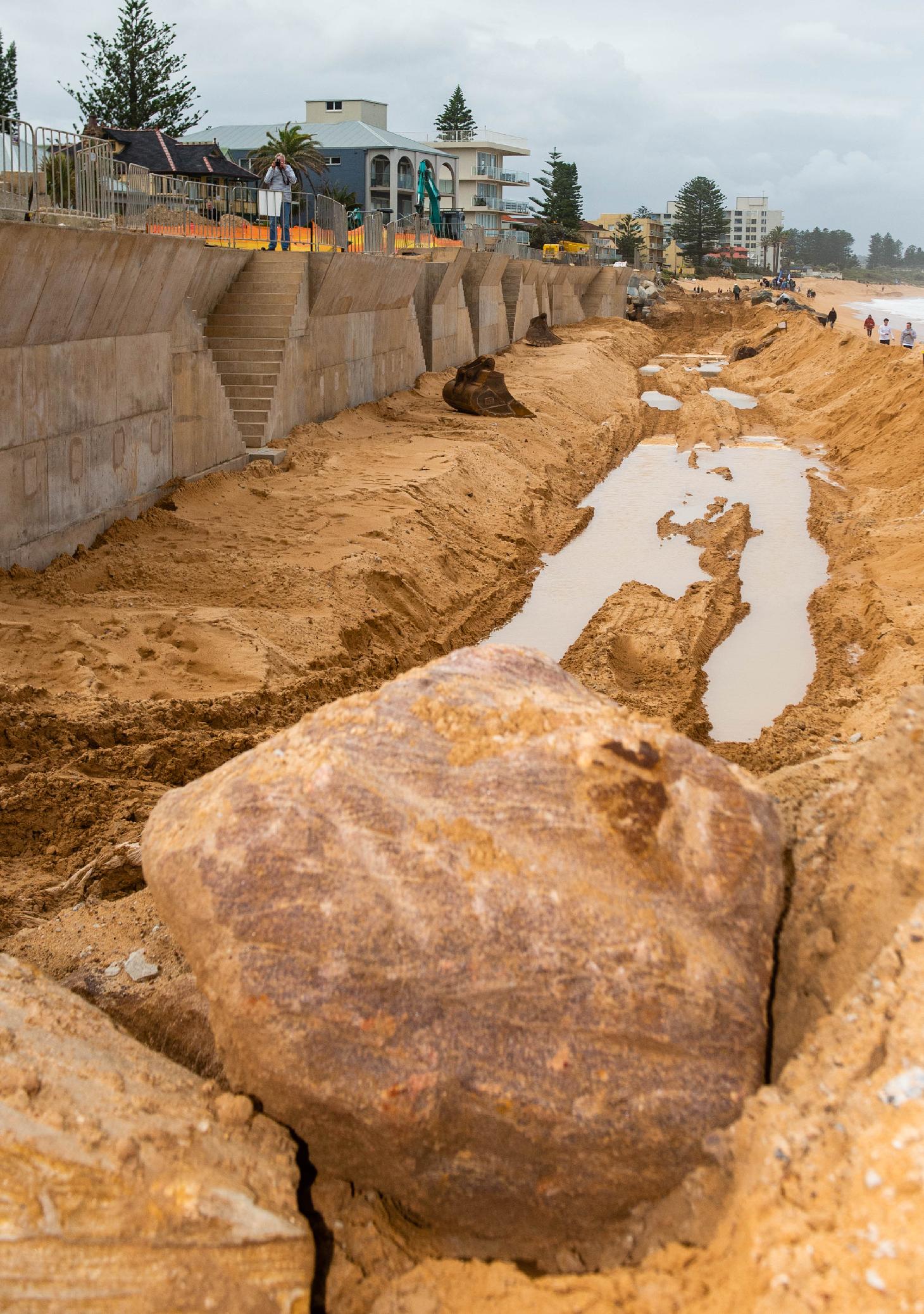 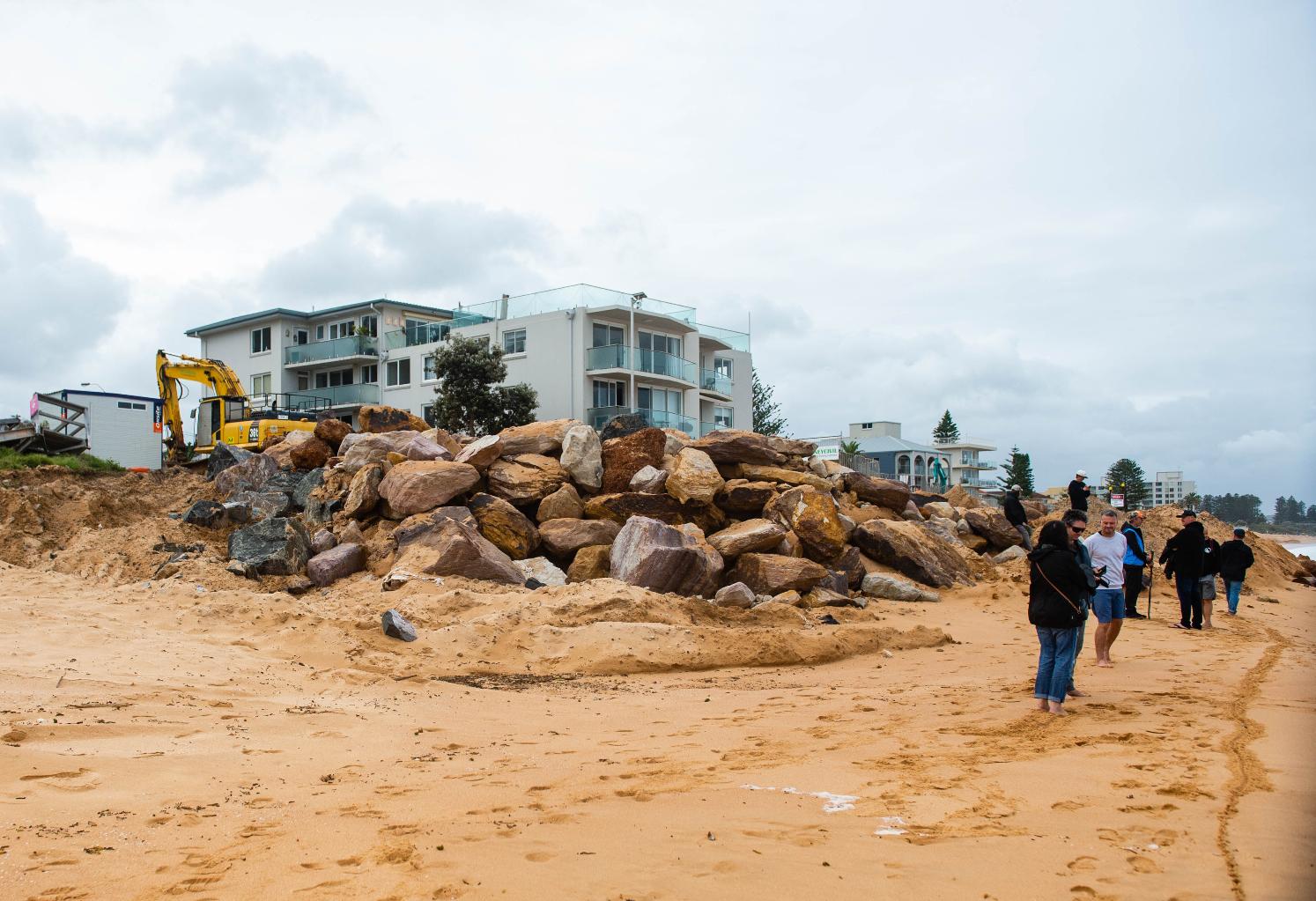 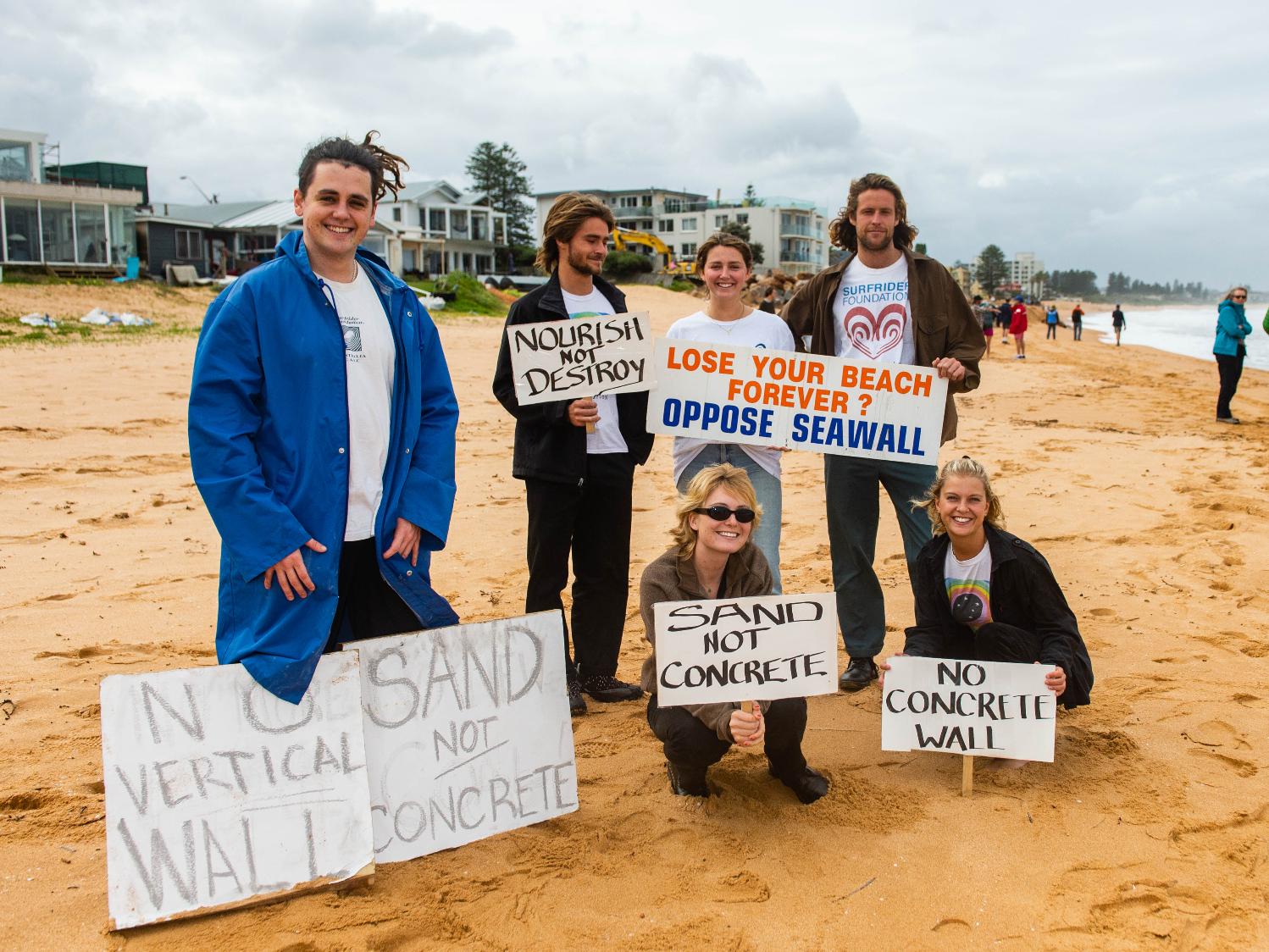