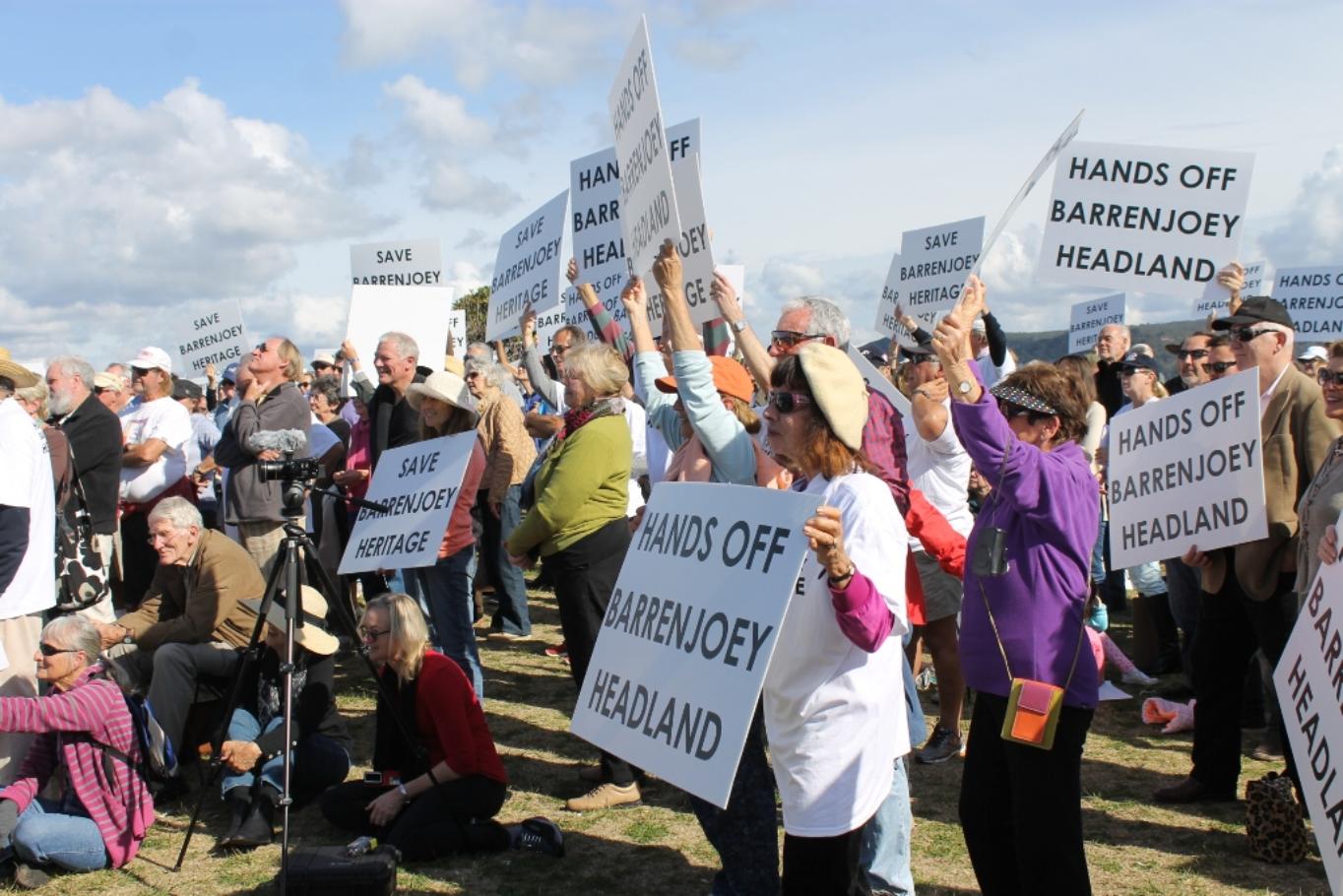 In 2013, a plan to commercialise Barrenjoey Headland and its cottages, plans which would have meant excising this popular spot from the public for private use, rallied the local community into vehement opposition. A rally was held, backed up by Pittwater Council, to ensure the state government understood the opposition to this idea.

Over 9000 signatures from residents and from all over the world were added to a petition opposing the move.

Now the idea is up for feedback again, although versed in more innocuous terms, to begin with.

Pittwater MP, The Hon. Rob Stokes stated then he is strongly opposed to any changes to the Ku-ring-gai Chase National Park Plan of Management which could adversely impact on Barrenjoey Headland’s unique environmental and heritage characteristics.

“This certainly isn’t an area of Pittwater which can be casually fiddled with,“ Rob Stokes said, “Barrenjoey Headland has enormous environmental and heritage significance and any management changes must be thoroughly considered. “Whilst some alterations or improvements may be necessary – nothing should be done which may change or ruin the unique character of the area.'' 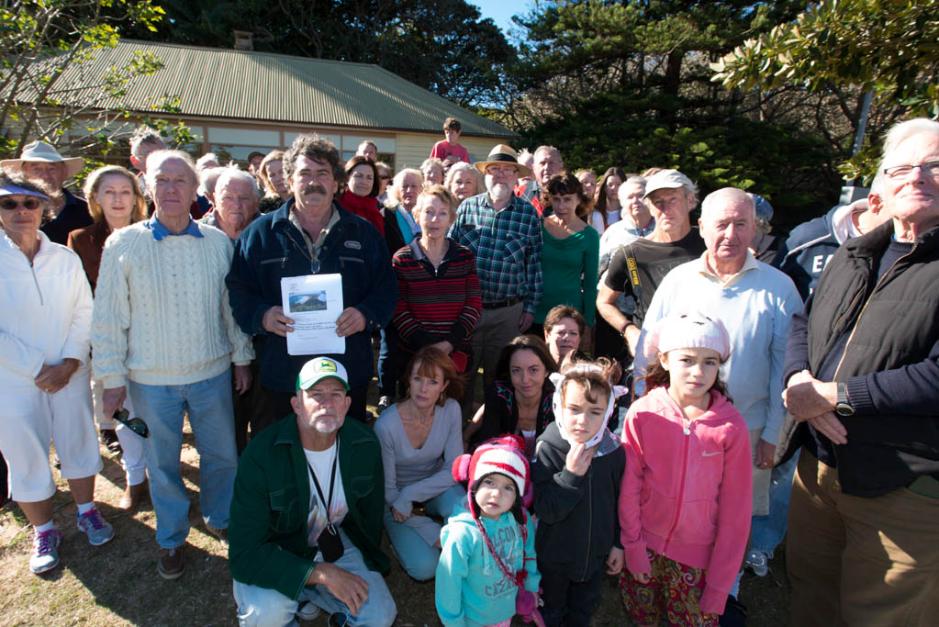 Palm Beach and Whale Beach Association members and the upcoming generation gather at the Boatman's Cottage, Barrenjoey in 2013. Photo by Michael Mannington, 2013.

Community outrage and commitment to fight against the proposal for as long as it took to see it reversed succeeded; in August 2013 an announcement was made by then Environment and Heritage Minister Robyn Parker and Pittwater MP Rob Stokes that the proposals would be canned.

“Communities around five similar lighthouses along the NSW coast, at Byron Bay, at Smoky Cape and Seal Rocks on the mid north coast, and at Montague and Green Cape on the Far South Coast have welcomed the sensible restoration of the buildings. Montague Island has won many environmental tourism awards and guests contribute to habitat restoration for the little penguin colony.

However, 2016 research by Pittwater Online News shows there are currently six lighthouse facilities you may rent out: Cape Byron, Montague Island, Smoky Cape, Green Cape, Norah Head and Sugarloaf Point (also known as Seal Rocks lighthouse) and when they are, most of these 7 days a week 12 months of the year, the public and local community is excluded.

The Cape Byron Lighthouse precinct is open 8am to sunset. The Assistant Lightkeepers cottages are available to hire on a day, or days or weekly basis, 7 days a week. Cape Byron Lighthouse precinct, as with many of these others listed is also available for events and function hire, such as weddings, and during these times exclusive, (or excluding the public), access is guaranteed.

As a unique Wedding venue, as listed on the Sugarloaf website, the promise is, "Your booking ensures exclusive use of the cottages and their grounds… giving you three outdoor and indoor options for your wedding ceremony." At Sugarloaf the Head Keeper's and both Assistant Lightkeepers cottages are available. They may be rented as single structures or people may rent all three. Vehicles are permitted to drive to the cottages for loading and unloading. In Summer a minimum of 7 days booking is required, while Easter and Spring and Autumn require a minimum of three days for a weekend booking and four days for a 'midweek' booking. What is termed as 'Whale Season', which we are heading into now (May to September) attracts a rate close to that charged during Summer peak holidays. Minimum booking of days also applies to other rental lightstation premises.

After the 2013 'small victory' Members of the Palm Beach-Whale Beach Association warned 'you watch, this will come up again - they will have another go at doing this'.

In 2016 the idea was revisited, with the public given a month to respond. That proposal presented Architectural Drawings for plans to develop accommodation in the Keepers cottages, Fishers Cottages and Boatman's Cottage on Barrenjoey Headland. No Specifications detailing a description of the proposed works were published with these, as is usual when providing architectural drawings.

The architectural drawings showed a 30-40 person bed count, an extension outwards of the fencing around the Boatman's cottage, 'stepping stones for high tide' along the beachfront to the Fisher's cottages, 2-4 units replacing the Fishers cottages within two structures, extensive remodelling and redecorating within the Keepers cottages and installing 'privacy screens' on same.

The public was to be excluded from these structures, and areas around them, whenever they are rented out as 'short term accommodation'; (2-3 days or by the week).

The statement also communicated; "We have not excluded the provision of spaces within some of the buildings for community use and small scale gatherings."

In August 2019, as part of preparing another new plan of management, the NPWS released five discussion papers exploring some of the key management themes that will be included in the new plan.

The Discussion papers once again to the use of the buildings on Barrenjoey Headland along with others with the Visitor destinations - 1.1MB stating ''In 2016 NPWS exhibited a draft Barrenjoey Head Concept Plan with options for improved site access including short-stay visitor accommodation, improved interpretation of the site and the installation of public toilet facilities. This discussion paper provides an opportunity for the community to provide further feedback on ways to manage the precinct.'' and asking the question ;'What new or improved visitor facilities or visitor experiences, if any, would you like to see at Barrenjoey Precinct?'

The Discussion paper on  Leases, licences and consents - 1.4MB explained that 'Commercial activities in parks are managed according through one of the following types of agreements' and listed examples, including the first in this list as;

' A lease: a formal agreement between NPWS and an entity for ongoing exclusive rights to occupy and use land or a facility for five years or longer (even if that use is not 24 hours a day, seven days a week)'.

This paper asked 'What commercial visitor services and events would you like to see offered in the park?'

The Document states that Barrenjoey Head has been connected to water and sewer mains - the concept plans for an amenities building released for feedback until May 2nd, 2022 states on that webpage in answer to its own question;

What's happening with the lighthouse and keepers quarters?

''The lighthouse is open for guided tours. There are no plans to change the existing use or increase access to the lighthouse or historic buildings on the headland.''

However, page 7, Table 2 of the 2022 the Ku-ring-gai Chase National Park and Island Nature Reserves Draft Plan of Management states, the follow-on from those 2019 discussions papers, states;

Lighthouse Keeper’s Cottage; NPWS and/or community use, including visitor tours

The Basin's Beechwood Cottage, currently used as a Group function venue, is also listed for a 'Potential new or additional use';  community and/or visitor services (e.g. short-stay visitor accommodation,  hospitality venue1) 1 means a Hospitality venue, a café, kiosk or restaurant. The Basin House, currently used as a NPWS Staff office, functions and tour operator use, is also proposed as 'Additional visitor services such as short-stay visitor accommodation'.

In regards to mountain bikes, there is also a proposal in the document which states, 'New tracks and trails - Assess new shared-use trails for horse riding, mountain biking and bush walking.'

In August 2020 Pittwater Online News forwarded to the NPWS footage of a wallaby being run over on an illegal bike track at Ingleside. There has been no reply - as yet.

The Northern Beaches Councils'  ‘Open Space and Outdoor Recreation and Action Plan' sought feedback in August 2022, with most of this document focused on the council's proposal to formalise illegal mountain bike tracks in our area, including those in Ingleside Reserve and adjacent National Parks areas.

There are similar proposals for Turramurra Lodge and Mount Colah Lodge at Mount Colah and Turramurra national park entrances and Bobbin Head's Bobbin Inn, currently used for Visitor information and a café is proposed to have 'Additional community or commercial use (e.g. function hire, hospitality venue)' while the Small sandstone kiosk adjacent to the wharf carpark is mooted for 'Community use or visitor services (e.g. hospitality venue1 and/or equipment hire)'.

On September 30, 2022, one week after the new Draft plan was made available, The Hon. Rob Stokes stated he will not be standing for the seat of Pittwater at the March 2023 state election.

'The public almost always opposes permanent accommodation in parks, whoever owns it, based on the belief private lodges and camps should be on private land.

But state governments in New South Wales, Queensland, Tasmania and South Australia have enabled this regardless. Think of the pristine Ben Boyd National Park near Eden in NSW, slated for eco-tourism cabins at the expense of campers.'

Private developments exclude the wider public, both physically and financially.'

The NSW Department of Planning and Environment webpage with the draft documents is available at: www.environment.nsw.gov.au/topics/parks-reserves-and-protected-areas/park-management/community-engagement/ku-ring-gai-chase-national-park

The base of the NSW DPE webpage states in answer to its own question; When will the plan of management be finalised?

The Minister considers the plan, submissions and advice, makes any necessary changes and decides whether to adopt the plan under the National Parks and Wildlife Act 1974. Once a plan is adopted, it is published on the NPWS website, and key stakeholders, including those who made a submission on the draft plan, will be notified.' 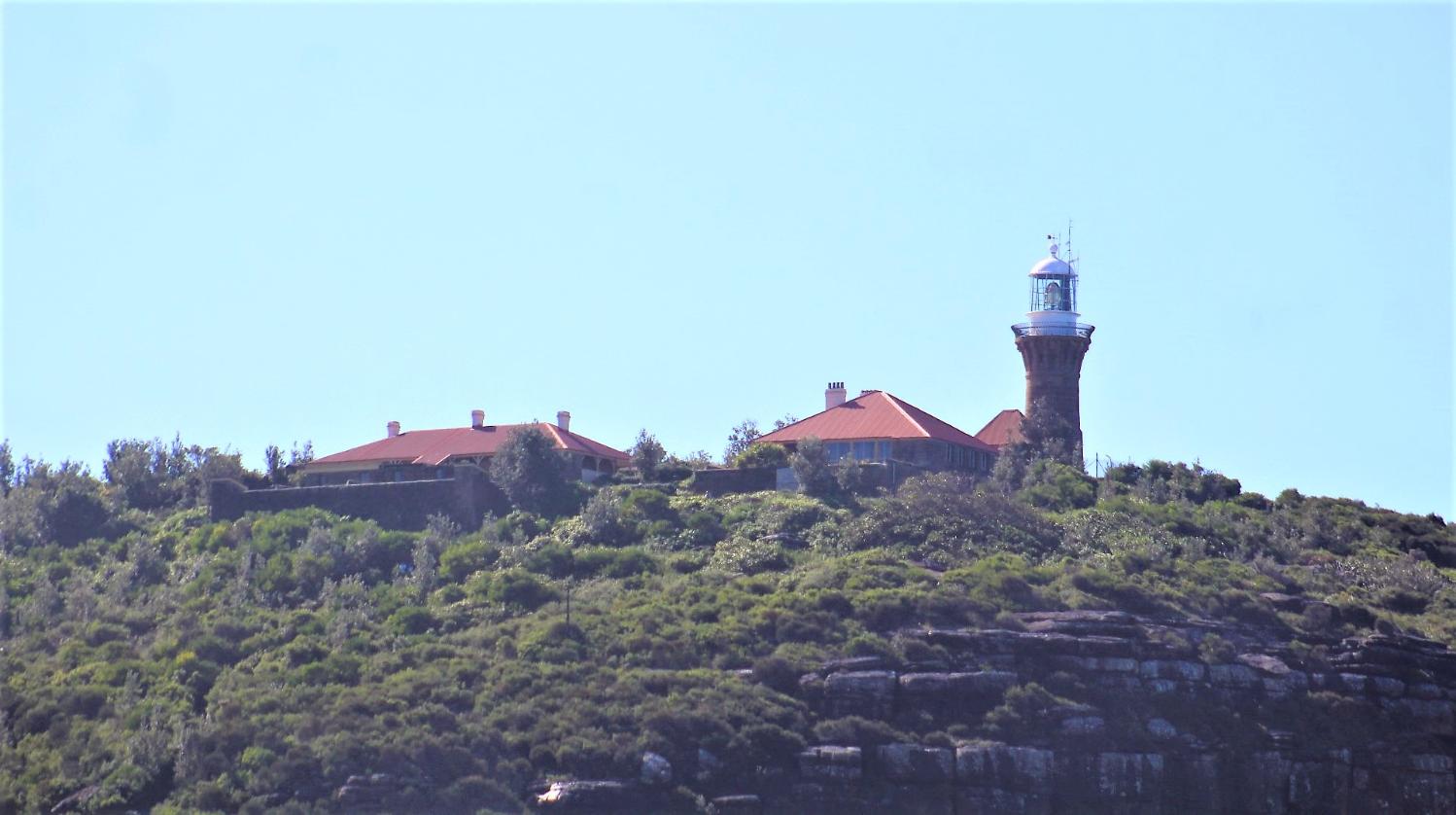