PITTWATER. Commemorative Cairn. TO BE UNVEILED TO-DAY.
(BY G. A. KING.) 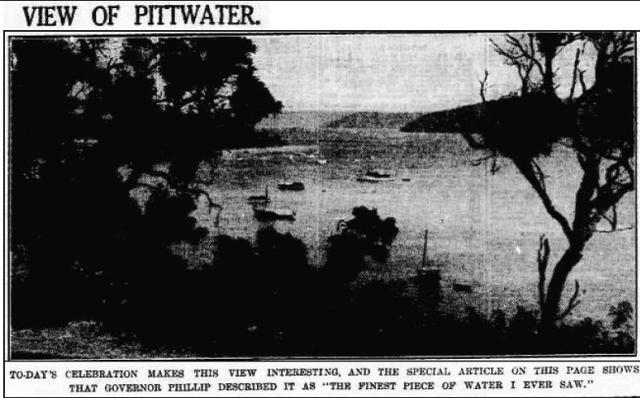 CAIRN ‘stone marker’ from Scottish Gaelic ‘karn’. A mound of stones erected as a  marker or memorial. 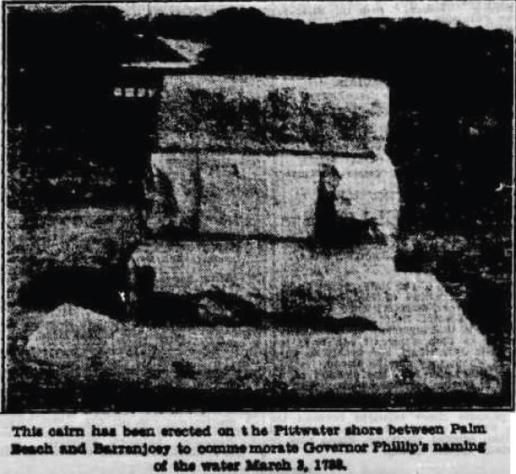 Erected beneath Barrenjoey headland, in Governor Phillip Park and unveiled on Saturday, September 28, 1929, was a marker to commemorate the naming by Governor Phillip of what we call today Pittwater.

PITTWATER MEMORIAL TO BE UNVEILED TODAY.
The cairn to commemorate the naming of Pittwater by Governor Phillip on March 3, 1788, will be unveiled at Governor Phillip Park, Palm Beach, at half-past three o'clock this afternoon by Rear-Admiral Evans.

After the ceremony the party will pay an official visit to the Barrenjoey Lighthouse. The party will then return to the Royal Motor Yacht Club, Broken Bay clubhouse, where a dinner will be held, to be followed by a dance. The Broken Bay fleet of yachts willbe lined off the cairn at Palm Beach.

PITTWATER. CAIRN UNVEILED. ADMIRAL PRAISES PHILLIP.
"We read of Captain Arthur Phillip as the first and greatest Governor of Australia, and today we, just one little group of his admirers, gather to pay tribute to his name by the simple ceremony of unveiling a cairn. If Governor Phillip were asked to find an expression for this particular occasion, he would probably have said in his simple, straight-forward way, 'God bless our Empire, advance Australia, God save the King,' and in the same spirit I, who am but a humble twentieth century sailor, am honoured and delighted to perform this unveiling ceremony."

In those words, Rear-Admiral Evans, commanding the Royal Australian Navy, on Saturday afternoon unveiled a cairn erected beneath the shadow of Barrenjoey headland to commemorate the naming of Pittwater by Governor Phillip on March 3, 1788. The memorial was erected by the Manly, Warringah, and Pittwater Historical Society, and the president of the society (Mr. W. L. Ross) presided at the unveiling ceremony. Many members of the society attended, and there were also present the Minister for Works (Mr. Buttenshaw), Mr. Archdale Parkhill, the Chief City Commissioner (Mr. Garlick), Mr. P. W. Gledhill (honorary secretary of the Manly Historical Society), and representatives of the Warringah Shire Council, and the Manly Municipal Council.
Rear-Admiral Evans was escorted from the Broken Bay clubhouse of the Royal Motor Yacht Club to Palm Beach by a fleet of yachts, which anchored off the cairn during the ceremony.
In unveiling the memorial, Rear-Admiral Evans congratulated the Manly Historical Society, the members of which, even in these days of materialism, united in their minds and ideals the sacrifices and the splendid constructive patriotism of the sailor-explorers of the past with the aims, hopes, and purposes of today.

"Today," added Admiral Evans, "we are paying tribute to an Englishman of the pre-Trafalgar days, who helped to found dominions and who was one of the really great. In this gathering, nearly all Australians, are folk who look back upon the history of Captain Arthur Phillip's Governorship with a sense of pride and gratitude, as one of the founders of Australia that we know and love so well. Nowadays we have great ships, electric light, cooling apparatus, ice chests, and sweet water from distilling plants, with powerful engines to keep us off the rocks-we even have our own dental surgeons and cinemas on board -but the old-time sailors had none of these. They were baked alive in the sun, parched for want of water, fever-stricken in the Islands, scurvy-smitten on long voyages, and often murdered upon landing, like the valiant Captain Cook. Governor Phillip, who was one of the greater sailor-pioneers, learnt his qualities of leadership and sound administration in a very hard school-the school of tall masts and howling gales, whilst he learnt his patience in tropic seas and trying cairns, and like many other sailor-explorers and servants of Empire, all of his herculean courage and cheerfulness came to him from his sea training."
The party subsequently inspected the Barrenjoey lighthouse. In the evening the Admiral was entertained at dinner by the Royal Motor Yacht Club.

The Manly Warringah Pittwater Historical Society, whose first speaker this year is Margaret Millar, a lady who contributed to our Remembrance Day articles in 2011, is owed a debt of gratitude by all on our Peninsula. Since 1924 the members of one of Australia’s oldest suburban historical societies have sought to communicate some of the breaths and footsteps of those who came before us.

Pittwater Online News contends that the naming occurred on 5th of March in Governor Phillip Camps On Resolute Beach.

BARRENJOEY PENINSULA.
On Saturday afternoon about 60 members of the Royal Australian Historical Society visited Barrenjoey Headland, and inspected the various spots with historical interest along the peninsula. These dated back to the time of Captain Phillip, whose naming of Pittwater had been commemorated by the erection of a cairn, the work of the ManlyWarringah-Pittwater Historical Society. This society also placed a cairn on the site of the first lighthouse on the headland, and recently erected the Gledhill Lookout on the highest point. The visitors were taken to these places and subsequently shown over the Barrenjoey lighthouse.
BARRENJOEY PENINSULA. (1935, October 28). The Sydney Morning Herald (NSW : 1842 - 1954), p. 5. Retrieved from http://nla.gov.au/nla.news-article17220905

NB: Gledhill Lookout/Cairn was made from original lighthouse sandstone.

BARRENJOEY LIGHTHOUSE.
Historic Visitors' Book.
Stiff-limbed old men, grey-haired women athletic Girl Guides and youths climbed the precipitous heights of Barrenjoey on Saturday afternoon to witness the official handing over of the lighthouse visitors' book to officials of the Manly-Warringah  and Pittwater Historical Society.
On August, 13 1932, the light was converted to the automatic system, and from then no keeper has been on the station Saturday's was consequently the last public inspection of the lighthouse, which has attracted 19,000 people since 1881
It was in a spirit of sadness that the visitors on Saturday signed the book and slowly filed up the stairs. Many found interest in the gaunt brick building which housed the lighthouse keeper, and is now deserted, a departmental "to-let" notice adorning the front window.
Captain M J Lowe (president of the Manly Warringah-Pittwater Historical Society, said  that the society was determined to leave no stone unturned in keeping matters of historical Interest before the public
The Minister for Commerce (Mr Stewart), in handing over the book praised the work of the society
The secretary of the society (Mr W Gledhill) read an interesting paper on the history of the lighthouse. This revealed that it was erected in 1881 at a cost of £16,695 The man responsible for the establishment in 1807 of a permanent beacon light at Barrenjoey was Mr R Stewart, M L A. During the erection of the present structure, two men lost their lives.
Captain Williams, deputy director of navigation and lighthouses said that the new light required nothing more than daylight to operate the sensitive valve controlling the functioning of the light
In future the visitors' book will be available for inspection at the Manly Art Gallery,
BARRENJOEY LIGHTHOUSE. (1933, March 27). The Sydney Morning Herald (NSW : 1842 - 1954), p. 8. Retrieved from http://nla.gov.au/nla.news-article16965450