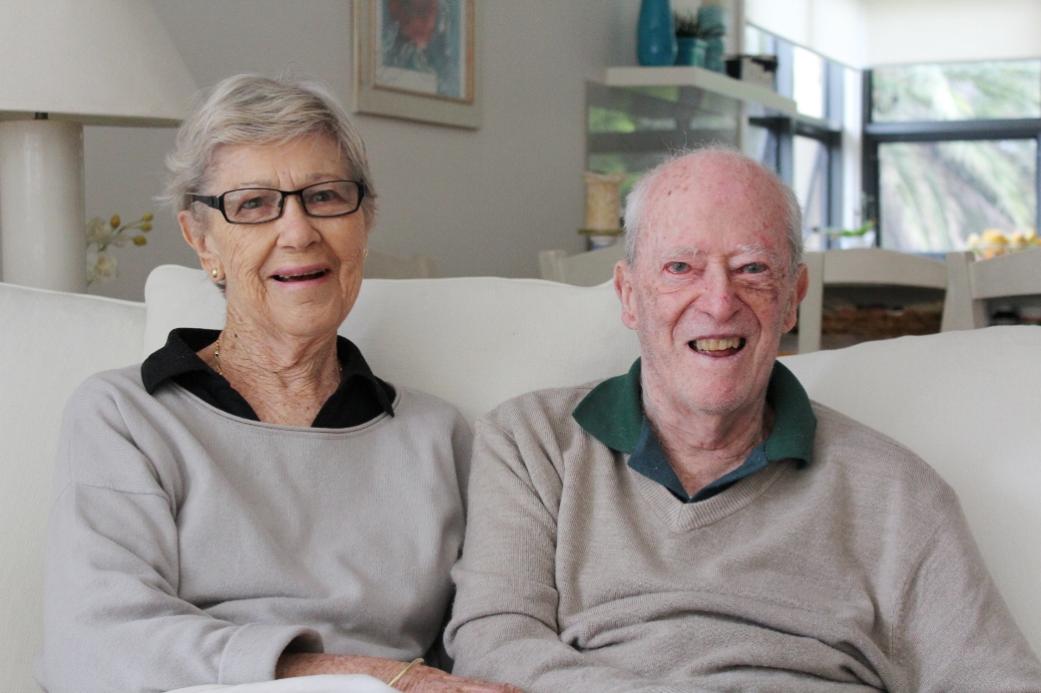 Avalon Beach SLSC’s first 60 Year Service Awards went to Life Members Max Watt, Doug Crane, Ken Davidson, Don Imison and Reg Wood in 2006, 11 years ago.
In 2003-04 when Doug was in his 70’s, he retired from patrols and the last Sunday swim for the year was renamed The Doug Crane Classic to honour him. Usually held on the same day as the Nipper’s Christmas party, winner’s names are engraved on the Doug Crane Classic paddle displayed in the Clubhouse’s Hall of Champions.
In 2016 Doug Crane’s Patrol Members and life members, Don Imison and Ken Davidson started the event, again, and helped Joan, Mrs. Crane, with presentations. A few weekends ago Ken and Don joined fellow Life Members at an annual lunch in the clubhouse. 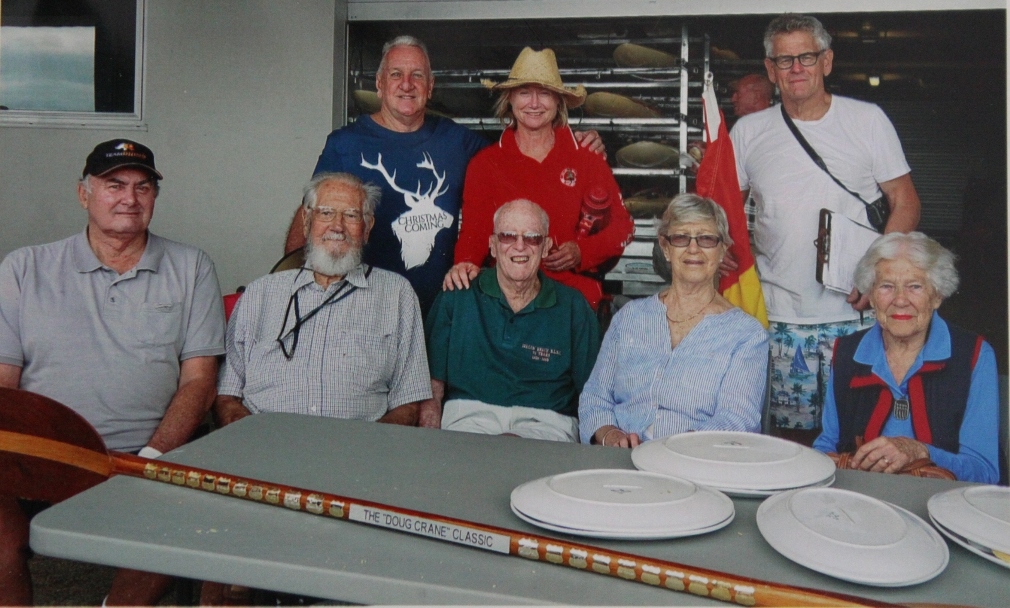 A Doug Crane Classic Photo from a few years ago. L to R: Roland Luke, Ken Davidson, Warren Young OAM (back) Don Imison, Christine Hopton OAM(back) Beryl Imison, Tim Hixson, Joan Crane
Don has seen the earliest and newest versions of this clubhouse. He’s also seen Avalon change from horses that take themselves for an amble down roads made of dirt to traffic lights. Beryl has seen days when there were lots of birds, then years when there were none due to all the developments and cutting down of trees, to now, when there are many more again. She served soft drinks at the clubhouse when The Stomp was all the rage. She served cake and tea and coffee to those who came to Avalon Beach SLSC to film that 1963 version of Bandstand.
When and where were you born?
At Drummoyne, November 5th 1927, I’m 90 years old now. I grew up in Drummoyne from Primary right through to 6th class. I then attended Ultimo Technical College and went on, while working, to get an Engineering Degree.
Where did you go to work?
I went to Nestlés, which was at Abbotsford in those days and sitting on the river as well then.
I then got a message from the head Office stating that they wanted me to go to Smithtown at Kempsey to build up things out there – this was 1950. The Tool Manager there took me over and said I should join the local Surf Club. So I joined South West Rocks SLSC (http://www.swrslsc.org.au/) and it rolled on from there. I got my Bronze Medallion at Kempsey.
I was there for just over 12 months and returned to my parents place at Cremorne and went from there straight down to Avalon Beach SLSC. I did around 8 years as the Secretary there before settling down to married life – Beryl and I have been married for over 60 years now.
MR. DON IMISON left on Monday last for Sydney, where he will spend a few days with his parents, before sailing for Tasmania. Don is on holidays from Nestles', Smithtown, where he is a Fitter and Turner. SOCIETY (1951, February 9). Macleay Argus (Kempsey, NSW : 1885 - 1907; 1909 - 1910; 1912 - 1913; 1915 - 1916; 1918 - 1954), p. 2. Retrieved from http://nla.gov.au/nla.news-article234501834
How did you first visit Avalon?
My brother in law, Reg Wood, was already a member down here. He’s Marjorie’s husband.
Where did you meet Beryl?
At her sister’s Engagement Party to Reg.
Beryl worked at Abbotsford – at the Nestlés factory too. Beryl worked on the machine where they trim it down and send it on. We married in 1956.
Did you get free chocolate?
Don: you could eat as much as you wanted while at work.
Beryl; And there was a shop with discounts.
Reg recently sent us in some anecdotes about the 1956 Avalon Beach SLSC Carnival where locals witnessed Americans surfing across the waves – do you remember that?
Yes, I remember all of that, I was there that day. It was good. I was just finishing my Apprenticeship then and had become a fully fledged Tradesman.
I didn’t surf myself, I was a swimmer. 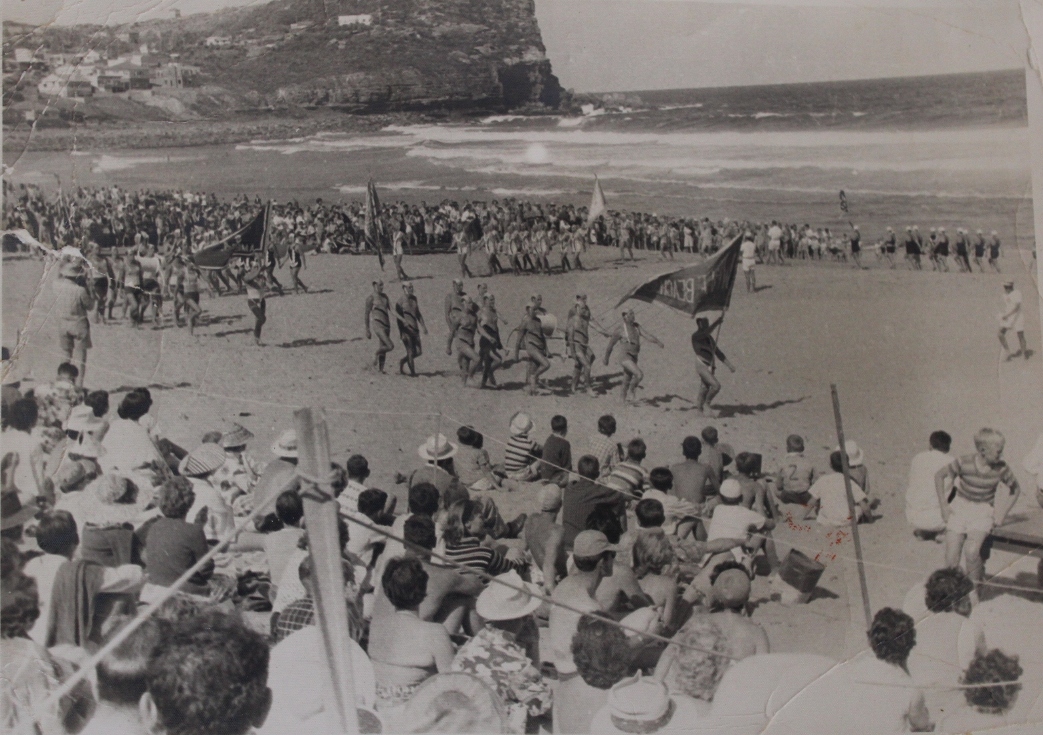 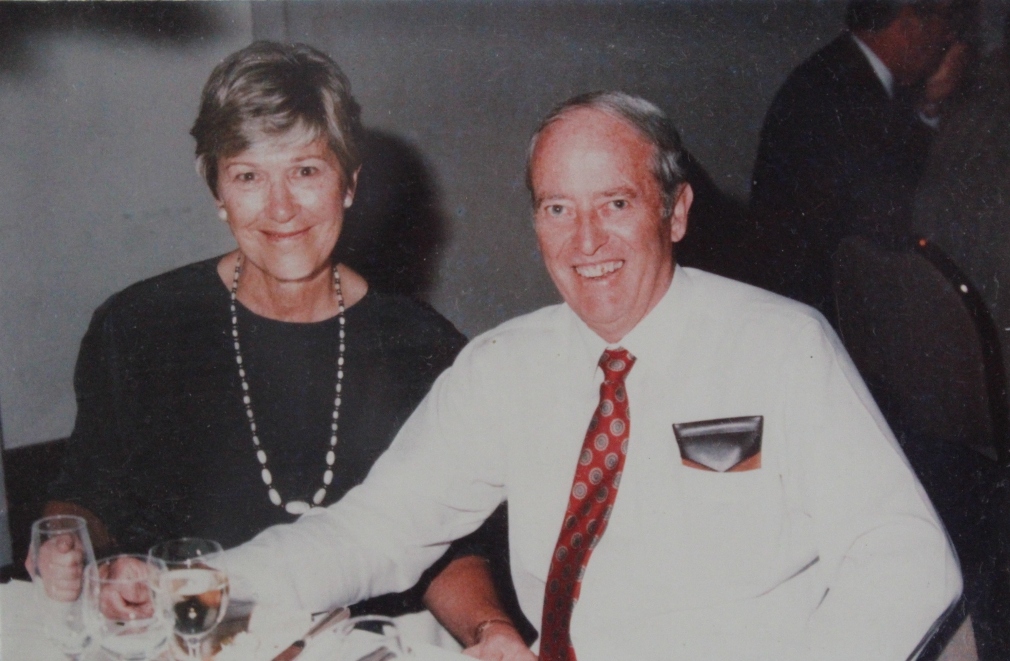 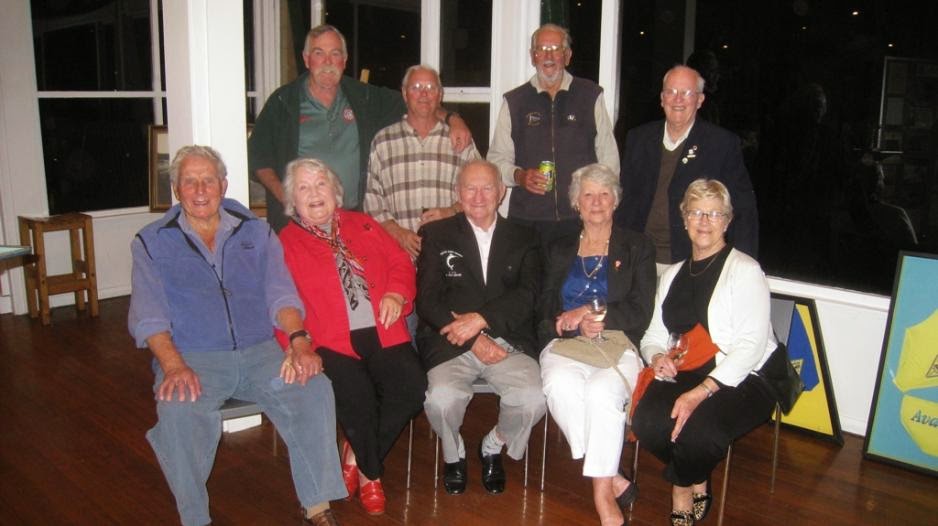 Front row: Max and Norma Watt, Reg and Marj Wood, Beryl Imison.
Rear:  Brian Friend, Keith Feehley, Ken Davidson, Don Imison.
What has been the best part for you two of being involved in Avalon Beach SLSC?
Don: The friendships you make, these have lasted a long time. It has also kept me fit, getting in the water.
I enjoyed being part of the boat crew. In that period you had to do something else to keep it all going. We were lucky if we had ten blokes on Patrol, there just wasn’t the strength of membership then. A lot didn’t have the approval to go on Patrol, hadn’t earned their Bronze yet.
Beryl: I didn’t work until our children were older, my daughter was 7 and Jeff was 9, so it gave me contact with the rest of the community. I then got a job at the shoe shop in Avalon, Richard’s Shoes, and was there for 34 years.
What were the women doing Beryl?
Beryl: We used to sleep in the boatshed when we first started coming down here. It was a bit draughty at times and you had rat visitors but you didn’t care because you were so tired after a busy day on the beach.
Don: Then we got the unit above the shops in Avalon Parade and would stay there.
Beryl: We used to sit out on the verandah and watch the world go by. We used to make all our sandwiches up there, cook our cakes. The Carruthers owned that I think, they were involved in the surf club, so they let members use that when on patrol or doing things for the club.
There was a little old Scottish lady, Mary, who used to work in the milk bar – everybody loved her, she used to put extra chocolate on the ice creams for the boys
How did you build up the membership Don?
It just happened really; more people moving into the area and wanting to get involved.
Beryl: Reg Wood also brought along a lot of his friends from the Police Boys Club too.
What are you favourite places in Pittwater and why?
Don: We’d go fishing with Ano (Max Watt) and have no trouble at all landing some beauties. Out off the rocks at Avalon was our favourite spot.
Beryl: we lived on fish, loved it. He just loves Avalon, the whole lot. There’s great people here.

Avalon Beach SLSC - The First Clubhouse
Avalon Beach SLSC The Second and Third Clubhouses
The Sydney suburb of Abbotsford was originally part of Five Dock Farm and when subdivided in 1837, was called Feltham. Sir Arthur Renwick, a doctor, philanthropist and politician, built his home here in 1890 and called it Abbotsford House in honour of the residence of historical novelist and poet, Sir Walter Scott. Renwick sold his property in 1903 to Albert Grace, and in 1918 it became the site of a Nestlé chocolate factory, with the house used initially for chocolate production and later as their administrative offices. The factory was closed in 1991, after which the area was redeveloped as the medium-density Abbotsford Cove housing complex.
South West Rocks SLSC was formed in 1919 and has operated continuously ever since. The club is a community organisation run by volunteers who are dedicated to protecting members of the public who surf and swim at our beaches. We conduct patrols on weekends and public holidays during the season from October to April each year.
SWEET HEALTH
Nestle's Products
Nestles chocolates are known all over the world, and a pleasing display of some of their fancy boxes may be seen in the vestibule at the State Theatre, where they are on sale. Amid charming surroundings at Abbotsford, on the Parramatta River, stands Nestle's Chocolate Factory, the home of Nestles chocolates.
The various buildings are situated in twenty-two acres of picturesque grounds, and are surrounded by lawns and gardens — a truly ideal settling for such a factory. About 800 hands are employed in the factory, where they work under the most ideal and hygienic conditions. Tennis courts, a cricket oval, and dance hall are provided, where the employees may spend their leisure hours., A rest room and trained nurse are also provided. The very latest machinery has been installed to cope with the. increasing demand for Nestle's chocolate and cocoa products. The Nestle an'l Anglo-Swiss Condensed Milk Co. (Ansr.). Ltd.. are also the manufacturers of Nestle's and Gold Medal sweetened condensed milk, unsweetened milk, lactogen. malted milk, and cocoa.
All these lines are household words, not only in the Commonwealth, but in all parts of the world, and it is because they are made by the most improved methods under perfect hygienic conditions, which ensure absolute purity and maximum nutritive value, that they are second to none other. The manufacture of lactogen, in itself, is a model Australian industry. The use of dried milk, such as laotogen, the well-known baby food, is a fairly recent development, being first introduced in Australia about twenty years ago. Since then it has been employed to an averincM-pasing extent all over the world. The showroom installed in Nestles' new offices in Foveaux-street. Sydney, close to the Central Railway Station, is worth a visit. Here a full range of Nestles' high-class lines may be seen in a natural setting, the showroom having been designed for attractiveness' and for convenience of customers, who are thus able to view samples of the company's produts. The research laboratory is one of the most modern and best equipped in Australia, and strict control over all products is maintained. This department is the keystone of the Nestle's company. SWEET HEALTH (1929, June 9). Sunday Times (Sydney, NSW : 1895 - 1930), p. 25. Retrieved from http://nla.gov.au/nla.news-article131635582
NESTLES AN INDUSTRY OF NATIONAL IMPORTANCE IN PEACE AND WAR.
STARTING at Toogoolawah (Queensland) in 1908, Nestle's have rapidly extended their activities throughout Australia. Factories and condenseries have been established in New South Wales, Victoria and Western Australia. There are imposing offices in every capital city of the Commonwealth. This means employment for thousands of Australians and an enormous annual salaries bill. The purchase of raw materials also reaches a very high yearly total, while thousands of pounds are spent on printing, cartons and transport. Illustrated in this advertisement are some of Nestle's Australian activities. At foot of page is the chocolate factory at Abbotsford — the largest of its kind in the Southern Hemisphere. In the oval at right is an aerial view of one of Nestle's Victorian factories — this is at Dennington; another is at Maffra. Next comes Nestle's New South Wales Condensery at Smithtown on the Macleay River. Immediately below, we see Nestle's factory at Waroona, Western Australia. These pictures indicate the extent of the industry and its importance in the industrial development of the nation.

The maintenance of an hygienic supply of milk foods is vital to a nation's well being. Years of unfailing quality in the manufacture of such foods has rendered the name of 'Nestle's' synonymous with purity, richness, nutriment and value. 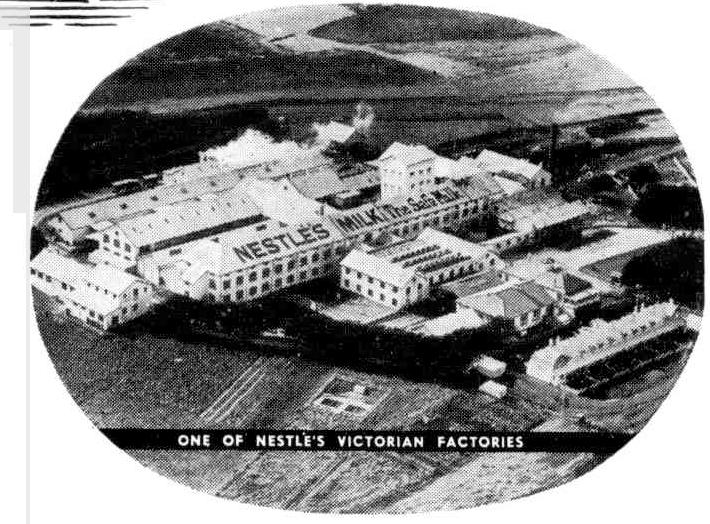 Nestle's insistence on ingredients of the highest quality has, in turn, exerted a profound influence on the Australian dairying industry. Many thousands of gallons of the purest, richest milk this country produces are processed daily at Nestle's modern and spotless factories. In peace and war, Nestle's are proud to  be described as an essential industry . . . — proud to know that their products contribute so constructively to the welfare of the individual and of Australia.
THE GOODS PRODUCED in Nestle's factories and condenseries make an imposing array, and include Condensed Milk, Ideal Unsweetened Evaporated Milk, Sunshine Full Cream Powdered Milk, Concentrated Milk, Sterilised Cream, Lactogen, Vi-Lactogen, Malted Milk, Cremonne, Bettabred, Milo, Cheese, Cocoa, Coffee & Milk, and numerous forms of Chocolate. In the manufacture of all these products the highest standard of quality is consistently maintained. The scope of Nestle's operations, as indicated by the accompanying pictures, and the products produced make it possible to offer unsurpassed quality at the lowest possible prices. In so doing, Nestle's are rendering a vital service to the people of Australia. 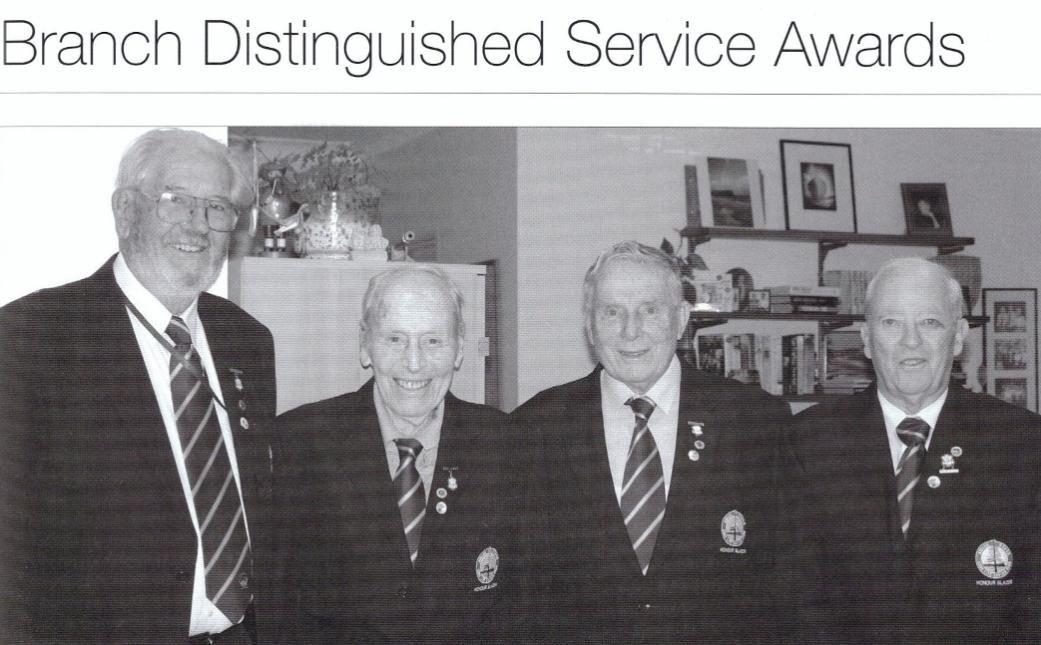