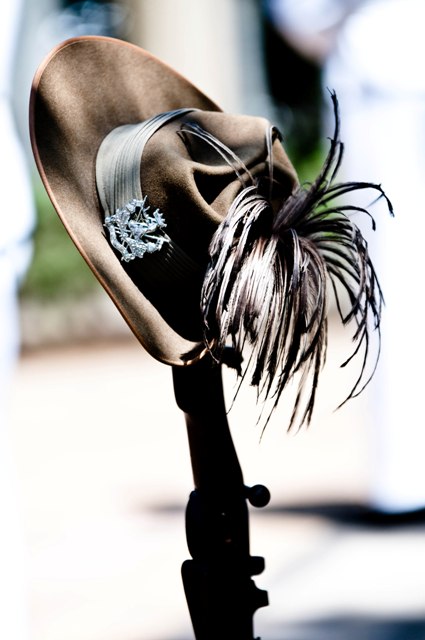 Above: A Memorial Tribute of a 303 rifle with the bayonet, the slouch hat which has a plume, and the sabre which saw service at Beersheba, Gallipoli, the UK and the Western Front kindly provided by Robert Dodds and family, to whom they belong. All these pieces are in a museum at Parramatta Lancers.
http://www.lancers.org.au/

Below: Mrs Peggy Williams, OAM and President of the AWLA NSW. Photos by Michael Mannington. 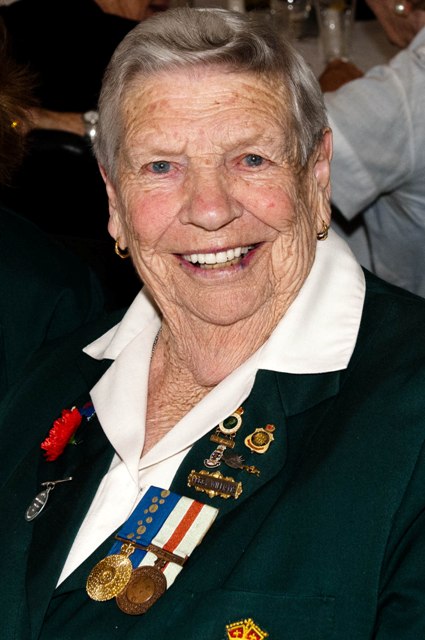 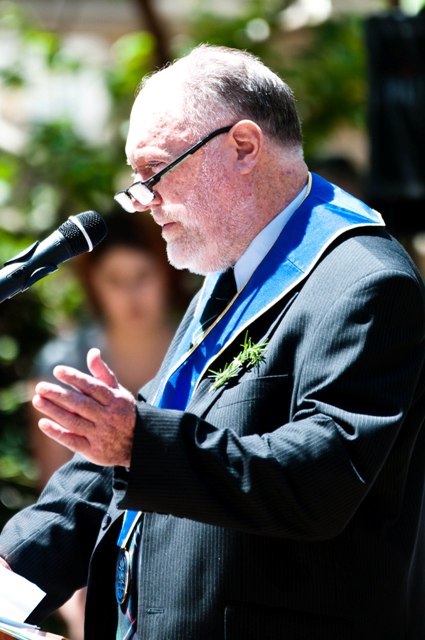 Above: Mayor Rose gave the Remembrance Day Address, Image by Michael Mannington. Below: those who gathered. Below this; Lighthorseman's Sabre, owned by Robert Dodds grandfather's. 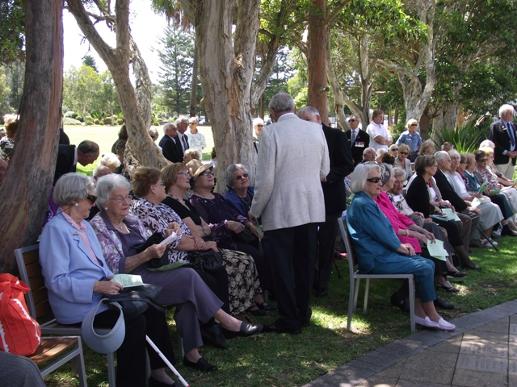 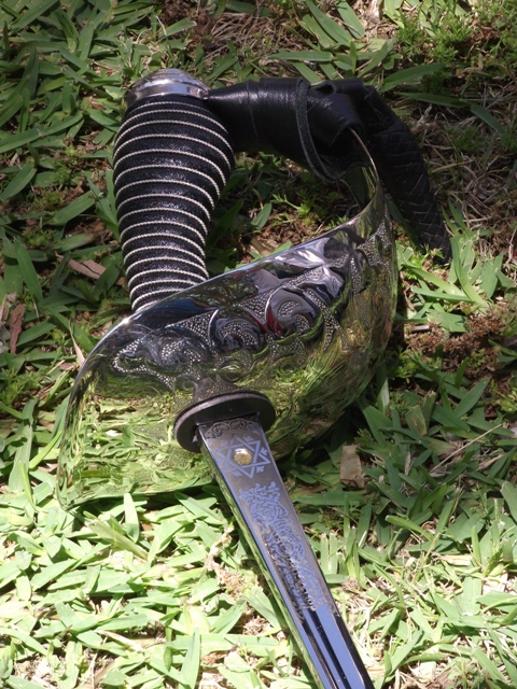 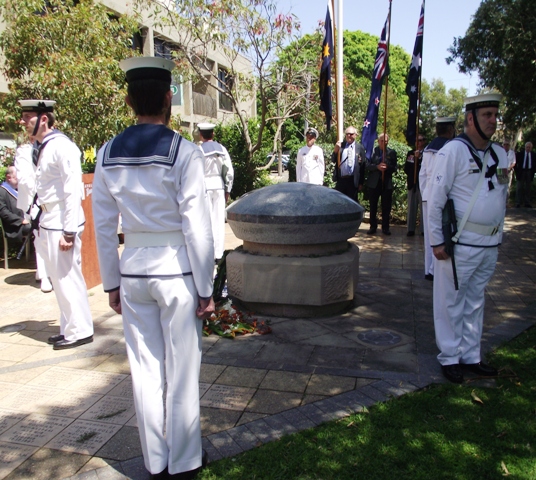 Every year, on 11 November at 11 am – the eleventh hour of the eleventh day of the eleventh month – we pause to remember those men and women who have died or suffered in all wars, conflicts and peace operations. Beginning in 1919 as Armistice Day to mark the end of WWI in 1918 and remember all those who had died in this terrible conflict, November 11th  became Remembrance Day after WWII to commemorate all those who had died in both these wars. Now each November 11th is Remembrance Day for all who have died or been injured in any conflict Australians have been involved in. A minutes silence is observed to reflect on the loss and suffering of war and to stand in tribute to all the men and women who have lost their lives on battlefields.

The Avalon Beach RSL ceremony for Remembrance Day 2011 was very moving. Conducted by President of the Avalon sub branch, Commodore Graham Sloper AM RAN Rtd., with an honest and articulate formal address from Councillor Rose, our Mayor, a bright blue day and soft breeze interspersed by melodic currawong calls did detract from the respect accorded those we have lost in conflicts and the sober quietness in which all who attended listened. Beginning promptly with the Catafalque Party march on, who are all members of Avalon sub branch, a program of prayers and hymns allowed guests, wives and Service personnel to commemorate all those we have lost in conflicts.

After welcoming Councillor Harvey Rose and Mrs Wilga Rose, Councillor Bob Grace, Mrs Peggy Williams OAM, President of the Women’s Land Army of NSW, and her husband Ces Williams OAM, who after a distinguished career in the Navy became head of the NSW chapter of the Naval Association, and the guests of honour, who were the Legacy Widows from Mona Vale to Palm Beach, Commodore Sloper Rtd.  restated the importance of this day to every Australian;

Today we remember those, who in the great tragedy of war, gave their lives for Australia, for the freedom of all people. We honour all those who fell, in the air, on the sea and on the land and our loyal friends in the Commonwealth and Allied Forces. We think of every man, woman and child who died so that the lights of freedom and humanity might continue to shine. May we and our successors prove worthy of their sacrifice.

Our Mayor brought tears to a few eyes with his sincere and frank tribute to all Australians lost in all conflicts. His insistence on reiterating the exact numbers, ‘because they’re all people, all individuals’ resonated a determination to honour every single one. Mayor Rose reminded us that Australians were killed in the Sudan, before WWI, that Service personnel have been deployed to places as far flung as Somalia and Iraq since Vietnam.

Councillor Rose read selected verses from the poems Anthem to Doomed Youth by Wilfred Owen, In Flanders Fields by Lieutenant Colonel John MacRae and all of The Spires of Oxford’ by Winifred Mary Letts. These he dedicated to two people from Avalon who had served and died in WWI on the Front in France. He emphasised how many young men died in this ‘most terrible of wars’ in prefacing these last chosen verses;

Winifred Letts was going past Oxford, she was on a train, and she looked out there and thought about what had happened to the cream of the young men of her age; where were they? They weren’t at Oxford now:

‘The Spires of Oxford’

The years go fast in Oxford,
The golden years and gay,
The hoary Colleges look down
On careless boys at play.
But when the bugles sounded war
They put their games away.

They left the peaceful river,
The cricket-field, the quad,
The shaven lawns of Oxford,
To seek a bloody sod-
They gave their merry youth away
For country and for God.

God rest you, happy gentlemen,
Who laid your good lives down,
Who took the khaki and the gun
Instead of cap and gown.
God bring you to a fairer place
Than even Oxford town.

The Ode of Remembrance was read by Graham Sloper, the Last Post sounded and the One Minutes Silence observed before  Reveille. Councillor Grace, Mark Houlder and the Vice Presidents of the sub branch all laid Wreaths before everyone was invited to lay flowers, poppies or sprigs of rosemary.

During lunch Peggy Williams OAM, President of the Women’s Land Army NSW gave a short address on her experiences in this vital service during WWII. Her entertaining and humorous anecdotes about not being able to milk a cow, not being able to drive a tractor but forming a rapport with Toby, a Clydesdale plough horse who was ‘her friend’ also gave glimpses of the hardships endured. Mrs Williams was just seventeen when she signed her own papers to join this service. A city girl, like so many of the young women she toiled beside, Peggy was installed in barracks, sheds and tents on showgrounds and local open areas. Every day, sick or not, these women had to go to the farm. They wore uniforms, were confined to Barracks for disciplinary measures and were granted or refused ‘leave’. In every aspect of their lives during this time they lived by the same conditions and rules as those in other services. When they finally heard the words ‘war is over’ it did not mean they could go home. The cows still needed to be milked, the crops brought in. They had to wait until the boys came home and they came home to fully functioning farms solely due to these women. The Nation and all Service people were fed due to the work of these women.

Mrs Williams has been battling for 69 years to gain formal recognition for the AWLA. These women endured service wartime conditions and sustained injuries as a result of their tasks. As Mrs Williams illustrates, she ‘went in fit and healthy and came out limping’. There were no formal health examinations on their release, no counselling then for anyone and none at all for any of the AWLA still. In closing she spoke with feeling of Prime Minister John Curtin stating in 1942 that these women should be formally recognised as a ‘fourth arm of the Services’.

Unfortunately, by the time this proposal got to Parliament the war ended and it was shelved. Mrs Williams related Senator Faulkner has taken spoken in Parliament as recently as 13th of September 2011 regarding the huge contribution these women made on the land and in the factories and his hope that appropriate recognition will finally be given to the AWLA. If this occurs by the 27th of July 2012, which will be the 70th Anniversary of the Australian Women’s Land Army, true recognition of what was a priceless contribution to Australia herself will also be returned to all of us.

Doreen Cherry, organiser for 35 years of the Woman of the Year, asked Danni Sloper to present Peggy with a Royal Medal, an honour given to people for what they achieve. Doreen stated this had been organised ‘to thank Peggy for all her hard work.’

O Lord, lover of souls, who through the mouth of your prophet of old declared that all souls are yours, we thank you for the brave and faithful dead, who willingly laid down their lives on the battlefields of war or succumbed to the perils of the deep or of the air. We bless you for the dauntless courage of those defenders of our country who have fallen in the cause of truth and righteousness. In your hand, O Father, we leave their departed spirits. Grant us to follow their good example in faithfulness and endurance, even unto death, that we may with them be found worthy of the crown of everlasting life. Amen.

Lieutenant Colonel McCrae noticed that, despite the devastation caused by the war to towns, farms and forests, thousands of small red poppies began growing everywhere in Spring. This inspired his poem, In Flanders Fields: 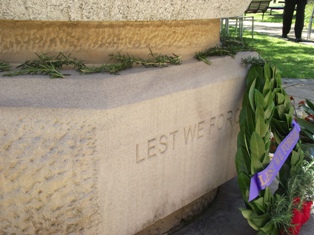